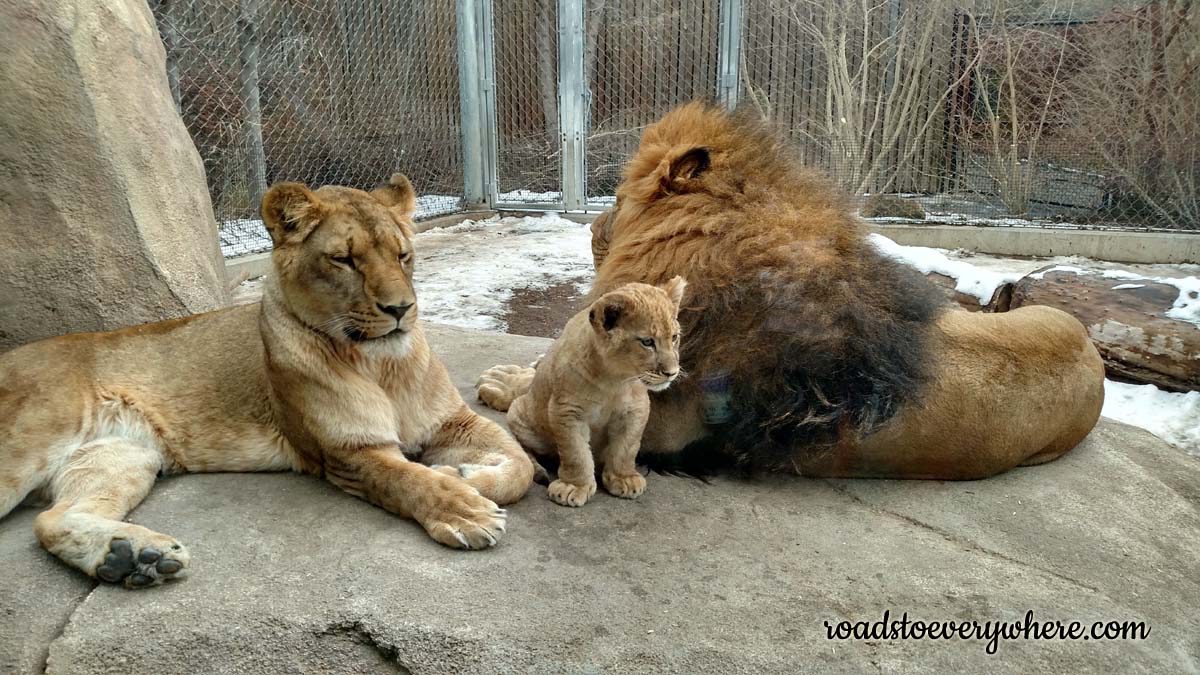 Our gift to the girls last Christmas was an annual pass to the Denver Zoo for 2015. They have enjoyed visiting the zoo several times this past year, but Lyle and I never had gotten around to going with them. Their pass will be expiring soon, and since the weather was relatively nice this past Saturday I suggested that it might be a good day for us to go. The pass is set up in Laura’s name and allows her to take one guest every time (usually Rebecca), plus it came with a single one-time-only guest pass. Since Rebecca is currently in Arkansas visiting her grandparents, the three of us were able to go without paying anything this time. 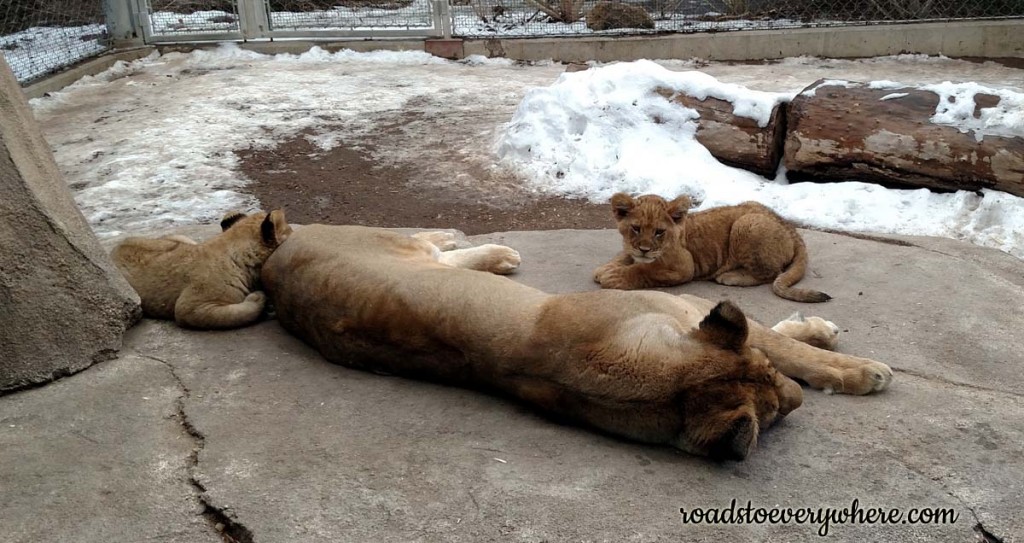 One of the very first exhibits we came to was the lions. There were 3-month lion cubs on a rock with the lioness near the viewing window. Couldn’t you just squee with the utter cuteness of the darling little twins? 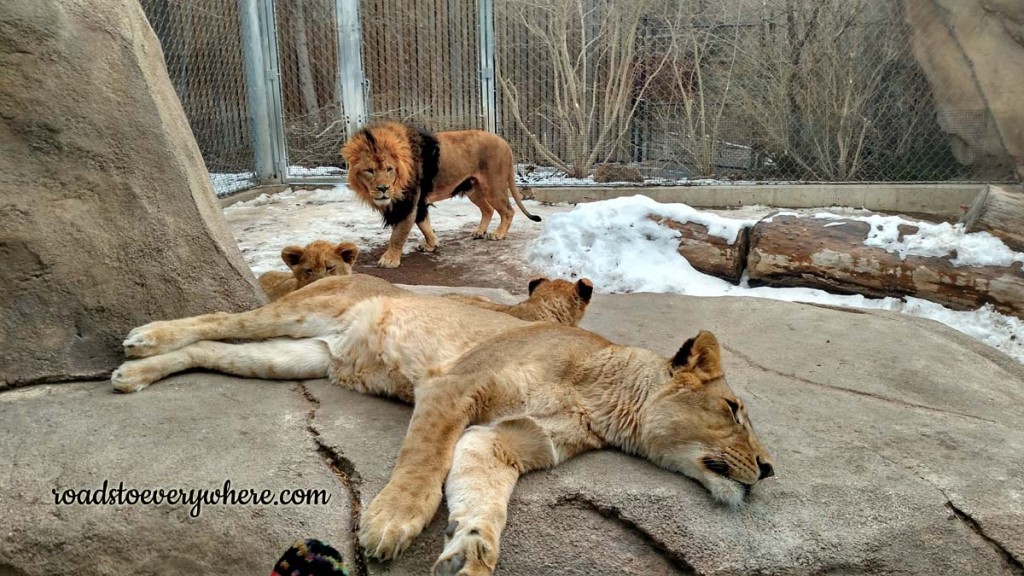 Pretty soon the daddy lion came out. We wondered what he would do. The lioness and cubs were not perturbed a bit as he approached their rock. 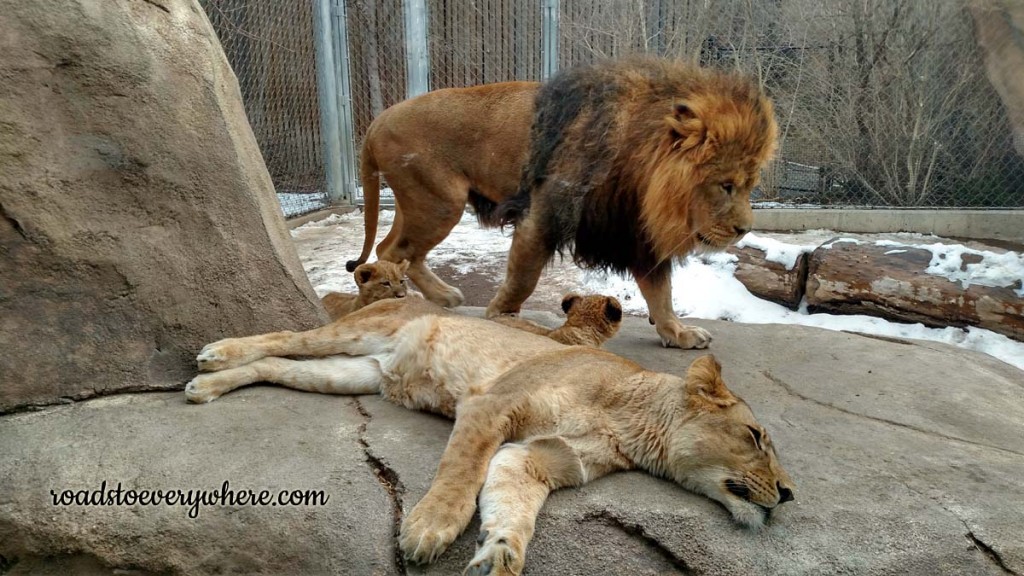 They hardly blinked as he climbed up beside them and settled down. 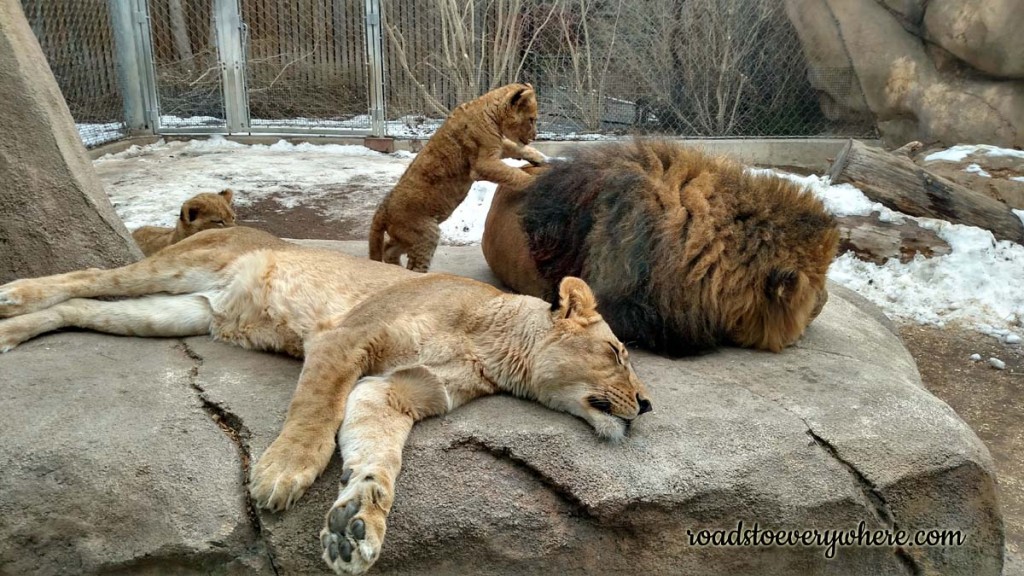 One of the babies tried to get him to play. That’s such an interesting picture to me. We think of the lion as big and scary… and here’s this cute little cub fearlessly climbing all over him. It reminded me of a quote about Aslan in The Lion, the Witch and the Wardrobe:

Who said anything about safe? ‘Course he isn’t safe. But he’s good. 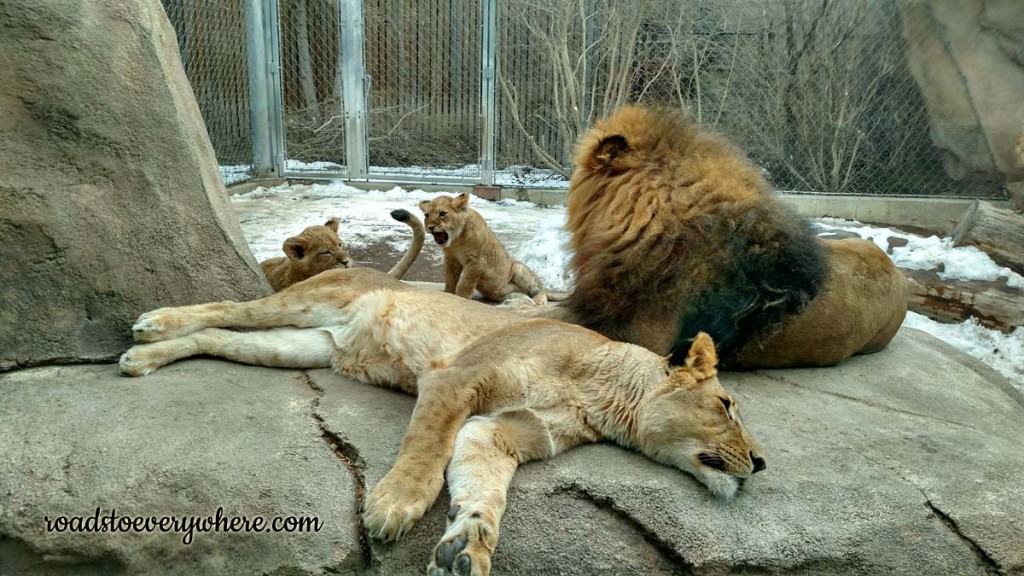 We soon found out why the lion had come immediately to the rock to join his family. A zookeeper standing nearby told us that the rock is heated! See the snow on the ground in the background? Wouldn’t you want to be on the nice warm rock if you were a lion?

We also learned that the lioness with the cubs was actually not their mama. She is the “auntie” and was babysitting. 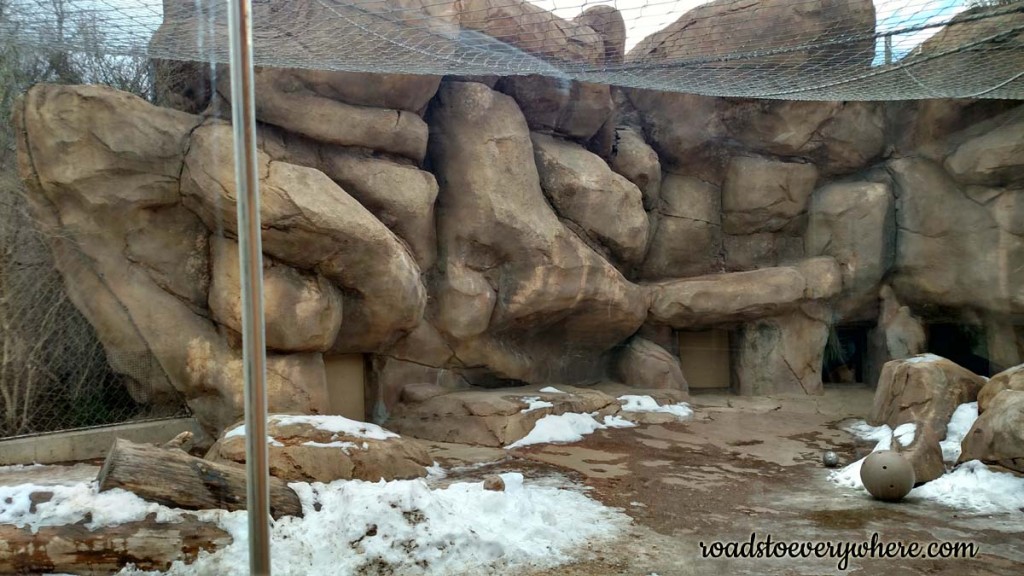 Mama was in the middle doorway at the back of the pen taking a break. We could just barely see her head. 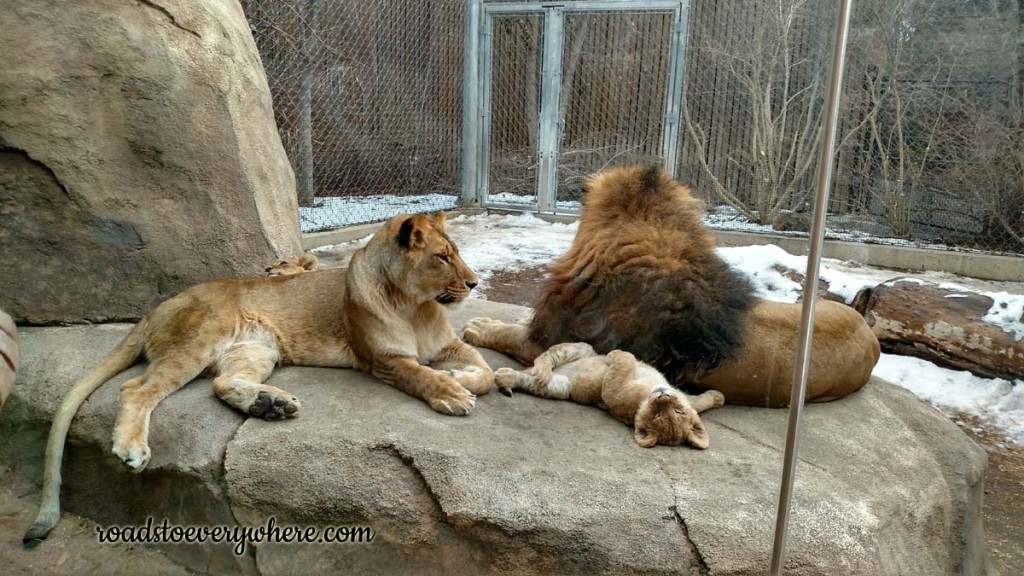 The little lions were so cute I could have stood there all day snapping pictures of them, but we had a limited amount of time. So we moved on.

Don’t worry, I’m not going to show you pictures of every animal we saw. You’ve been to the zoo before. But there were a few other fun things worth telling about. 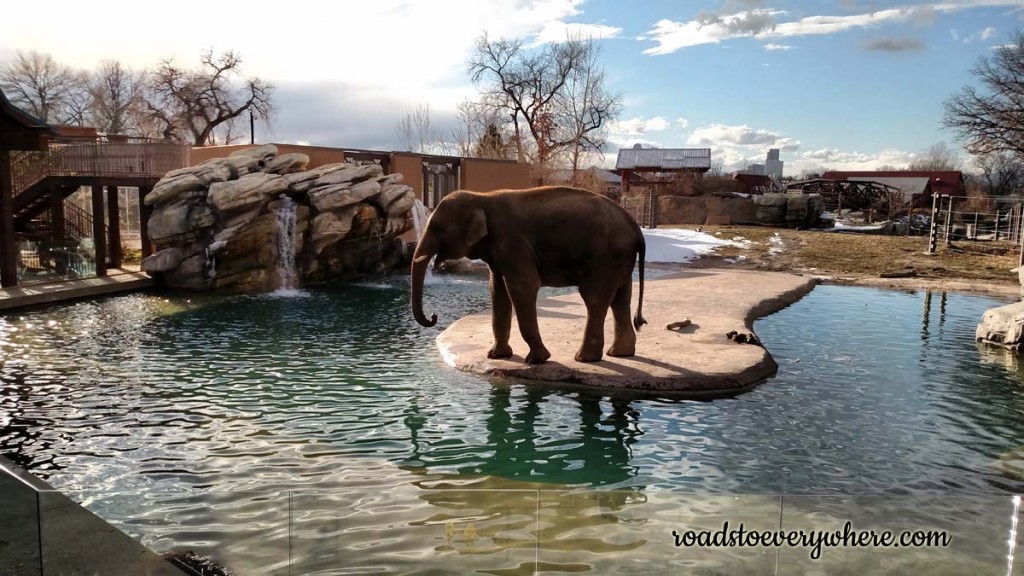 Here are some of his brothers.

Just kidding. I made that up. The signs for the Toyota Elephant Passage made it sound like Toyota was a type of elephant. Made me laugh.

While we were in the Asian part of the zoo Lyle and I posed in the Asian taxi. Our photographer (aka Laura) informed us that passengers fraternizing with the taxi driver was frowned upon. We didn’t care. 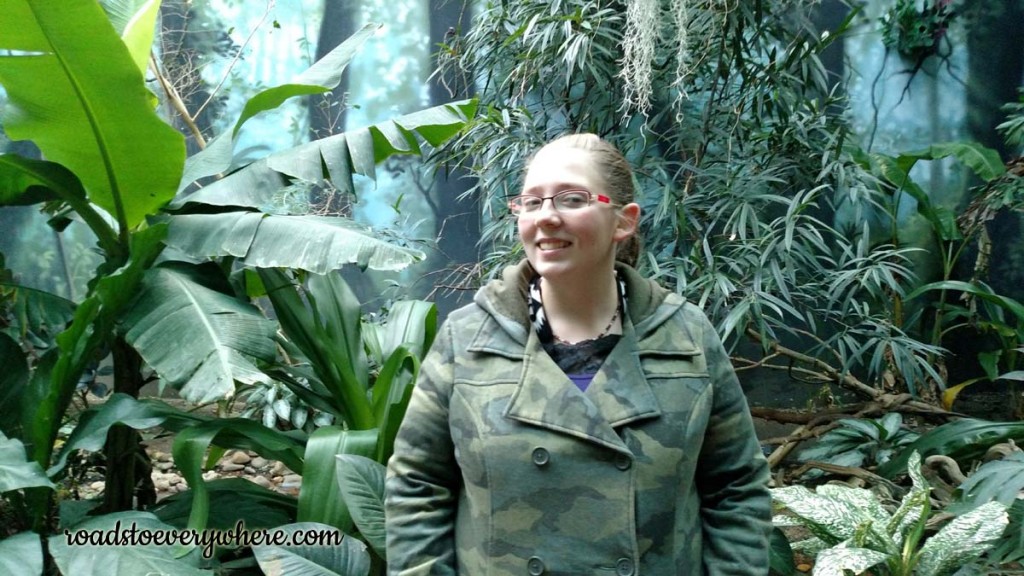 Later, I took a picture of her in her camo jacket blending into the rain forest. Look close. Can you see her?

Then we had to test our jumping skills. Lyle ranked up there with the polar bear at 5 feet. I think I was back with the mouse at 2 feet or something. Plus, I did not “stick the landing” like Lyle did. 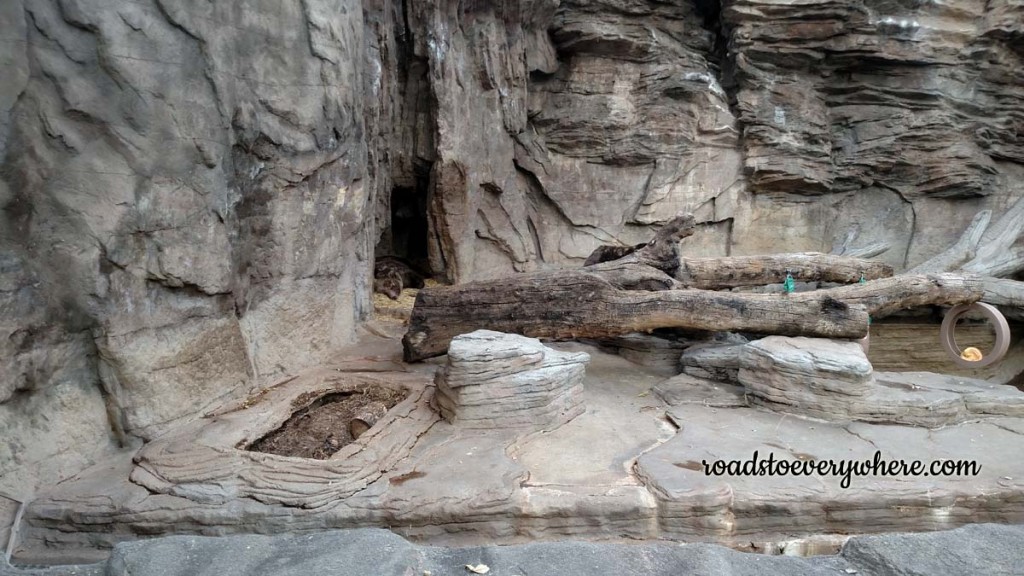 The bear appeared to be hibernating in his den. We could see his sleeping head. I don’t know if there was more than one bear or not, but I found the history of their habitat fascinating. 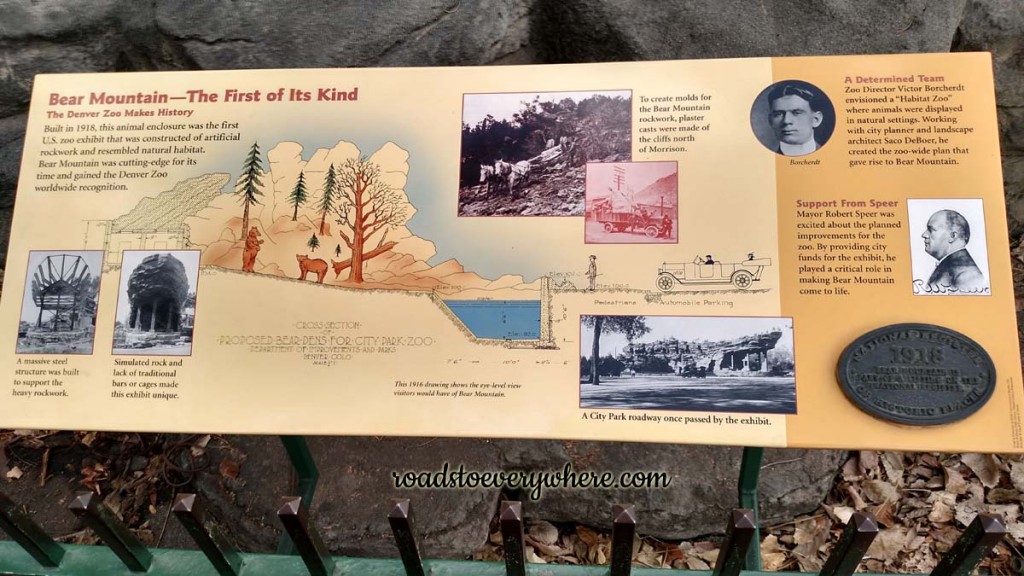 I hadn’t realized the Denver Zoo is nearly 100 years old. Or at least the bear exhibit is, which may be where the zoo started. I thought it was interesting how you could originally drive right up to it in your “automobile.” 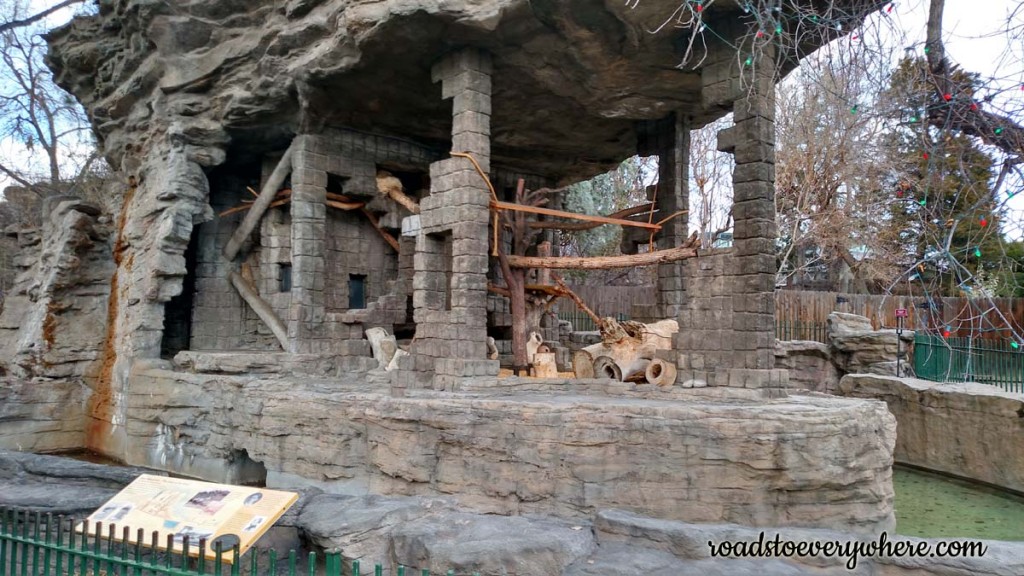 Isn’t it a neat structure? I liked how they made plaster casts of nearby cliffs to use in the design.

Several areas of the zoo were closed for the season. We didn’t mind because that meant it wasn’t as crowded as it is during the warmer months. We observed the signs that said “Please do not enter.” Apparently, the peacocks can’t read. Or they just assume the rules don’t apply to them. Which apparently they don’t, since the peacocks showed up in all kinds of weird places all over the zoo.

Well, I’ve kept you plenty long enough, so that will conclude today’s guided tour of the Denver Zoo. Before I go, just one more picture of the irresistibly cute lion family… 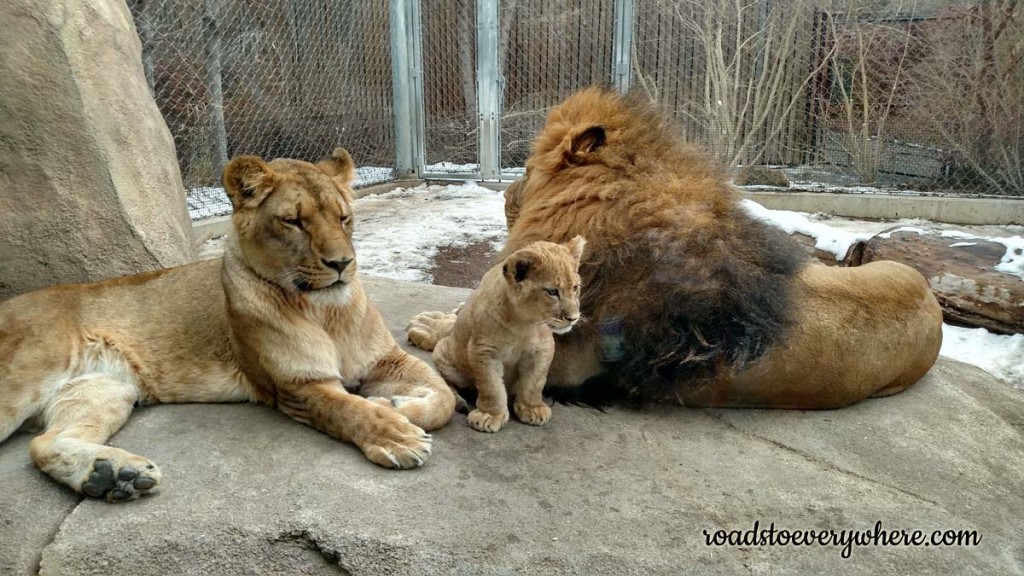