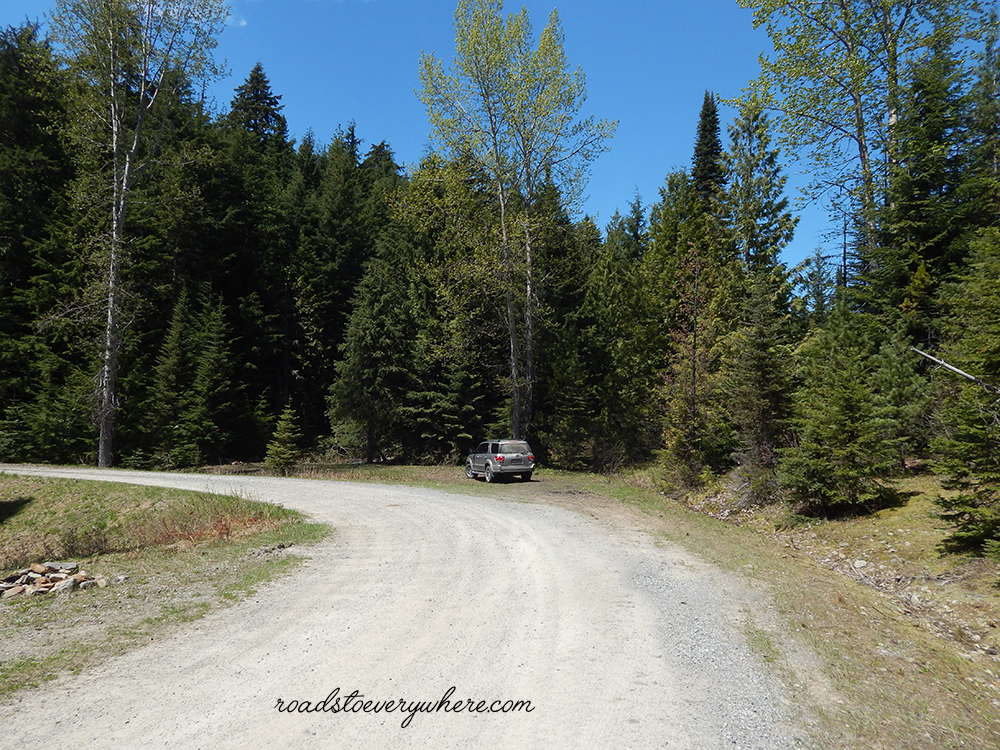 One of the items on our “spring bucket list” was a geocaching day trip. We decided to get that in over Memorial Day weekend. Lyle is in charge of planning these outings for us, so he planned a route to take us north of here to visit a couple of new-to-us waterfalls as well as hit a few caches. “Visit a waterfall” is also on our list, but we had already accomplished that so this would be a bonus.

We chose a day that Laura had off work, packed a picnic lunch, and headed up to the tip-top portion of the Idaho panhandle. None of us have passports so we knew we wouldn’t be able to cross the border into Canada, but the geocaches and waterfalls Lyle had picked out were on the US side anyway. 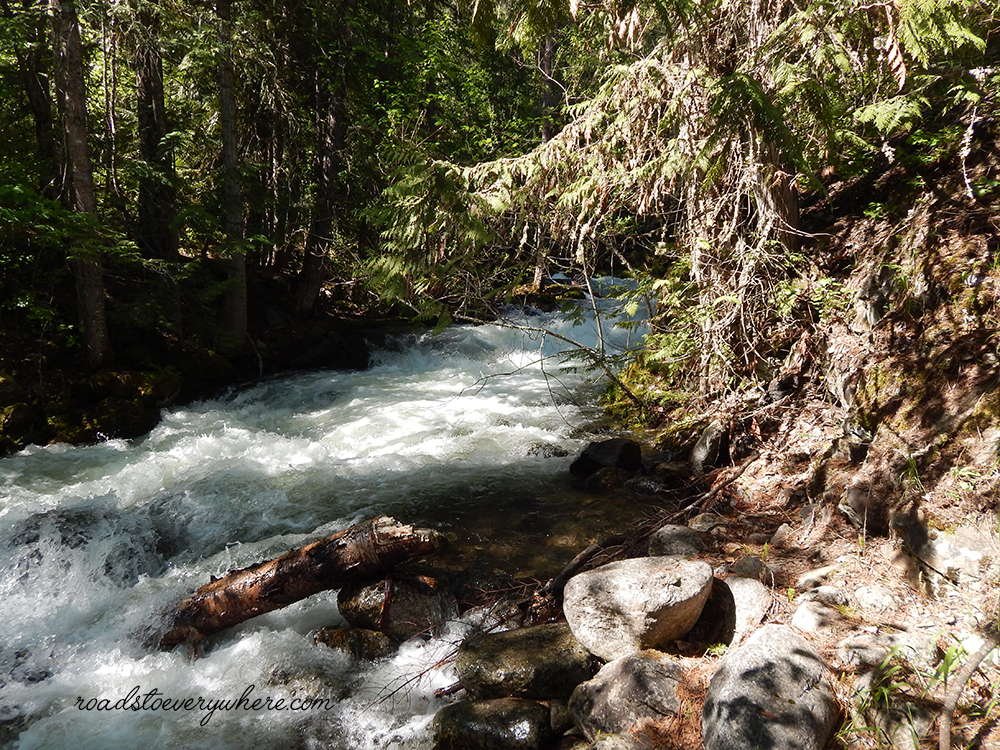 The first cache of the day took us on a little hike along this rushing mountain stream. The girls dipped their toes in and declared the water to be icy cold. 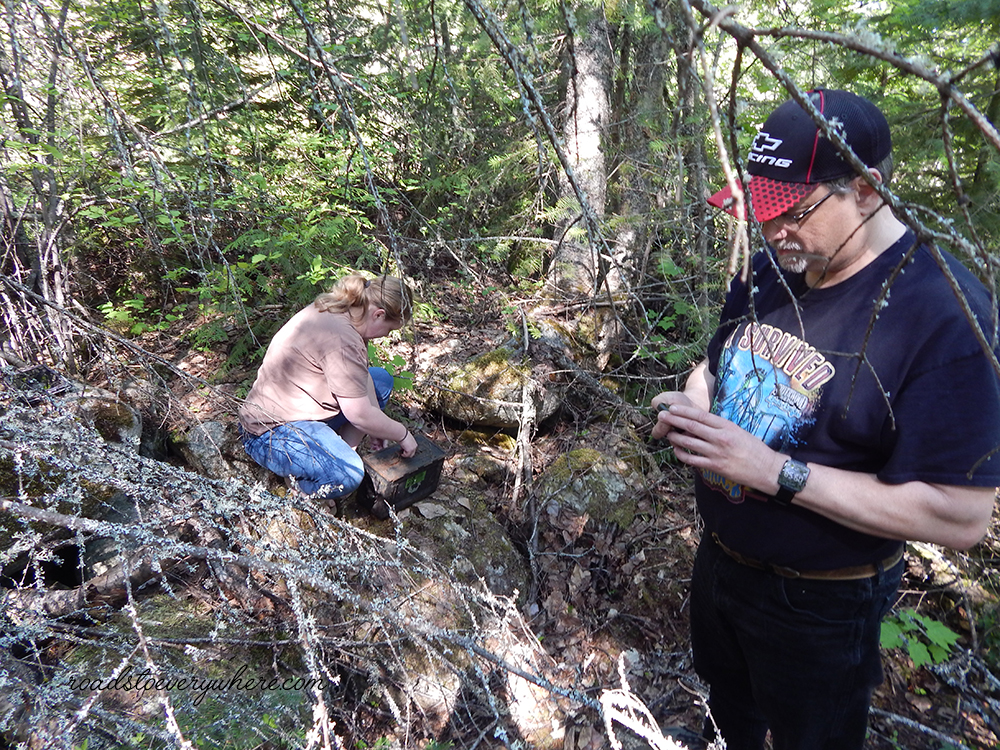 Rebecca found that cache hidden under a rock and some branches. It’s always interesting to see what’s in the cache container, but the girls aren’t as interested in trading swag as they were when they were younger. Either that, or the cache contents around here have degenerated to mostly junk. Probably a little of both. In any case, for us the fun is the hunt and the “Score!” when we find it. 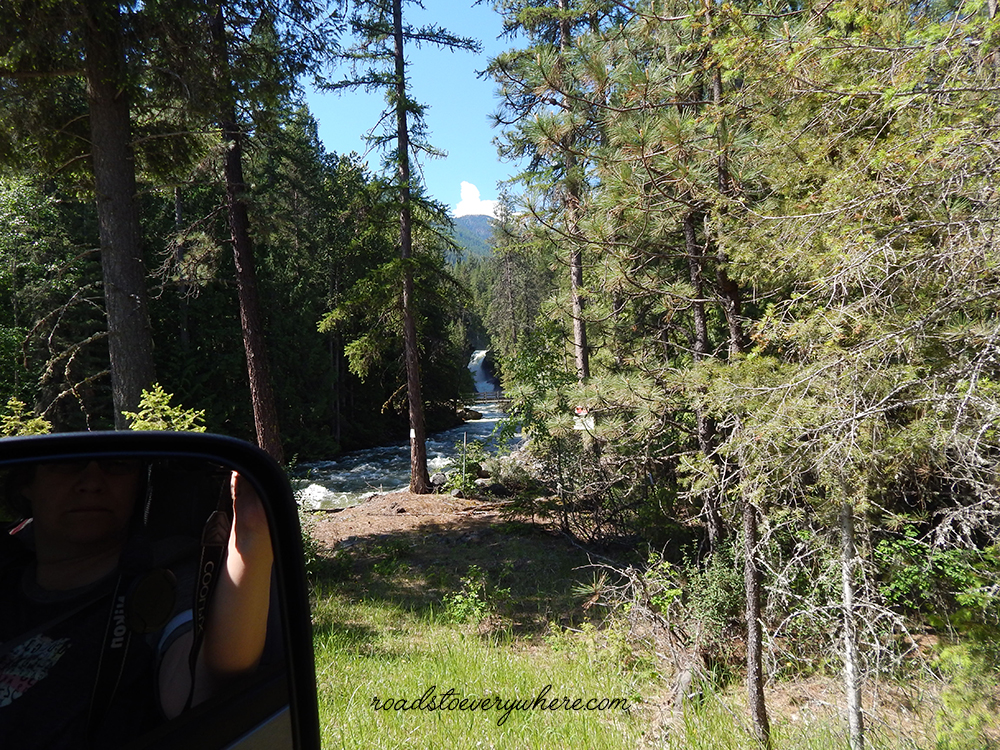 Lyle has a copy of Waterfall Lovers Guide: Pacific Northwest that he uses to plan a lot of our day trips. Unfortunately, his copy is several years old so the information is sometimes out of date. The book said that this waterfall is on private property but open to the public. It cautioned to be respectful of the private property so that it could stay open. Apparently at some point someone wasn’t respectful because sadly, access to the bridge we could see from the main road was gated off. So that’s as close as we got to that one.

Can you imagine, though? Having a waterfall on your private property? I don’t know if I would want it open to the public if I were the property owner. 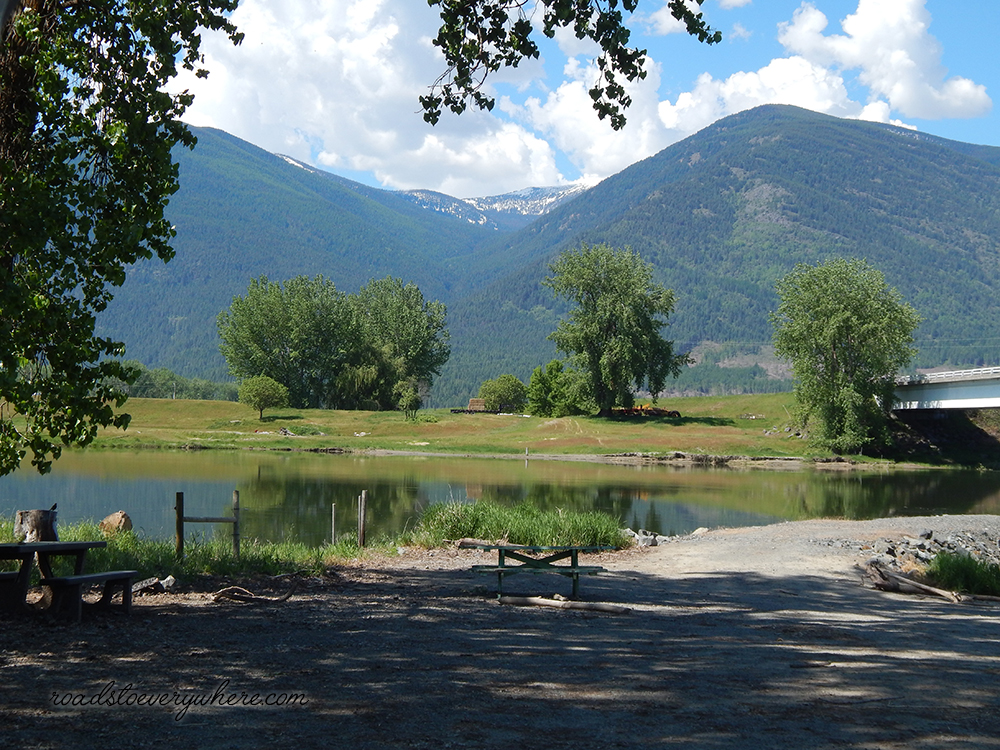 We stopped for a quick break and a snack at this beautiful spot. 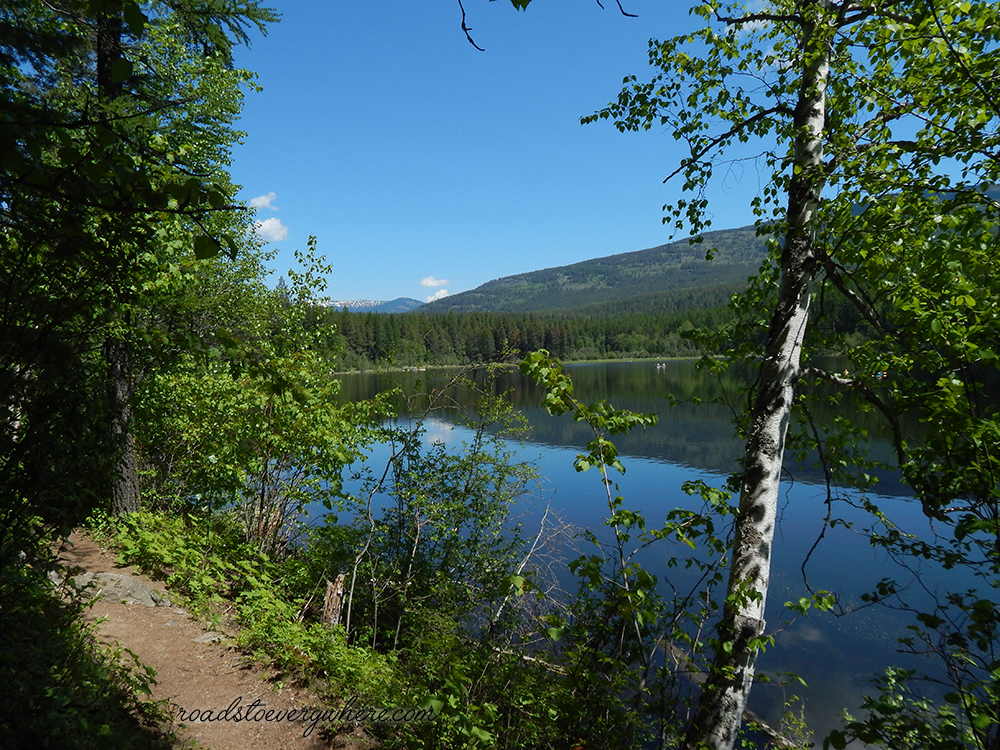 Another cache took us on a hike along this pristine lake. Looks like a good spot for fishing.

According to the GPS the curved of this road practically touches Canada. So we stopped to see what the Canadian border might look like in the backwoods. 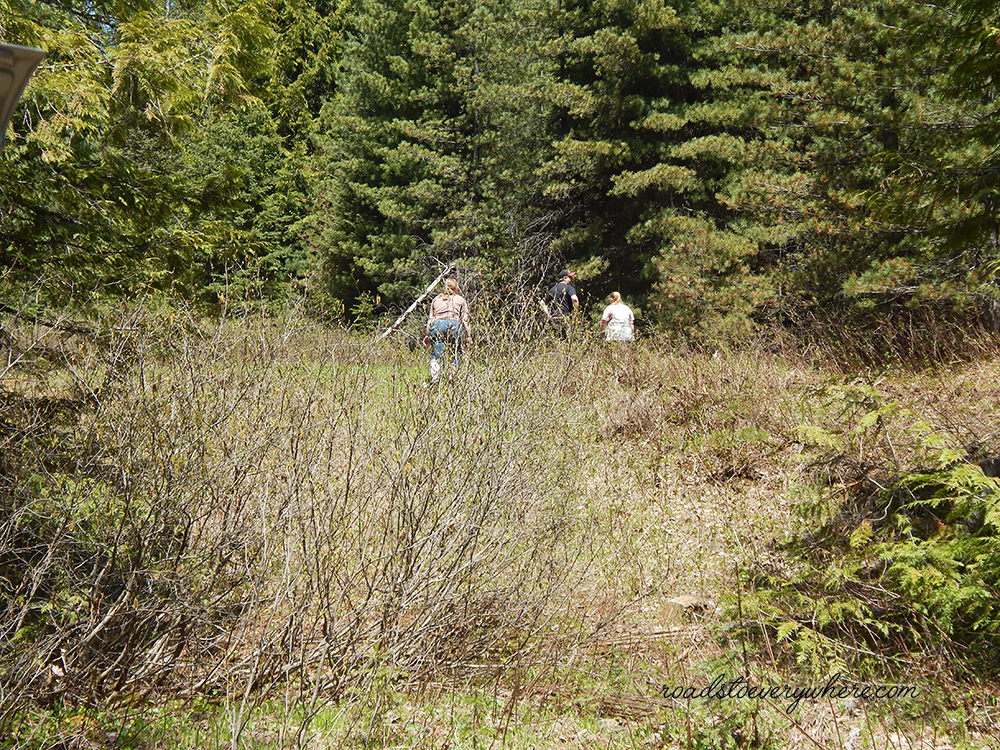 Lyle and the girls decided to see if they could tell where the border actually was. We knew there wouldn’t be a fence, but we thought maybe there would be a clear-cut line. Truth be told I think they wanted to see how easy (or hard) it would be to “sneak” into Canada.

They came back in a few minutes and said they were in a clearing that they thought might be the border. Later Lyle looked it up on Google Earth and it turns out that they didn’t go quite far enough. There is a clear-cut line but it’s more distinctive than where they were.

Laura asked what would happen if they kept going and actually ended up in a Canadian town. First of all, the closest town would be a long hike from there but I told her if she did manage to do it, I didn’t think anything would happen until she tried to come back to the US. Or actually, she’d have to “sneak” back the way she went. I doubt a Canadian Mounty would stop her on the street and ask to see her passport. But it was a funny thought. 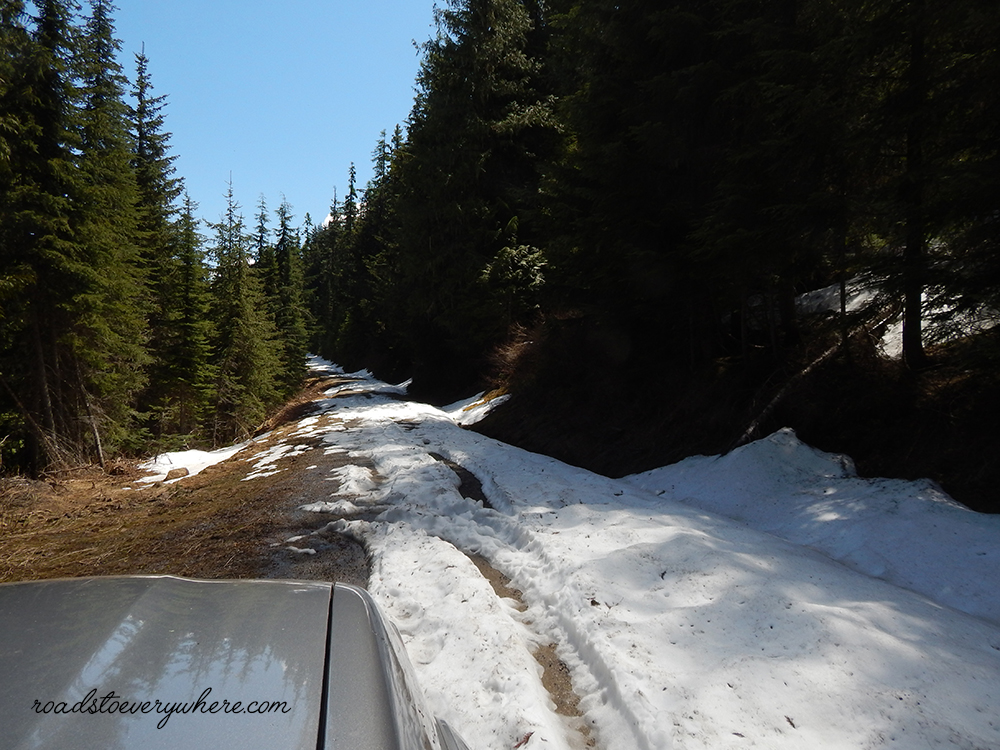 After the excursion to Canada we followed the road on around the curve, back down into the US, en route to another waterfall. But we were turned back by snow on the road. We got stuck in the snow on a mountain road in May several years ago, so we’ve been extra cautious about that since.

I guess it’s a good thing we had already fulfilled our waterfall quota for the spring because we sure didn’t have much luck with them that day.

And we had a lot fun.