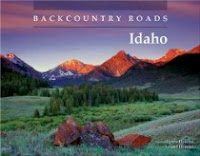 My family celebrated the Fourth of July with a scenic day trip up in the very tip-top of the Idaho panhandle. At one point, we were so close to the Canadian border that the girls worried that we might “get in trouble” for not having passports! For Father’s Day we had given Lyle a copy of Backcountry Roads Idaho which maps out detailed “expeditions,” complete with GPS coordinates, on some of the very scenic backroads all over the state. For this holiday weekend, Lyle decided on “Expedition 2” to Moyie River, Copper Falls, and Purcell Mountains. He also planned in a few Geocaches along the way.

It was a cool day (temps in the 60s) with clouds threatening rain most of the day. Sunshine would have made better pictures, but memories aren’t dependent on weather! Care to go along? 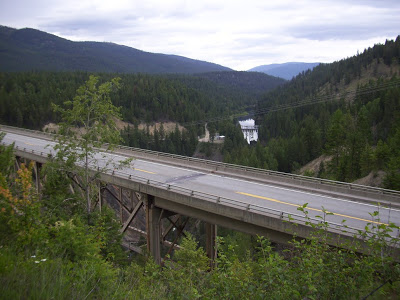 The official starting point of the expedition was at the overlook of the Moyie River Canyon Bridge. This is about an hour-and-a-half from where we live. 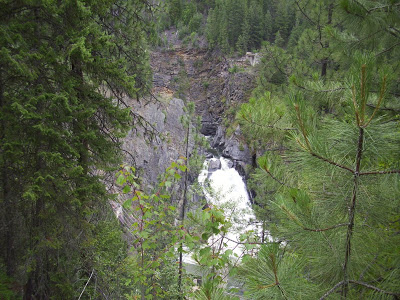 We immediately took a little side-trip to get a closer look at the dam spillway further up the river. I mean, what’s the point in an “adventure” if you stick to the guidebook all the time, huh? 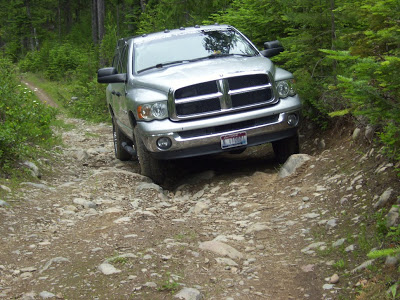 The next little side-trip was listed in the book as “optional.” It was a 4WD-only spur road, leading to a “great view of the river.” River view aside, I think the Man enjoyed bucking his big truck up over the rocks more than anything. I can’t say for sure, though, as I had my eyes squeezed tightly closed for this portion of the expedition. 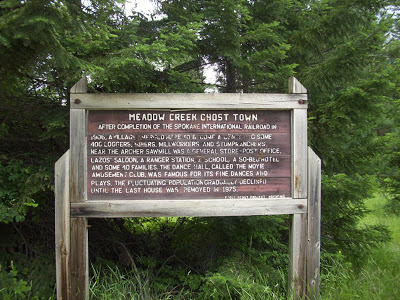 We had hopes of exploring a “real live” ghost town at Meadow Creek, but since the last building came down 35 years ago, there really wasn’t much to see… 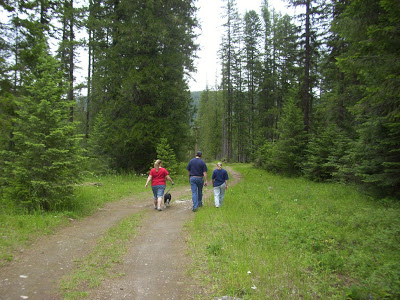 …with the exception of a dirt road and grassy meadows filled with wildflowers. 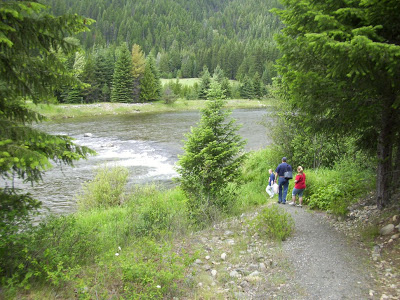 We ate lunch at the Moyie Crossing Picnic Area (and hunted for a Geocache there for awhile that we never did find). Then it was on to Copper Falls, the climax of the day.

We hiked about a mile to get to the falls. That’s when we were glad the day was cool. Most of the hike was through a heavy forest, so it probably would have been pleasant enough even on a warmer day. In any case, the spectacular falls was well worth the effort. 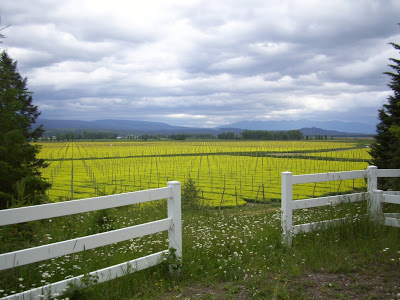 We chose another “nearby excursion” from the book as our route home through the Kootenai Valley. Other times we’ve been in this area we had wondered what the bright yellow fields were. We learned from the book that they are hops fields, and that Kootenai Valley contains the largest contiguous hops fields in the world. We still weren’t sure what hops were, but Lyle speculated that he thought hops were used to make beer. When we saw a sign stating that this farm belonged to Anheuser-Busch, we decided that he must be right!

It was a wonderful day for memories!