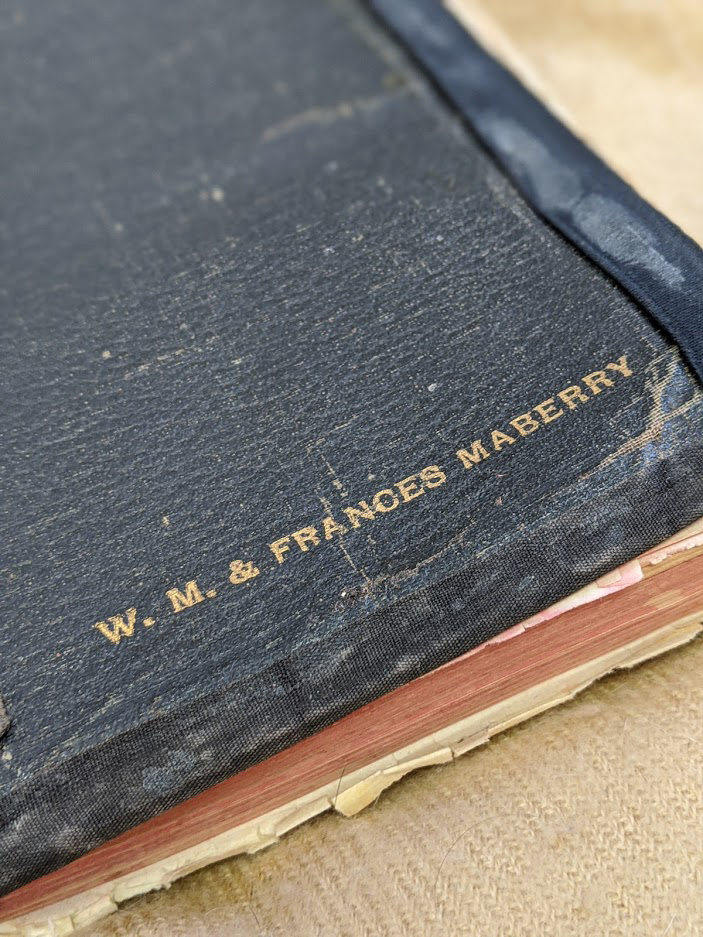 “You’ll be getting a package in the mail soon,” my mother told me last fall.

Mama ‘Berry was my great-great-grandmother who lived from 1872-1949. I mentioned her last year when I interviewed my newly discovered author cousin who is also her great-great-granddaughter, and briefly in this post from 3 years ago about Mama ‘Berry’s mother who prayed for her children.

Mama ‘Berry’s real name was Martha Frances Bock Maberry. She was married to William Marshall Maberry in 1888 in Texas. They were my Grandmother’s maternal grandparents. They had lived in different parts of Texas and Oklahoma while they were raising their family, but after their five daughters were married and settled in Oklahoma they moved with their remaining son to California. That was in 1918. Grandmother was a year old.

Later, in the 1930s, when Grandmother was a teenager, she and her older brother made a trip to California to visit them. She said that was the only time she was ever in their home, though they had been back to Oklahoma for visits during the ensuing years.

So how did I come to be privileged to inherit the Bible? It came about like this:

My great-grandmother, whom we called Mother Shumaker, was Mama and Papa ‘Berry’s oldest child. She lived from 1891 to 1982. I was 16 when she died and I remember her well. I’m assuming she first inherited the Bible after Mama ‘Berry passed away in 1949.

From there it apparently was passed to her son, my great-uncle Elbert, who was a Methodist pastor in Oklahoma for many years. After he passed away a couple of years ago his wife, Aunt Carolyn, sent the Bible to a cousin, Wendell Maberry, in California who is another grandson of Mama and Papa ‘Berry’s.

Wendell enjoyed having it for awhile but then he decided he’d like to go ahead and pass it on to someone else who would appreciate having it and would take care to preserve it for future generations. Since he knew I’ve done a lot of genealogy work and was interested in family history he decided I would get to be the new caretaker of the Maberry Bible. He asked Aunt Carolyn for my address, who then told my mother about it, which is why she knew I’d be getting a package in the mail.

Sure enough, a few weeks later, after I had almost given up hope, a package came in the mail. I knew immediately what it was. I may or may not have let out a little “Squee!” (I embarrass my children sometimes.)

As you can see, it was never a “nice” Bible as we think of top-quality leather-bound Bibles now. The cover has been repaired with black tape around the edges and the inside of the cover is cracked and peeling. It is well-used which makes it more valuable, in my opinion, because it reflects the heritage that has been passed down through the generations.

Naturally I was interested to see what might be inside the Bible. This advent reading plan is from 1959. That must have been Mother Shumaker’s since the Maberry grandparents were gone by that time.

These little snippets of scripture references are written in fading pencil on a strip of what appears to be construction paper. I wonder whose handwriting that is.

This list of the “Mericals” of Jesus might be the same handwriting. I would love to know why the miracles were significant to whoever wrote them out.

That was all ephemera that was tucked into Mama ‘Berry’s Bible. I had hope there might be some Family History pages, but there weren’t.

However, there were actually two Bibles in the package from Wendell. The other one belonged to Granddaddy and Mother Shumaker, the next generation. And it does have Family History pages. I’ll show you that one next time.

They’ve said I could have them “when there’s passin’!” By that they mean, “I’ll give it to you when I see you, or send it with someone I know will see you.” Do y’all say that?