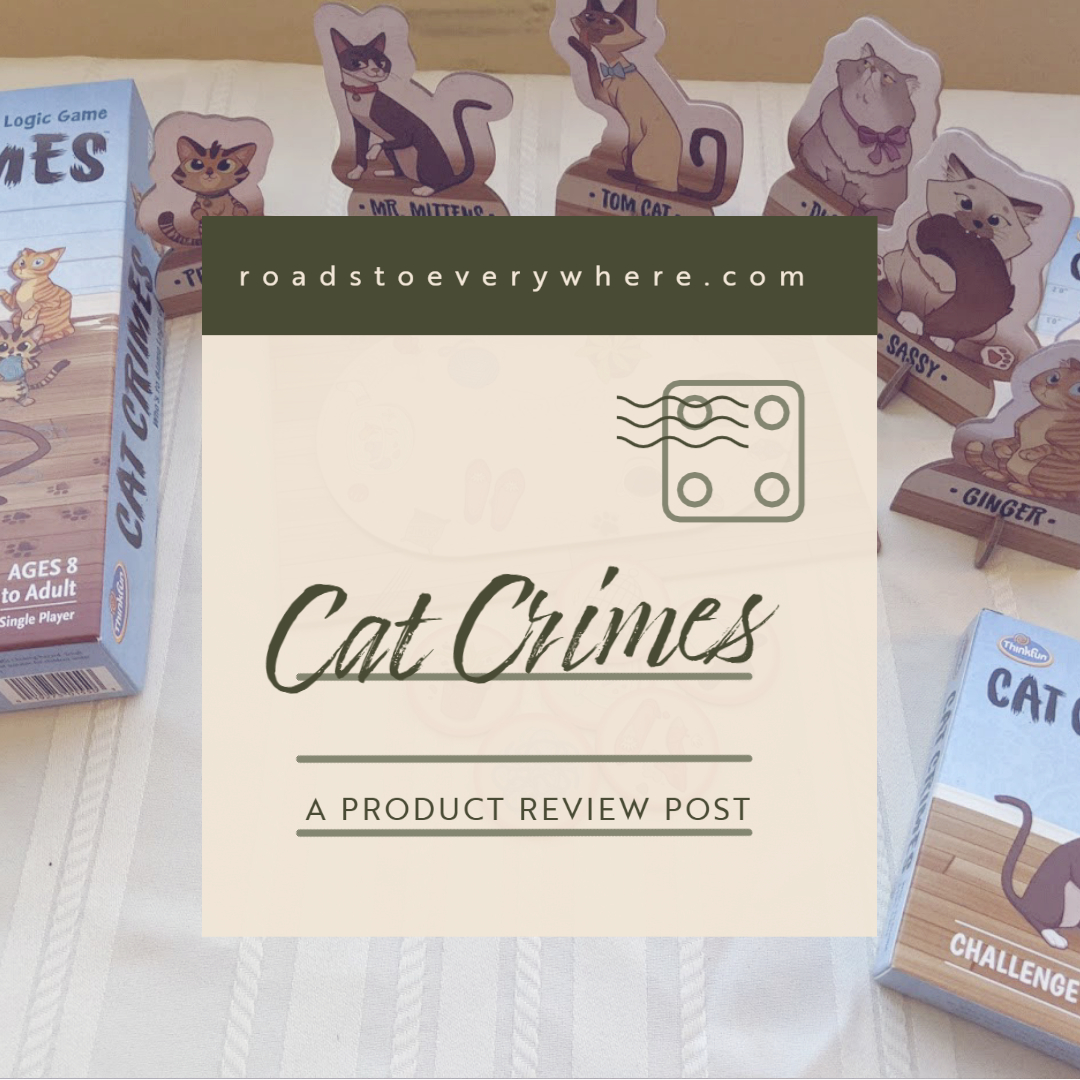 Oh, no! A Crime has been committed! Someone has ruined my good red dress shoes!

“How is that a crime?” you might ask. Good point. Ruining shoes is not against the law, that I know of. But play along with me. It’s just a game, after all. Didn’t I mention that? Well, it is.

I need your help to figure out whodunnit. Based on the obvious clues surrounding the ruined shoes it’s pretty evident that a cat committed this Crime.

That’s actually a given. All the Crimes in this game were committed by a cat. The question is, “Which cat?” Well, let’s meet the suspects.

There is a dossier for each cat which is completely unnecessary to game play but adds so much fun as it gives each one an in-depth personality. The artwork goes a long way toward showcasing the personalities of these cute criminals and the descriptions enhance the pictures. The attention to detail provides an extra layer of imagination and pretend to this creative logic game.

Besides the cats and Instruction Booklet the game includes a game board the living room floor with several items depicted that the cats just can’t leave alone. There are also 6 round Crime Tokens and a deck of Challenge Cards.

The Challenge Cards show what Crime was committed and offer clues as to the current culprit. The first step is to cover the pertinent object with the matching Crime Token.

Then comes the challenging part: determining where each cat was when the Crime was committed. Because the one sitting in front of the damage is obviously the one who did it. These criminals never flee the scene of the Crime.

So we moved them over to the side on top of the game box for their naps. Good alibi there.

“Tom Cat was sitting in front of catnip & a sock.”

There’s only one place on the floor where catnip and a sock are next to each other so that’s where we placed Tom Cat. That also puts him in front of the house plant, not the shoes, so we know he’s not guilty.

“Sassy was sitting across from Tom Cat.”

That puts her next to the shoes but not in front of them, so she’s not guilty either.

“Ginger was sitting next to the fish bowl.”

This is the tricky clue. Ginger is not in front of the fish bowl so she’s not at the end of the rug, but based on this clue alone she could be on either side. How do we determine which side? We’ll set Ginger aside for a moment and look at the next clue.

“Duchess was sitting to the left of Sassy.”

Since we already have Sassy in place we know where Duchess goes which makes it obvious that she is our culprit. And since it’s good to know where all the cats are we can now put Ginger in her place as well.

Of course, we could have just skipped the clue about Ginger and been able to solve the Crime, but we didn’t know that until we had worked through all the clues.

We just solved Beginner 1 of the Crime Cards. Did you notice how we only had 4 Cats in play? That made it easier. The Challenges get harder as you go along.

Cat Crimes is labeled as a single player game and it can certainly be played that way, but we find it more fun for two of us to work through the clues together.

I purchased Cat Crimes from Timberdoodle which is my favorite place to find critical thinking and logic games. Check out my previous reviews and watch for more coming soon.