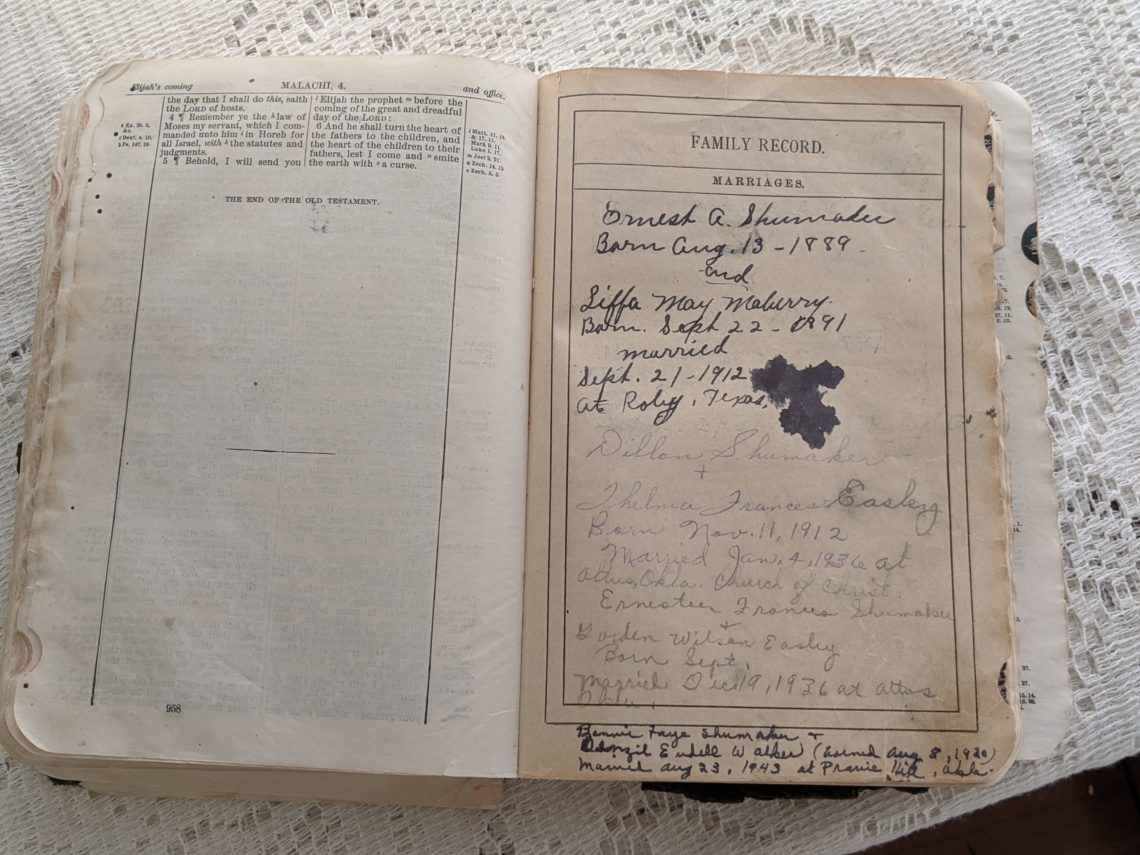 The second family Bible I have inherited belonged to my great-grandparents, Ernest and Liffa Shumaker. It is even more tattered than the older Maberry Bible.

The spine is split down the middle and the cover is literally disintegrating. Also, the first few pages are missing.

However, much to my delight, this one does include Family Record pages between the Testaments.

The first entry on the Marriages page, in Mother Shumaker’s handwriting, records her marriage to Granddaddy Shumaker.

The next entry is in my Grandmother’s handwriting and records the marriage of her older brother.

The third entry is in Great-Aunt Bonnie’s handwriting and records the marriage of my grandparents.

A few years later, during World War II, Aunt Bonnie recorded her own marriage in the Family Bible.

I guess since that’s all the room there was on the Marriages page those are the only marriages that got recorded. The other brothers did eventually get married but their marriages aren’t listed.

The Births pages were filled in by Mother Shumaker, probably all at the same time, with the exception of the twins who were the youngest in the family. That indicates to me that Mother Shumaker and Granddaddy probably got this Bible sometime between 1923 and 1931… or maybe that’s just when she got around to filling in the Family Record pages.

The page on the left lists “E.A. Shumaker’s Family” (i.e. the children of Ernest and Liffa Shumaker):

The Births page on the right lists “Brothers & Sisters & Mother” of Ernest Shumaker. I find it interesting that his name is listed as “Albert Ernest” but his initials were always “E.A.” and then he named a son Elbert, rather than Albert.

The Deaths page of the Family Record was never filled in, even though everyone listed on the previous pages is now dead. Maybe this Bible had fallen out of use by the time anyone died. Or maybe they just weren’t inclined to record the deaths. I mean, I guess I could fill them in myself… but I probably won’t.

The one bit of ephemera tucked into this Bible is this undated newspaper clipping about the Midway School where my grandparents went to school. I don’t know what the “intellectual events” may have been but I’ve heard that Grandmother was the pitcher for the girls softball team when she was in high school. If Granddaddy was on the baseball team I never heard about that. I’ll have to tell you about Grandmother playing softball another time.