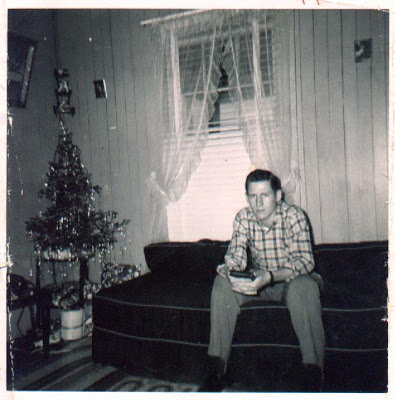 As I was looking through some old pictures, I came across this one of my dad when he was a teenager. He was probably 17 or 18 in this picture, and it was obviously taken in December. It was probably not too long before he went away to Bible college. (Or maybe he was home from college for Christmas break.)

What I love about this picture is how young he was, yet he was already committed to following God’s will for his life. It took a lot of courage for him to leave his home in Louisiana at age 17 and travel by train to Illinois to put himself through Bible college. But he did it because he felt that’s what God wanted him to do. It was after he had been at college for a year or two that he received God’s call on his life to become a pastor.

Through the years Dad has never wavered from that early commitment to stay in the center of God’s will. There have been hard times, but there have been many blessings, too. As his daughter, I am so appreciative of the Godly heritage he and Mother have given me. I am trying my best to pass that heritage to my own children.

Happy birthday, Daddy! I love you!