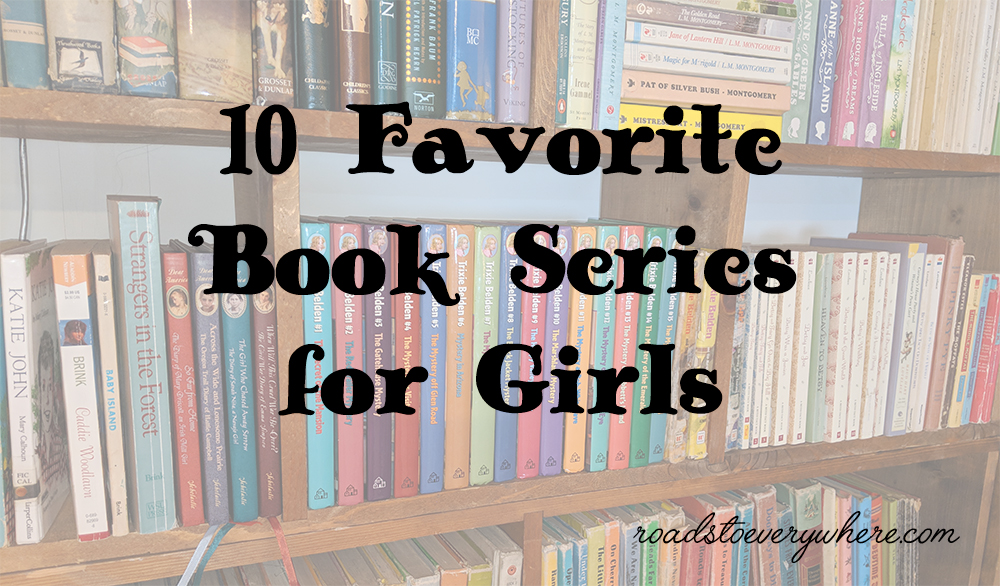 I learned to read independently when I was 7 years old and I’ve pretty much had my nose in a book ever since. This week when a friend asked for some series book recommendations for girls ages 8 and 10, my mind went back to my family’s weekly library visits in the 1970s.

I can’t remember if our public library had a limit on how many books we were allowed to check out at once or if my mother established the limits. Either way, I always read all of my books and all of my four siblings’ books before the next trip to the library the following week. It seems like we had a limit of 3 books per person, which gave me 15 “new” books to read each week, including a fair share of picture books since my siblings were younger.

My favorites were, of course, the books I got to choose, which were invariably series books. Once I found an author I liked I immediately checked to see what else the library had by that author and then I would read them all.

When I started jotting down girl’s series books for my friend this week I couldn’t seem to stop, so I’m going to limit this list to books I remember reading when I was between the ages of 8 and 10, which are currently in print. That means they have stood the test of time. Your library probably has most of them.

Disclosure: The links below are affiliate links to Amazon where I might earn a small commission should you choose to purchase.

Little House on the Prairie

By Laura Ingalls Wilder. Set in the 1870s. This is the first series of books I ever read. My mother had started reading them aloud to us before I started school. Once I learned to read I couldn’t wait to read them for myself. I read the entire series the summer between 1st grade and 2nd grade. I have read it numerous times since.

By Maud Hart Lovelace. Set between 1897-1917. The first four books in the series are for and about younger girls, while the remaining books are about Betsy’s teen and young adult years so would probably be more of interest to older girls.

By Lois Lenski. Set in the early-to-mid-1900s. Some are about girls. Some are about boys. What I love about them is that they depict regional lifestyles around the country as they were before television homogenized a lot of the cultural differences between regions. I’ve been trying to collect them for my personal library for several years. So far I have five. They have been hard to find. However, I discovered most of them are now available on Kindle.

By various authors. Biographies focusing on… well, the childhood of famous Americans. They had orange hardback library bindings when I was reading them in the mid-1970s. I have a number of them in my personal library now, discards from a public library–about half orange, a few blue, and several multi-colored covers. Many titles are still available in paperback or digitally. There are way too many to list.

By L. Frank Baum. Most everyone has read and/or seen the movie The Wonderful Wizard of Oz. What you may not know is that there is a whole series of books about the Land of Oz. I read them in 3rd or 4th grade. The illustrations are fun. These books are apparently now in the public domain because you can download the e-books for free (linked below).

By Beverly Cleary. Set in the mid-to-late-20th-century. Classic childhood novels about neighborhood children in Portland, Oregon. I finally got to visit that neighborhood last fall!

B is for Betsy

By Carolyn Haywood. Set in the mid-20th-century. These are great for young readers transitioning into chapter books. There’s the Betsy series for girls and the Eddie series for boys, though I read them both, as well as other non-series books by the same author. Several of these are out-of-print.

All of a Kind Family

By Sydney Taylor. About a Jewish immigrant family in the early 1900s. I remember the library books of this series had beautiful full-color covers.

By Julie Campbell or Kathryn Kenny. This was my favorite “girl sleuth” series. I would put this series on the upper end of this age range–probably 5th to 7th grade. There were 39 books in the series. I’m not sure how many are currently in print.

By L.M. Montgomery. I hesitated about including Anne on this list because I discovered her when I was about 13 or 14, and I’m not sure I would have enjoyed her as much at age 10 as I did later. Most of the books in the Anne series would be more of interest to teens or adults. However, the first book in the series, Anne of Green Gables, is a classic for older girls, and Book 7, Rainbow Valley, focuses on the childhood of Anne’s children, so it would probably appeal to younger readers as well.

What series do you remember reading when you were in school?