All my life I’ve had an inclination to write. Before I could even read I would sit at the kitchen table asking my mother to spell the words for me so I could write letters to my grandmother. When I finally learned to read and spell I expanded my correspondence to include several pen pals during the course of my growing-up years. My mother was (and is still) convinced that I would write a book when I “grew up.” I have been open to the idea all this time, but I haven’t had a story to tell yet, so other things have taken priority. For 18 years I published a monthly family newsletter, and then for the past 8 or so years I have been blogging. That’s been the extent of my writing up until now.

Just about a year ago, I felt the Lord nudging me to start thinking again about a novel. I still didn’t have a specific story in mind, but I began to research background information (which involves going through hundreds of letters that my Grandmother and Mother have saved) as well as the writing process. I do still have 3 years of homeschooling left, and that needs to be my priority for now, but I am enjoying the research in my “spare” time.

I was thrilled to be invited to attend the Northwest Christian Writers Association conference this past weekend. I realize I have so much to learn. It was a wonderful experience.

On Friday Susan and I sat in on several group editorial sessions with her editor, Steve Barclift, from Kregel Publications. It was fascinating to listen to various writers pitch their ideas for books.

Friday evening we enjoyed listening to a men’s chorus representing the New Horizons Mission which ministers to street kids in downtown Seattle. They have an old-time revival style, singing songs I grew up with, so I couldn’t help but sing along (softly). The key note speaker for the conference was Bob Cornuke, a “biblical investigator and international explorer,” as well as author of several books. He is also a wonderful speaker. On Friday evening he spoke about searching for Noah’s Ark, and on Saturday evening about searching for Mount Sinai. We were blown away by the discoveries he and his team have made.

On Saturday we had the opportunity to choose workshops to attend, two in the morning, two in the afternoon. I especially learned a lot in workshops presented by Ocieanna Fleiss, Bob Cornuke, and Jim Rubart. 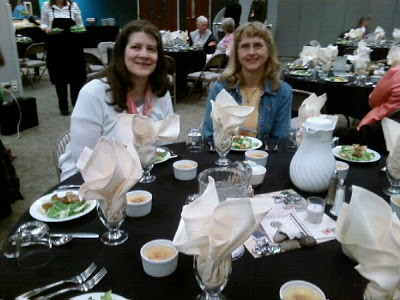 The conference concluded with a lovely banquet on Saturday evening. Mealtimes were always fun, getting to know the other writers around the table. The first question was always, “What do you write?” Over the weekend I progressed from saying, “Nothing. I’m just a wannabe.” to “I’m in the pre-writing stage. For now I just blog.” (That sounds better, don’t you think?) We also exchanged business cards so we could stay in touch after the conference was over. Susan said it reminded her of name cards in Little House on the Prairie!

I had a wonderful time, learned so much, and came away inspired!