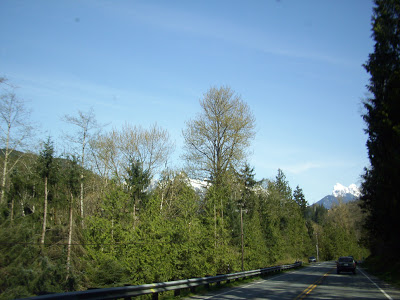 And so I guess you’re probably waiting to hear how my trip home was, aren’t you? After my oh-so-colorful experience of taking the Greyhound bus to Seattle (and then on to Tacoma) on Thursday, I can’t say I was especially looking forward to repeating the experience on Sunday. I was to catch the bus at 8:00 a.m. in Tacoma and then change buses in Seattle. The main thing I was dreading was the hour-and-a-half layover in downtown Seattle.

We drove around for a little while and when we came back, a bus was there. The only thing was, it was a Trailways bus, not Greyhound. It said Seattle/Spokane, which was where I wanted to go, but my ticket was for Greyhound. I asked the driver about it. “Yes,” he said, “this is the only 8 o’clock bus. You will change to Greyhound in Seattle.” So I tagged and loaded my bag, and boarded the bus.

I immediately noticed that the Trailways bus was more comfortable and cleaner than the Greyhound buses had been. Since there weren’t many passengers yet and we still had to wait until 8:00 to leave, I made a casual comment to the driver, “Since you’re going to Spokane, I wish I could just stay on this bus all the way. It’s nicer than Greyhound.”

He said, “Give me the other half of your ticket. I’ll take you to Spokane!”

I said, “Really?!” thinking he was joking.

He wasn’t. “Really,” he said. “We honor Greyhound tickets and they honor ours. The only thing is, this bus goes over Stevens Pass rather than Snoqualmie on I-90, and has 13 stops instead of 3. We don’t have a layover in Seattle, and you’ll get into Spokane an hour later– but it’s a more scenic drive.”

I had been on both routes so I knew what he was talking about. I decided I would rather just stay on the bus and keep riding than have to sit in the bus station in Seattle waiting for the shorter route.

It was a relaxing trip. The driver and passengers were pleasant. The seats were comfortable. The bus didn’t smell. Some of those 13 stops were simply stop-and-go at designated roadside bus stops, so that wasn’t too bad at all.

And now I know. Next time I need to travel by bus, I will check with Trailways first.