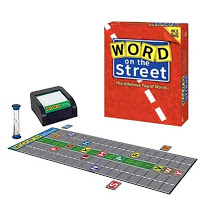 Timberdoodle is my favorite homeschool company for fun supplements and thinking games and activities.

A few weeks ago Timberdoodle had a contest/promotional running on Facebook. They were giving away all kinds of goodies. I didn’t enter every drawing because we already own some of the products, and some were more for younger kids… but there were several giveaways I was definitely interested in. I ended up winning the Word on the Street game! I love word games and I thought it would be a fun game to take camping.

The first time we played it with just 2 players. We could tell it would be more fun with more players as it’s designed for 2 teams of any number of players. Last weekend when we went camping with another family we tried it again with more people. The idea is to think of words that fit a particular definition using letters on the board. Your goal is to work the letters off the board, and as the game progresses it gets harder to think of words that use the letters that are left and still fit the definition. The first team to work 8 letters off the board is the winner. All of us thought that the timer was too short. It’s set for 30 seconds. We tried flipping it twice per turn. That was better, but probably a 45-second timer would be about right. It would make a great party game.

Earlier this summer I invested in several single-player games from Timberdoodle to give Becky something constructive to do while I was working, with Laura being gone. I was really impressed with the selection of single-player critical-thinking games that Timberdoodle offers. We got Lab Mice, Anti-Virus, Titanic, Hide and Seek Safari, and Color Code and have enjoyed all of them. My favorite is Lab Mice, though Anti-Virus seems to be the most popular among the kids. Some of our friends who have had a chance to play with them while camping have also been impressed and asked where to get them… so there you are!

And just so you know: These weren’t truly “review products” as I won Word on the Street and bought the other games, but I may be posting more reviews from Timberdoodle later as a member of Timberdoodle’s Blog Team.