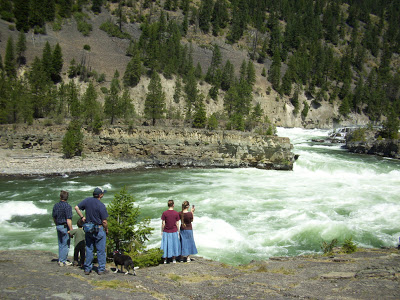 This past weekend we went camping in northwestern Montana with friends. Mostly we go camping by ourselves, but this is the second time this summer we’ve had the privilege of sharing the fun with another family.

Lyle was able to take off at noon on Friday so we got to the campground in the early evening. We got our campsite set up and built a fire. Our friends arrived later, after dark. Then we sat around the fire visiting. Before long the kids and teens wandered off to bed. The adults kept talking. And talking. After awhile I wondered if it was getting to be about bedtime. Lyle looked at his watch and said, “You don’t want to know what time it is.” We guessed it was getting on towards midnight. “Try 5 minutes till 2:00!” he said. Funny how the kids and teens had sense enough to go to bed at a reasonable hour and it was the forty-somethings who stayed up till the wee hours.

In this shot I played with the panoramic feature on my camera. It’s actually 3 frames “stitched” together. Pretty cool!

Most of our group had the courage to go across the swinging bridge. I was not among them. I expect I could go across it if I had to, but it wasn’t exactly something I wanted to do for fun. 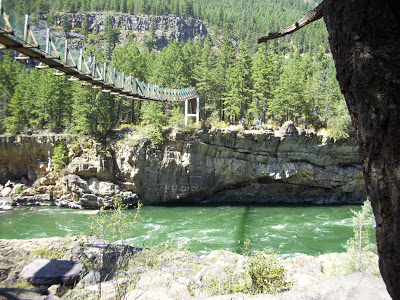 And here’s a view from under the bridge. 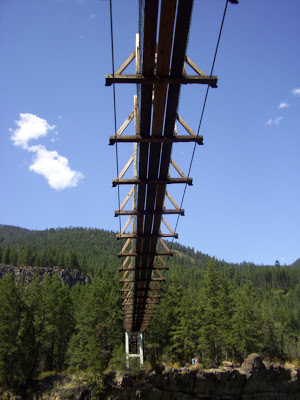 On Saturday evening we cooked our meal over the campfire. It was especially tasty with the birch bark smoke flavoring. After dark the moms and some of the kids played Dutch Blitz at the picnic table. The dads sat by the fire and talked. And talked. We don’t know what they were talking about. We were having too much fun slapping our cards on the table and whining about bad hands. We did go to bed a little earlier that night.

On Sunday afternoon, on our way home, we stopped for a hike at Ross Creek Cedars. We have been here several times, but we never get tired of the lush forest and giant trees.

Mikey found a odd growth on one tree and declared it was a steering wheel! 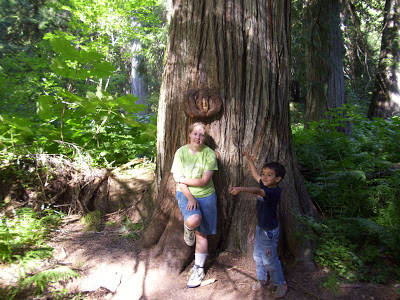 Believe it or not, five kids and one dad crawled into the space under this tree all at one time. They said it was bigger than their tent inside! 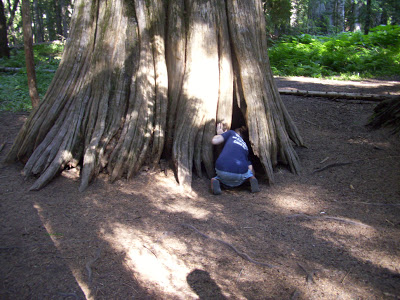 The kids had a great time climbing and exploring. It’s better than a playground. 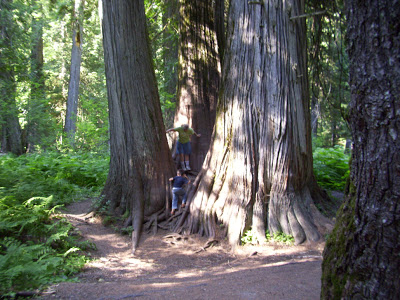 We thoroughly enjoyed the weekend.