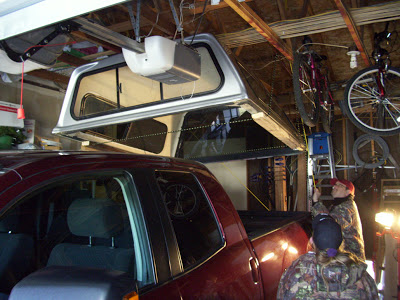 After I posted about the nice pickup topper we got a couple of weeks ago, I tried driving with the thing on. It was dark and rainy the first time, and with droplets of water on the back window I couldn’t see to back up. Driving the truck without the topper makes me nervous enough, because it just feels so big to me, so it really scared me to not be able to see what was behind me. I decided it would probably be okay in the daylight, though, especially if it wasn’t raining. Well… not so much if the roads are muddy… and the next day I had to drive on muddy roads which obliterated the back window even worse.

I asked Lyle if it would be possible to leave the topper off except for trips when we needed the cargo space. The only problem with that suggestion was where to store the topper. We supposedly have a “two-car” garage, but that just means that there’s room to walk beside the truck when it’s parked in there. I can’t imagine how you could ever get two real vehicles in at once, but in any case, we have shelves along one wall and a workbench along the other, so not a lot of room for extra storage.

Lyle suggested we could hang the topper from the rafters. I laughed at him. But turns out– he was serious! He researched how to do it (online, of course), went to Lowe’s for a few things, then spent last Saturday “putzing” in the garage again… and voila! 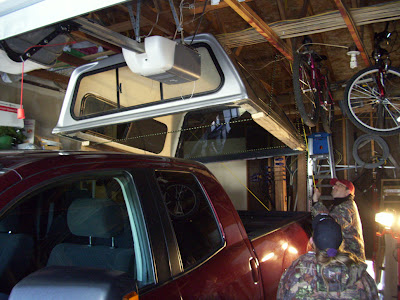 I’m just so impressed with how clever he is!