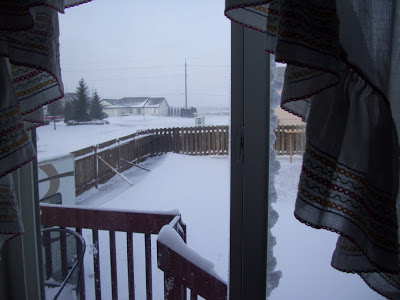 It’s a blizzardy morning in my neighborhood today. The view out my kitchen window is rather bleak. It’s cold and blustery. We haven’t really had much snow to speak of since Christmas time, and the ground has been mostly bare for at least a month, so I had hoped perhaps we would get an early spring. I should have known better.

But I won’t complain.

The girls and I have been reading The Lost Art of True Beauty by Leslie Ludy, and she talks about learning to not complain. So instead of whining about a late-season blizzard, I will be grateful that we have enjoyed a relatively mild winter and spring really is right around the corner.

I also won’t complain about having a cold, even though it’s my second one this winter. Instead, I’ll be grateful that it is just a cold, and that in general, I enjoy good health.

I won’t complain about not having time to blog as much as I would like, realizing that the other things that have priority right now won’t last forever. Especially homeschooling my children. I’m so grateful for the opportunity I have to sit down with them every day for learning and conversation.

I do have some catch-up posts lined up for this weekend, so hopefully I’ll be back soon! In the meantime, what are you not complaining about today?