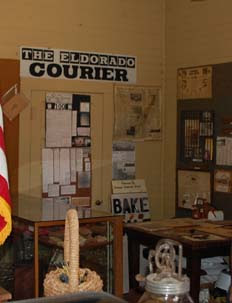 My grandparents and their children moved away from Eldorado, Oklahoma in 1958. Many of our relatives still lived there, so my grandparents had a subscription to The Eldorado Courier (pronounced “Elda-ray-duh Coo-yer”) to keep up with the happenings in their hometown. Sometimes Grandmother would include a clipping from the Courier in a letter to Mother when I was growing up.

When I walked into the Eldorado Historical Society Museum the other day, and saw the Courier masthead on the wall, I had my hopes up that I would be able to pore over the archives of the small town newspaper. I love family history and research. 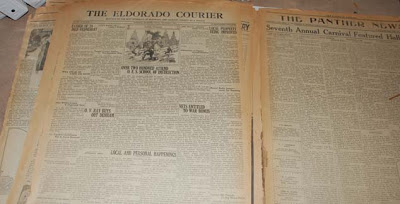 One issue from 1929 was lying on the table. As you can imagine, the pages are very brittle and crumbly. I lifted the first page carefully and just peeked at the next page. I wondered where the other issues were. I hoped they were micro-filmed somewhere.

So I asked Mr. Goodin, the man who had opened the museum for us, if he knew where the archives were for the Courier. He knew exactly where they were. There was a door I hadn’t noticed before just under the masthead (in the first picture). The archives are behind the door! 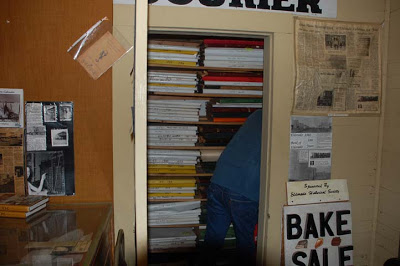 However, due to extreme brittleness of the paper, we wouldn’t be able to take them out to look at them– which is completely understandable. Mr. Goodin didn’t know if they had ever been microfilmed or not. One of my cousins said he would try to contact the district library to find out, or to see about having it done.

I hope they are able to be preserved some way. After all, tidbits like this (from 1934) are just priceless… 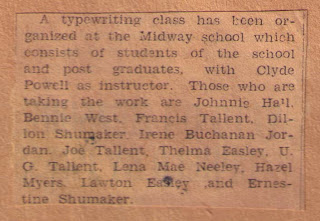 …even if they did misspell Grandmother Ernesteen’s name!