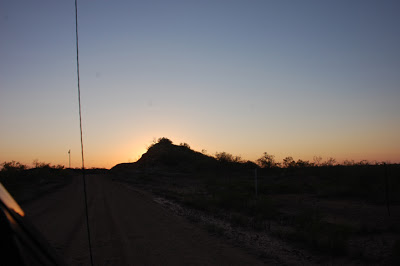 When we came to the turn-off for the Wichita Mountains Wildlife Refuge in Oklahoma last Friday, Mother asked, “Do we want to take a detour and drive through there? We have plenty of time.”

Uncle Carlton and I responded, “Yes!” in unison.

Mother wasn’t quite sure it was the right road. “Yes, it is,” Uncle Carlton assured her. “See those mountains off in the distance?”

“Where?” I wondered. I couldn’t see any mountains. Oh, wait a minute, yes, I guess there were some hills off yonder.

As we got a little closer we decided to drive up Mount Scott. I vaguely remembered having gone up once when we were through there in the 1970s. The road went around and around. And around. And around some more. We finally got to the top for a view of the lake and the surrounding countryside. At not quite 2,500 feet it didn’t seem like much of a mountain to me, but it was fun to drive up it.

“Of course, I remember Tater Mountain!” he said.

“I guess it’s called Tea Cup now,” she said. “I don’t know when its name was changed.”

“Why was it called Tater Mountain?” I wondered.

“Because it was shaped something like a sweet potato,” was the reason.

I couldn’t wait to see it.

Later that evening we went for a drive in the countryside surrounding Eldorado (pronounced Elda-ray-duh by the locals). We first approached Tater Mountain from the east, with the sun beginning to set behind it. 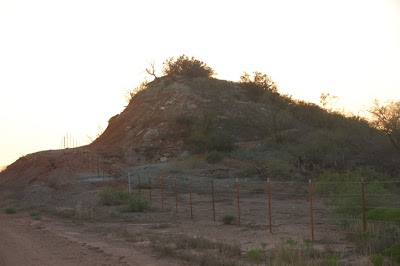 “It’s not as big as I remember it being when we were kids,” my mother said.

“Well, it’s probably not as big,” Uncle Carlton mused. “I’m sure the weather has worn it down some, and it looks like whoever put that fence on it carved some of it off.”

So the shape changed, and they changed the name to Tea Cup? I dunno. If you squint at it just right you can sorta make out the original shape of a sweet potato… and now a tea cup. I guess. 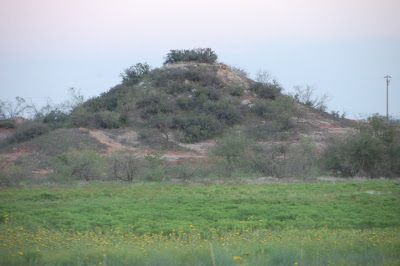 It’s probably hard to tell the size of it from the pictures, but just to give you an idea, the whole thing is just slightly larger than my house. 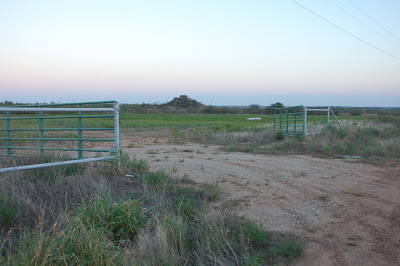 It does create a distinctive landmark from about a mile away.

And so, 60 years ago, it was known as Tater Mountain.