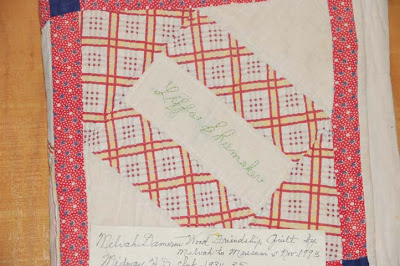 As far as I could tell, downtown Eldorado, Oklahoma only has two or three “inhabited” buildings. There is the community building, where we met for our family reunion Labor Day weekend… an apparently current insurance office… and across the street, the historical museum. All the other buildings are vacant.

For such a tiny, dying town, the museum is quite impressive and full of interesting artifacts from the pioneering days of the community. It is open by appointment only, but one of my cousins who lives there made arrangements for the man to open it for us the afternoon of the reunion.

The most exciting discovery (for me) was a quilt made by the Midway Community Home Demonstration Club back in 1934-1935. Each member embroidered her name on a block. It was folded on a quilt rack hanging on the wall. My grandparents lived in the Midway Community (out in the country) when they were teenagers. I remembered reading about the Home Demonstration Club meetings in Grandmother’s diary which she kept in 1934 and 1935 as a senior in high school, so I was pretty sure she had worked on this very quilt.

The name showing on the display just happened to be “Liffa Shumaker”– my great-grandmother.

Pinned to the quilt, just below Mother Shumaker’s block, was a list of the other names on it. “Ernesteen Shumaker” (Grandmother’s maiden name) was on that list! 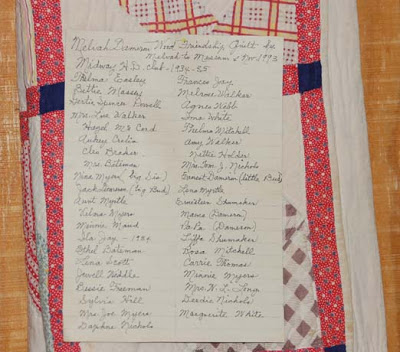 My cousin asked the man if we could possibly take the quilt down and unfold it, so we could see the other names. He kindly consented, and helped us with it. 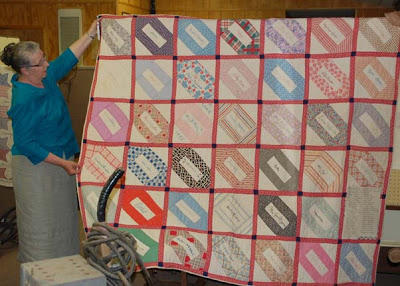 Mother recognized quite a few of the names on the quilt, as she was born about 5 or 6 years after this quilt was made, in the Midway Community, and lived there until she was 17.

And sure enough, there was Grandmother’s square! 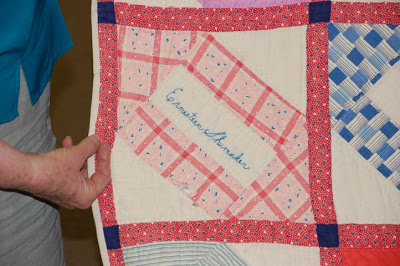 Another square of interest was Aunt Thelma’s. She was Granddaddy’s sister and also Grandmother’s best friend when they were teenagers. She ended up marrying Grandmother’s brother, so their children were double cousins with my mother and her siblings. 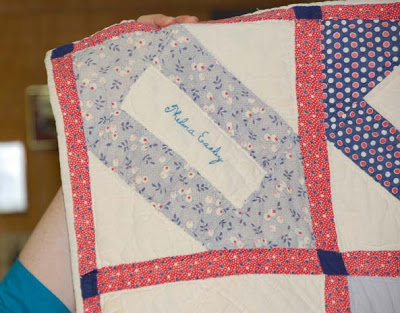 I love that it was a friendship quilt, so each person’s square featured their name in their own handwriting.

I could have easily spent several days in this little building, poring over records and documents from earlier generations. 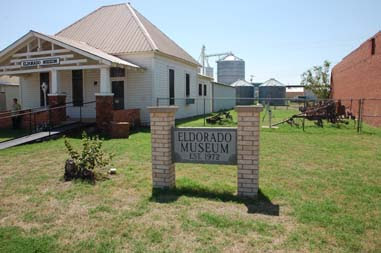