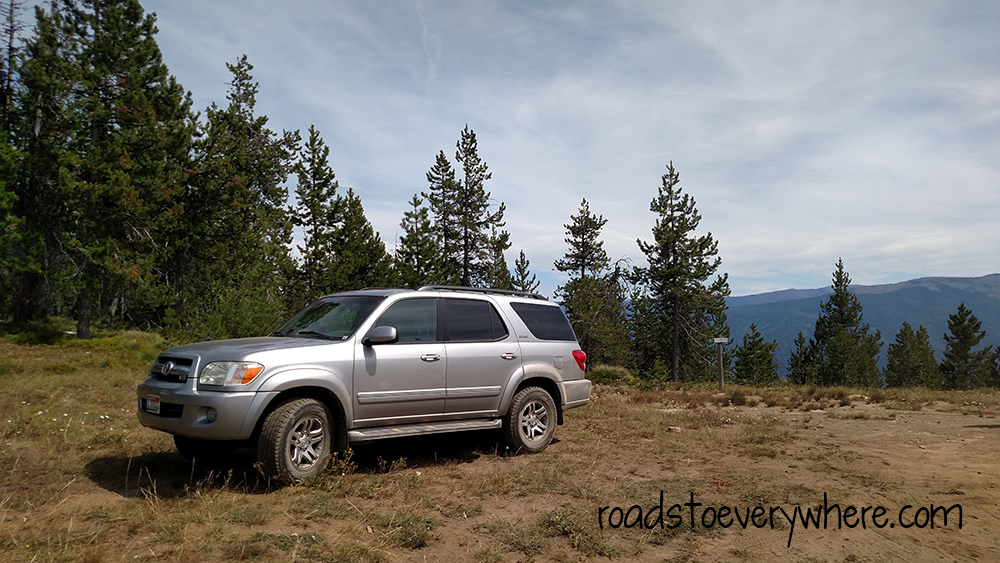 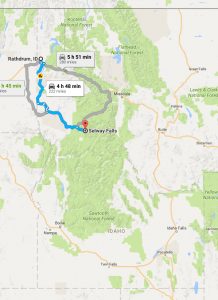 Lyle loves to come up with weekend adventures for us, and I’m more than happy to go along for the ride. This past Saturday he picked a route out of his Backcountry Roads Idaho book that would take us down into central Idaho. Laura had the day off so the whole family got to go, and we made arrangements to meet up with some friends who live in Montana. Lyle estimated that the first part of the trip would take us about 4 hours. We planned to meet our friends at 10:00 in Lowell, Idaho which is where the Clearwater and Selway rivers meet. 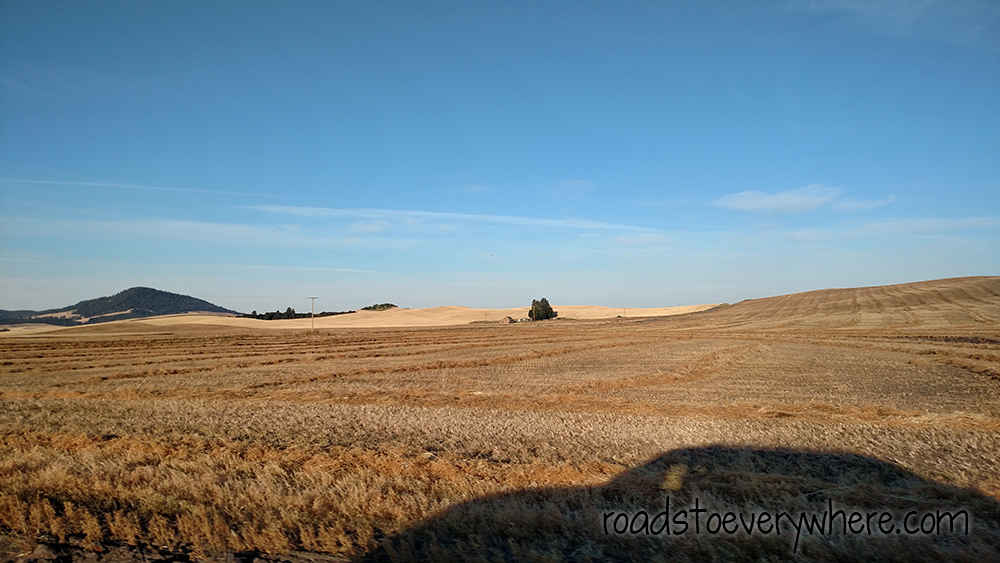 We left home about 6:00 a.m. and enjoyed watching the sun come up over the Palouse as we headed south. Looks like the summer wheat is just about ripe.

We had heard rumors about there being a new Chick-Fil-A in Moscow, and since we don’t have those in our area we wanted to go there for breakfast. We never did find it. The GPS took us up into the University of Idaho campus, so we decided it must be inside one of the university buildings. That little excursion put us a few minutes behind schedule, and if you know Lyle, that is just not acceptable. Sometimes he tries to make up time by driving faster. 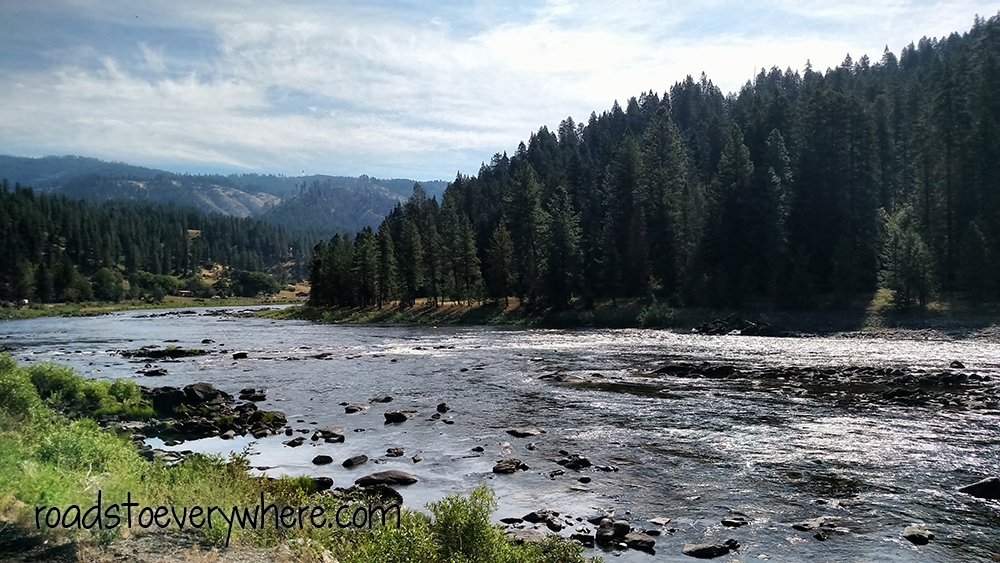 We turned east and followed the Clearwater River. We had gained a little time until we were delayed by road construction for about 15 minutes. At least we had beautiful scenery to admire while we sat waiting! How could you complain about that?

When we finally arrived in Lowell (Population: 23. Elevation: 1456′) our friends were waiting for us. They’d only been there about 2 minutes, though. Neither of us had had a cell signal to be able to text the other, but it all worked out. 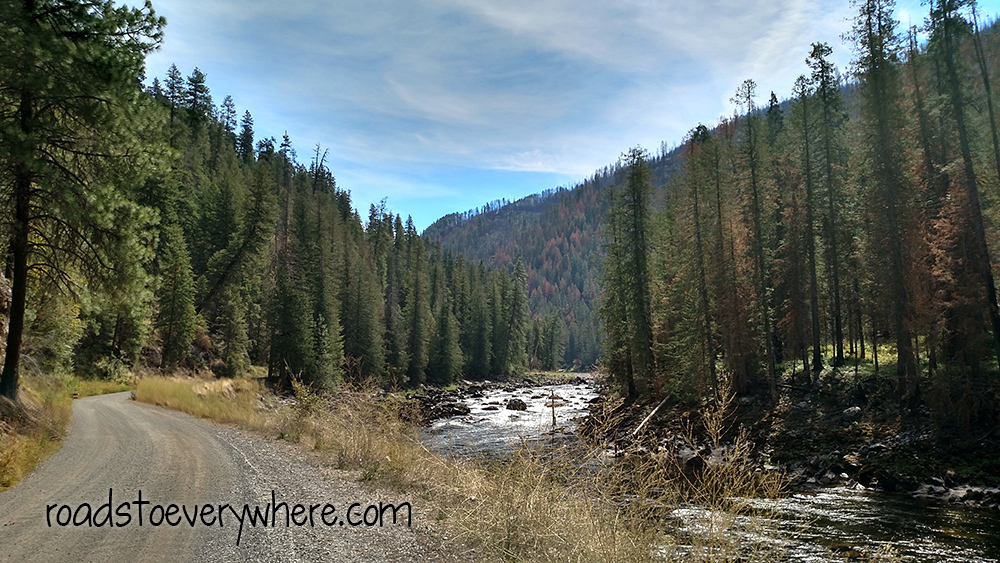 The four of them joined the four of us (plus our dog) in our 8-passenger Toyota Sequoia and we turned onto the dirt forest road that followed the Selway River. 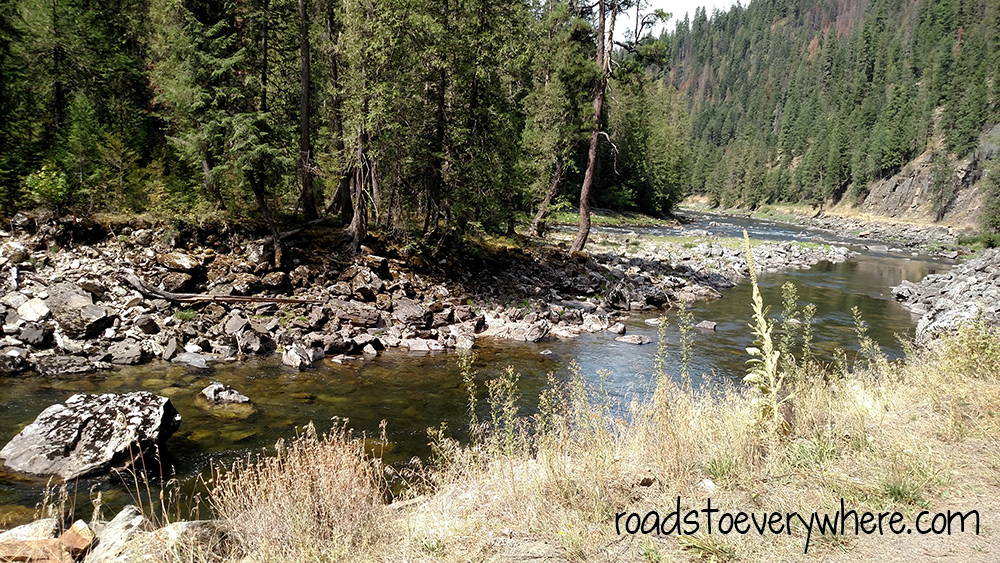 It was a hot, dusty day but the crystal clear water looked so cool and refreshing as we drove along. 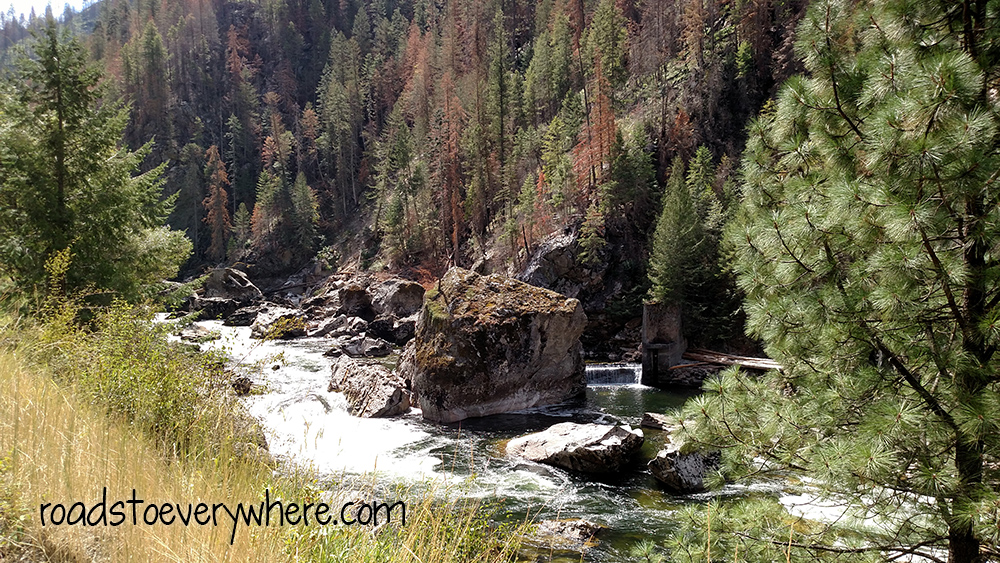 We were watching for the Selway Falls, but they turned out to be not-all-that-dramatic. Definitely pretty, but not nearly as spectacular as others we’ve seen. 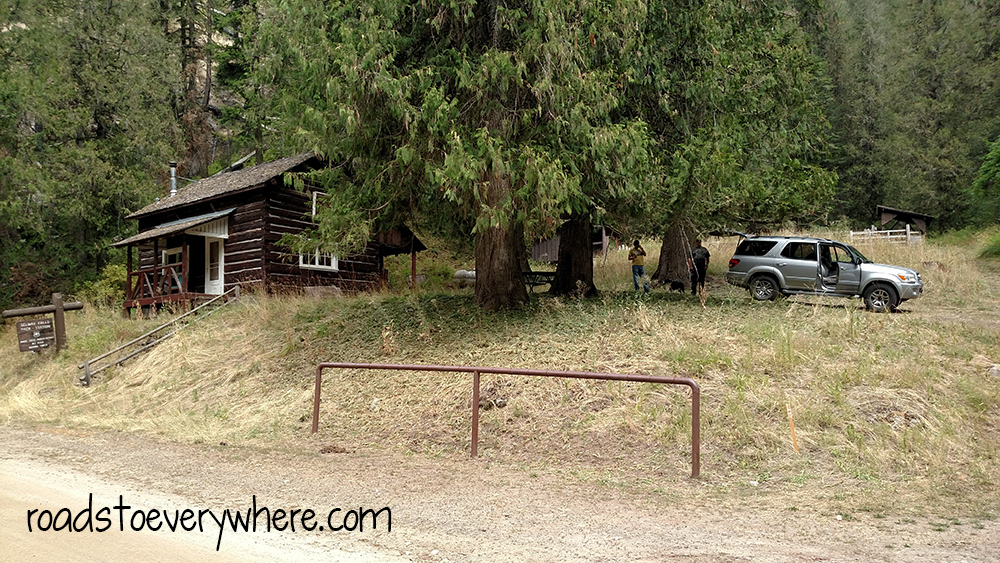 After awhile we came to the Selway Falls Pack Station. It didn’t seem to be currently inhabited and there was a handy picnic table under the cedar tree next to it. I suggested Lyle pull right on in there so we could have our lunch. I just acted like I owned the place. 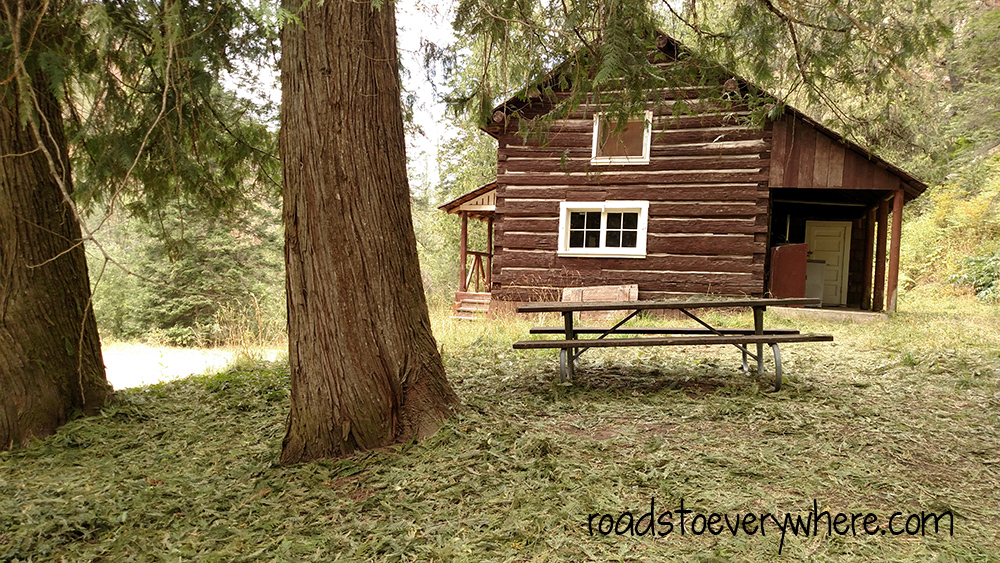 Rebecca thought she’d like to live there. Being a pack station, there were out-buildings for horses and such. I have to admit, it was pretty inviting. 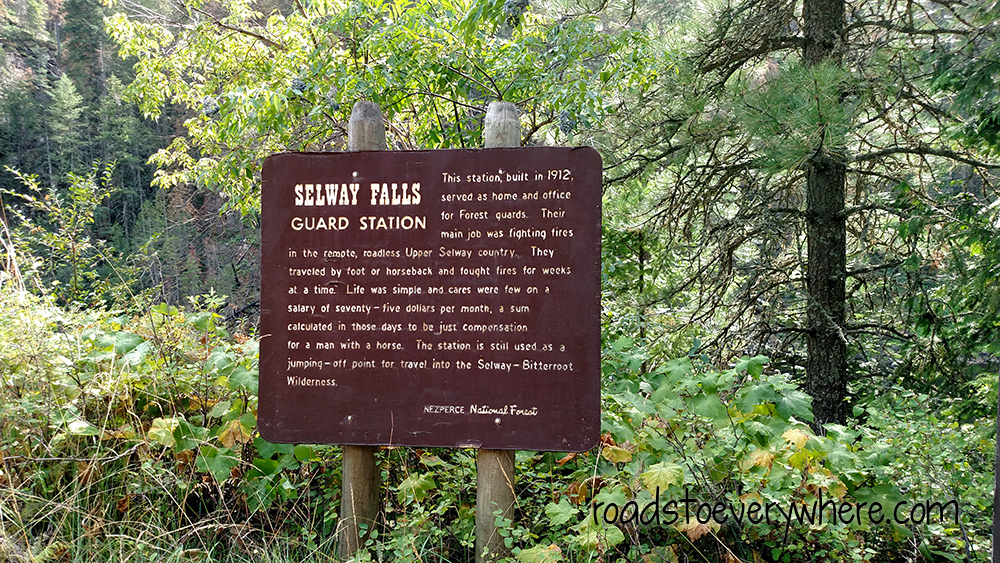 I don’t know. I might even be willing to do it for $75 a month. ‘Course I’d hafta get me a horse. And learn how to ride. And all such as that. Or maybe I could just be the housewife married to the “man with a horse.” Reckon Lyle would be willing to take up horseback riding instead of driving? I betcha he’d go for it if it was for “a man with an ATV”! 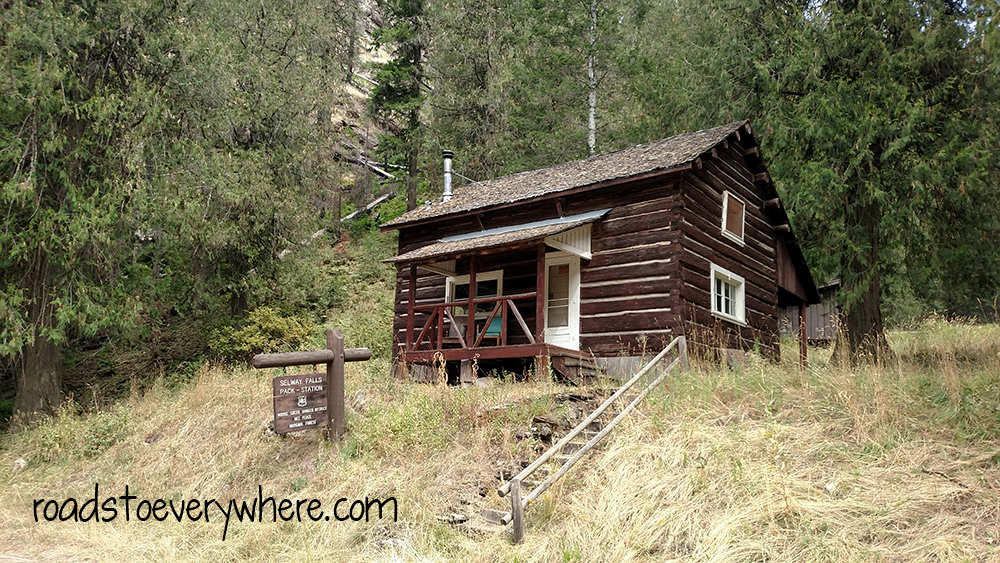 You can’t tell it from the picture, but the river is just across the road. Wouldn’t it be lovely to sit on that front porch and just watch the river? 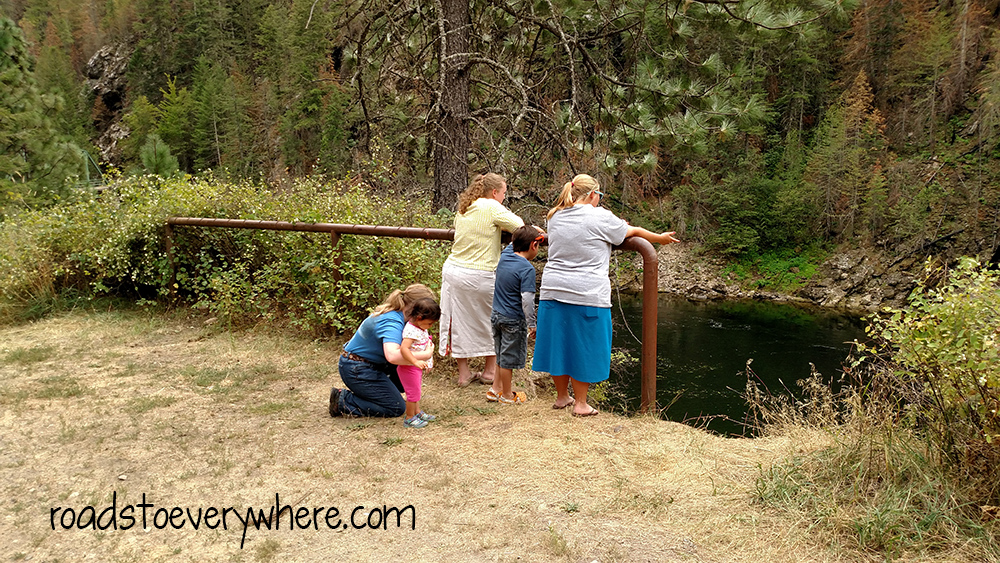 The kids spotted a big school of fish — salmon or trout, they weren’t sure which — in the river. The water is so clear you can easily see whatever is in it.

After our lunch break we piled back into the Sequoia and headed up the Fog Mountain road. On the way up we noticed the huckleberry bushes along the road were loaded. We had to stop and pick a few. They were huge! We wished we had more time for berry-picking. 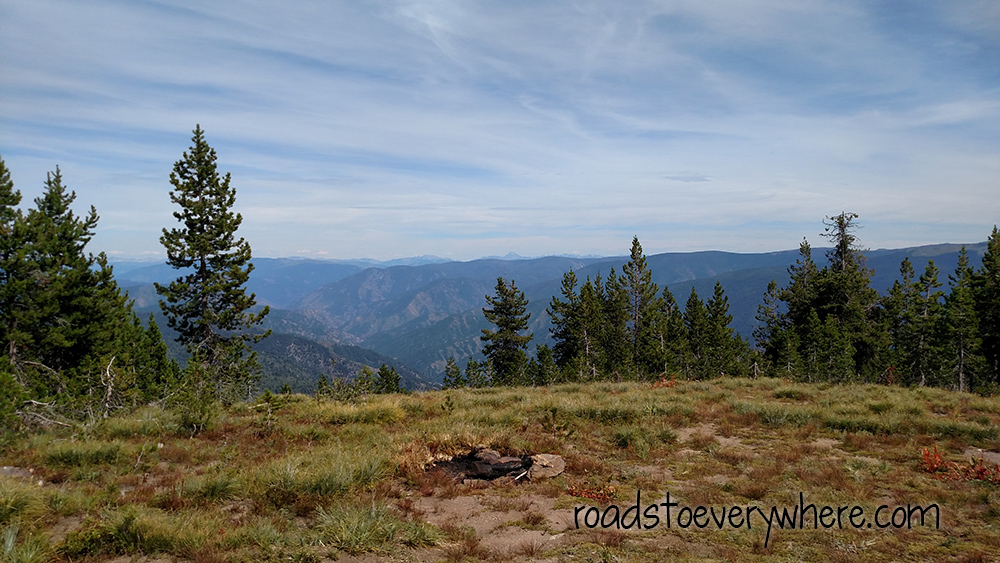 We saw the remains of several campfires. There were lots of great campsites all along the way. But we weren’t prepared to camp, so we headed home. 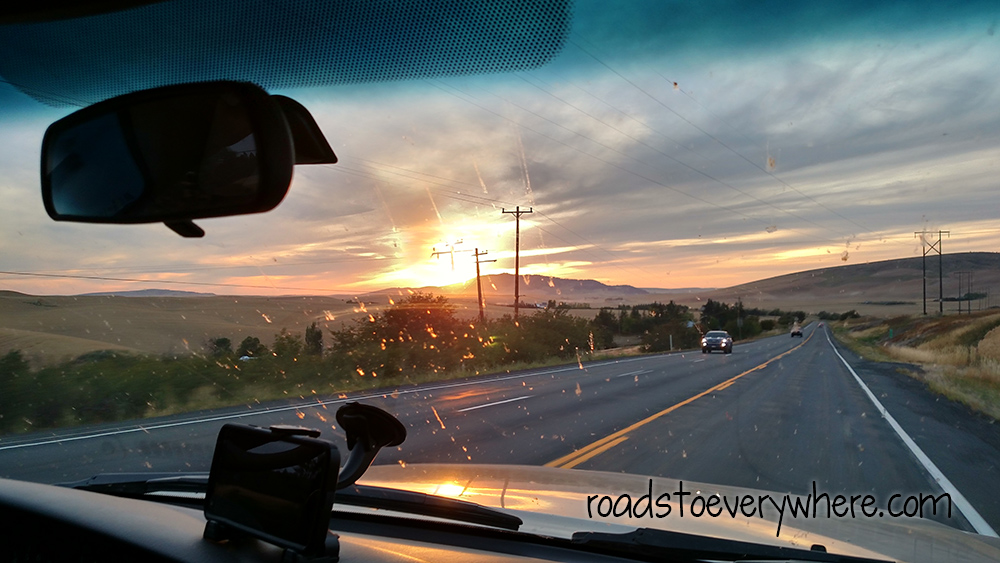 The sun was setting by the time we got back out to the Palouse. The Sequoia was dusty and bug-spattered but I had to try to take a picture of the sunset anyway. The colors lingered in the sky for a long time, and made for a pleasant drive.

It had been a long day and we were all exhausted, but it was oh-so-much-fun!