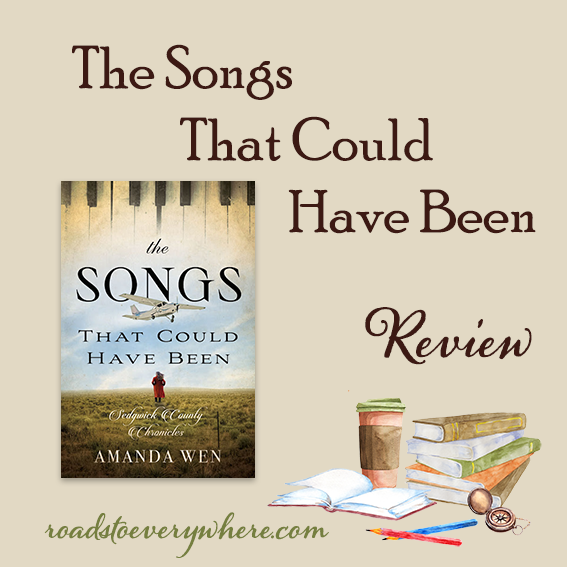 Today I’m reviewing The Songs That Could Have Been, a Christian split-time novel by Amanda Wen.

Disclosure: I received a complimentary copy from the publisher as part of Read with Audra blog tours. This post includes Amazon affiliate links.

The Songs That Could Have Been is the story of Lauren and Carter who have a second chance at love if only they could bring themselves to work through the issues that split them apart 13 years ago. The secondary story is even more fascinating. Lauren’s grandmother suffers with Alzheimer’s. The mystery comes in when she begins to talk about someone the family has never heard of who obviously means a lot to her. The split-time part of the novel is set in 1955 when the grandmother is a senior in high school.

This page-turner packs in quite a lot–long-lost love, emotional trauma, Alzheimer’s, eating disorders, alcoholism, and racial issues–yet it manages not to be too heavy. If you enjoy family stories, you’ll like The Songs That Could Have Been.

After a devastating tailspin in her late teens, Lauren Anderson’s life is finally back on track. Then a chance meeting with Carter Douglas, her first love and the man who broke her heart, threatens to throw her well-balanced world out of control.

Now a TV meteorologist, Carter is determined to make amends with Lauren. After all, she still owns his heart. But his old demons are forcing him toward the same decision he faced in the past. Is he courageous enough to make a different choice this time around?

When Lauren’s elderly grandmother, Rosie, begins having nightmares about a man named Ephraim–a name her family has never heard before—a fascinating and forbidden past love comes to light. As Lauren and Carter work to uncover the untold stories of Rosie’s past in 1950s Wichita, they embark on a journey of forgiveness and second chances that will change their lives—and Rosie’s—forever. Along the way they’ll learn that God wastes nothing, his timing is perfect, and nothing is beyond his grace and redemption.

Amanda Wen is an award-winning writer of inspirational romance and split-time women’s fiction. She has placed first in multiple writing contests, including the 2017 Indiana Golden Opportunity, the 2017 Phoenix Rattler, and the 2016 ACFW First Impressions contests. She was also a 2018 ACFW Genesis Contest finalist. Her debut novel was a 2021 Christy Award First Novel finalist.Wen is a member of American Christian Fiction Writers (ACFW) and regularly contributes author interviews for their Fiction Finder feature. She also frequently interviews authors for her blog and is a contributor to the God Is Love blog. She is the author of Roots of Wood and Stone and The Songs That Could Have Been.

In addition to her writing, Wen is an accomplished professional cellist and pianist who frequently performs with orchestras, chamber groups, and her church’s worship team. She serves as a choral accompanist as well. A lifelong denizen of the flatlands, Wen lives in Kansas with her patient, loving, and hilarious husband, their three adorable Wenlets, and a snuggly Siamese cat.