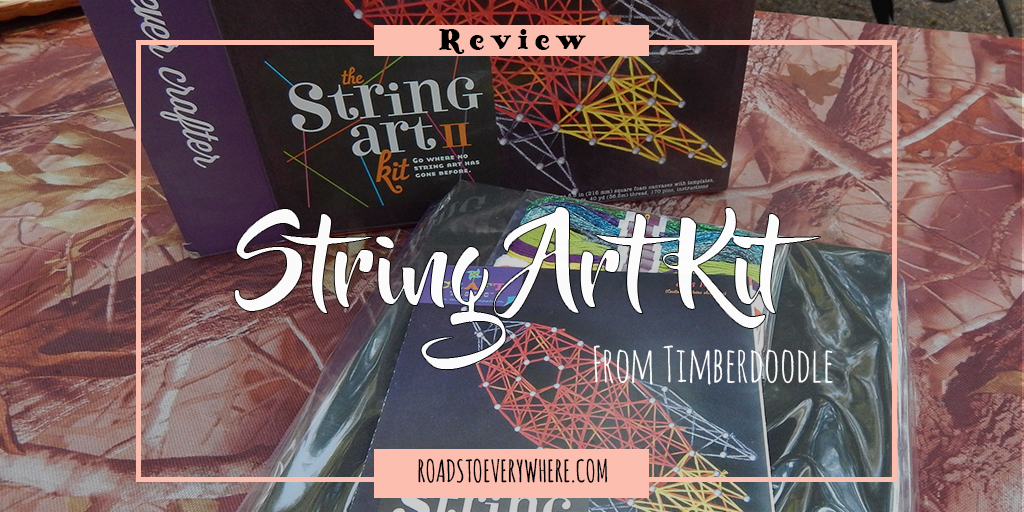 One of Lyle’s hobbies when he was a teen was string art. This was, of course, back in the late ’70s/early ’80s. It’s not a craft that I ever did, but I can see that it would be interesting. Lyle made a number of pieces and brought several with him when we got married.

Lyle told me the owl piece was a kit (or maybe he just had a pattern for that one) but the others are his own designs. They are made of black fabric stretched over boards with nails for the string which, of course, took a lot of work and hammering.

So when we had the opportunity to review a String Art Kit from Timberdoodle that involved straight pins in foam board I thought it might be something Rebecca would enjoy doing with her dad… if we could just find a time that would work for him to sit down with her. We received the kit in exchange for our honest review. 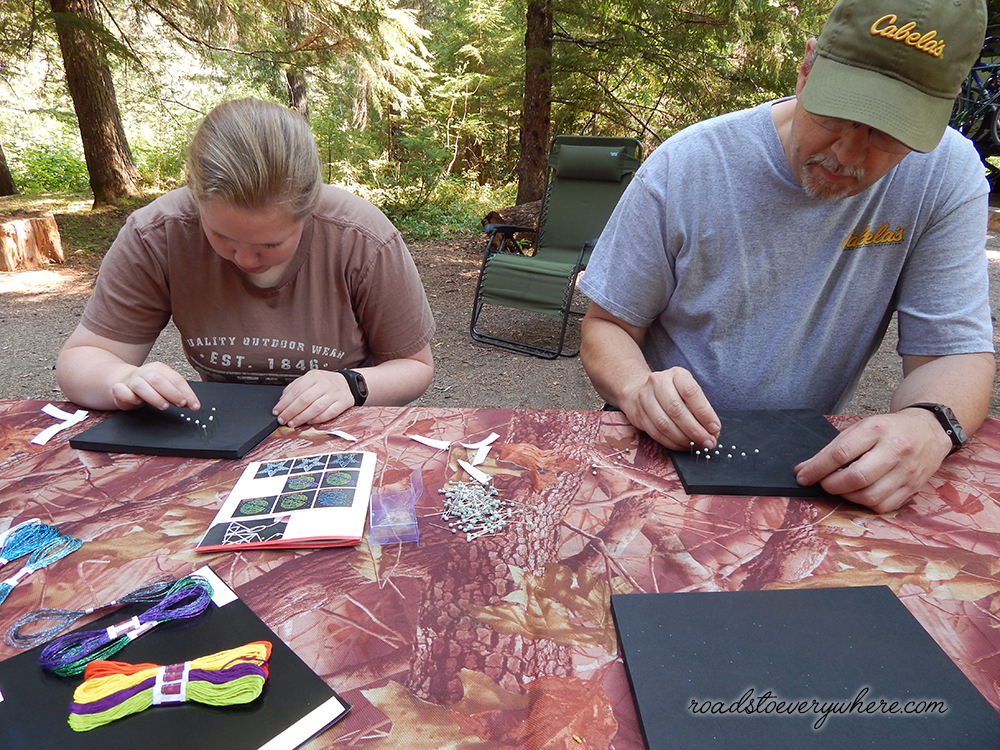 It turns out that one of our recent camping trips was that time. This was a perfect take-along project because the only thing required that didn’t come in the kit was a pair of scissors. 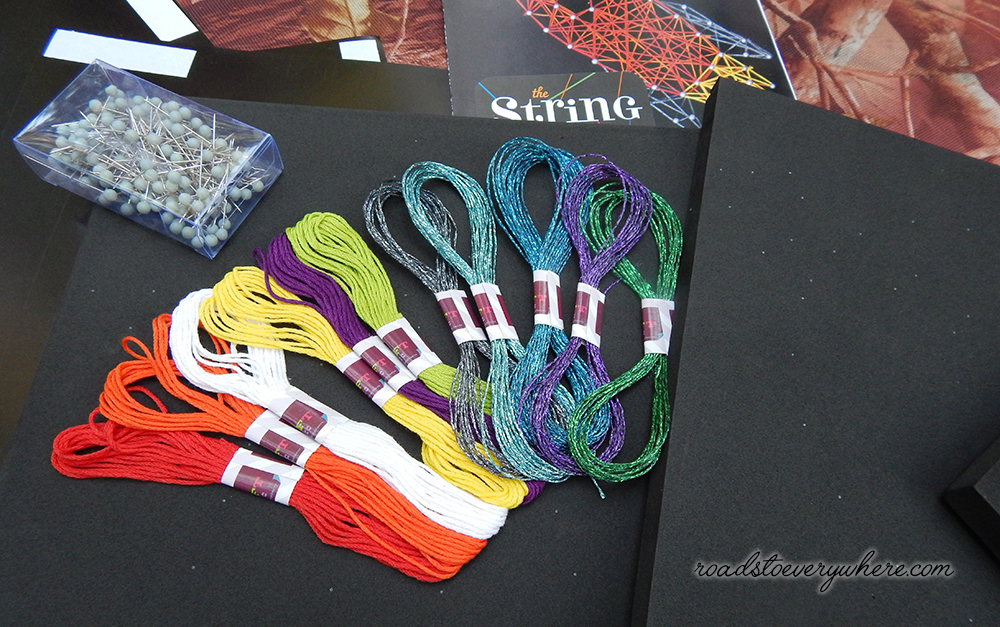 The theme of this particular kit is Outer Space. It comes with a nice assortment of colored string, including several metallics. It includes three black foam boards with the patterns already marked: a star, a planet, and a rocket ship. However, the instructions also mentioned that you could just flip the board over to use the blank side if you wanted to create your own pattern. 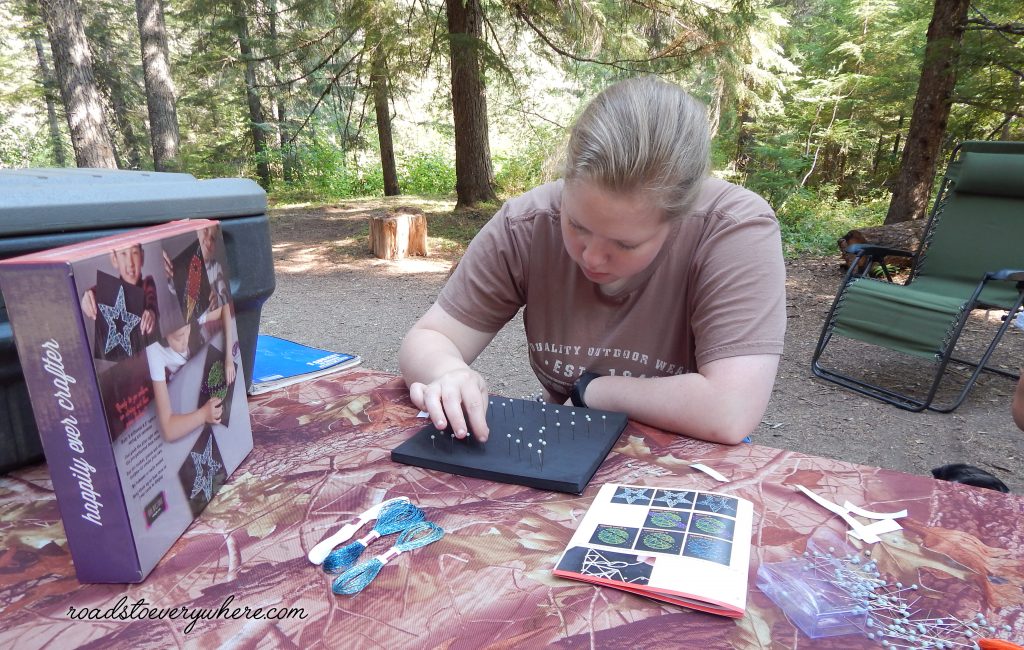 Rebecca decided to make the star, while Lyle chose the rocket ship. The pins were much easier to place than hammering nails into a board. The only challenge was making sure they were straight and not leaning. 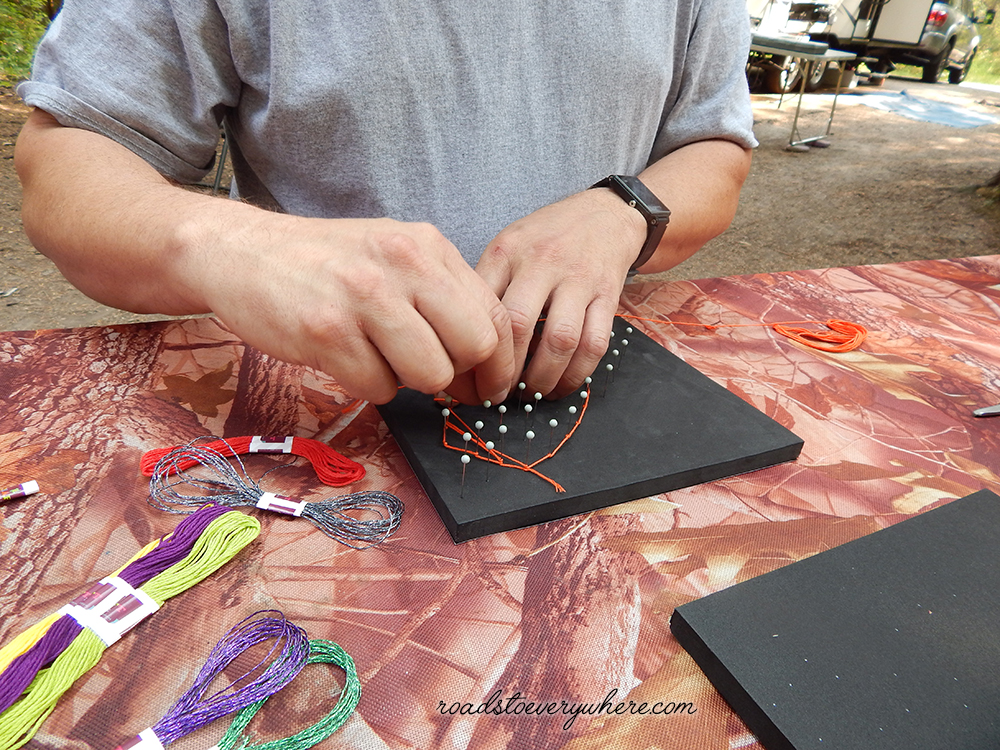 The project boards are 8.5″ square which is a good bit smaller than the projects Lyle did years ago. For that reason he said there wasn’t as much flexibility to create a pattern with the string. Instead, it was more of a random criss-crossing to cover the area. 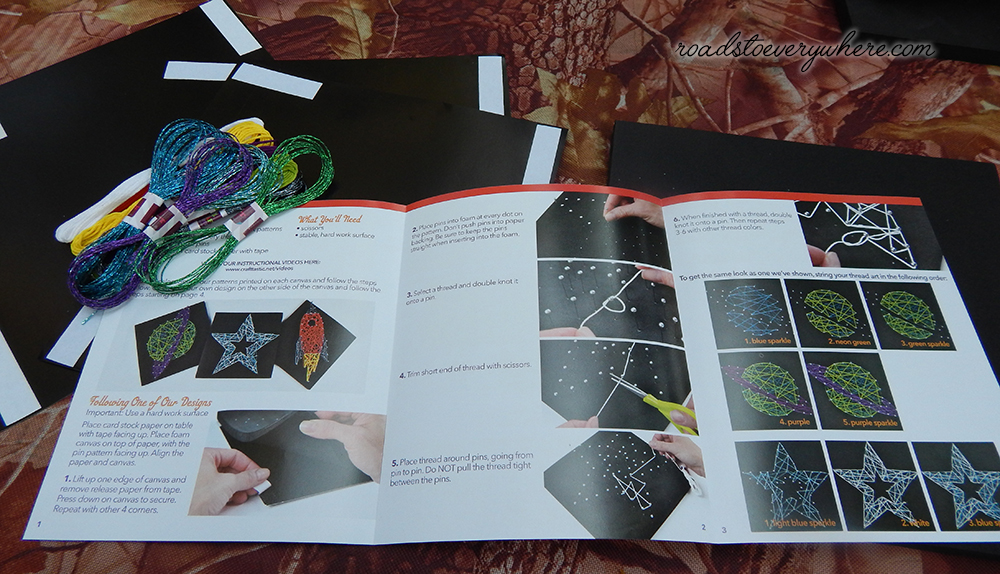 The instruction pamphlet is in full color and gives directions for getting started and tips for layering the colors. 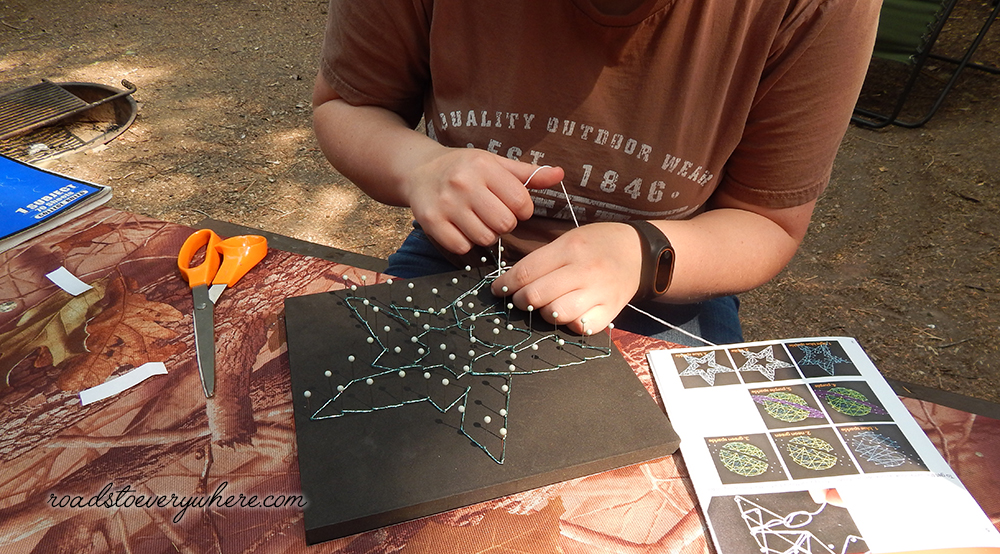 Rebecca mentioned that it would be nice if there had been a numbered guide to follow from one pin to the next. She didn’t enjoy the randomness so much. 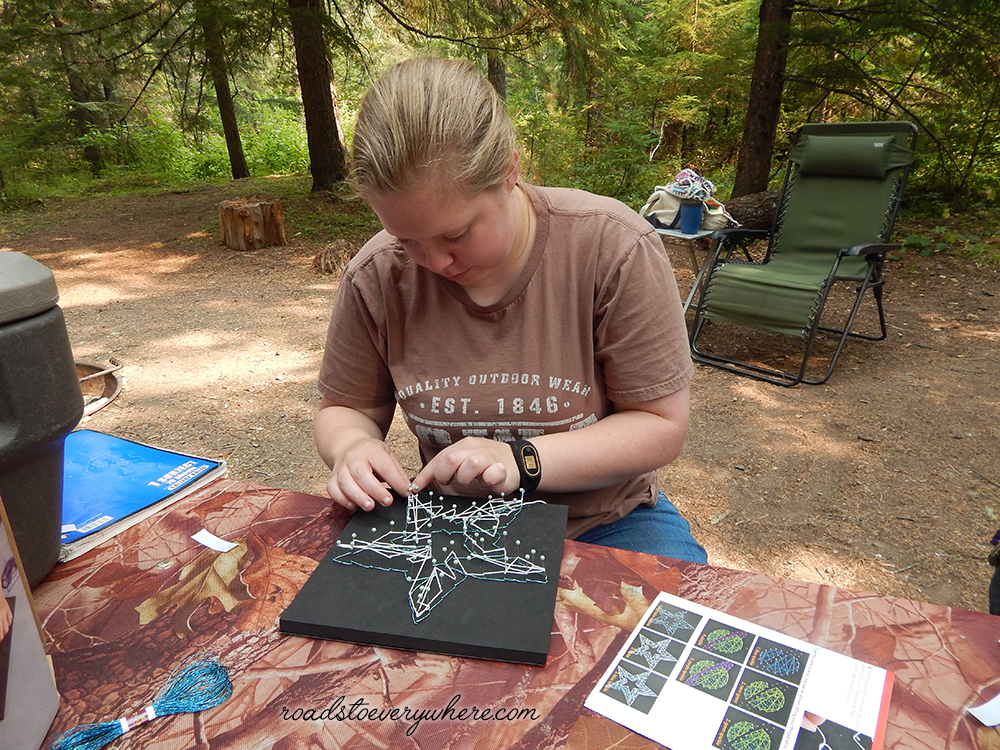 It was interesting to see the effect of layering different colors. This kit is recommended for ages 10 and up, and while at first glance it seems pretty simple and straight-forward, after working with it we can see why it’s more challenging than you might think. 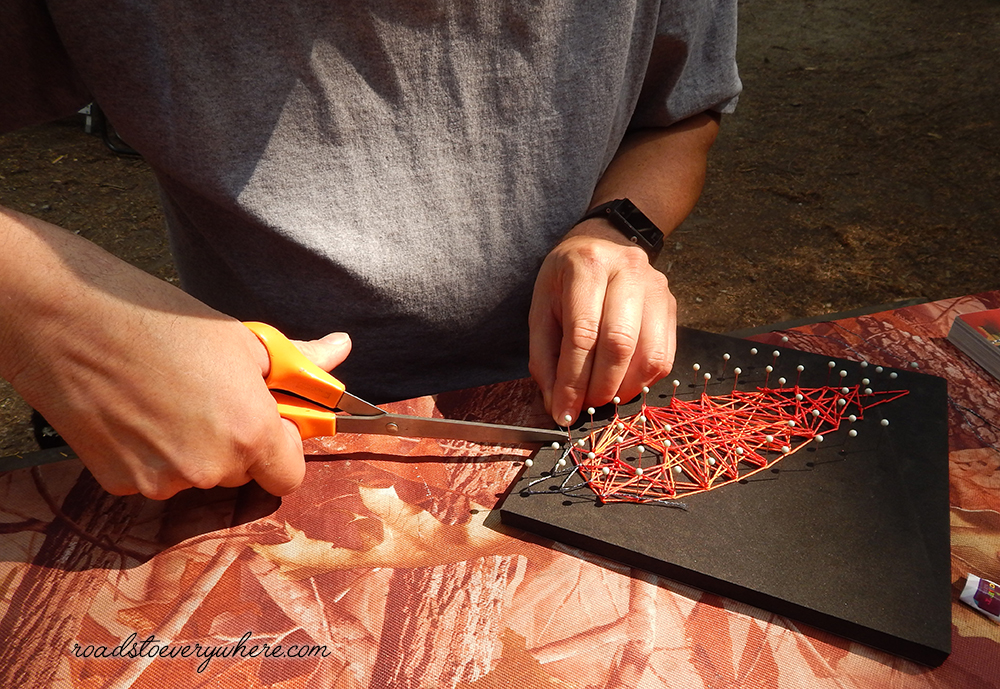 The pins are taller than the nails in Lyle’s previous projects, and with the rounded heads they are more visible. However, they are definitely easier to work with. 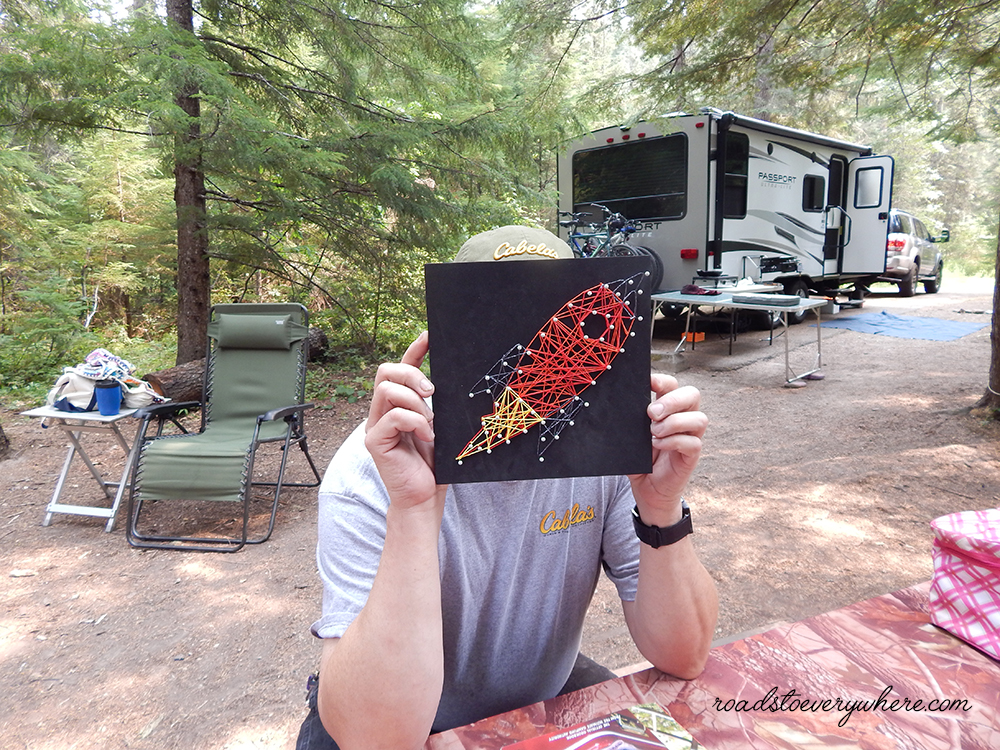 Lyle hid behind his finished project when I asked him to hold it up for a picture. Rebecca wasn’t satisfied with hers, but the nice thing is, it can easily be taken apart to try again– which is what she intends to do.

If you’re looking for a non-techy gift idea for a middle-schooler or teen, it is a fun project that can easily be done in one sitting. The kit includes enough materials for 3 projects.