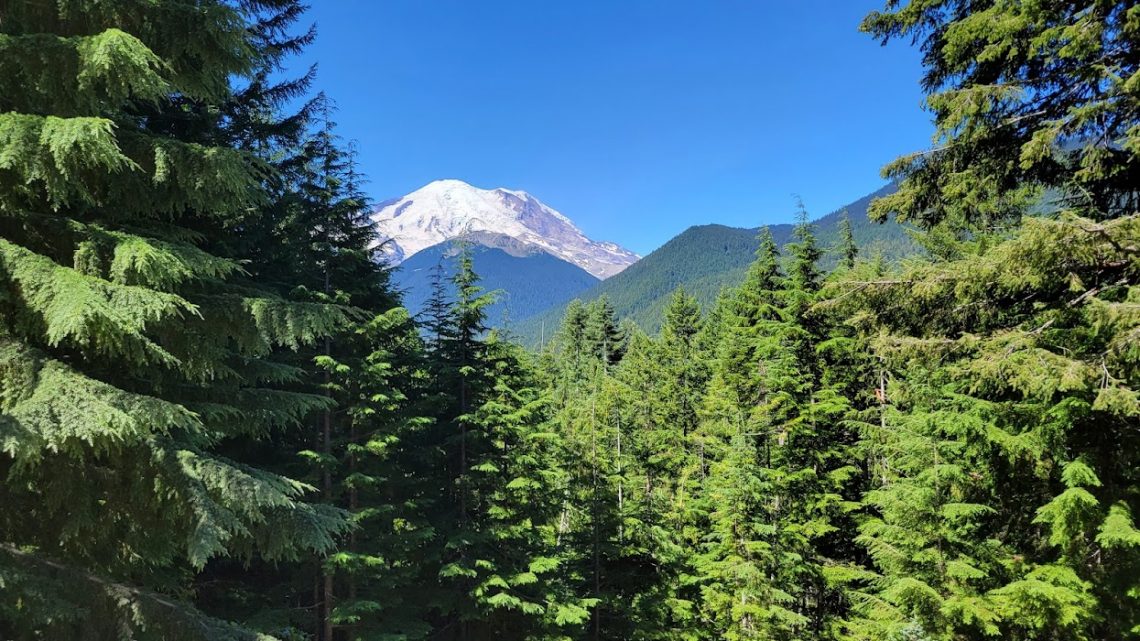 This past weekend we went to church camp in Tacoma, Washington. The Mountain was out, as they say, all weekend. What that really means is that the weather was clear enough to see Mount Rainier. The contrast is not real sharp but you can see it hovering above our trailer at the campground.

Since the weather was so beautiful, we decided to travel home through Mount Rainier National Park. We’ve been that way a few other times but I don’t remember that we’ve ever had such clear weather.

For being such a prominent mountain it can sure mess with your mind.

For example, the notion that “the Mountain is out” when the weather is clear gives the impression that it goes “in” somewhere when it’s cloudy. Kinda like when we say that the sun went behind a cloud, I guess.

The first good view we had inside the Park was to the right of us. We stopped at a pullout to take some pictures. I was interested to see how many people were casually lining up to have a friend (or stranger) take a picture of them posing with the Mountain in the background. The best kind of scenic backdrop!

As we followed the twisting highway the Mountain disappeared. I told Lyle it was just squatting down behind some rocks waiting to pop up and startle us when we were least expecting it.

See there? Not only does it go in and out, and pop up and down, it travels around, too. Because now it’s the left of us. I think it has tiny little legs it scurries around on. Or maybe wheels. That’s probably it. Caster wheels, like on an office chair.

Eventually we did leave it behind, but continued to enjoy the beautiful mountain vistas as we drove.

I’m not sure if Glacier National Park is with the Wenatchee National Forest, or if the Forest borders the Park.

In any case the scenery continued to be breathtaking for a number of miles.

We stopped to have lunch among some tall trees.

It’s kinda nice to have our house along with us.

Just sittin’ on the porch steps enjoying the change of scenery.

There was even a noisy little river nearby.

We didn’t stay long because we had more miles to cover that day.

We are looking forward to our next Great Adventure in just a couple weeks.