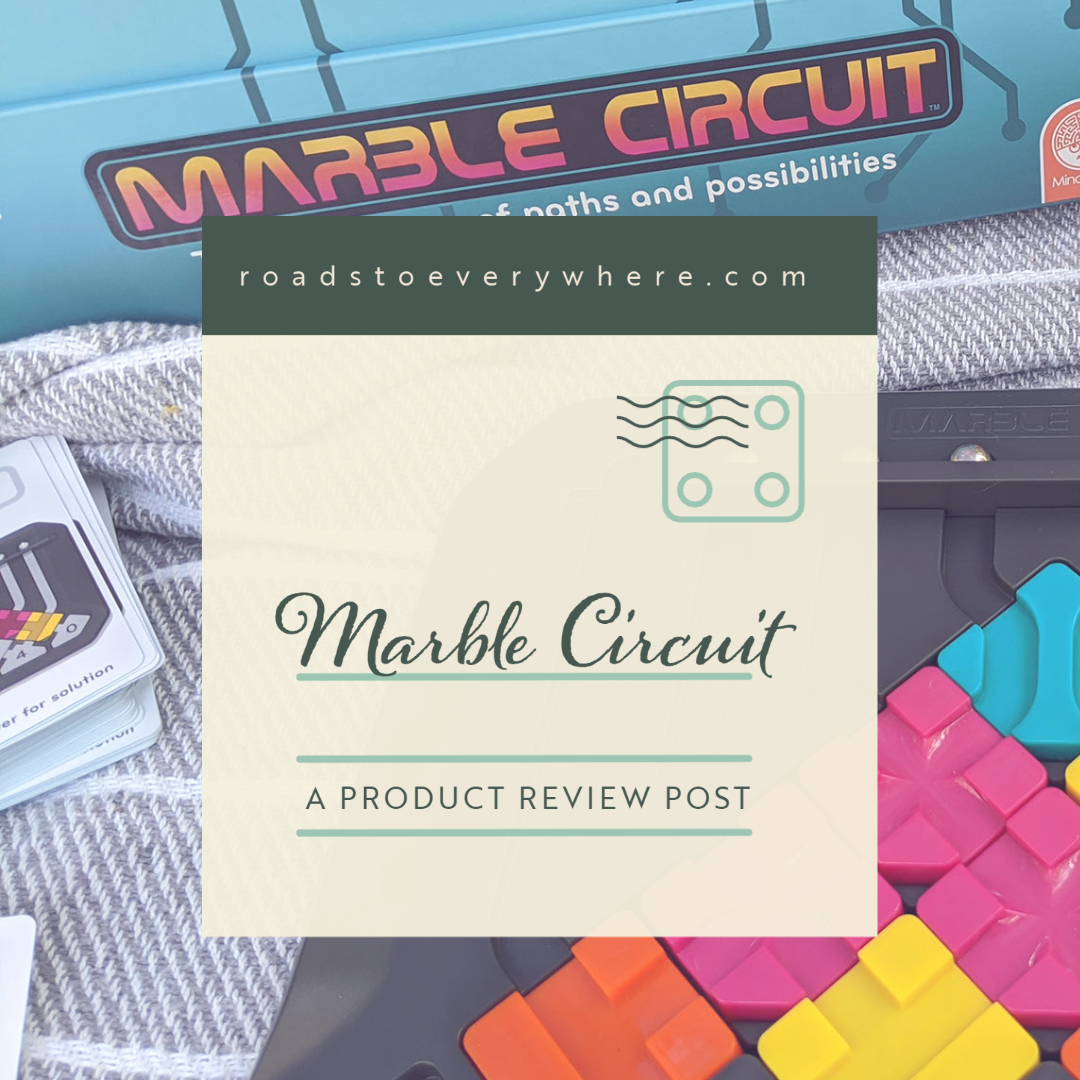 The next installment on my Off-Screen Entertainment Gift Idea List this week is Marble Circuit. “The logic game of paths and possibilities.” Timberdoodle sent Marble Circuit to me in exchange for my review.

Marble Circuit is a single-player logic game for ages 8 and up. The puzzles are definitely more complex than some. Let me walk you through the first challenge so you’ll see what I mean.

To set up the game you slide the gate in, place the marbles in a row at the top, and then arrange the tiles according to the challenge card. In the first challenge, two tile spaces are grayed out. The idea is to figure out where the remaining two tiles go so that the marbles run down the channels to the pockets at the bottom. Each pocket should end up with the number of marbles indicated on the challenge card.

After playing around with the pink and yellow tile for a few minutes and tracking the marbles mentally I think I know the correct placement. Let’s see how that goes…

You could pick up the gate and let all the marbles go rolling at once, but I like to slide it out and release one marble at a time.

The first one really had only one way it could go…

I was interested to see what would happen with the second one. Which way would it roll at that first intersection? It didn’t really matter because both routes ended up in the same pocket.

What I’m noticing is that the marbles don’t turn a corner unless they bump into a wall.

Here goes the third marble into the fourth pocket.

The fourth marble is on track to end up in the second pocket with the first two.

The route for the fifth one is a little more complex, but its going to end up in the second pocket as well.

Yep, the sixth one is headed in the right direction… and the seventh and eighth ones only have one way to go.

I tried a few more challenges in the early levels, where most of the tiles were already in place. Then I decided to skip ahead to see how difficult later challenges were.

Let me just say, super hard! Look at that! There are NO hints at all. I fiddled around with it for a few minutes before deciding I needed to go back and work my way through the challenges from the beginning.

Hint: Most of these single-player logic games are that way. You pick up little tricks and hacks as you play each level.

I like the design of the game board with the removable sliding gate so you can either pick it up or slide it out. It’s helpful that the tiles are color-coded, and each one has one corner cut off to help you know how they need to be oriented on the board. Everything fits nicely in the box which is sturdy enough for long term use and storage. (Not all game boxes are, so I always appreciate that feature.)

Marble Circuit would make a unique gift for older kids, teens, or even adults. It would be a fun gift for an older person who likes to keep their mind sharp. Anyone who enjoys jigsaw puzzles or logic puzzles such as sudoku would probably enjoy the challenge of Marble Circuit.