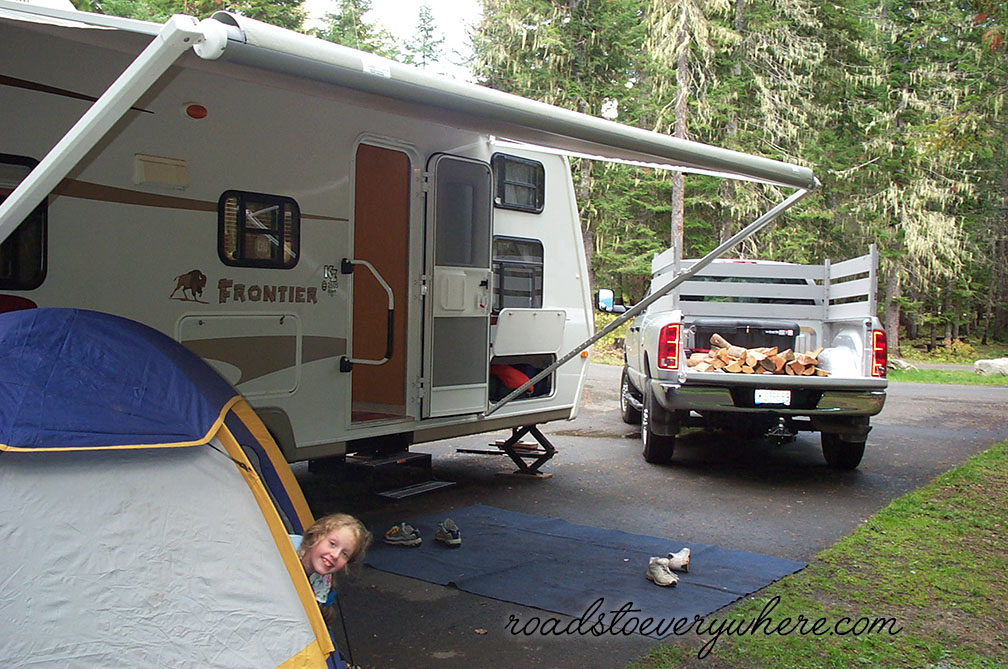 When I was a little girl, we mostly lived out in the country. So we never went camping. No need to, really. However, Lyle was a city boy and among his best memories growing up are the family camping trips. He taught me how to camp after we got married, and I’ve always loved it. I think mostly because I miss living out in the country. I also think it’s a great thing to do with the kids.

We started off, all those years ago, with a borrowed tent and no supplies… but over time we gradually accumulated the necessary equipment, until finally this year we were able to get a nice family-size RV. Being able to stock the trailer has made it much more convenient to get away for a couple of nights at a time here and there. So… you would think this would be our best year ever in regards to camping, right? Well, you would think!

After the disasterous way our last camping trip at the near-by state park started off, we decided to go way out in boonies last weekend, to a national forest campground about 60 or 80 miles from here, to avoid the over-crowding problem we ran into before. So, we started off on Thursday evening. (Because of church responsibilities we need to not be gone over Sunday, so we plan our camping outings to be back home by Saturday night.)

It was raining a little as we left home, but we weren’t too concerned because, after all, we would be sleeping in a trailer, not a tent! But as we got into the mountains the storm really kicked up. Still not a huge amount of rain, but sky-to-ground lightning and high winds. There were some small branches on the road in places. But we persevered.

Lyle decided that maybe it would be better to stay in the closer of the forest service campgrounds (Bumblebee), rather than the one we had originally planned on (Kit Price), so we took the turn-off for it. We drove the 3 miles in to Bumblebee to discover it was closed! Good grief! We turned the rig around and headed back to the main road, and on in to Kit Price, about 10 miles further.

I want you to know, less than a mile before we got to Kit Price campground, we hit something on the road (still don’t know if it was a rock or a branch) and had a blow-out on the truck! The great big Dodge truck that we’d had less than 2 weeks, with great big macho tires on it. Not one of the little, wimpy, cheapy tires on the trailer… no… it had to be one of the new expensive tires on the truck! And, of course, it was raining. Sheesh! Ya think maybe we’re not s’posed to go camping this year?

We got out, in the rain, and got the stupid tire changed and pulled on into the campground and made camp.

The rest of weekend was fun and relaxing… so it was worth it… I guess. Maybe. Anyway, the kids had fun playing in the river the next day… finding pretty rocks, catching frogs and tadpoles, and visiting with other campers.

I hope our kids will have good memories of camping when they are grown, like their Daddy does! Maybe the “disasters” won’t traumatize them too bad!