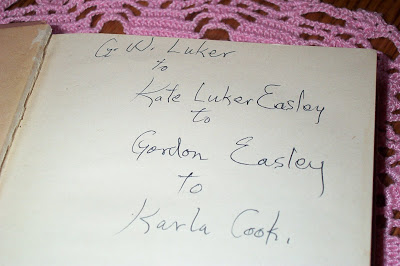 The afternoon light made plain the gilded titles of the books on the whatnot’s lower shelf, and glittered in the three glass boxes on the shelf above, each with tiny flowers painted on it. Above them, on the next shelf, the gilt flowers shone on the glass face of the clock and its brass pendulum glinted, swinging to and fro. Higher still, on the very top shelf, was Laura’s white china jewel box with the wee gold cup and saucer on its lid, and beside it, watching over it, sat Carrie’s brown and white china dog.

On the wall between the doors of the new bedrooms, Ma hung the wooden bracket that Pa had carved for her Christmas present, long ago in the Big Woods of Wisconsin. Every little flower and leaf, the small vine on the edge of the little shelf, and the larger vines climbing to the large star at the top, were still as perfect as when he had carved them with his jack-knife. Older still, older than Laura could remember, Ma’s china shepherdess stood pink and white and smiling on the shelf.

–Little Town on the Prairie

This is the last week of the June “I Remember Laura” blog-a-thon and the theme for this week is Family Heirlooms. I have been blessed with an incredible Christian heritage, which I treasure more than any material heirloom on earth. My family is large (and ever growing), so I don’t actually own very many things that have been passed down from generation to generation. As I thought about what I could share this week, I remembered an antique devotional book that I inherited from Granddaddy. How I came to have it was actually just a matter of being in the right place at the right time!

I was at Granddaddy and Grandmother’s house a few years ago when Granddaddy was going through some old books. He picked this one up and show it to me. “This belonged to Granddad Luker, and then it was my mother’s,” he said.

He took a pen and inscribed in it, “G.W. Luker to Kate Luker to Gordon Easley…”

As I watched him write I teasingly told him, “Just go right ahead and write, ‘…to Karla Cook’ right below that!” And to my surprise, he actually did. It’s a neat book with a pretty cover. It was published in 1897, and I love old books so I would enjoy having it, no matter where it came from. But I especially treasure it because Granddaddy meant for me to have it. Years later, when it finally came into my possession, I discovered another treasure tucked inside! Three old family letters. Forget the family jewels and brick-a-brack! Nothing excites me more than original documentation from previous generations.

Just the envelopes are fun to look at. In 1925 it cost 2 cents to mail a letter. By 1939 postage had gone up to 3 cents. And it was still 3 cents in 1942. The letters contain long forgotten family news and farm business… nothing of real importance all these decades later, but still a tangible connection to those who came before.

Up in the attic,
Down on my knees.
Lifetimes of boxes,
Timeless to me.
Letters and photographs,
Yellowed with years,
Some bringing laughter,
Some bringing tears.

Time never changes,
The memories, the faces
Of loved ones, who bring to me,
All that I come from,
And all that I live for,
And all that I’m going to be.
My precious family
Is more than an heirloom to me.
–Amy Grant