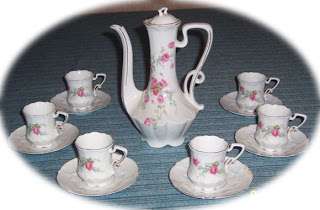 Many years ago my mother received this beautiful antique chocolate set as a wedding gift from her brother and his wife. Don’t know what a chocolate set is? Well, neither did my mother. She thought it was a tea set for years. The pot is taller and narrow, and the cups are smaller than a tea set. Not sure why that makes it a chocolate set, but apparently there is a difference! Now there I go, getting off the subject again. We’re supposed to be talking about dressing for tea this week for Gracious Hospital-i-Tea’s blog-a-thon, and I told you last week that my mother would be helping with this week’s post. (She took a current picture of her chocolate set and scanned the picture below for me… so it’s really more her post than mine! I guess you could say she’ s my “guest blogger” today!)

This picture comes from Mother’s photo album. It was taken about 1977. (Has it really been 30 years ago?) Finally we girls were old enough to have a “real” tea party with Mother’s beautiful “tea” set. We baked a pound cake in a tube pan and put it on one of Mother’s pretty hostess trays. (Remember her three-tiered one that I showed for Valentine’s Day?) It looks like we also had a platter of something else to nibble on, but I’m sure I don’t remember what. Maybe one of the twins will. Dori? Naomi? Any idea? Mother encouraged us to get dressed up for our tea party. To our minds, getting dressed up involved long dresses. I had out-grown my favorite long red dress so Dori wore that with an organza apron from somebody’s wedding. I don’t remember Naomi’s long skirt (maybe she does)… but mine was actually a bathrobe! And Naomi thought Mother’s gardening hat would be the very thing. Don’t we just look so prissy?

The thing I love most about my memory of that tea party is that my mother didn’t hesitate to let her little girls use her very best china… The twins were 10, and I was almost-12… and we knew we were more important to our mother than anything she owned.

These days she enjoys tea parties with her granddaughters, and she encourages me to have tea parties with them even though she doesn’t live close enough to join us very often. My girls and I have been having “every day” teas lately, but I should take the time to have a “dress up” tea with them soon, shouldn’t I? Let them get all decked out in whatever seems “dressy” in their minds, and use my best china.