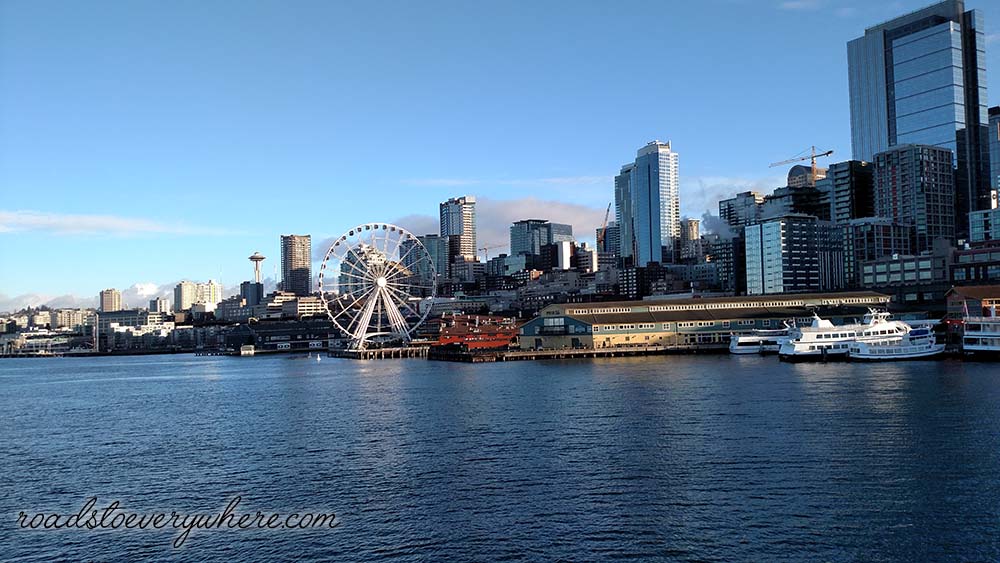 I’ve never actually been on a cruise. Lyle and I like traveling by car so well that I don’t know that we will ever go on a cruise. I won’t say never, but it’s not something on our bucket lists. However, we’ve discovered that we do enjoy taking the Seattle Ferry across Puget Sound, and that’s kinda like a mini-cruise. Or maybe not. But I like to imagine that it is.

We’ve had several trips to Seattle this spring to make deliveries or pick-ups for the print shop. Crossing the Sound hasn’t actually been required to take care of our business, but somehow we’ve managed to work it in a few times just for fun.

The first time was a Friday evening on February. We made our delivery in downtown Seattle right at 5:00 p.m. and then planned to spend the night in Bremerton, which is across the water from Seattle. 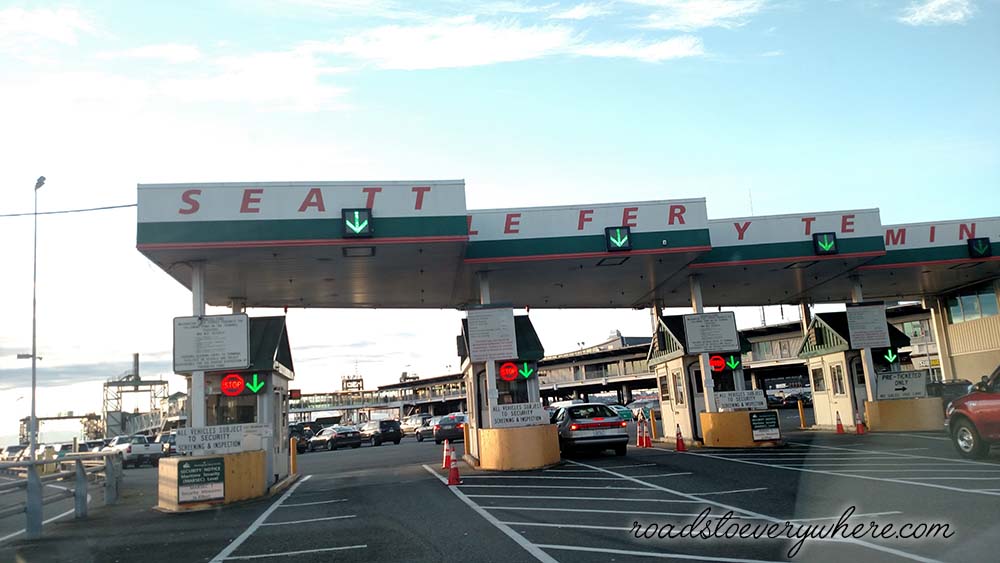 It was about an hour till time for the next ferry but we decided to go ahead and get in line. 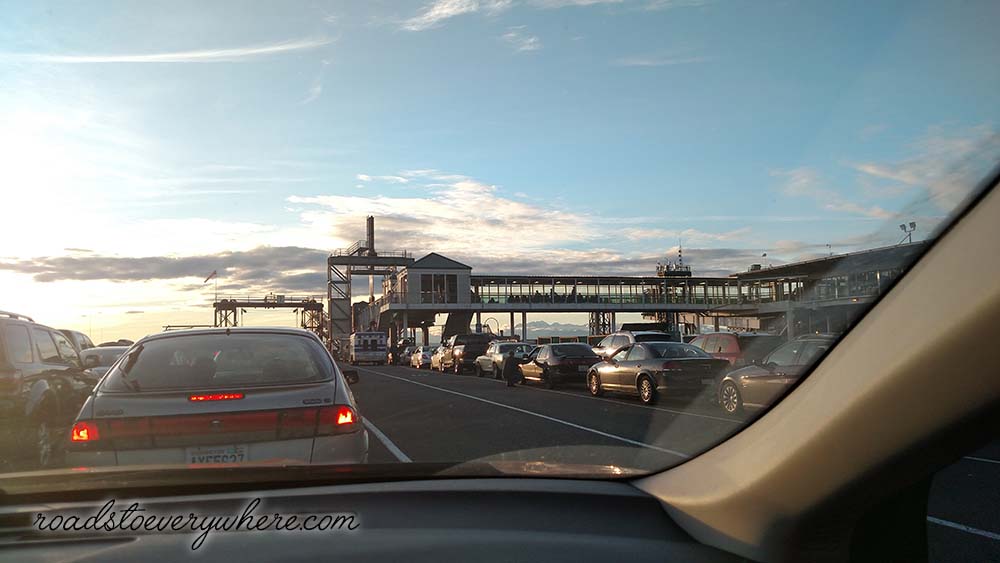 It was a good thing we did. Being Friday evening rush hour, the man at the toll booth told us we might not make it onto the next ferry. In other words, we might be in for a 2 hour wait, rather than 1 hour. We took our place in line and settled in for however long it took. 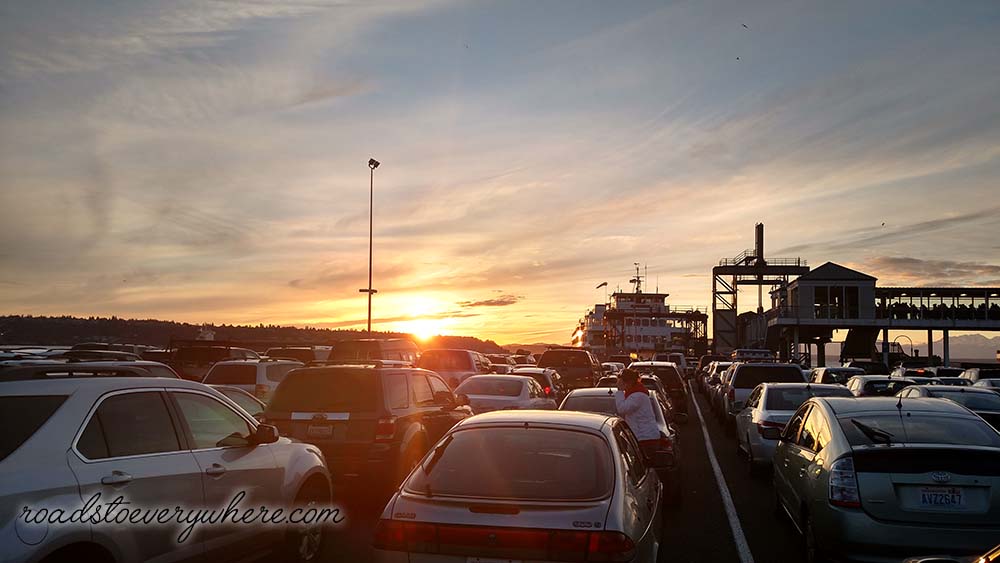 It had been a sunny day (rare for winter in Seattle), so at least we had a good vantage point to watch the sunset. The cars continued to line up. After the ferry arrived at the dock, we watched the long, long line of pedestrians make their way across the sky bridge as they boarded the boat. 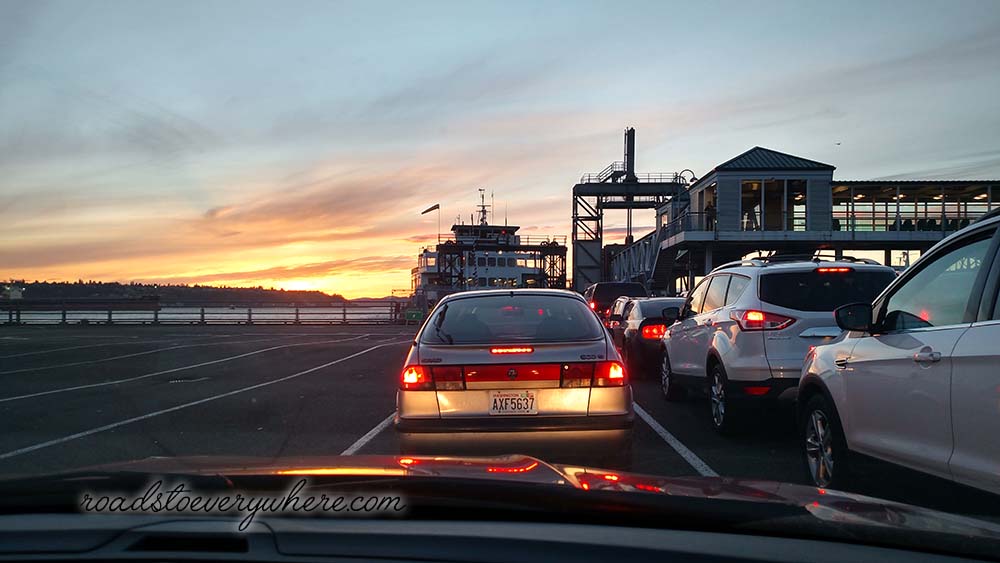 All the rows of cars to the left of us boarded. Finally, our row started moving. We were nearly holding our breaths waiting to see if there would be room for us. 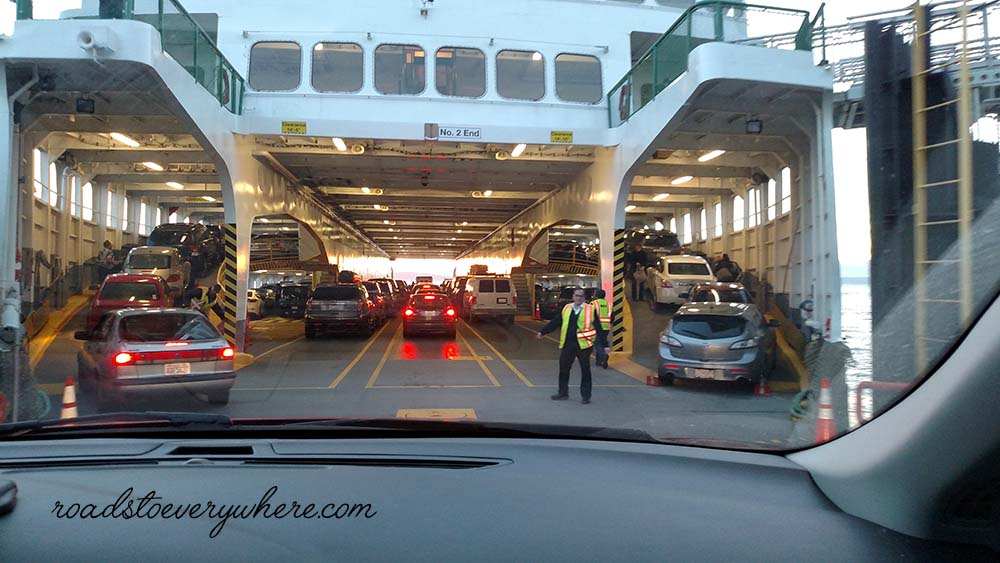 And then… we were at the boat and the man waved us on. I counted 6 more cars board behind us before they closed the gate. The boat holds 120 vehicles or something like that, so we very nearly didn’t make it. 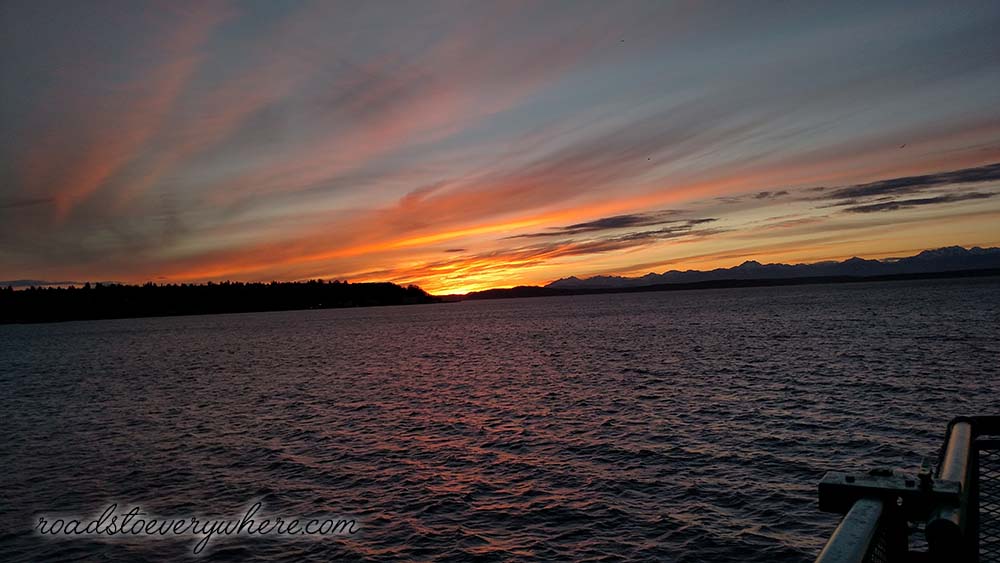 I’m so glad we did, though, because we were able watch the rest of the sunset from the deck. Wasn’t it spectacular that evening? 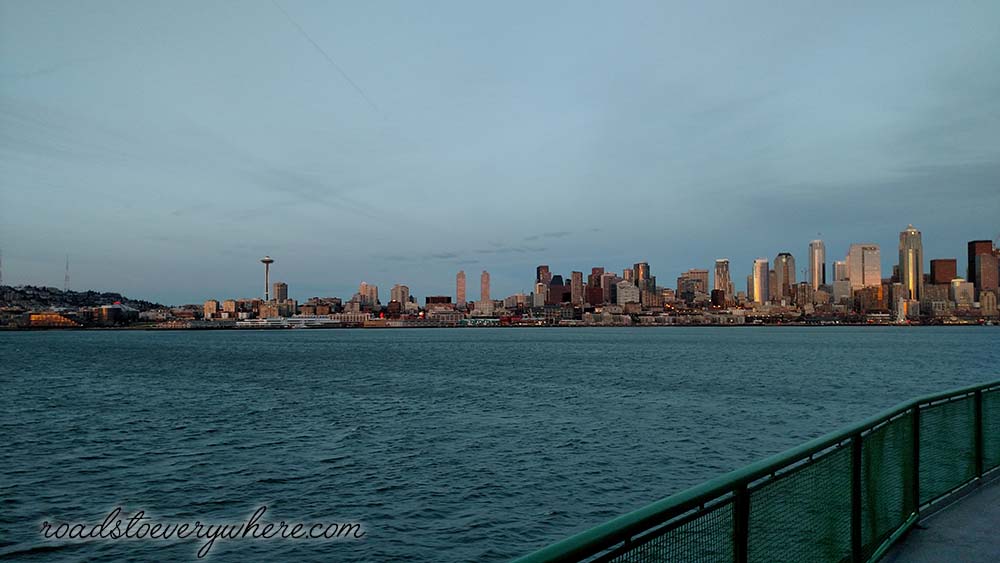 Then we trotted down to the other end of the boat to watch the city skyline recede. The sky was beautiful, but it was still February, so the breeze on the water was pretty sharp. 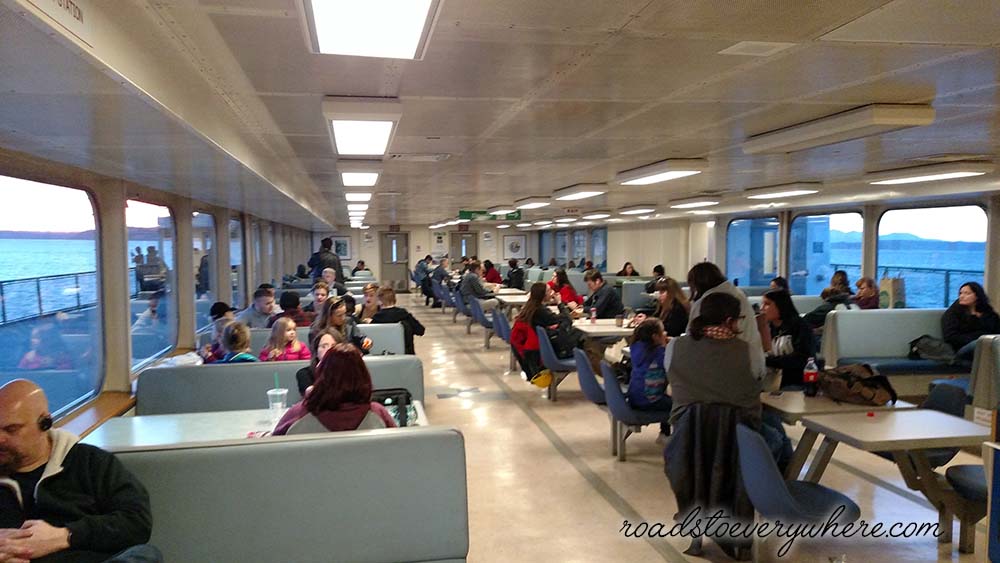 We went inside to warm up. The passenger “cabins” of the ferry are very comfortable with wide booths, tables, and seating areas. There is also a lunch counter where you can order food and drinks, if you like. 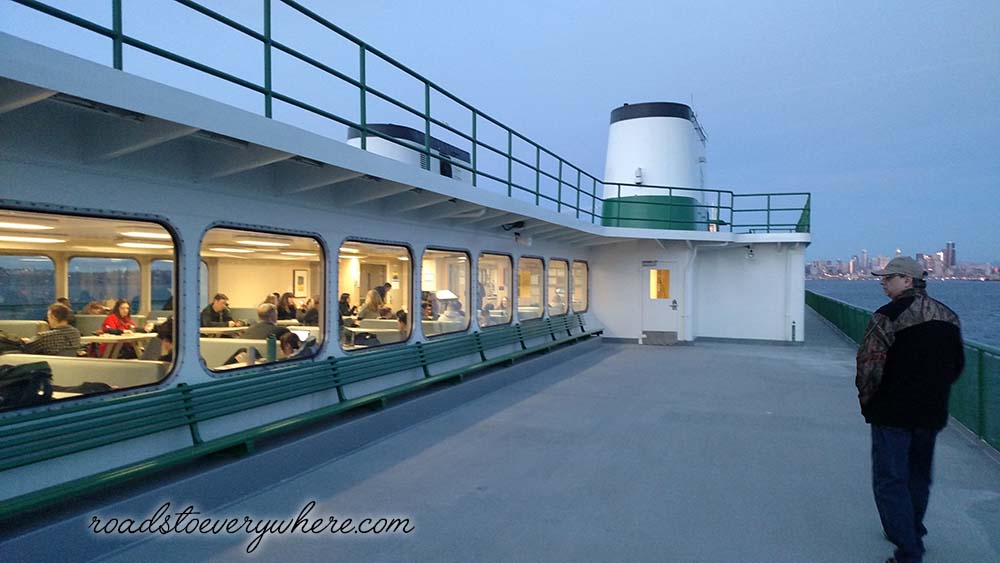 After we warmed up a bit we couldn’t resist going back outside. This particular route takes about an hour, so we did the in-and-out thing several times. It was full dark by the time we got to Bremerton.

A couple weeks later, we got to go again. This time we took the ferry in the morning. It was another pretty day and not quite so chilly to be out on the decks. 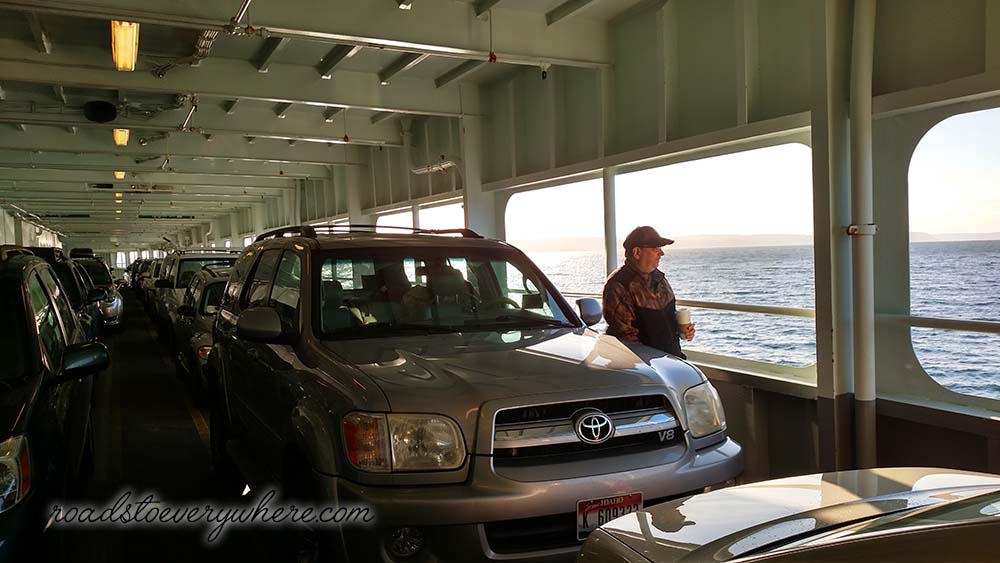 The hour went by fast. We headed back to the car deck and stood outside watching the approach to Bremerton until the announcement came on that it was time to get back in the car. 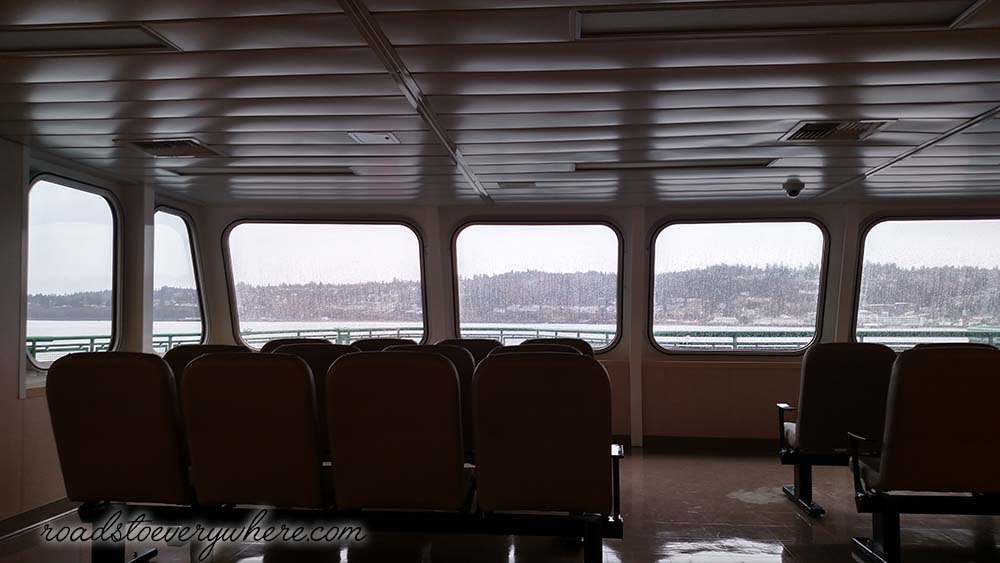 A few weeks after that we took a different route. That ferry ride was only about 15 minutes long. We had time to walk the length of the boat once and find the restroom and that was about it. Just as well because it was a rainy day. Much more typical for spring in the Northwest.

Have you ever taken the Seattle Ferry? Or some other ferry? What do you think? Is it like a mini-cruise? Or not really?