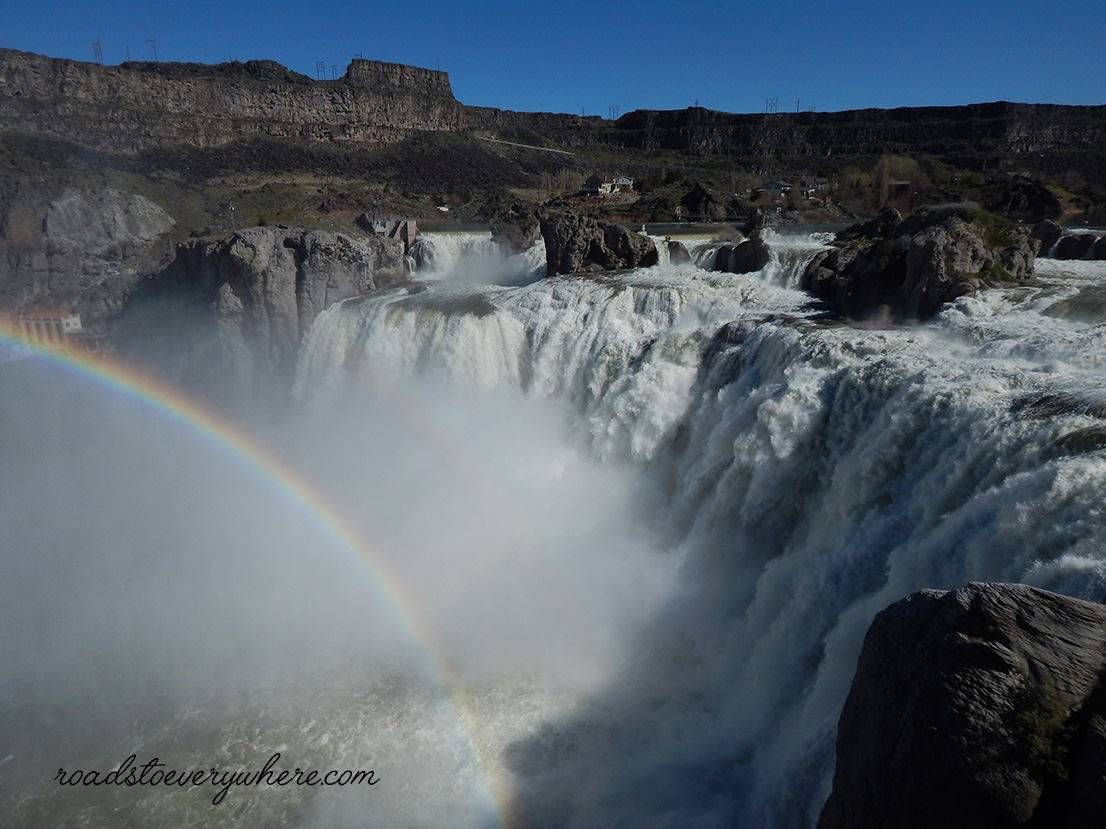 A few weeks ago Lyle began to talk about how beautiful Shoshone Falls is this year. He follows several Idaho scenery accounts on Instagram and he kept showing me pictures. “We should go down and see it one weekend,” he said.

Let’s see. It’s about a 9-and-a-half-hour drive so… um, yeah, I guess we could theoretically fit it in two days.

But then, as it happened, the print shop got in 3 jobs all at once to be delivered to Boise. As is the case with the envelope orders from Seattle, when the job is big enough it is cheaper to deliver it ourselves than have it shipped.

It takes 8 hours to drive to Boise and the jobs needed to be delivered by end-of-business on Friday, so we needed to leave at o’dark-thirty to get there in time. As we were planning the trip, Lyle said, “Oh! I just had a brilliant idea! We could come home by way of Shoshone Falls!”

Since we had 2 full days to get home I, too, thought that was a brilliant idea. So that’s what we did.

It rained and snowed on us most of the way down to Boise on Friday. We were delighted that Saturday turned out to be clear and sunny. 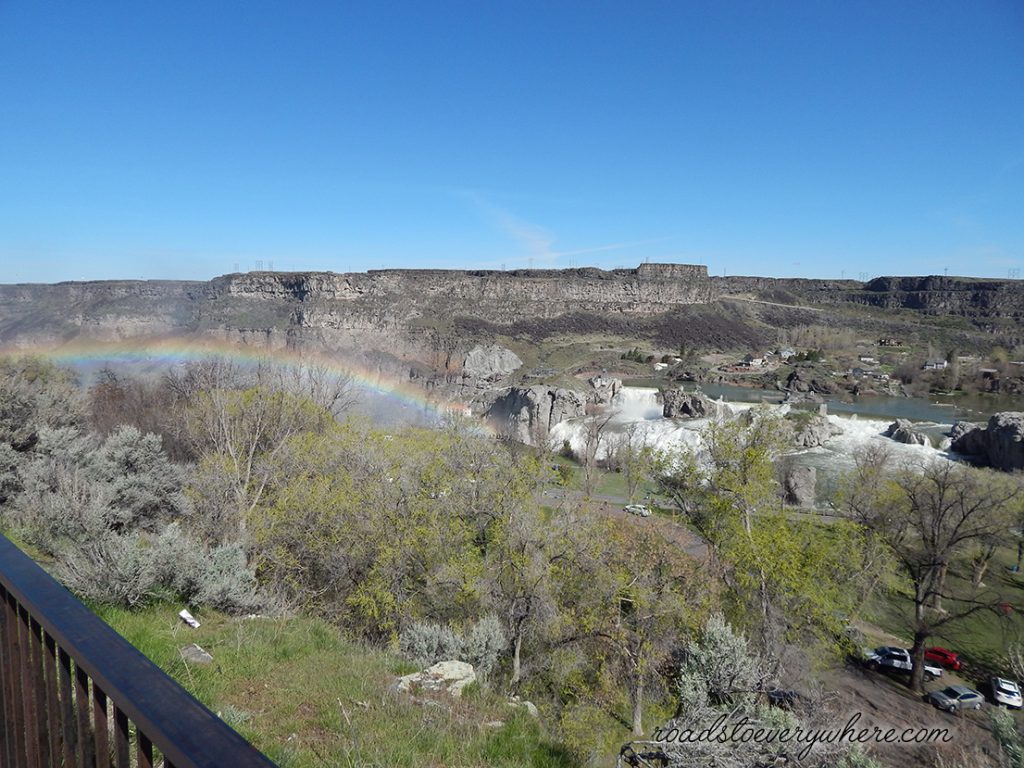 Shoshone Falls is on the Snake River in southern Idaho deep down in a canyon. It is called “the Niagara of the West” as it’s actually taller than Niagara Falls, though not as wide. 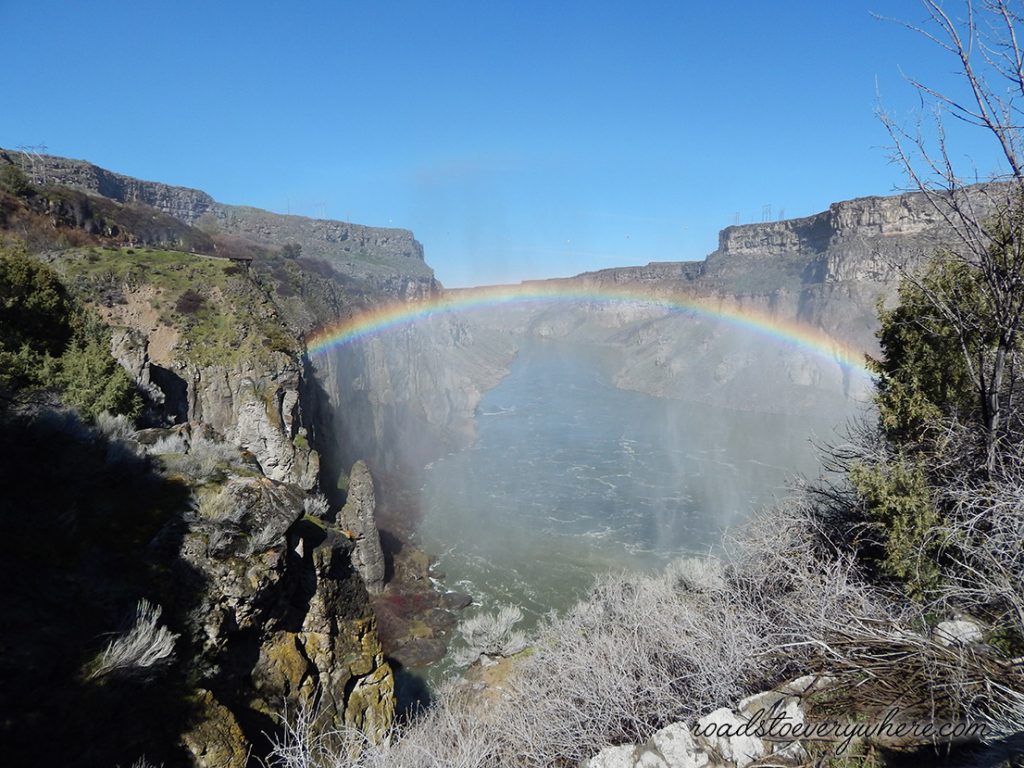 The first thing we noticed was the brilliant rainbow arching across the canyon below the falls. 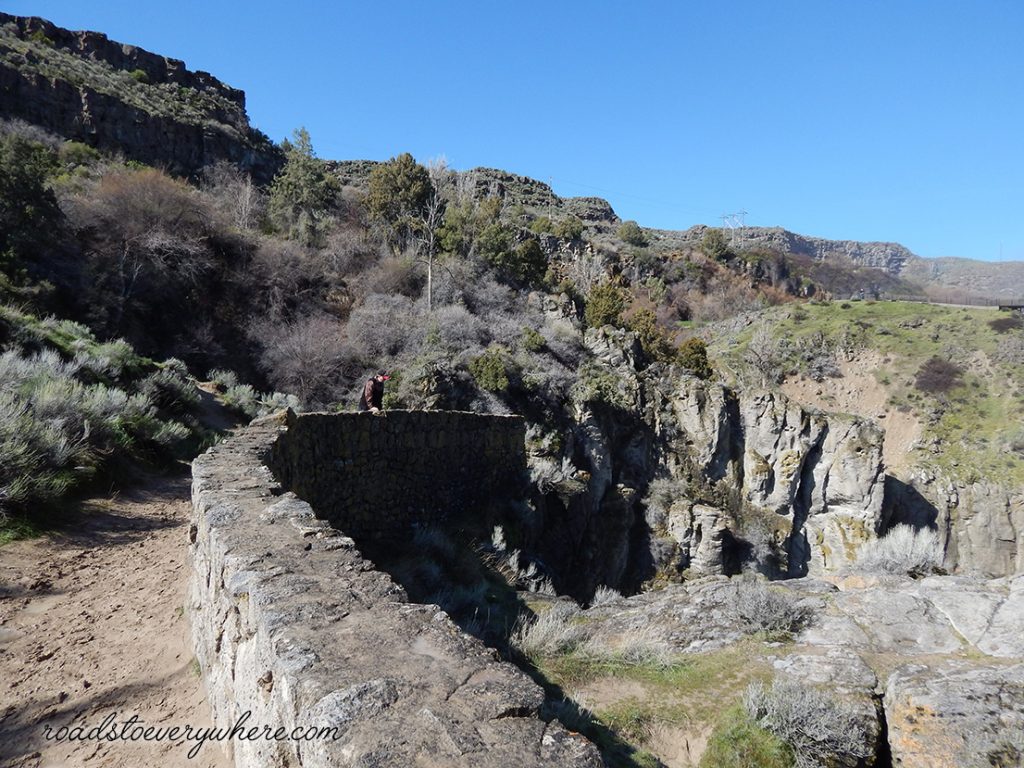 I kept stopping to take pictures so Lyle got ahead of me as we hiked along the canyon rim. I couldn’t figure out what he was so fascinated with. 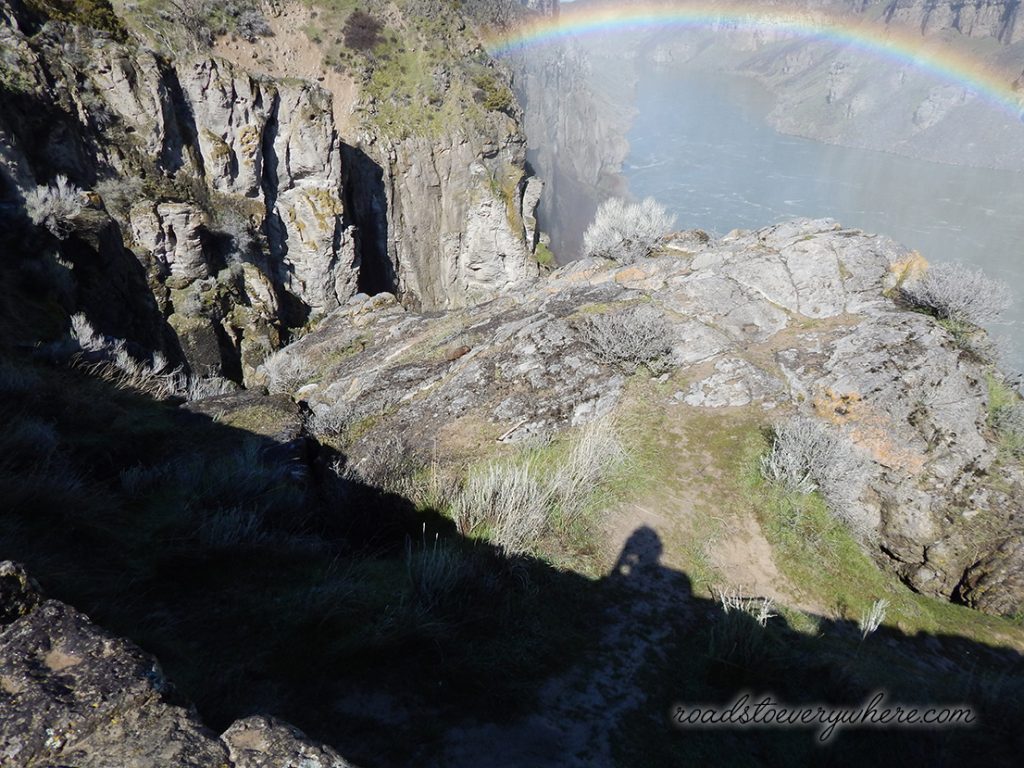 He pointed down but all I could see was the rainbow over the river. We had been admiring that already so I didn’t think that was what he meant. Do you see what he saw? 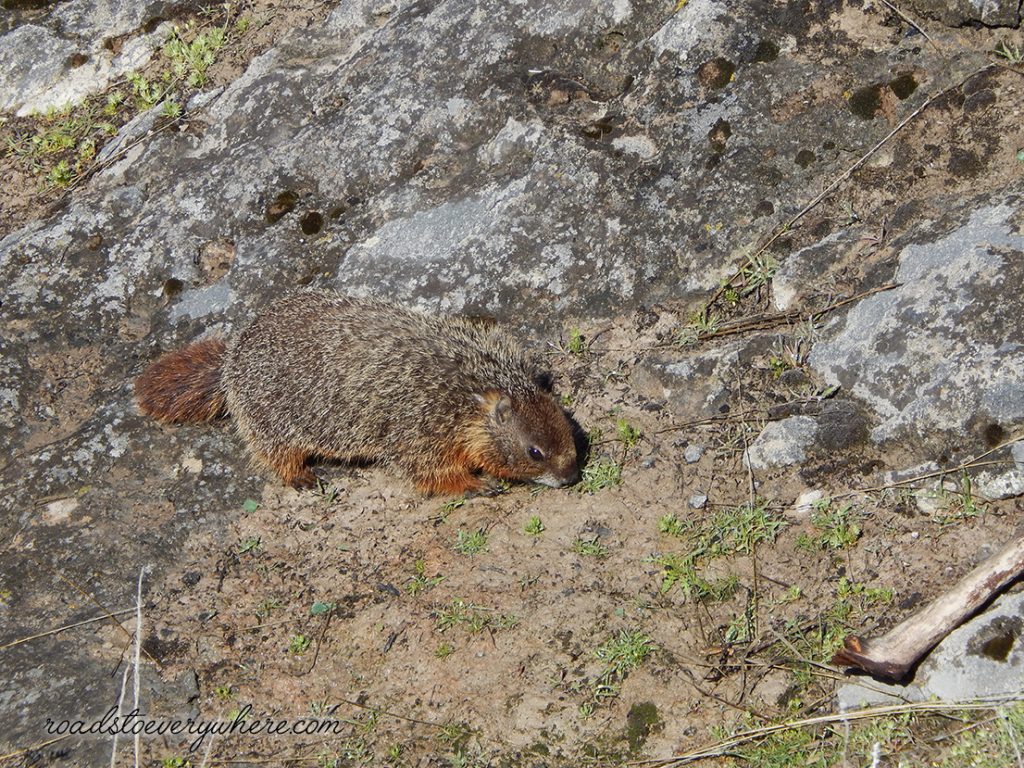 I finally spotted the little critter he was watching and with the zoom lens on my camera I was able to get a closer look. “What is that?” Lyle asked. “Do you think it’s a prairie dog?” 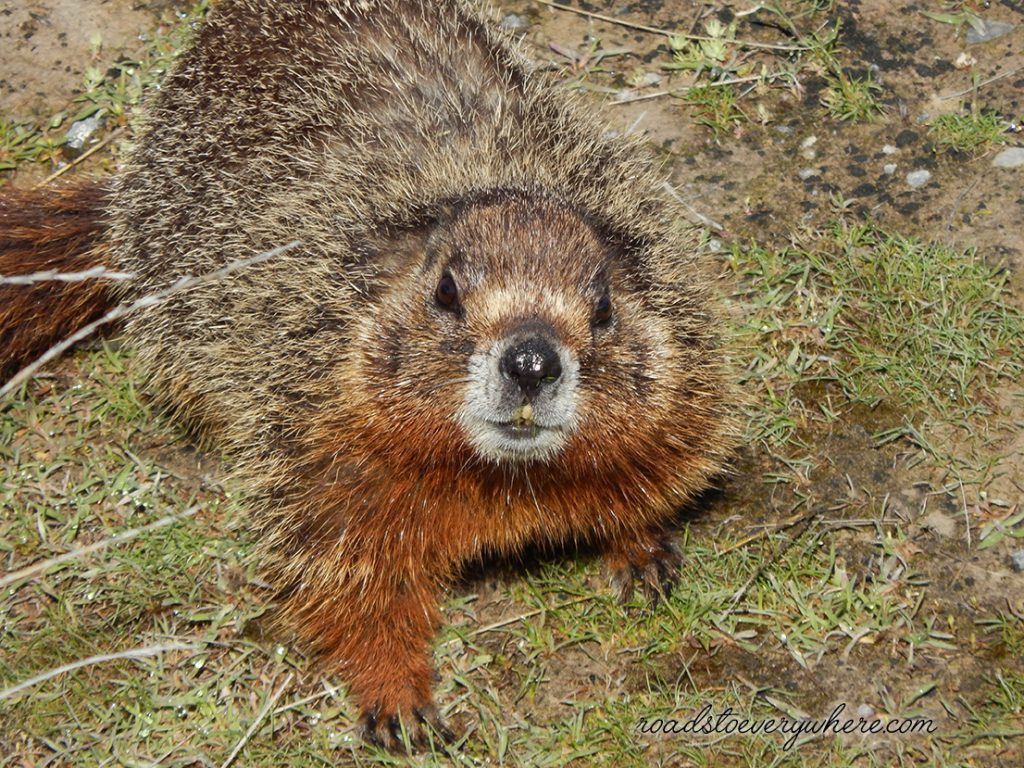 “No, I’m pretty sure it’s a marmot,” I told him. I kept snapping pictures as long as the little feller was willing to pose. And this is why I love a zoom lens! 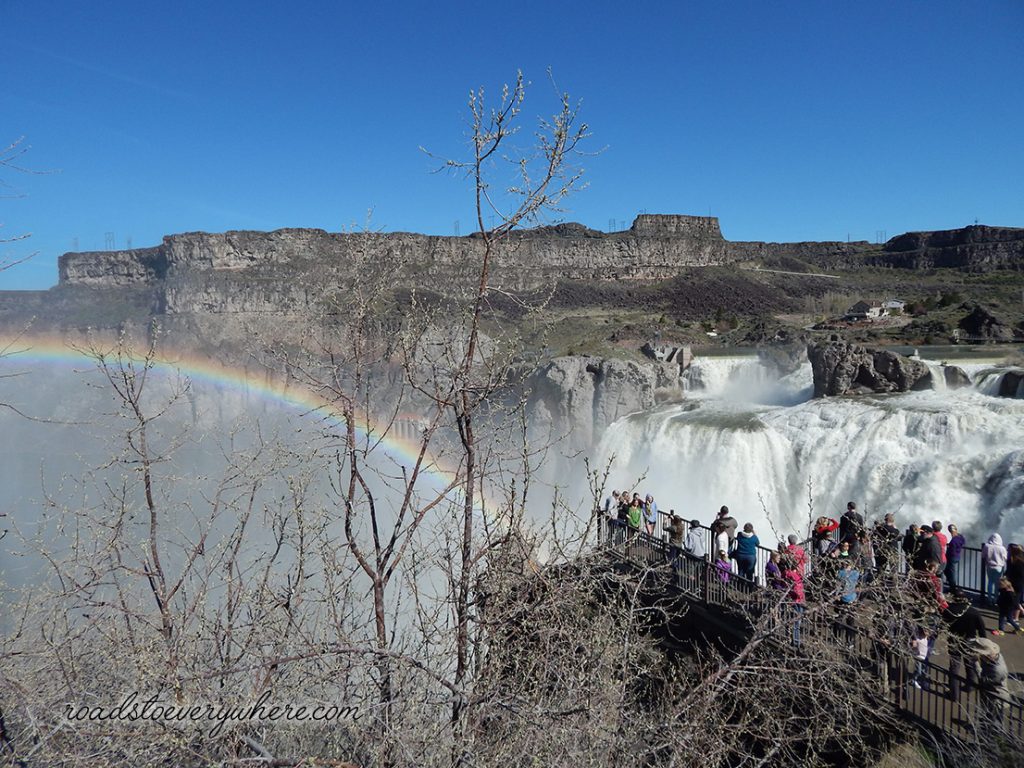 We turned back to admire spectacular waterfall, along with scores of others who had the same idea. 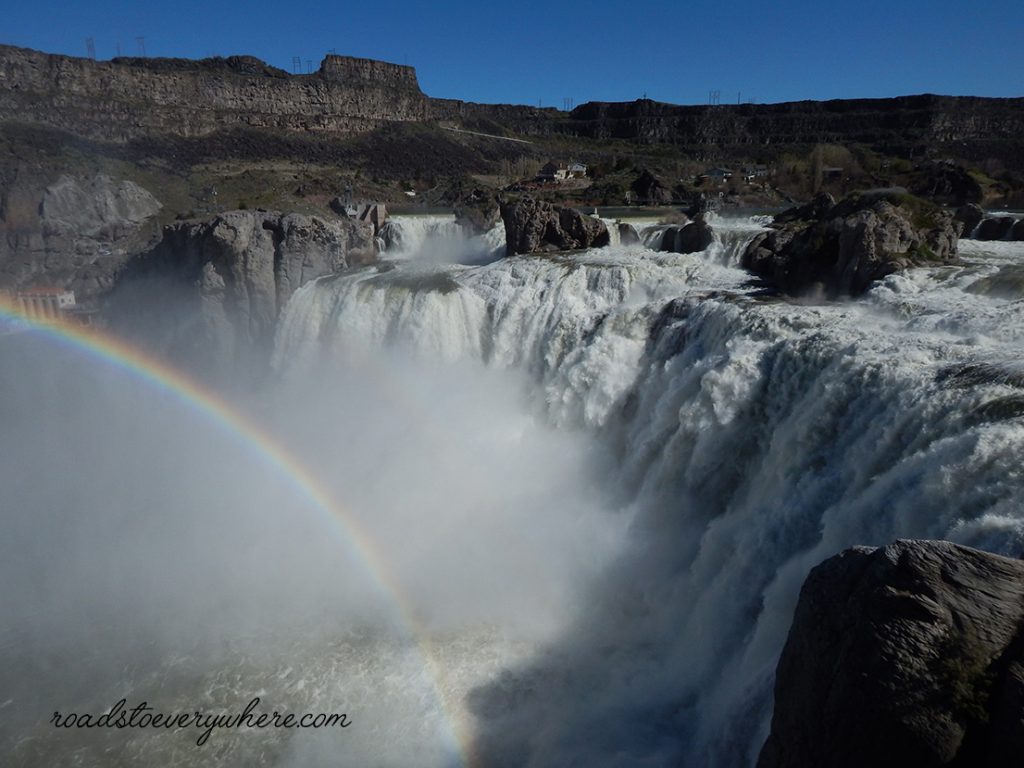 This was our third visit to Shoshone Falls. The first was in July 2009 and then again in July 2015. Needless to say, there’s a lot more water flowing in April than in July, especially since this has been a wet winter. 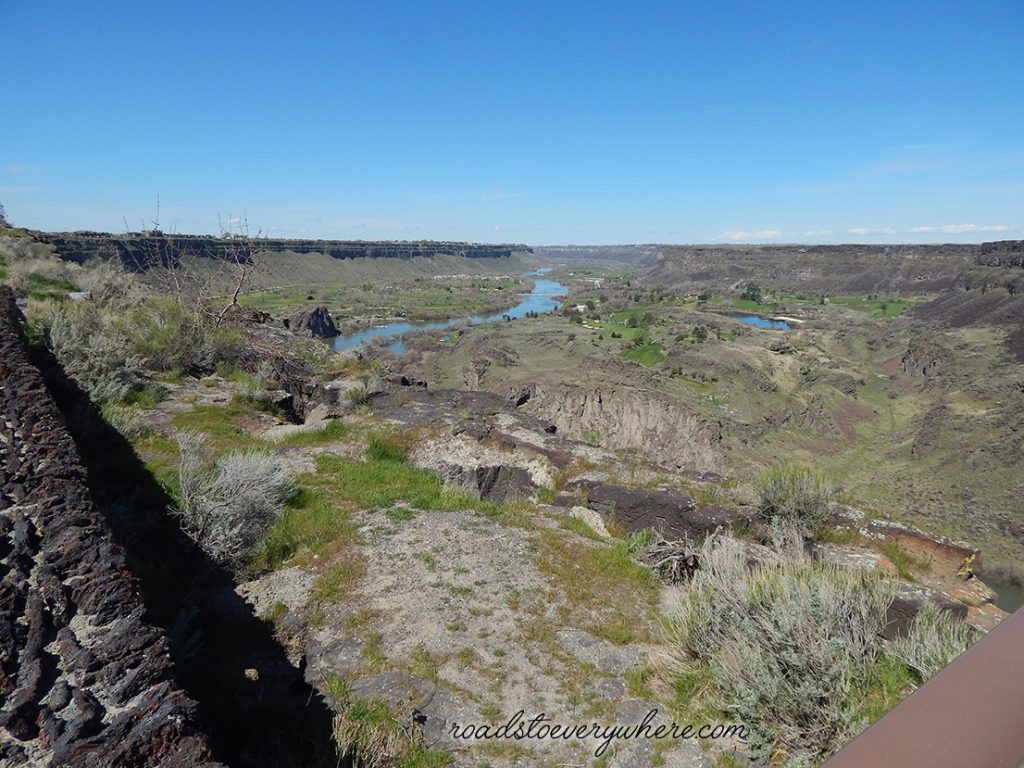 We drove into the town of Twin Falls nearby and stopped at a Visitor’s Center with more views of the Snake River Canyon. 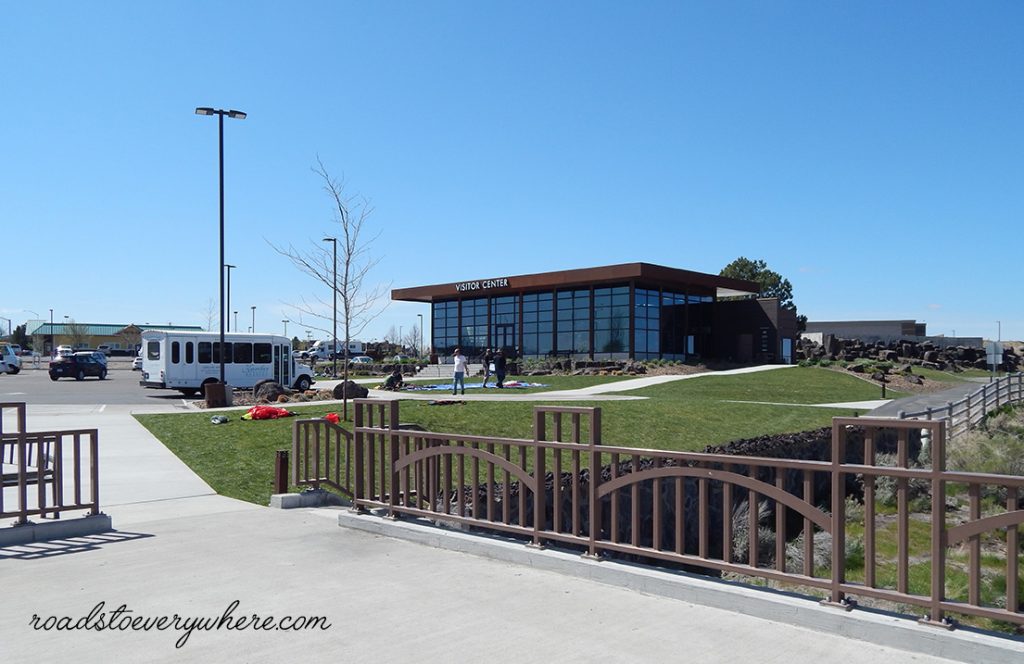 We noticed a number of people rolling up parachutes on the lawn around the visitor’s center. 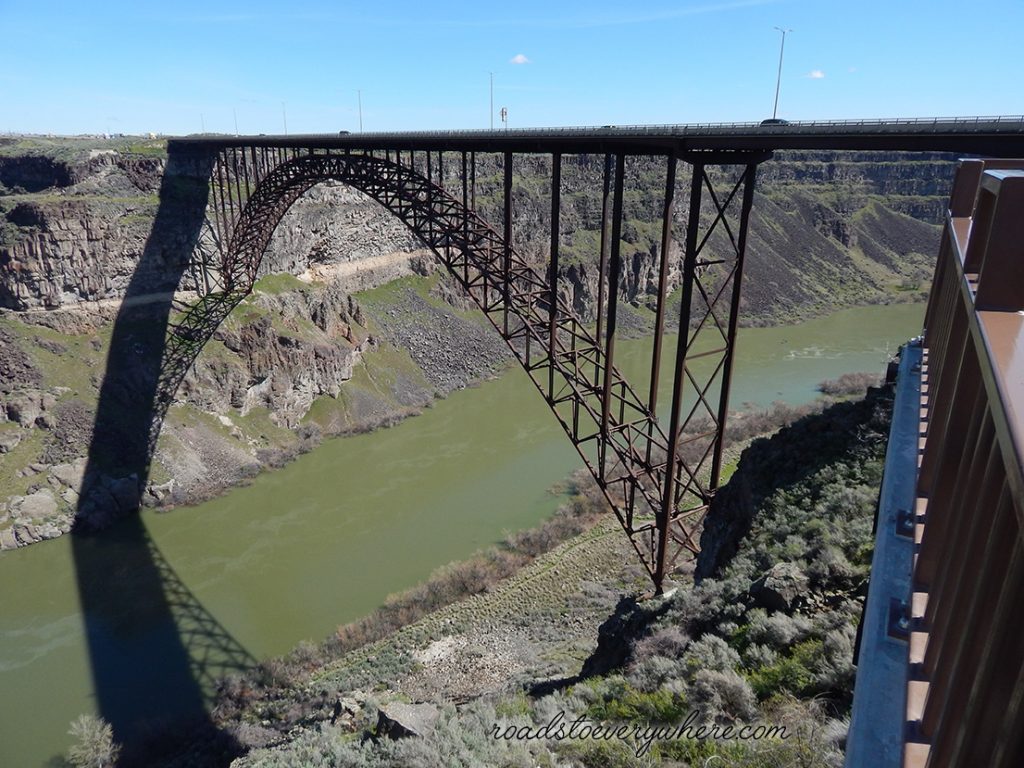 Turns out they were “base jumpers” and they were jumping from this bridge. They would jump, their parachute would pop open and then they would glide onto the river bank. It was a very short ride and kinda dangerous, but I guess it’s worth it some people.

Base jumping is not, nor ever will be, on my “bucket” list. However, visiting a waterfall is on my Spring To-Do List. Check.

I have very tame ambitions.