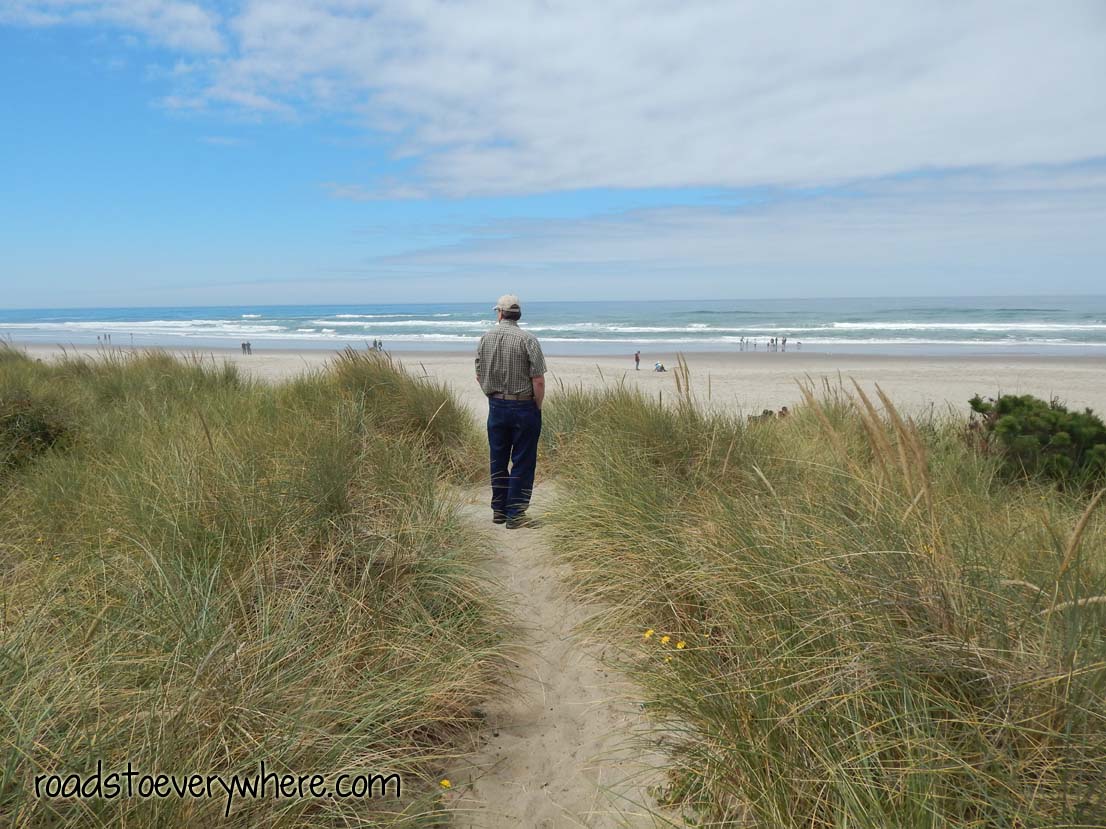 Something Lyle and I have been looking forward to ever since we moved back to Idaho this spring is our traditional* trip to the Oregon Coast for his birthday. 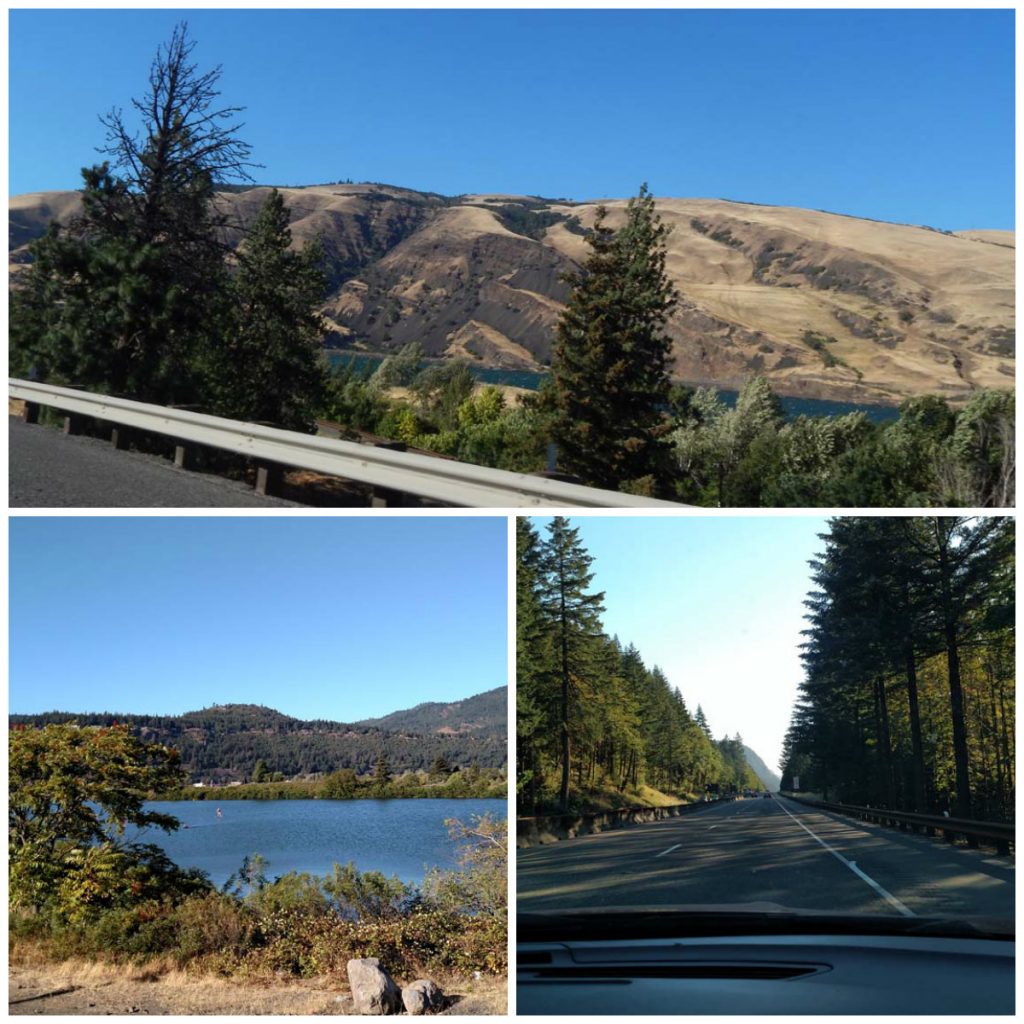 We live in the panhandle of Idaho, just a few minutes from the Washington state line. Eastern Washington is very flat and boring so I didn’t start taking pictures until we got to the Columbia River gorge in northern Oregon. 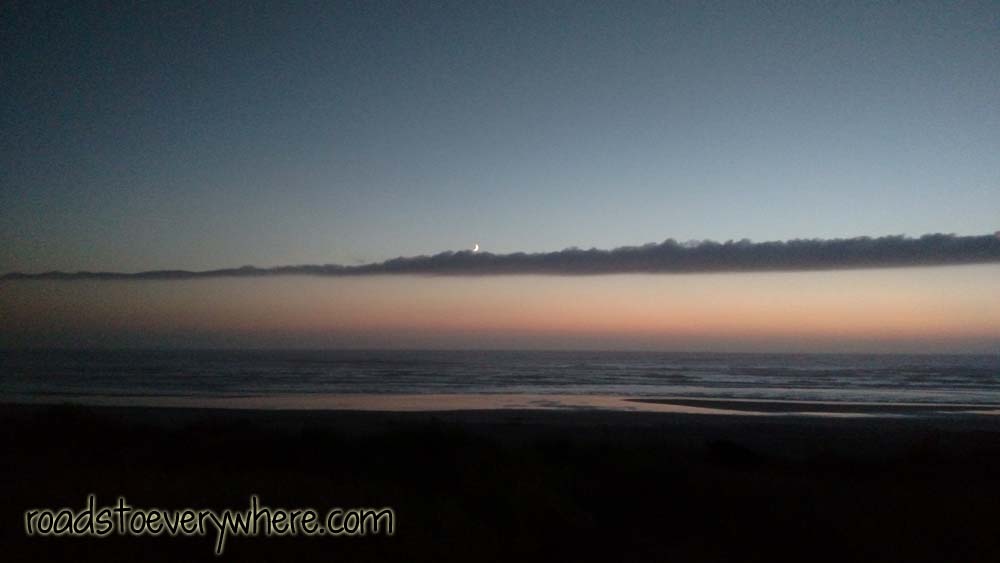 It was almost dark when we got to our hotel in Rockaway Beach on the coast. Our room turned out to be postage-stamp-size, but we opened the window wide and enjoyed the sound of the waves all night. They don’t even shut them off at night, in case you thought they might. 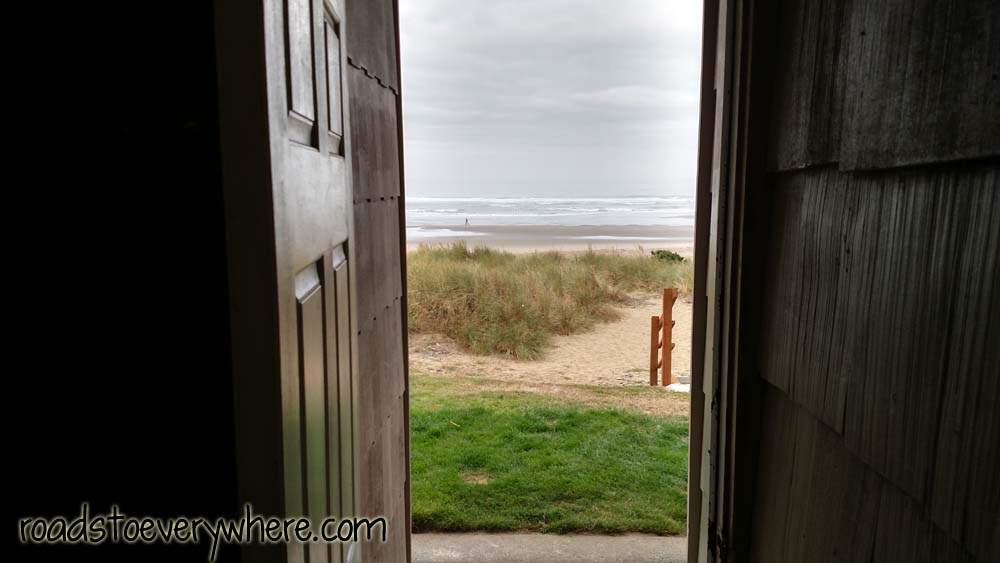 As is normal for the Oregon coast, it was foggy when we got up the next day. This is looking down the little hall that our room opened into. We headed south on Highway 101 to have breakfast at the Tillamook Cheese Factory. 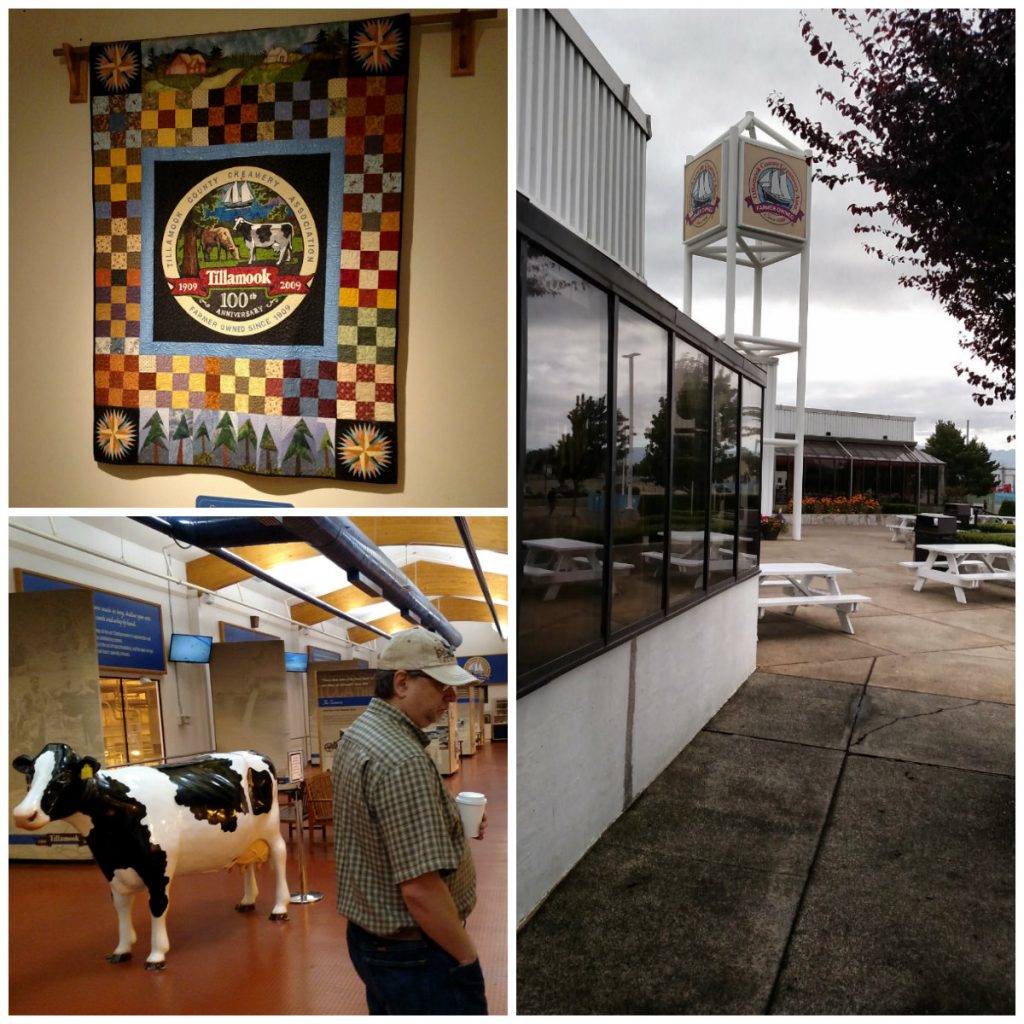 Lyle always likes to stop there when we are in the area. It’s something he remembers doing more than once as a child. 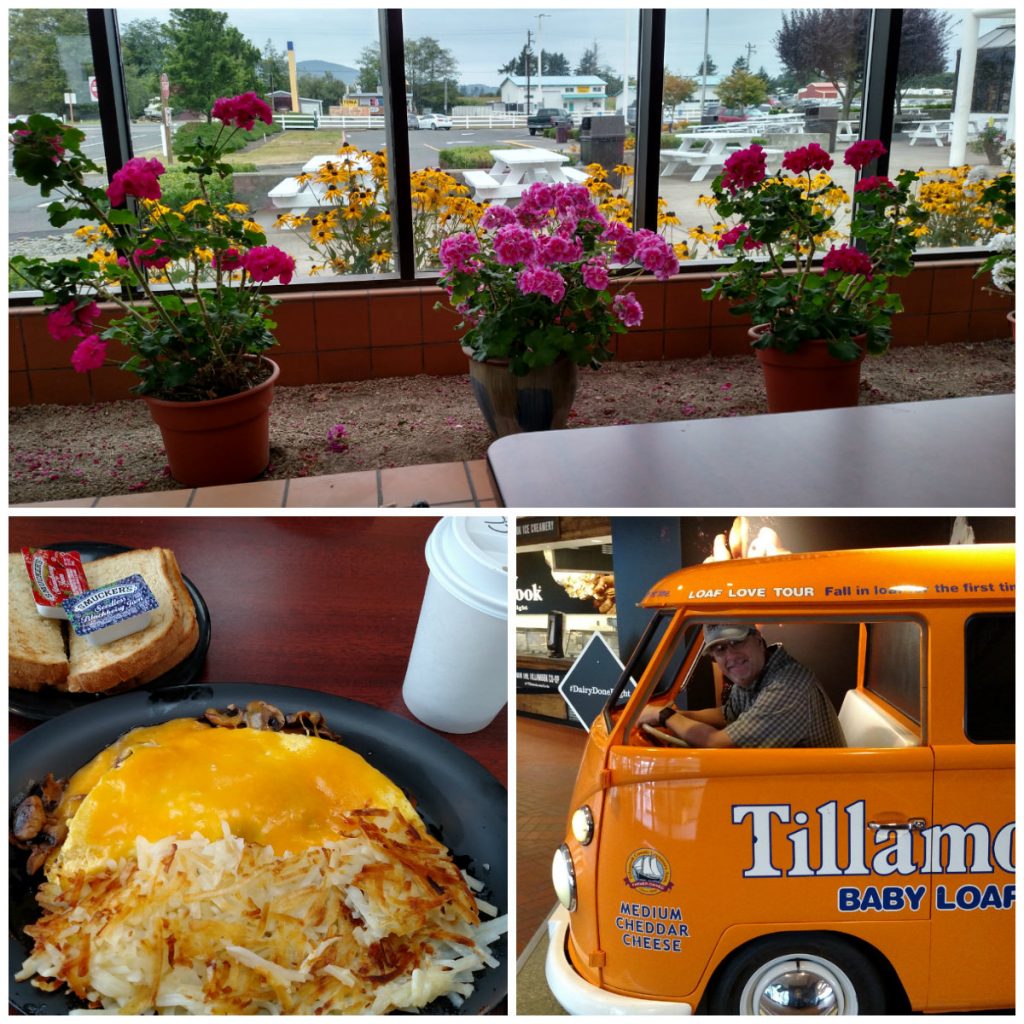 I had him pose in the oh-so-convenient photo-op “van” in the lobby. I had the cheddar mushroom omelet for breakfast. I thought it had too much cheese on it, but Lyle says there’s no such thing. 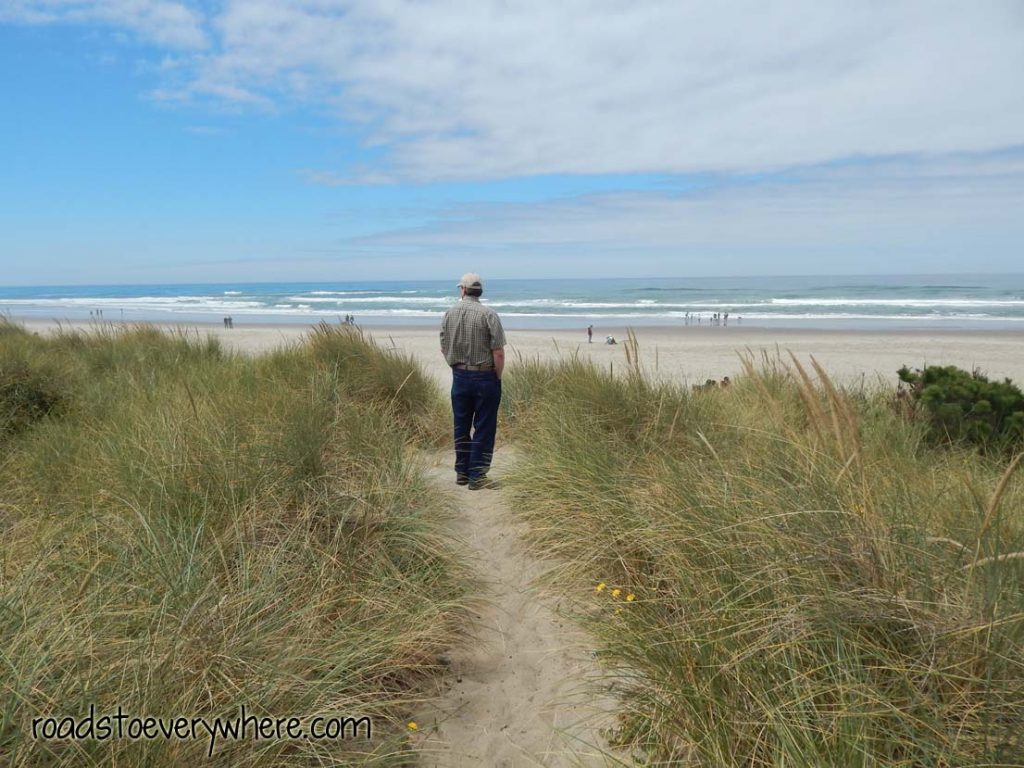 Later, we headed back to our hotel to just hang out on the beach. The Oregon coast is a popular summer destination. The weather is usually breezy and cool, so you don’t have hordes of people laying out in bikinis and what-not… 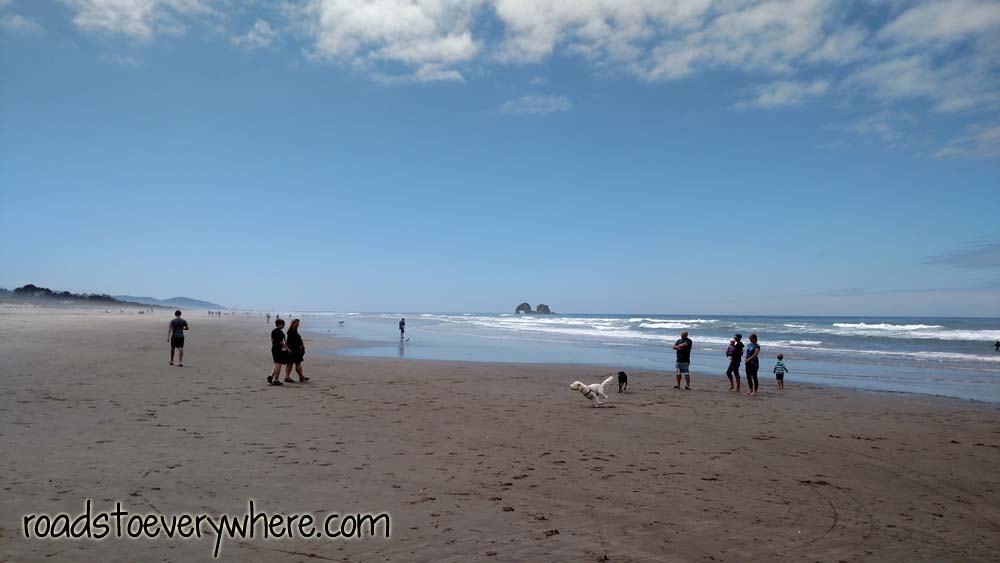 …just a few people strolling along, picking up bits of shells and agates… and happy dogs running around chasing the sea gulls and carrying pieces of driftwood. 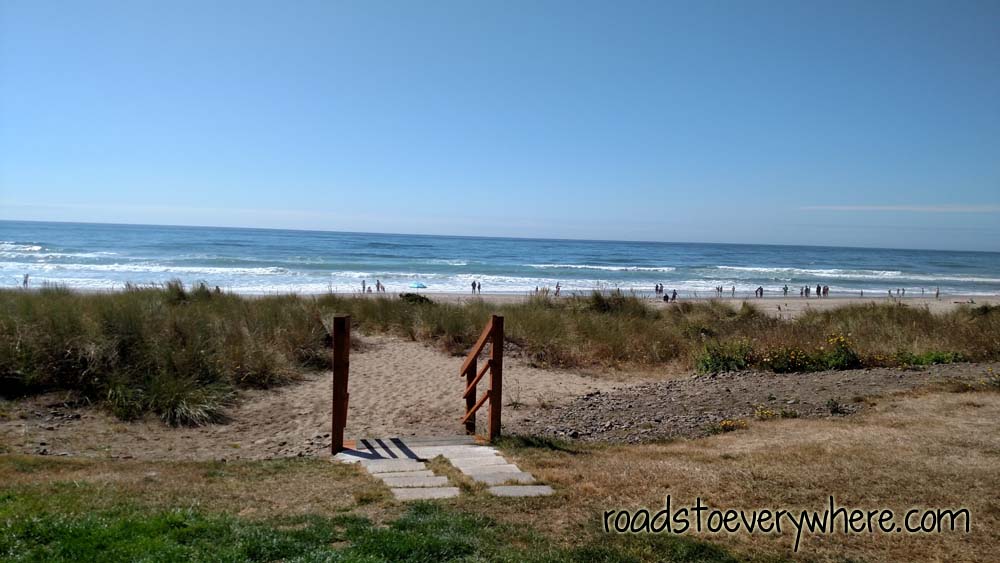 This is about as crowded as it got, even in the middle of the gorgeous summer day. My kind of vacation destination. 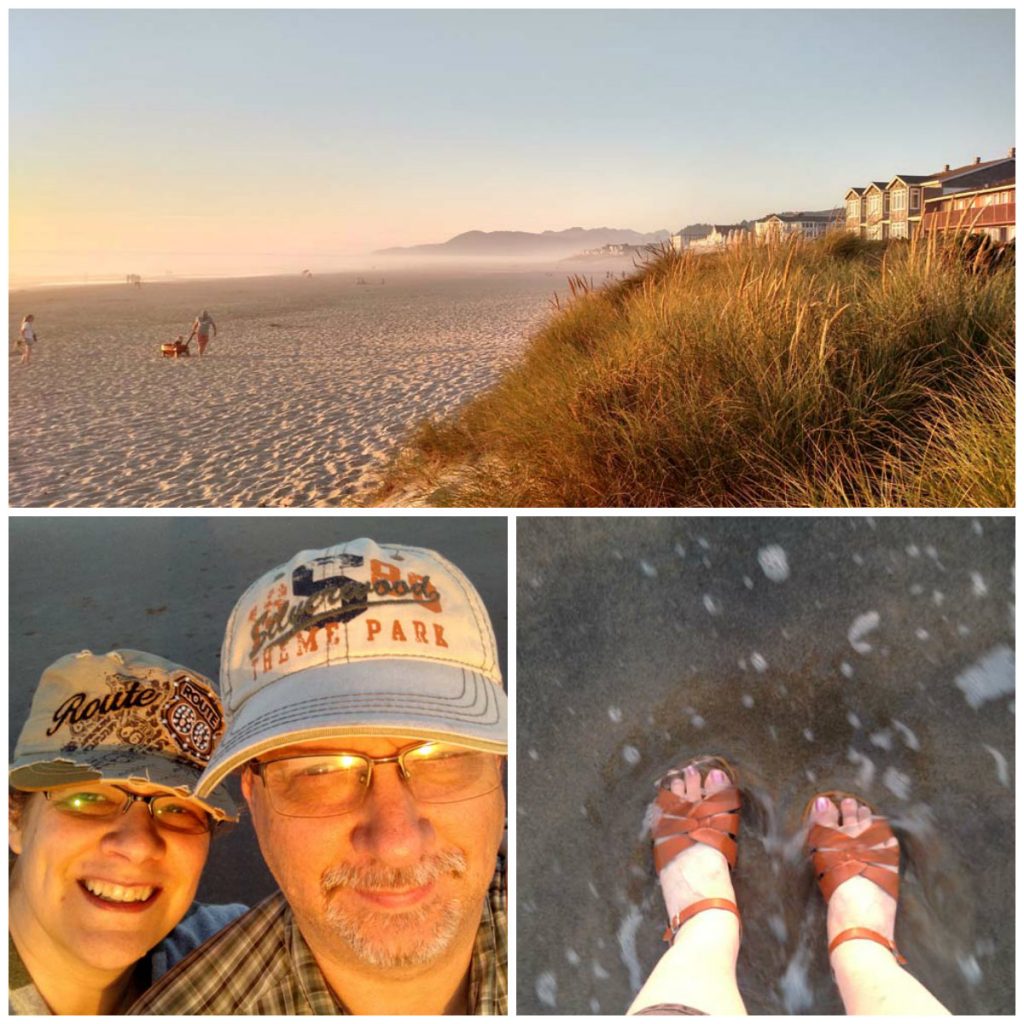 We walked back down to the beach at sunset time. It was cooling off so the fog was beginning to roll in. I attempted to take a selfie of the sun in our eyes (or is it an “ussie” when it’s 2 people? “Weezie?”). First of all, I’m not very good at taking selfies. Secondly, I look silly in a cap. So I took a picture of my feet, too, because I was impressed that my 18-year-old Salt Water Sandals were, indeed, perfect for splashing in the ocean surf. (I bought them in 1998 and have nearly, but not quite, worn them out!) 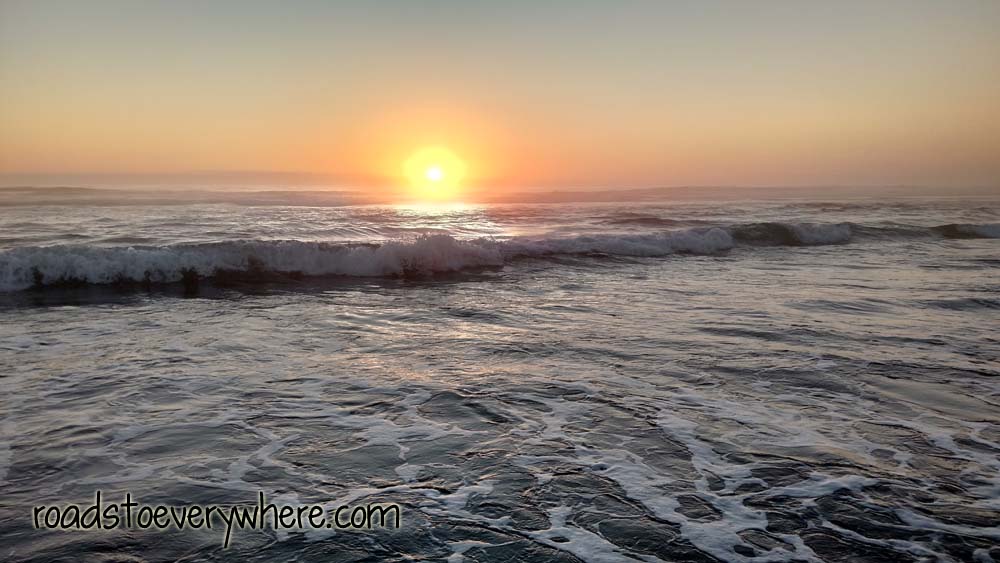 The sunset, as it always is no matter where, was gorgeous. I love to watch the sunset. Always. 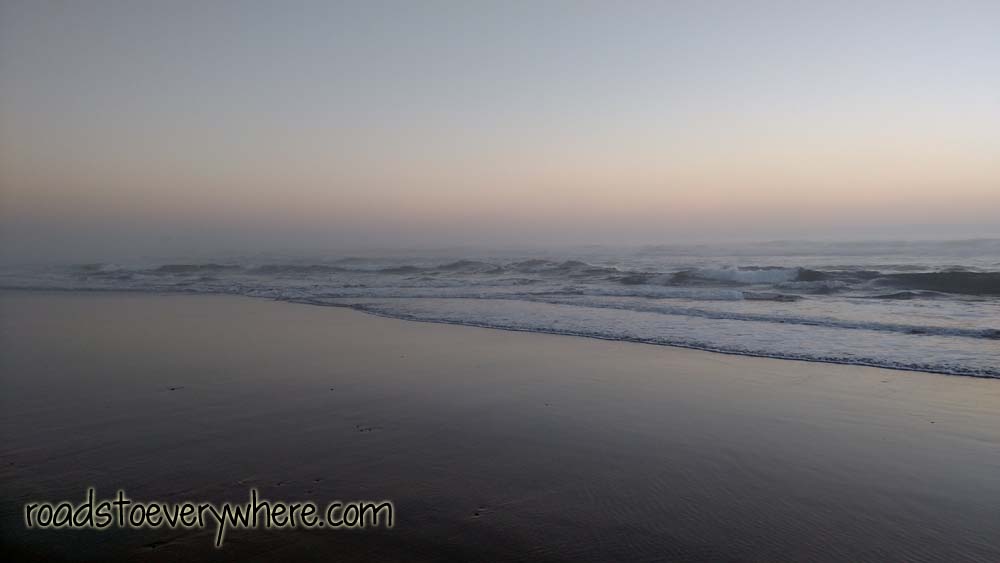 It was interesting to note how foggy it seemed the minute the sun disappeared. 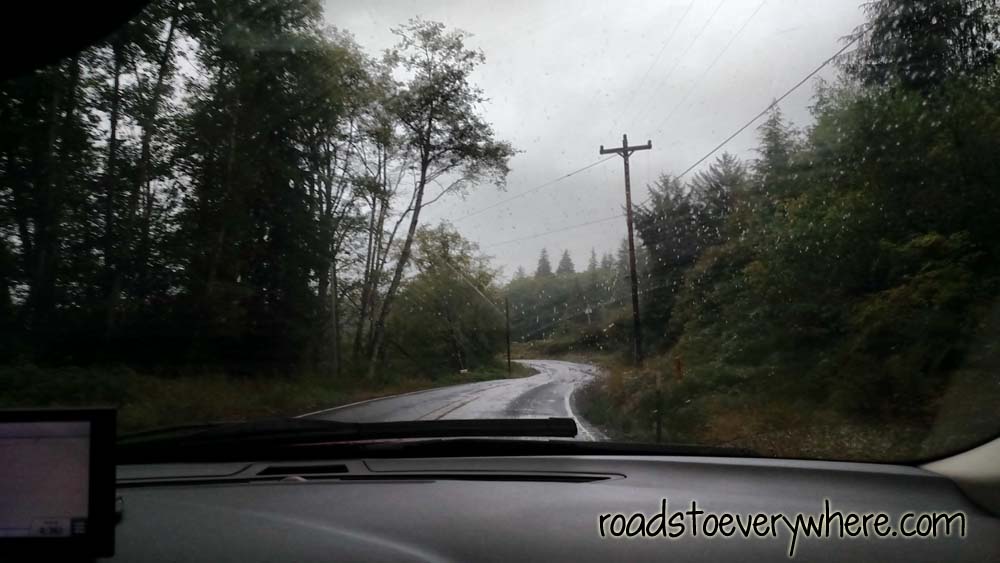 The next morning was rainy as well as foggy as we wended our way home. Lyle chose the curviest route he could find because that’s the kind of driving he enjoys most. 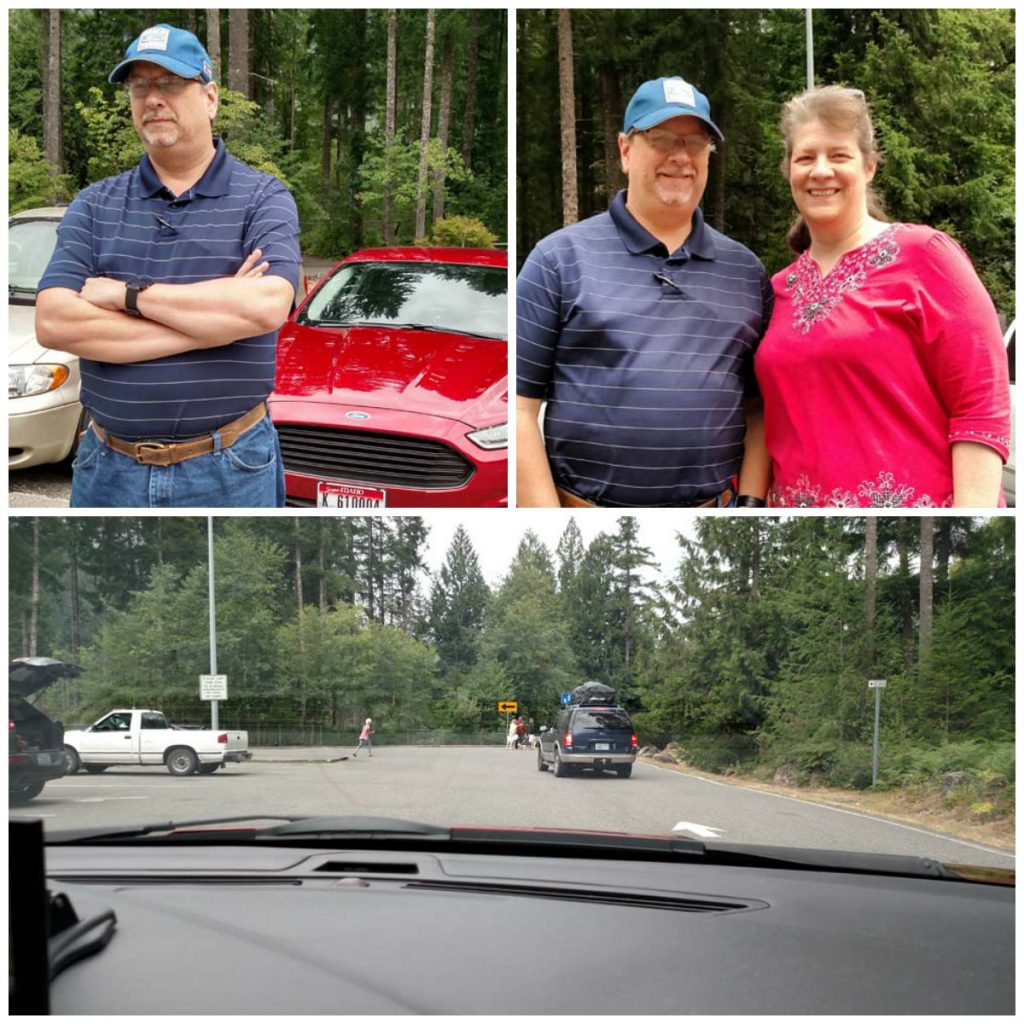 One funny little incident: We had stopped at a rest area in the mountains. I casually snapped a picture of Lyle standing in front of our car. This little old lady came along and asked if we’d like her to take a picture of both of us. I agreed and showed her how to use the camera on my phone. She took a quick picture and went on her way. As we were pulling out I noticed she was taking a picture of another group of people. I snapped a picture of her trotting over to return their camera to them. I guess she was the self-appointed “pitcher takin’ lady” that day. Cute! 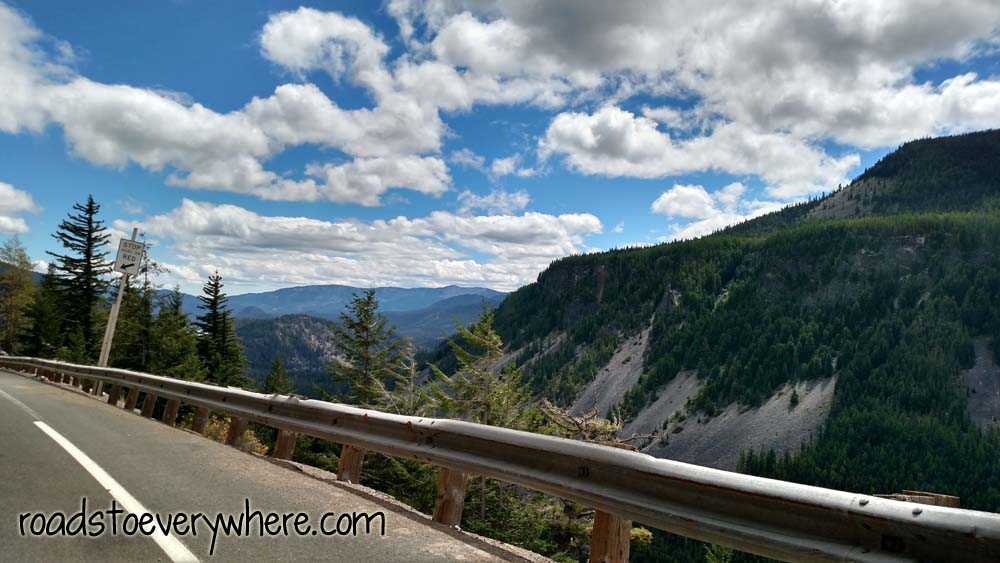 We drove through Mount Rainier National Park, but never did see the Mountain for the clouds. At least it had cleared off some, and didn’t rain on us all the way home.

As usual, it was a lovely little getaway. I’m sure we’ll continue the tradition other years.