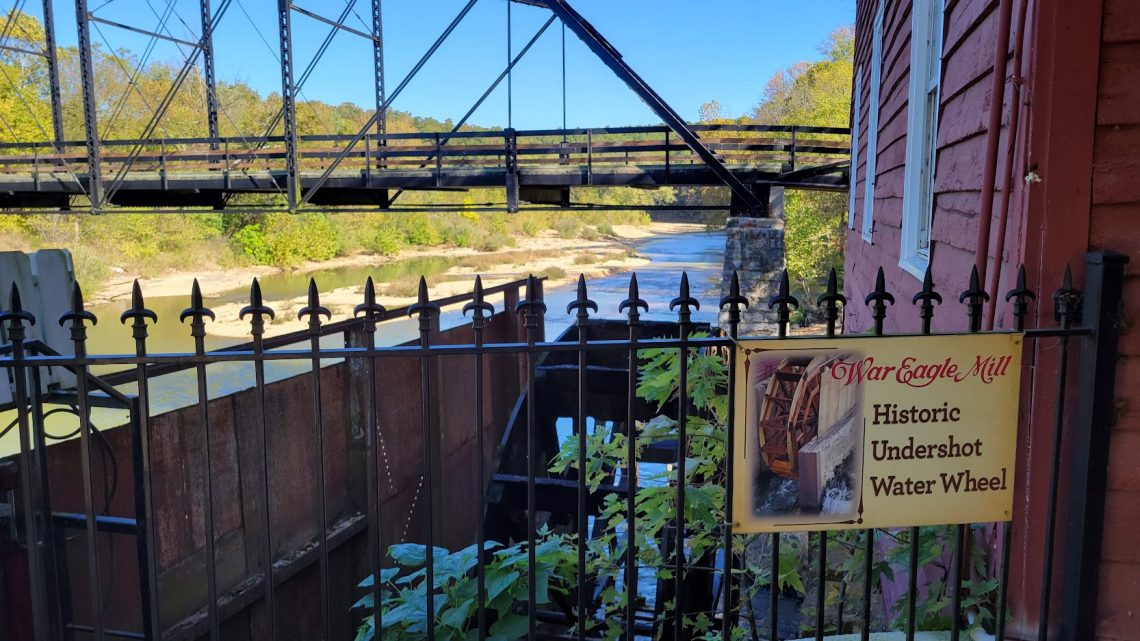 Our adventures this past week took us to War Eagle Mill in northern Arkansas, for a bit of family history combined with a fun fall outing. Rebecca went with us, and we met up with our friend, Janet, so there were four in our party this time. War Eagle is about an hour and a half from us.

The weather was perfect (mid-70s and sunny) and the view was breathtaking as we came around the curve before descending down to the river.

We crossed the rickety old one lane bridge as we approached the historic mill.

Our first order of business was, of course, to go inside. The mill was running, but they weren’t grinding grain while we were there. The mill apparatus takes up about half of the first floor. The other half is a shop where you can buy flour and baking supplies as well as gift items.

The second floor is part of the gift shop with interesting vintage pieces, such as this old cash register, intermingled with the merchandise.

This collage tells more about Sylvanus and Catherine Blackburn who first founded the mill back in 1832 or thereabouts. Keep them in mind because I’m going to circle back around to them in a minute.

The third floor is a restaurant, but it wasn’t quite lunchtime so we decided to go back outside and poke around a bit before we had lunch.

I mentioned that the mill wheel was turning, but I thought it was strange that water wasn’t pouring over it. I couldn’t understand what was making it turn.

The explanation is that it’s an “undershot” wheel. Even after studying it visually I had to have Lyle explain to me how that worked.

Down the road a little ways is this intriguing old building. I’m assuming it was once a store, but whatever it was, the sign in the window informs us that it is now Closed.

Janet and I would have loved to investigate further but it was Posted: No Trespassing. For good reason, I suppose.

It was across the road from the “War Eagle Public Library” that I showed you in my Missouri Adventure post last month. I was pleased to see that the books I left that time were gone, so I traded another one.

Then we walked back across the bridge.

A historical marker told us more about the Blackburns and the mill, along with a little Civil War history.

March 8, 1862. Generals Van Dorn and Price, retreating from the battlefield, bivouacked 10 miles south of Elkhorn. The next day they reached the Blackburn-Van Winkle area where abandoned homes housed the sick and exhausted. While Curtis was in camp at Cross Hollows before the battle Col. Grenville M. Dodge ground corn in Blackburn’s mill.

Another sign indicated this was the Blackburn Homestead with the Original Two-Story Log Cabin. We couldn’t decide if the white house was the original two-story log cabin (which was covered with siding, not logs)…

…or if the log cabin back behind was the original, but it didn’t appear to be two-story. So we were a little confused about that. We wished we could go in them as well, but they don’t seem to be open to the public.

We headed back to the little restaurant at the mill for lunch, before embarking on the family history segment of our adventure.

According to some preliminary research I had done, there is a War Eagle cemetery. The GPS wanted to take us on a round-about way to get there, and by following it we went down an entirely WRONG road and experienced a scary, tight turnaround maneuver. Fortunately, we had a skilled driver so we were soon back on the right track.

The cemetery is actually only a mile or so from the mill, but it’s hidden back in somebody’s pasture down by the river. The arched headstone with the double pillars right in the middle of the above picture marks the grave of Sylvanus and Catherine Blackburn, founders of the mill.

Several of their children are also buried in this cemetery, including their son Josiah Hackney Blackburn, along with his first wife, Mary. I don’t know if you can make out the dates of her lifespan but she died in November 1850 at age 23. They had been married less than a year.

The next summer, in June 1851, Josiah remarried. His new wife? My great-great-great grandmother, Orpha Dorinda Garrett Easley, who had been widowed 2 years earlier when her first husband, Burnet Easley, died on the way to the California gold rush. She had two little boys from her first marriage, one of whom was my Granddaddy’s “Grandpa Easley”–Francis Marion Easley.

You may remember my post in the fall of 2019 when we visited the graves of my Oregon Trail pioneer ancestors. They were Dorinda’s parents. She didn’t go with them to Oregon because she was married at the time. I guess. Seems they went about 1850 or 1851, so she might have been between husbands, but in any case, she didn’t go.

I’ve been told that she left her little Easley sons to be raised by their grandfather, William Easley, and went on to have six more children with Josiah Blackburn. They did live fairly close and probably visited back and forth a lot, so maybe it just seemed like they lived with their grandfather.

This is the only picture I’ve seen of Dorinda and Josiah. I expect the child in the picture is their oldest daughter, Phoebe Catherine Blackburn, who was born in 1853.

Back at the cemetery, I thought it was a little odd that Josiah was buried with his first wife, even though he was only married to her for about a year. They died 45 years apart. He ended up being married to Dorinda for almost all of that time, but she was buried in a completely different cemetery when she died a year after he did. And no, she wasn’t buried with her first husband because, remember, he died “somewhere in Utah” on the way to California and was buried in an unmarked grave along the trail.

So where was she buried? Findagrave.com to the rescue!

We found Dorinda’s grave in a cozy little cemetery next to a church in Hindsville, about 12 miles or so from War Eagle. Apparently, Josiah and Dorinda lived in Hindsville later in life as they both died there, about a year apart. We wondered if the church has been there all this time and maybe they went to that church. We didn’t find any graves that would have been there before hers. There are four blocks marking the corners of her plot, so I wonder if there was some kind of little fence or rail around her grave at one time. This cemetery is well-maintained and many of the graves are lovingly decorated. Next time I’m over that way I will try to take some flowers for Great-great-great-great-grandmother Dorinda.

And that was our adventure for October! Cemeteries, mysteries, and all, on a bright blue sunshiney day.