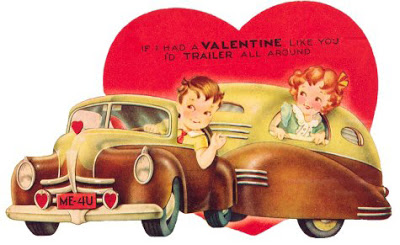 Vintage Valentines cards are so much fun. I think my favorites are from the mid-20th century. The artwork is so sweet, and the puns are so lame!

Here’s a darling one I came across recently and “sent” to my husband, just because of the vintage car and trailer. I have no idea what the message means: “…I’d trailer all around.” Is that supposed to be a pun for “trail her”? I dunno. But check out the license plate: “ME4U”! Too cute!

Here’s another car-themed one that I saved. It’s much more straight-forward in its message: “Let’s go together!” Yes, let’s!

Here’s a patriotic Valentine… probably from World War II, wouldn’t you think? I’m not sure. But look at the pun on “US”! With red, white, and blue stripes even. So creative! 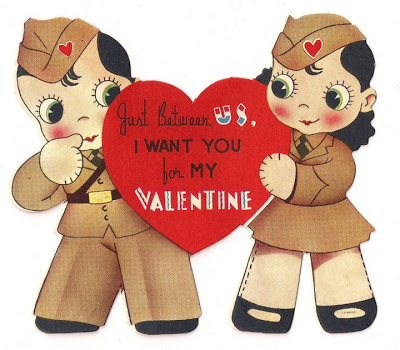 The cards above are ones I have come across on the internet and saved just because I like them. I also have a few that were among my Grandmother’s scrapbook and letters that my mother saved and has let me archive. Here’s one from 1934 that she received as a teenager from one of her Sunday School pupils: 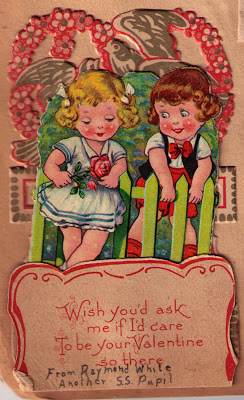 It’s actually a pop-up card. The lower part folds down and the other pieces then separate for a three-dimensional affect. Pretty elaborate for a little Sunday School boy! Wonder if he had a crush on her?
This one is from probably the late ’50s or early ’60s when my grandparents had young children at home. It’s personalized! Towards the bottom of the heart on the left is a little penciled notation “Daddy” with an arrow pointing to the boy, and just above the heart on the right is the corresponding notation “Mother” with the arrow pointing to the girl. 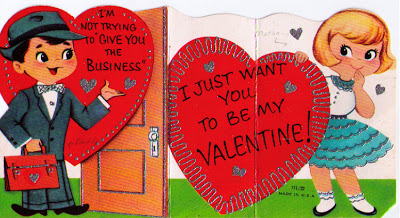 It looks like Granddaddy’s handwriting to me (but I have to admit, it’s kinda hard to tell, being so small and light)… so I wonder if he chose it from a box of Valentines that one of the children had to give their classmates, and labeled it to give to Grandmother? It seems like something he would do. They called each other “Daddy” and “Mother” for as long as I remember… and for much further back than that, I’m sure.
Happy Valentines Day!