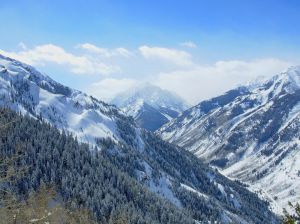 This week I’m in Colorado to network with the other Sonlight consultants, to learn more about upcoming products for 2012, and to get some fresh ideas for the homeschool convention season. I’ll be hosting the Sonlight booth at 5 different homeschool conventions this year. I love visiting with fellow homeschoolers and sharing my passion for Sonlight. That’s why I become a consultant. However, sometimes I think it would be nice to get to go to a convention as “just an attendee” again. This training time at Sonlight’s headquarters has become that “shot in the arm” that I look forward to each winter. It’s always an intense few days but I come away refreshed and excited about finishing out the school year, and traveling to my conventions.

There’s a good bit of snow on the ground, due to the record-breaking storm they had last weekend, but so far the days have been sunny and relatively warm. As always, the mountains are spectacular.

And now, I’m off to another day of workshops. I’ll be back next week.