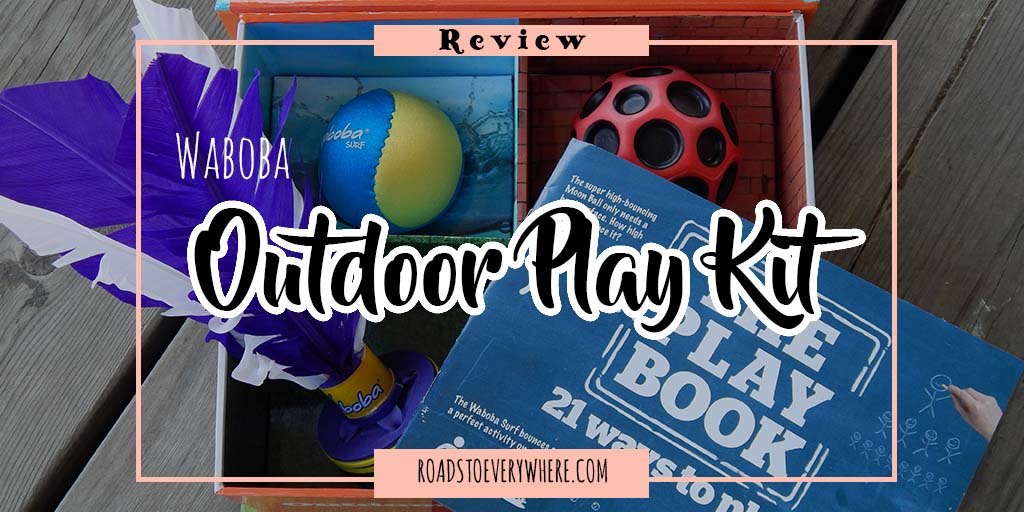 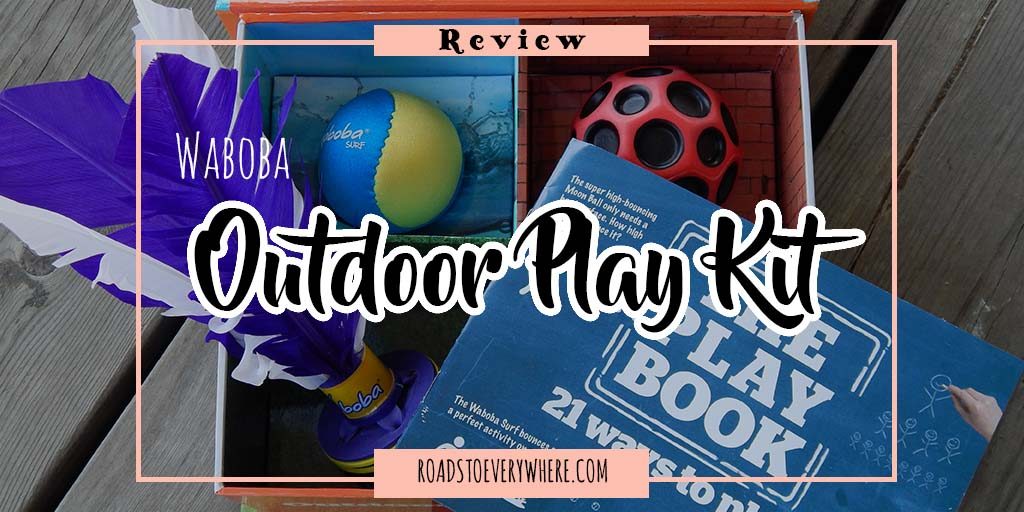 With all the camping we’ve got going on this summer I was excited for the opportunity review the Waboba Get Out and Play 3-in-1 Outdoor Active Play Kit. Timberdoodle sent it to me in exchange for my honest review.

Actually, it has nothing to do with camping. Except. It’s just the very kind of thing I like to take along for the kids to do while we’re enjoying the “great outdoors.”

What’s in the Box? 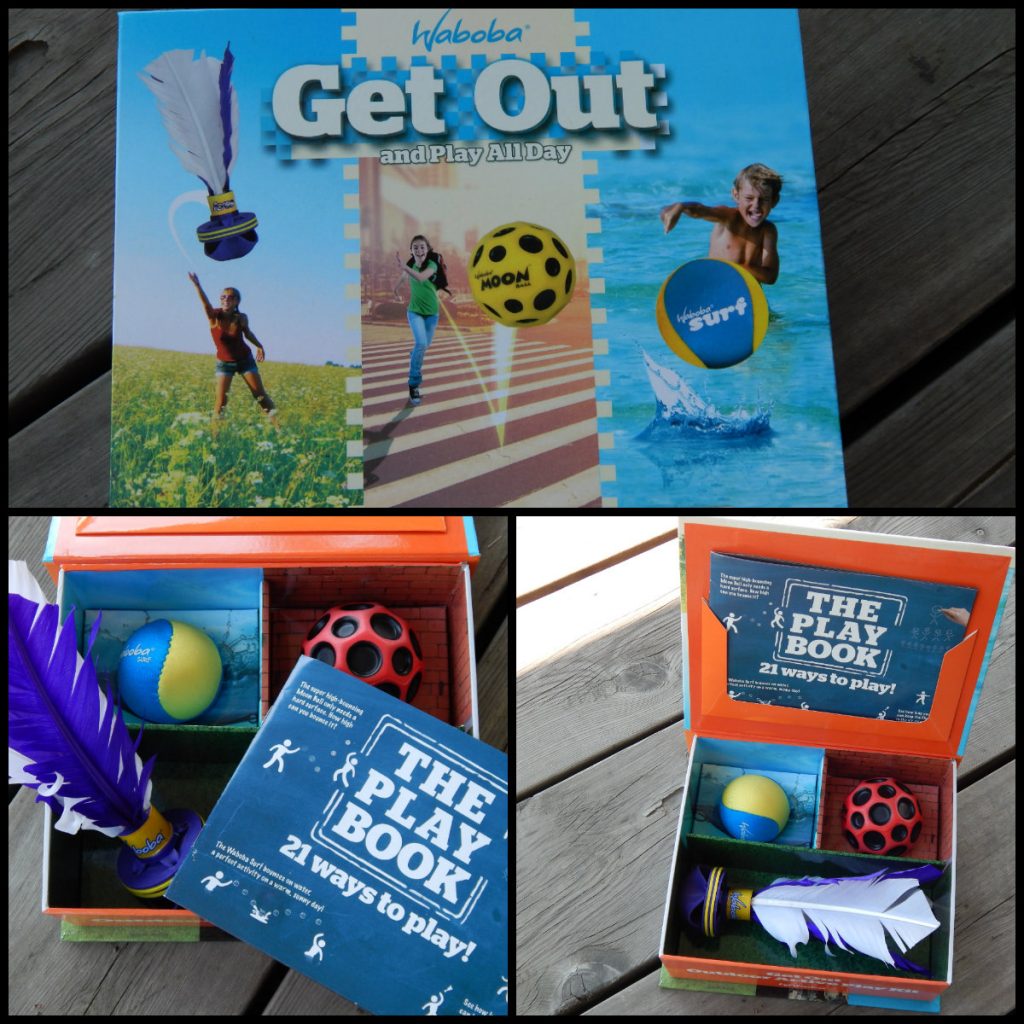 The Outdoor Play Kit comes nicely packaged in a magnetized box. That means the lid stays closed when it’s closed, even if it’s turned upside down. There are 3 compartments plus a pocket in the lid for The Play Book.

I thought it was cute how the compartments in the box are “wallpapered” to indicate which “ball” belongs where.

It does also come with The Play Book which gives rules for 7 games you can play with each ball (21 games in all). I like that the games are varied enough that there are options for anywhere from a single player up to a large group.

What did my family think of it?

I asked my girls to try it out, take pictures, and give me their feedback. For the record, the “girls” are 21 and 24, not little kids. Still, I fully expected them to love this set.

I was not wrong. 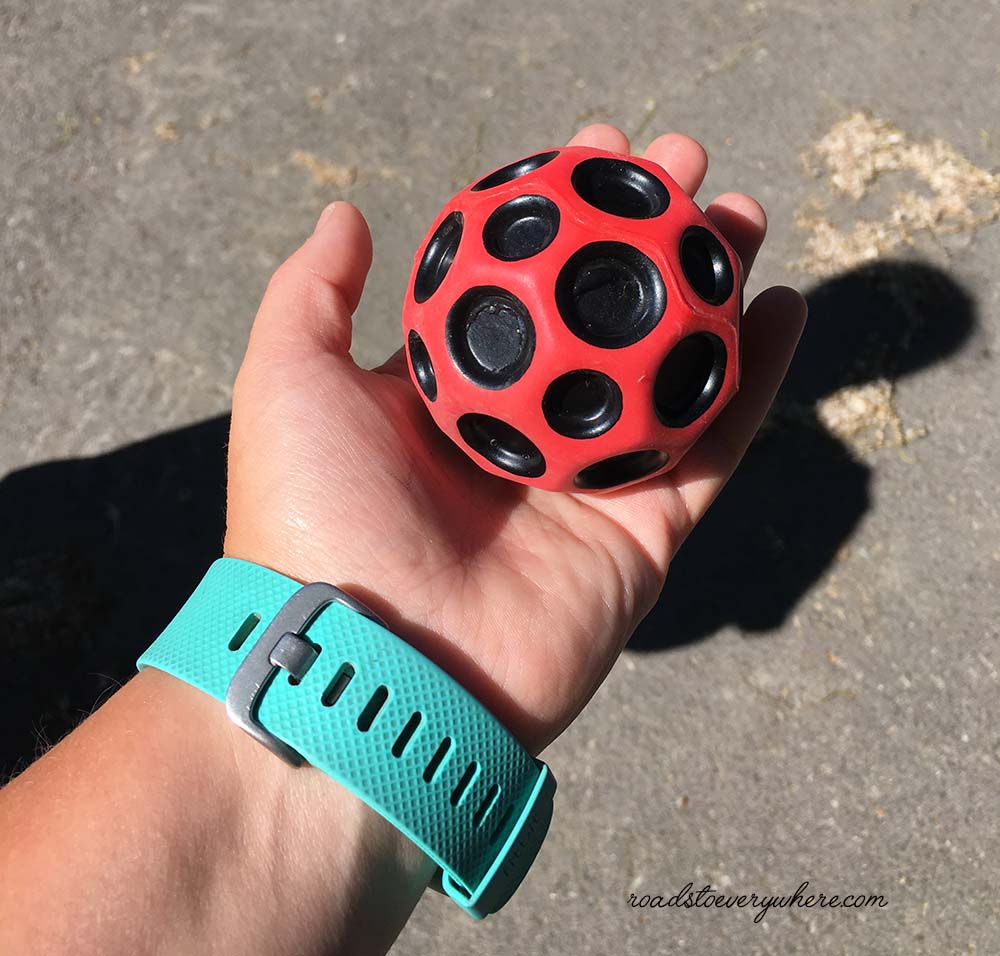 The first ball out of the box was the Moon Ball. It’s about the size of a baseball but rubbery with “craters” in it.

And boy, does it bounce! 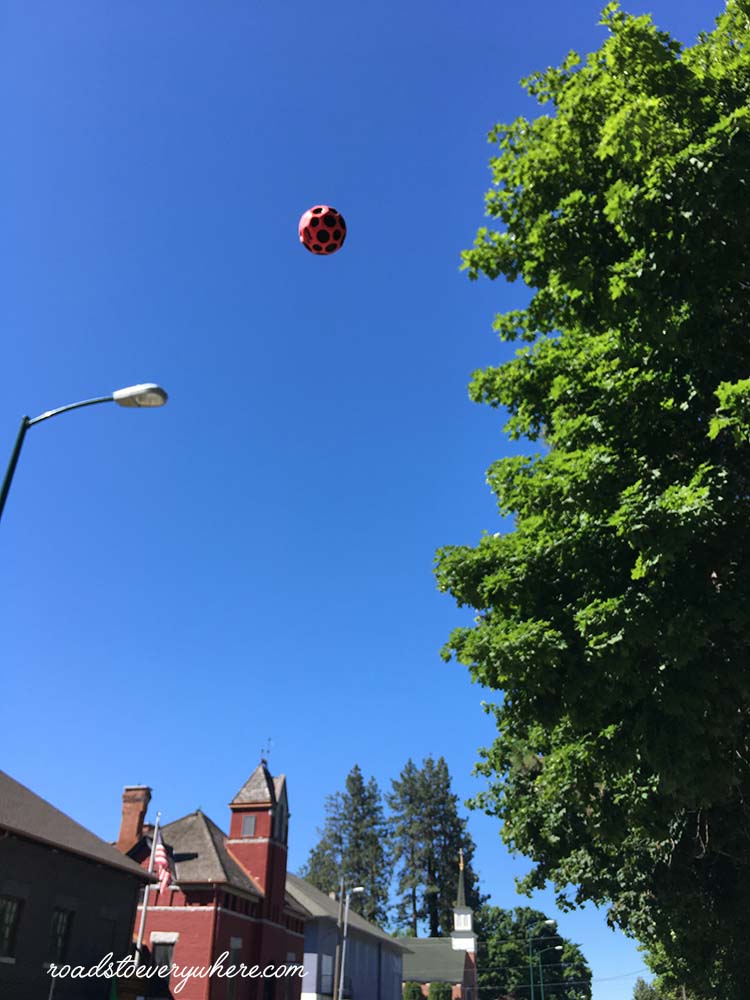 The girls loved seeing how high they could get it to go. It really wasn’t up above the light pole, though the angle of the photo makes it seem like it. But it was pretty high.

Also, it makes a lovely “thwonk” every time it hits the ground.

Next, they decided to try the Surf ball. 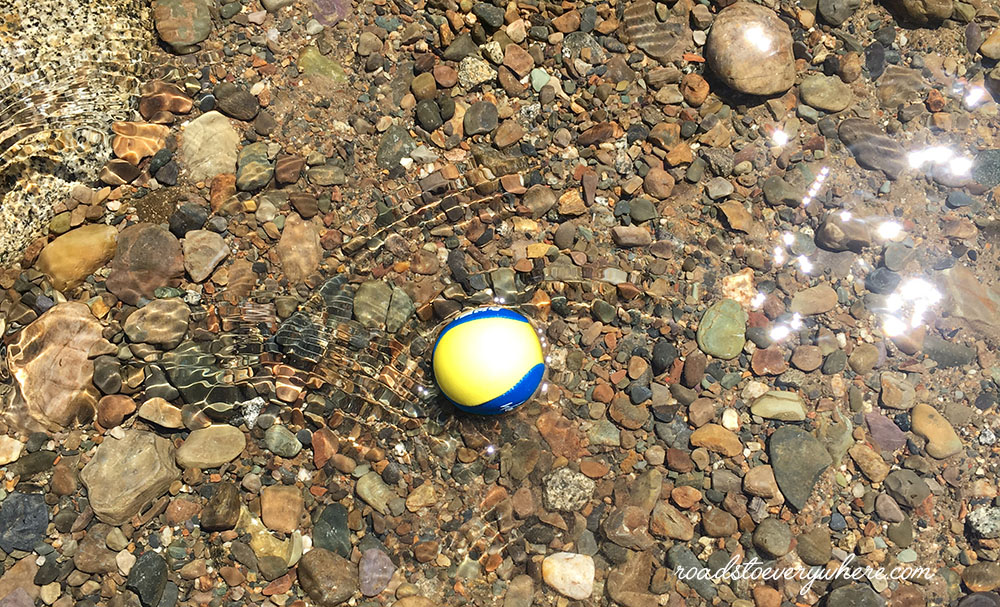 It’s soft and squishy, covered with spandex or something like that. It’s a little smaller than a tennis ball. It reminds me of a hacky-sack but it’s not that dense and heavy. It does not bounce much on the ground.

“It’s supposed to bounce on water,” I told the girls.

Laura tossed it in the hot tub.

“Um. No. It doesn’t even bounce on water,” was her conclusion.

“Take it down to the creek and try tossing it sideways, like you were skipping a rock,” I told her. 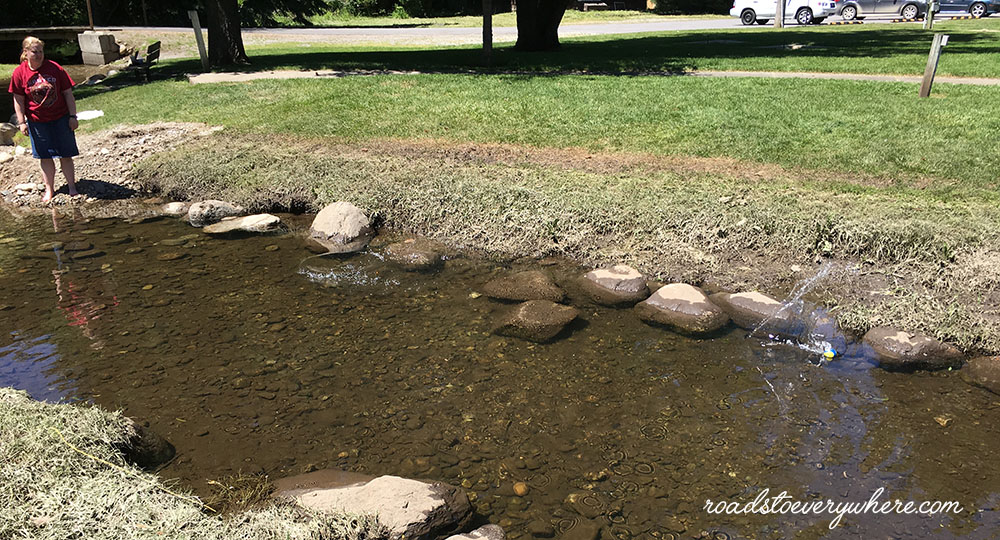 So off they went.

In a little bit they were back.

“It does skip on water!” they were excited to report. “So cool!”

(In the picture above you can see the ripples in the the center of the picture where the Surf ball hit the water first, and then the splash where it was coming down when the picture was snapped.)

Perfect for playing with in the river or lake.

The most unusual item in the kit is not actually a ball. 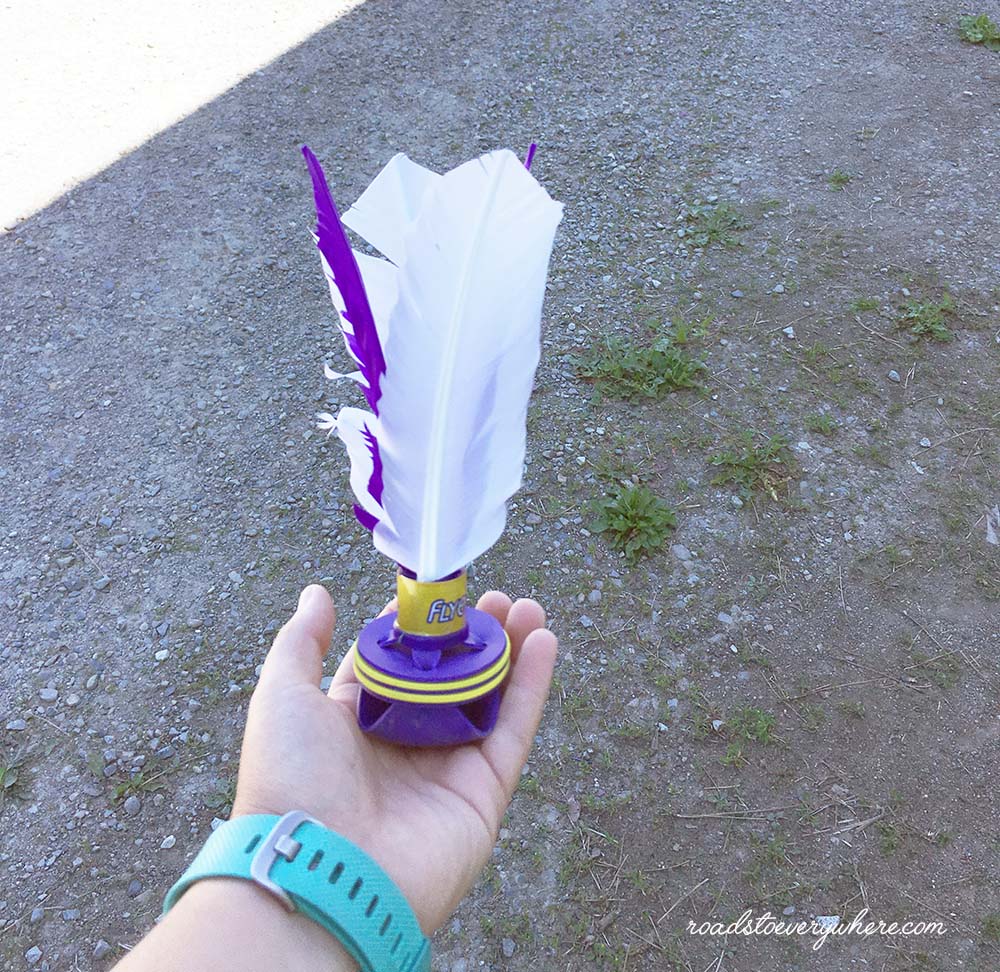 It’s called the Flyer. I guess it’s a little bit like a badminton birdie, but not really.

It has 3 large feathers which make it soar through the air.. It flips around when you toss it and lands weighted side down. 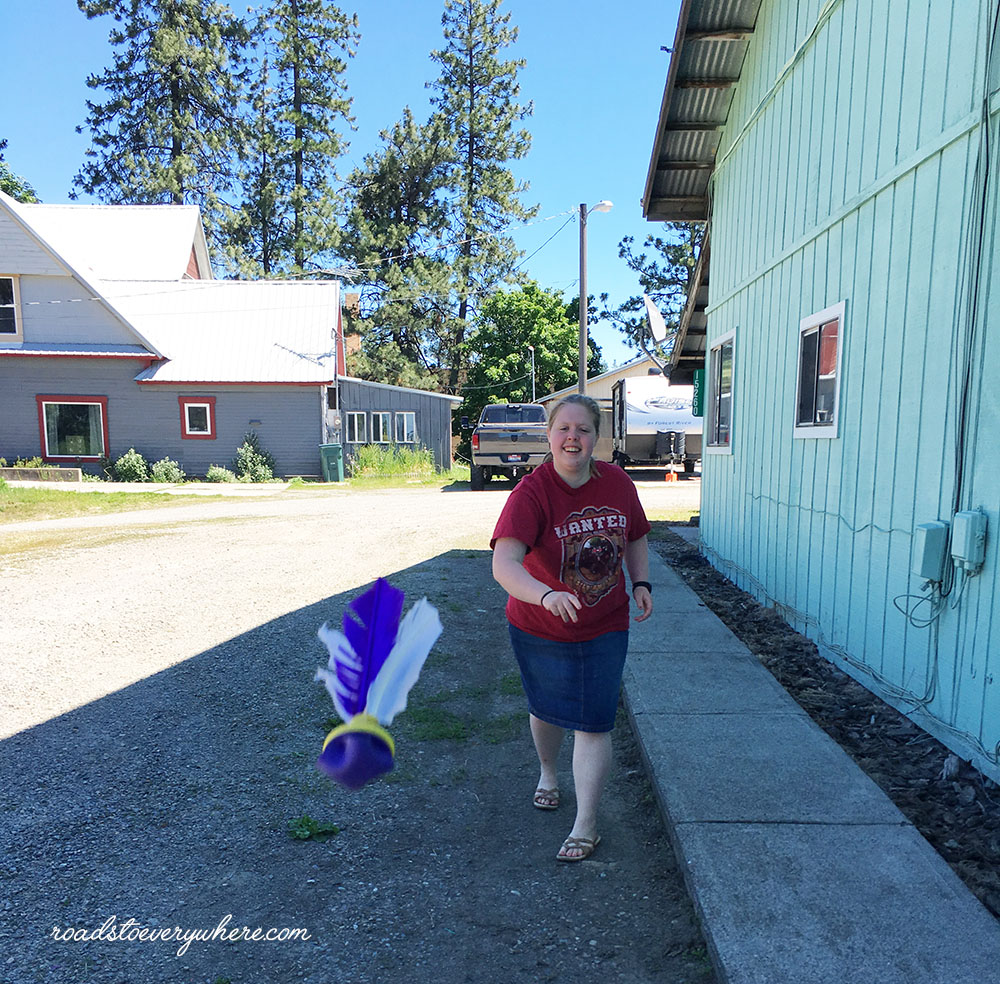 The girls tossed it back and forth. They tried swatting it with the palms of their hands and with paddles from another game we have.

Their conclusion was that hands were easier than paddles. However, after a few minutes of play with their bare hands they said their hands were stinging. Also, Rebecca said the ends of the feathers poked her a time or two, but she is more sensitive than most about things like that.

Would we recommend it?

Both girls declared the kit “so much fun!”

I asked them what ages they would recommend it for.

Rebecca said all ages on the Moon ball and Surf ball, but she didn’t think little kids would do very well with the Flyer.

Laura said, “I would play with all my adult friends, but I would also play with kids I was babysitting.”

If you’re looking for something a little different to encourage outdoor activity for any age my family definitely recommends the “Waboba 3-in-1 Active Play Kit” which encourages you to “play until the sun goes down!”