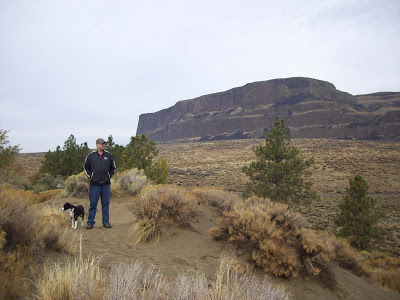 Remember how I mentioned that I wanted to get in more walking and hiking this summer? Well, in spite of my good intentions, I haven’t gotten out there as much as I thought I would. An overbooked schedule has a way of crowding out things like that. However, I will say, I have hiked more than usual this year– so I guess that’s better than just sitting, huh?

This past weekend we camped at Steamboat Rock State Park in central Washington. Number 1 on the itinerary was to “climb the rock.” The men and kids had done it once before several years ago, but I just wasn’t too sure I was up for the challenge. Casual walking and moderate hikes are not exactly hard-core training for rock climbing. Lyle was sure I could handle it, so I took a deep breath and set off with the group. 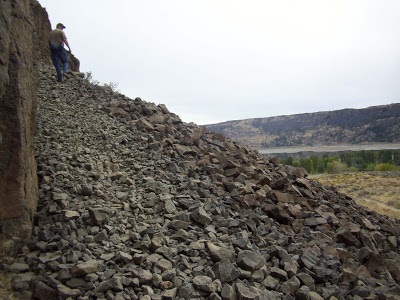 When we reached the face of the rock and saw that the trail looked like this ^ I balked. At least we weren’t shinnying up the rock hanging onto ropes (that, I couldn’t have done!), but slipping and sliding through the loose, sharp rocks seemed challenging enough. 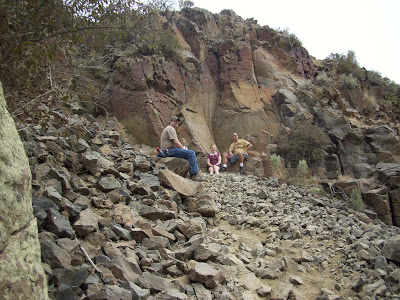 I took my time, and made it to the first resting spot. “Don’t worry,” they told me. “That was the hard part. Well, actually, this next little section is really the hardest part… and then, after that… well, we won’t say what’s after that.” I’m not sure how they thought that would be an encouragement to me, but I trudged valiantly upward and onward. 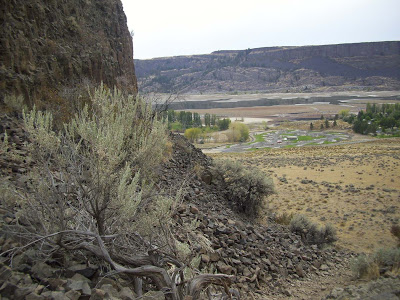 The landscape was so monotone and the sky was overcast, so it’s hard to see the elevation change in the pictures. Believe me, we were going up! I wanted to give up a couple times, and just rest on a convenient rock until the rest of the gang came back by on their way down, but they wouldn’t let me. “You can make it,” they kept telling me. 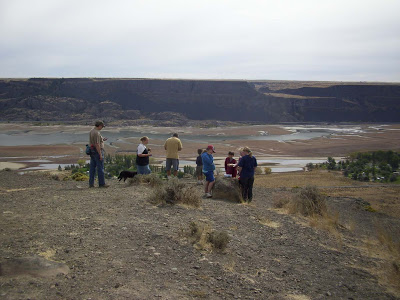 And, finally, I did. This picture was taken on the top of the rock, by me! Again, with the lighting and monochromatic scenery it’s a little hard to see the edge of the rock, but our group is standing pretty close to the edge. The green patches in the distance are the campgrounds (which are watered daily). 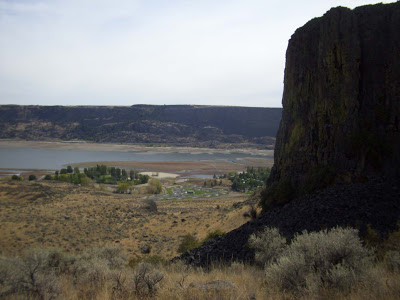 Naturally, going down was much easier than going up had been. But still, it was no walk in the park. Here’s a view of the rock as I came around the side of it going down. I’m glad I decided to attempt it. I will say, it’s not the best hiking trail I’ve ever been on, but it may well be the most challenging. Read: Not challenging at all for experienced hikers. Oh, well. It was an accomplishment for me.