Last fall I discovered a new magazine that I just love! Now, understand, I’m really not much of a magazine reader. Almost always I’d rather read a book. But the gentle picture on the cover of MaryJane’s Farm caught my eye on the magazine rack one evening when Lyle and I were enjoying a “coffee date” at Borders. I picked it up and thumbed through it, and decided to splurge and buy it right off the rack! MaryJane is all about simple, country living, and even though I’m not quite as “green” as she is, I thoroughly enjoyed the magazine.

I took the latest issue with me to Florida last month as “airplane reading”. Each issue has a theme, and this time the theme was “Simply Bee”… about beekeeping and honey. I was particularly interested in that, because my dad is in the process of taking up beekeeping again. He had bees most of my growing-up years and had just gotten back into it a couple years ago. That just happened to be the year that so many bees died. So he’s trying again this spring. We are hopeful that it will be a better year for bees.

I thought it was an interesting coincidence that the movie shown on the airplane on the longest leg of my return flight was The Secret Life of Bees!

But I’m getting way off track here… and this post is evolving into quite the meandering narrative!

What I started out to tell you about was the article in the “Simply Bee” issue about making sour dough bread. I had always wanted to learn to make bread, but got frustrated with practicing because yeast is rather expensive to just keep throwing out until I could get the hang of it, so I had pretty much given up on the idea. I have a bread machine that does a pretty good job for things like pizza dough and cinnamon rolls, but I haven’t been that impressed with the loaves of bread it makes.

Well, MaryJane explains how to start your “mother” for sour dough bread using only flour and water. Granted, she stresses that it’s very important to use organic flour and purified water, but the quantity called for was small enough that I decided I could afford to experiment with it! 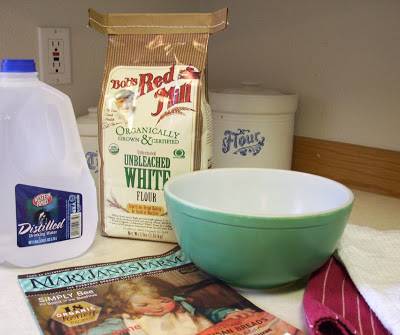 So last Monday I gathered my supplies and began with 2 cups of flour and 1 1/2 cups of water. Each morning I “fed” the “mother” 1/3 cup of flour and 1/4 cup of water. It was so interesting to watch the mixture come alive and begin to bubble and sour.

Yesterday was the day to take 2 cups of the starter out to make bread, and allow “mother” a day of rest! To make the bread I added 1 1/2 cups of flour to the starter along with a little honey and a little salt. That’s it! Four ingredients total: flour, water, salt, honey! 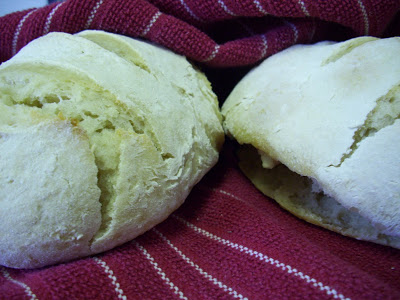 The bread turned out okay. It was a little heavier than I thought it should be. I think it’s possible that my “mother” needs to age a little more to make really good bread. Also, we’re having pretty cold weather right now, so it may be that I should have let it raise a little longer.

We did like the flavor! It has a very mild sour-dough taste, not the sharp/sour taste many commercial sour dough breads have. My older daughter doesn’t usually like sour dough bread, but she did like this. And since it is such a simple, inexpensive process I am going to keep playing with it!

Wanna try it? MaryJane was nice enough to post the article with the very detailed directions online! There is also a forum where you can discuss Bread the MaryJane Way! Check it out!