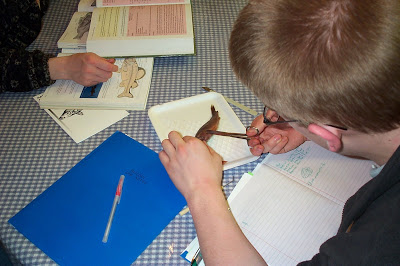 Did you ever wonder how high school homeschool students got their labs done? If you’re a homeschooler, you probably already know! In the kitchen, of course!

We started Biology in January, and invited a couple other families to join us once a week for the experiments. The first chapter in the book called for collecting pond water and cultivating who-knows-what to observe under the microscope. Back in January, we didn’t exactly have access to pond water, so we skipped ahead to the dissection part of the book. We have dissected an earthworm, a crayfish (which we all persisted in calling a “crawdad”), a perch (see picture below), and this week we’ll finish with the frog. It has been fascinating! The kids were hesitant at first. Just not too sure about cutting into dead animals. But as we’ve progressed they have found themselves interested in actually seeing what’s inside each creature, and have been willing to take turns doing the hands-on parts of the experiments. We plan to flip back to the beginning of the book and do the pond experiments next, now that the weather is warming up. That might turn out to be grosser than the dissections! At least the dissection specimens were preserved, and pretty rubbery.

Oh, and here’s a tip about high school sciences. My daughter is not strong in math, so I was not sure what other high school sciences she could do. Both Chemistry and Physics have a prerequisite of Algebra I. My daughter will be doing good to get through Pre-Algebra and Consumer Math by the time she graduates. I knew she would be okay with Biology, but I wasn’t sure where to go from there. I had an opportunity to talk to Dr. Jay Wile about it at a homeschool convention last summer. (The Apologia booth was just across the aisle from my Sonlight booth!) Obviou

sly, colleges will be looking for the Chemistry and/or Physics credits, but if that is not a concern, he recommended Astronomy and Advanced Biology, and then maybe even Marine Biology if we have time. I was surprised about Advanced Biology. I figured Chemistry would be a prerequisite for that, but he said no, the only prerequisite was Biology I. So we did one semester of Astronomy in the fall, and then started Biology. We’ll finish Biology this fall, and maybe do another semester of Astronomy in the spring of 2009, and then see where we stand.