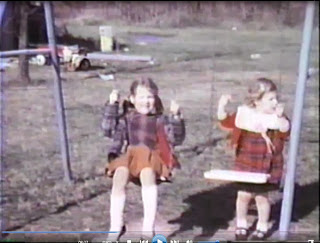 Among the “thou-shalt-not-touch” treasures tucked away in the secret storage places of my parents’ bedroom was a movie camera. I don’t remember where it came from. Perhaps my mother got it with S&H Green Stamps or something. What I do remember is that we had no projector for watching any home movies that had been filmed on it, so on the rare occasions we were able to borrow a projector, watching Our Movies was a Big Deal.

There was the reel of my parents’ wedding (taken, I’m sure, on someone else’s camera)… and the reel of me as a baby… and then a gap of about 5 years. The third reel starts when my youngest brother was a baby. Now that I think about it, that must have been about when we got our own movie camera, because there’s a good bit of footage that year, relatively speaking.

I was five that year, and utterly convinced that if the movie camera was recording, I should probably perform. That is to say, show off. The footage of my newborn brother has me turning somersaults in the background. 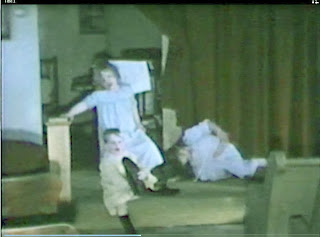 The footage of the five of us children playing on our swing set has me running around like a maniac, “checking” on the baby, picking up the ball, prancing here and there. It’s down-right embarrassing is what it is! 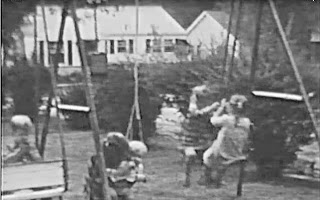 Fifteen or twenty years ago we had our old home movie reels transferred to VHS tape, and then later on to DVD. I was very surprised to discover that the full length production of the home movies from my childhood only amounted to about 20 minutes of footage total. That would be because, while we did have a camera, movie film was costly… and having the film developed was costlier still. Not only is the footage very brief, it is also very poor quality as a result of the film being left in the camera too long before developing.

(I know it makes me sound like an old woman to marvel at how far technology has come in my lifetime… but I can’t help it. It’s true.)

My parent’s 50th anniversary is coming up in a few months, so I’ve been working on a PowerPoint presentation for the occasion. I was looking for some pictures of a particular period of time and couldn’t find some that I thought we had. Then I remembered that it was actually footage on our old home movies. So I popped the DVD in the computer and attempted to capture some screen shots. That worked out okay except for the poor quality of the original, but there’s not much I can do about that at this point.

The funny thing was, though, I found myself deleting the stills of me showing off. “Silly little girl!” I thought. “I’ll teach her a lesson. If she’s going to show off like that, she can’t be in my PowerPoint!” And then I literally laughed out loud at myself. Not only was the “silly little girl” me… that was more than 40 years ago!

Yeah. Turns out I didn’t grow up to be a movie star.