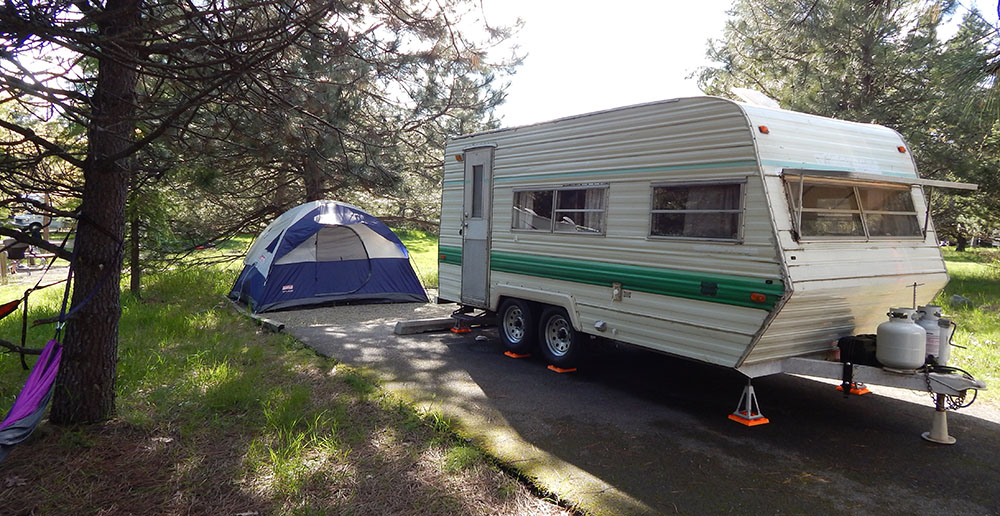 It was not an auspicious beginning.

For several weeks we (and by “we” I mean mostly Lyle) had been working on our vintage trailer. We de-winterized it and cleaned it. Lyle repaired the roof in a couple of places. And then he took on the project of replacing the wheels and tires. Finally, we decided it was ready to take out.

We chose to go to our closest state park for this first outing. Turns out, it’s a good thing we did.

Before we were even out of the driveway Lyle realized that the trailer brakes weren’t working. Since it was a short trip, he decided to just take it easy and go on. So that’s what we did. 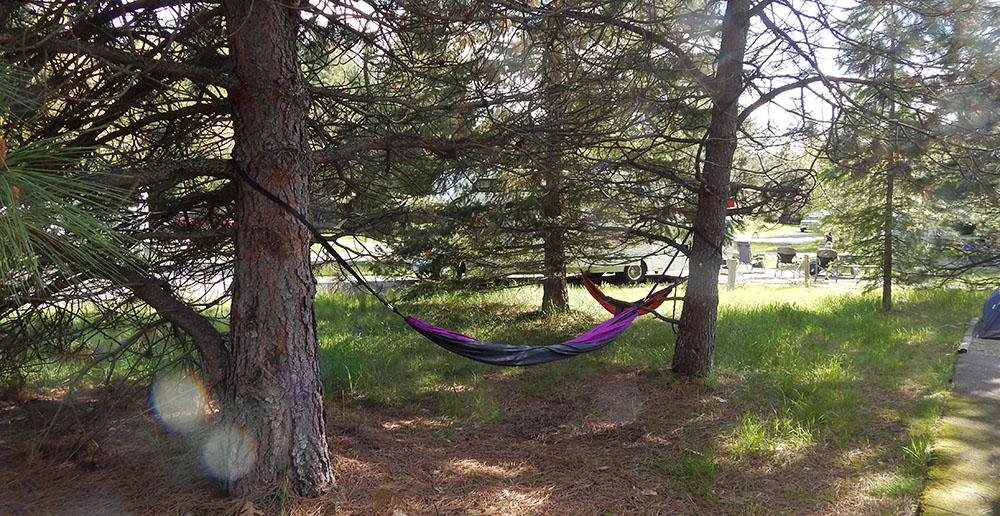 Friday evening was lovely as we set up camp and roasted hot dogs over the fire. The girls set up their tent. They hung their new “Christmas” hammocks from nearby trees.

And Lyle brooded about the brakes.

He was afraid he was going to have to take the wheels back off to find the problem.

“I didn’t even bring my electrical tool box,” he said. 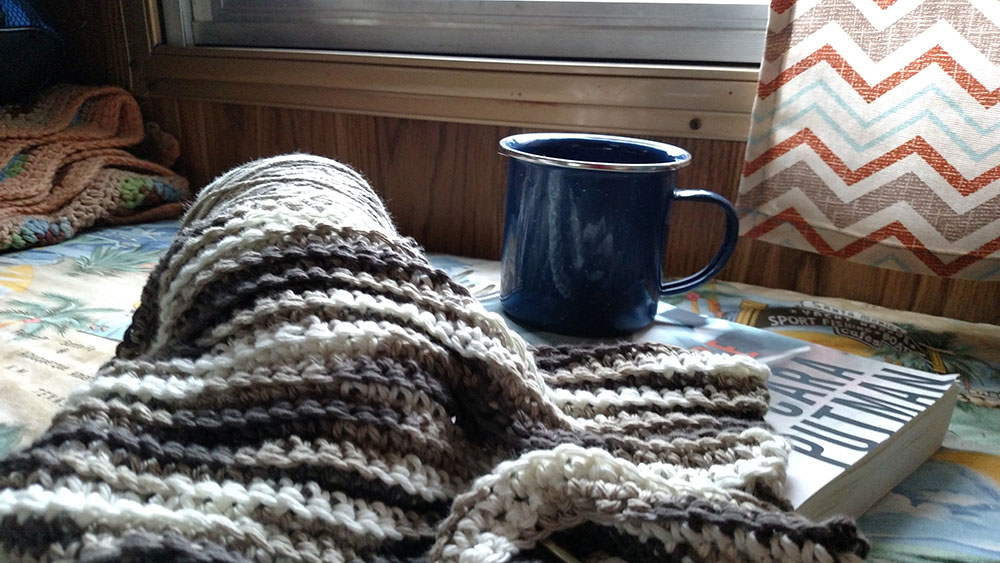 Saturday morning dawned gray and damp. Lyle built a fire and started cooking bacon and eggs. By the time breakfast was ready to eat, the rain had arrived. We huddled at the picnic table under the awning to eat. Then we all headed inside where it was warmer and dry.

The girls decided to hang out in their tent. Lyle and I enjoyed a cozy morning of reading, crocheting (me, not Lyle), drinking coffee, and listening to the rain on the roof.

And Lyle brooded about the brakes.

Okay, he wasn’t quite as despondent as it appears. He was actually reading a magazine at the table. But I could tell the brake issue was bothering him.

“We could easily go home and get your electrical toolbox,” I reminded him. After all, we were only about 20 miles from home.

So that’s what we did.

By the time we got back, the rain had stopped and the sun had come out. Lyle immediately crawled under the trailer to see what he could discover about the brakes.

A few minutes later he came in and announced, “They’re working now!”

“It was just a bad connection,” he told me. “I scraped it with my screwdriver and that fixed the problem.” 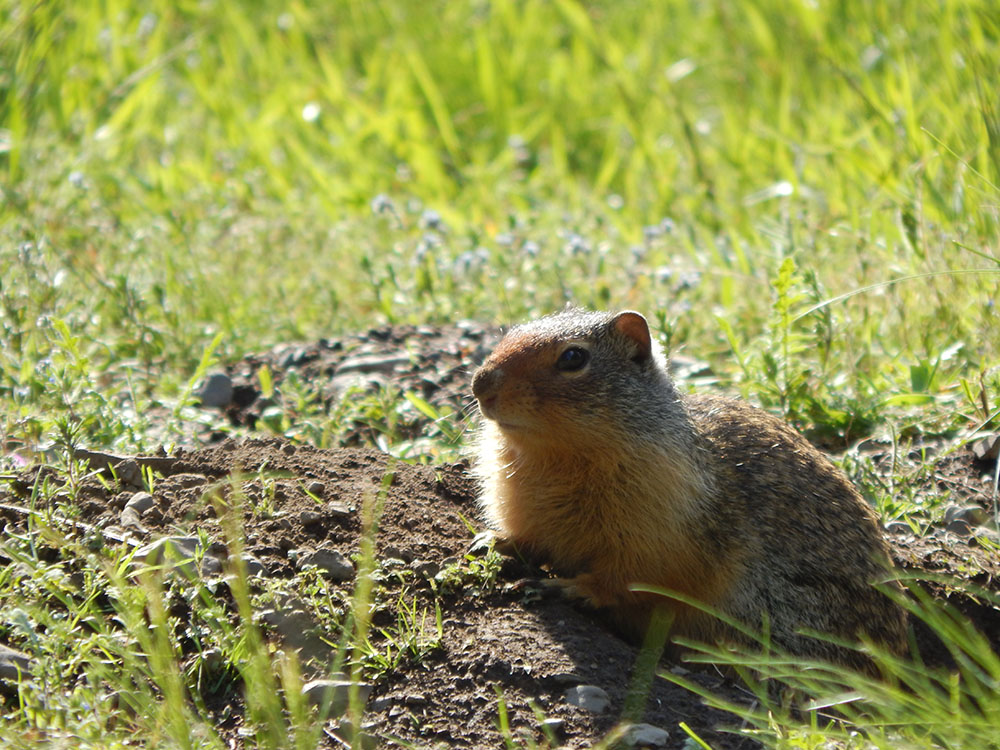 That definitely made the rest of the camping trip more enjoyable.

We watched the “prairie dogs” (ground squirrels) in the nearby field. Cookie, especially, was on the alert. These little guys are only about half the size of real prairie dogs, but as Head of Camp Security, Cookie just wanted to be sure they didn’t try anything nefarious.

As we were sitting around the fire later, we had a discussion about whether it was worth it to try to keep making repairs to this cute little vintage trailer. I like it, but I’m not the one who has to keep working on it. So we may decide to sell it and get something a little newer. We’ll see.

We’ve had a variety of different set-ups for camping over the years. It occurred to me that I could share some of my camping lists, tips, and campfire recipes with you. So I plan to do that this summer.

And I’ll keep you posted as to what we decide to do about the trailer.