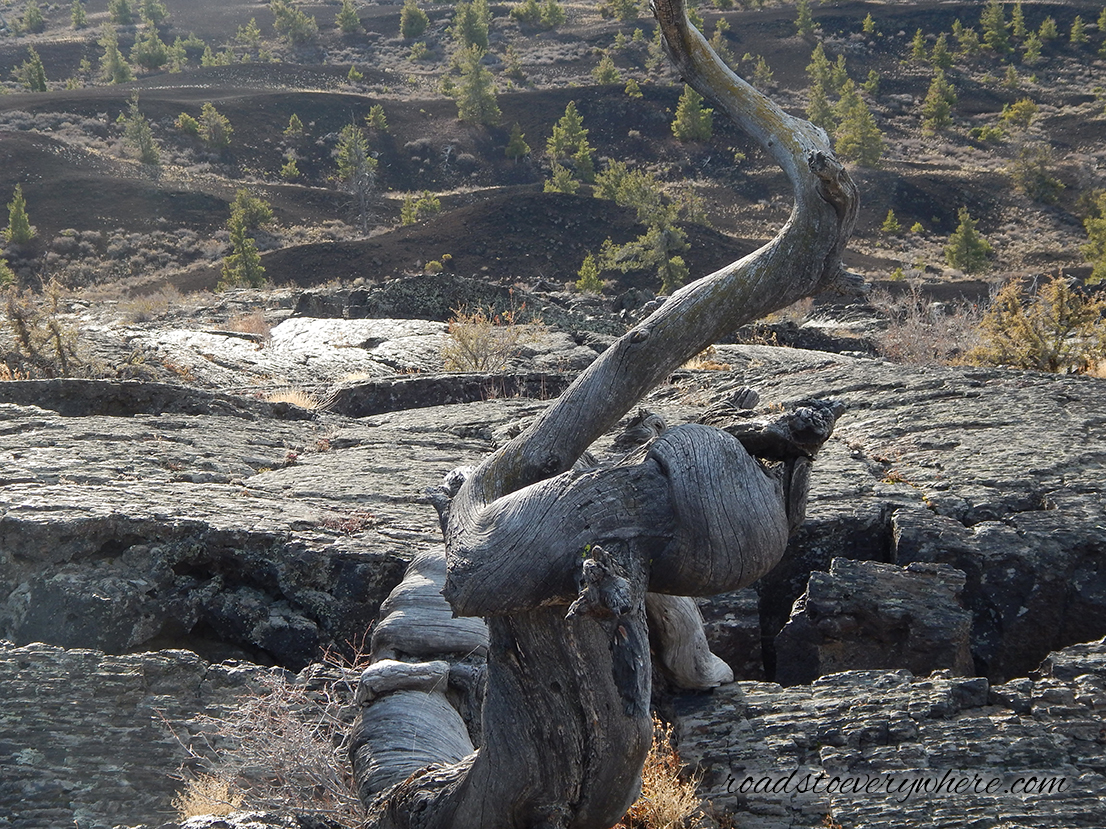 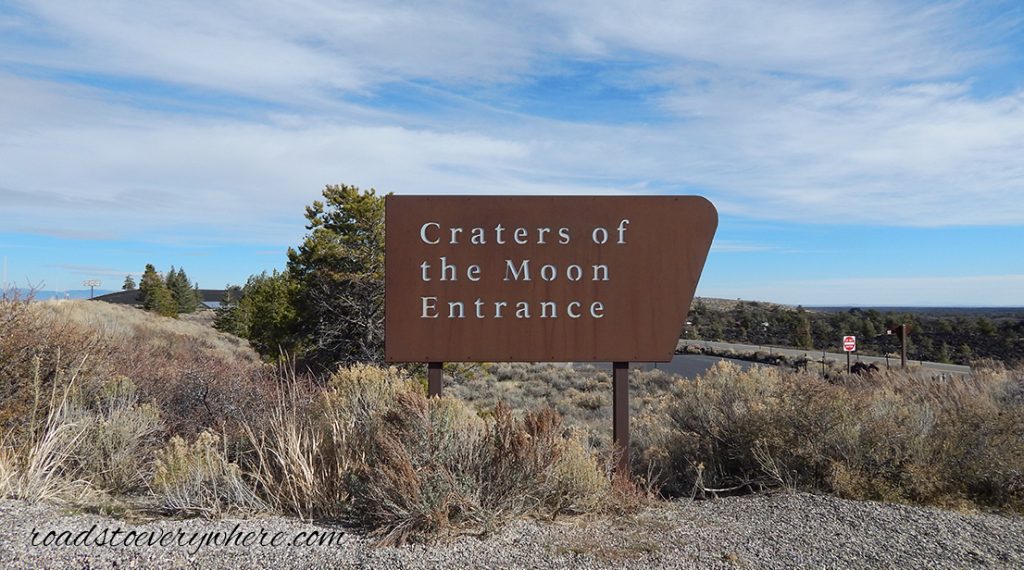 For our anniversary trip this year we decided to visit Craters of the Moon National Monument in southeast Idaho. We took a 3-day weekend for the trip. We stayed in Idaho Falls.

Craters of the Moon actually has nothing to do with the moon, except that somebody in the 1920s thought it looked like the surface of the moon as seen through a telescope. The terrain is formed from volcanic activity. It’s very unusual and impressive, but unless you’re into geology (which I’m not) it’s probably not worth going out of your way to see. 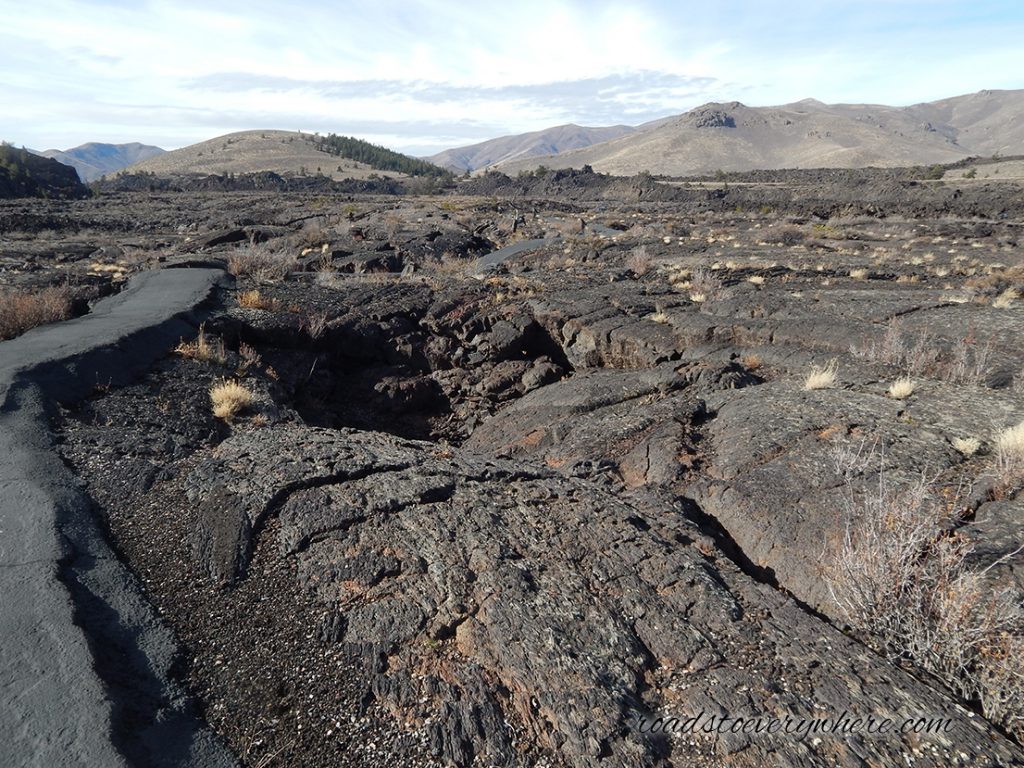 Our plan was to drive through the park and stop at different places to do some of the short hikes. However, I hadn’t actually thought that plan through very well, as I did not have proper shoes for hiking.

In case you ever wondered if clogs would work as hiking shoes, the answer is: not very well. Ask me how I know.

The first trail we stopped at was 0.3 miles long and paved. Easy-peasy. Proper shoes? Eh. No worries.

Except. The path was narrow and the asphalt paving was uneven. 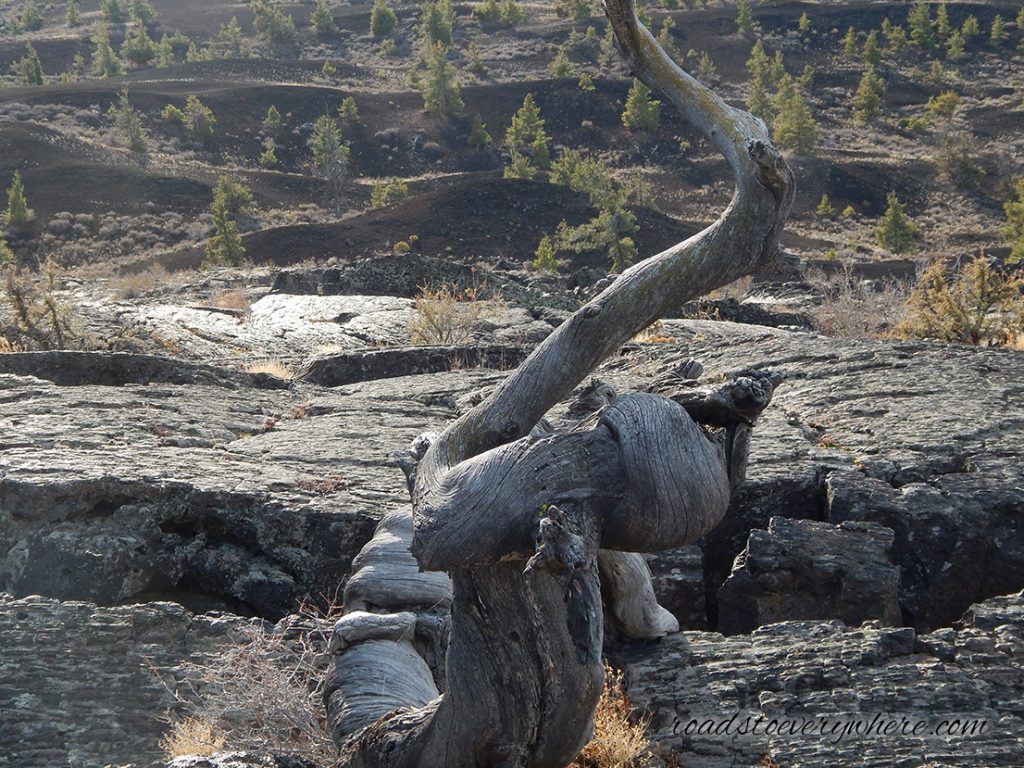 In my zeal to take some cool pictures to show you… Isn’t this old twisted tree interesting? And yes, it really did grow that way. It’s dead now, but they had a picture of it when it was still growing. 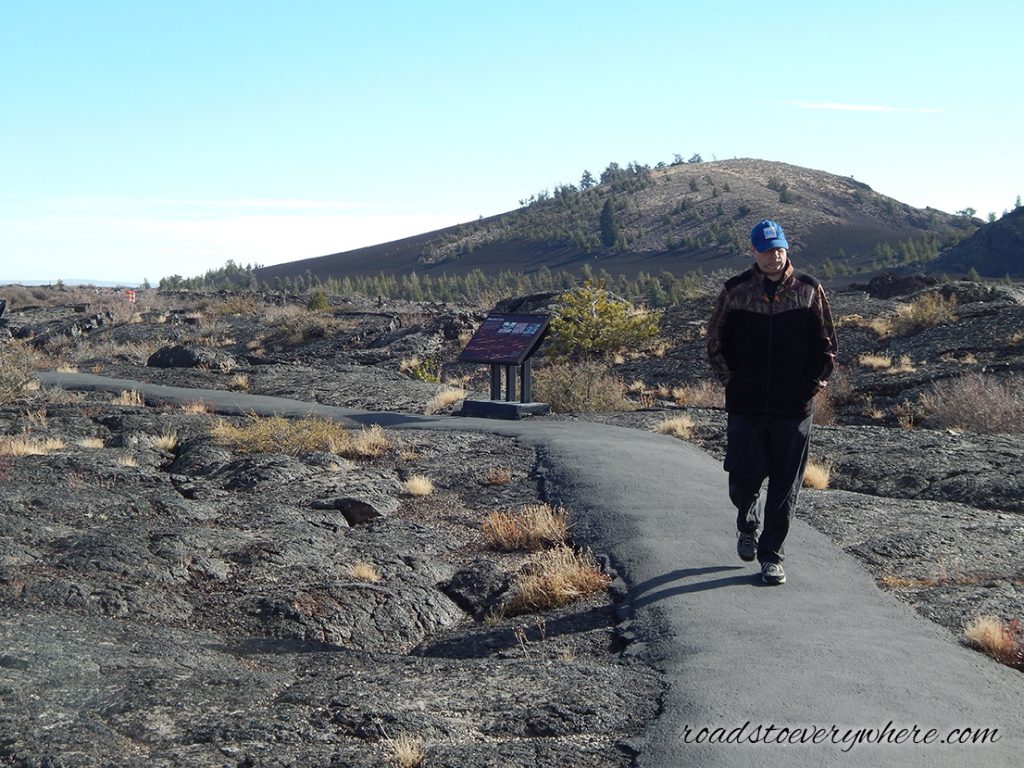 As I was saying… I was too busy taking pictures to watch where I was going, and if my foreshadowing hasn’t been too subtle, I bet you already figured out that I stepped in the wrong place and twisted my ankle and took a tumble. Fortunately, it wasn’t a hard fall. I landed on my hands and knees. After I caught my breath Lyle helped me up and I gingerly tried walking.

Whew! I was fine–just a little sore. I was glad no one else was around to witness such stupidity.

I carefully made my way back to the car and decided I should probably be done hiking for the day. So we visited the rest of the park by car.

I noticed these little white splotches in certain areas and wondered if they were plants of some kind. 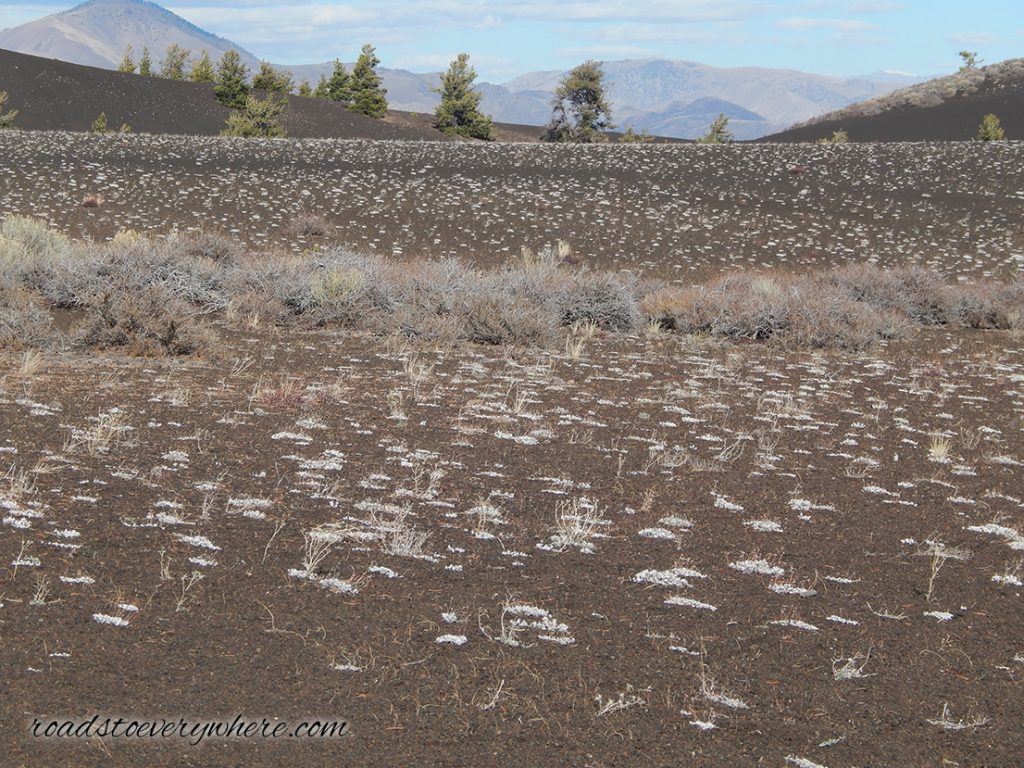 We soon came to a helpful interpretive sign and found out that the answer to my question is: yes. They are dwarf buckwheat. 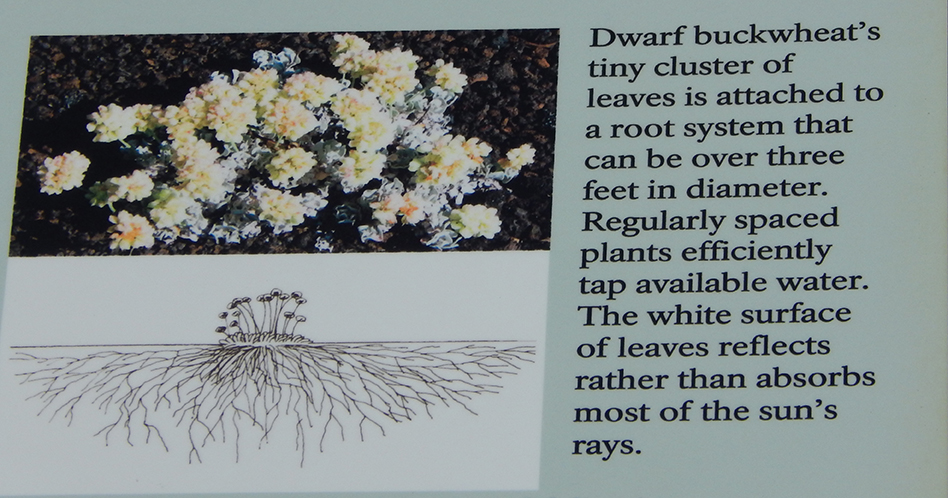 One story that particularly fascinated us was how some of the pioneers on the Oregon Trail actually chose to cross Idaho in this area as they were trying to avoid Indian ambushes further south. Can you imagine trying to cross rocks like this in a wagon? 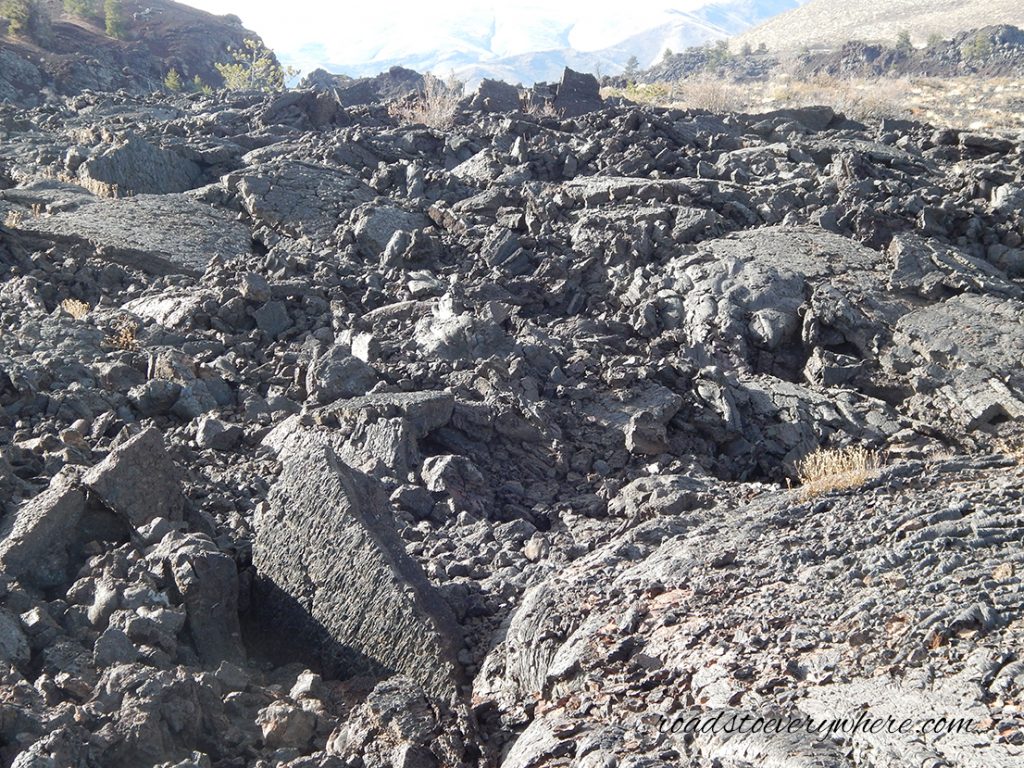 Presumably there were trails that skirted the lava fields, but still. Can you even imagine that? 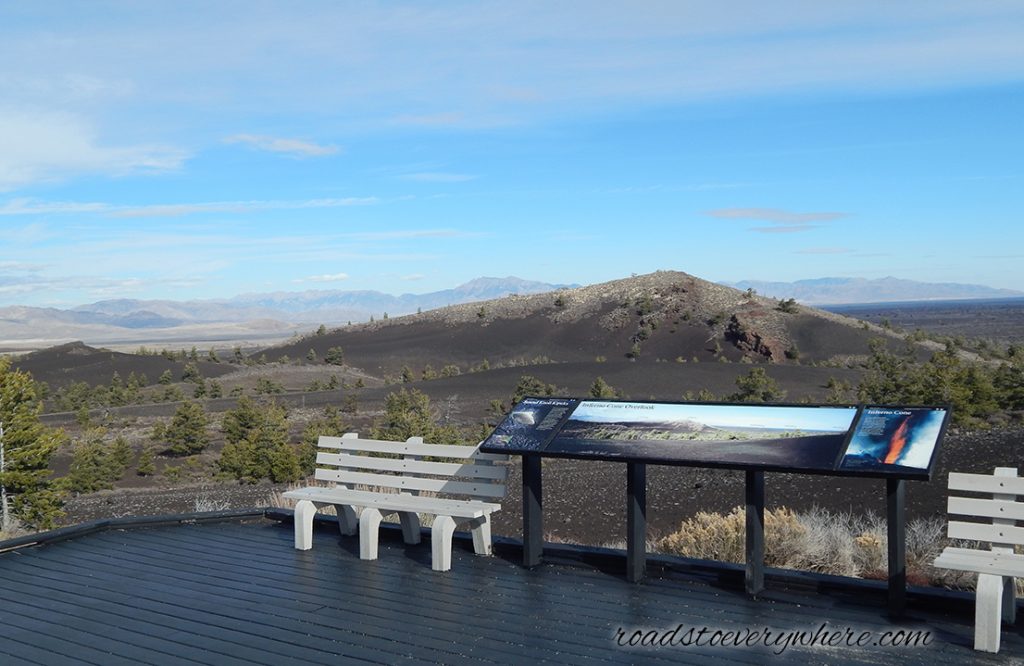 The hills throughout the area are volcanic cones. Geologists think the volcanic activity in the area happened about 2,000 years ago.

I would have liked to visit some of the caves in the area, but we decided not to take the time for that. Besides, wrong shoes.

The moral to the story is: If you ever decide to visit Craters of the Moon, wear lace-up shoes.

Epilogue: Both my ankles were pretty sore later in the day and kept me awake some that night. But now, 2 days later, they’re fine. I do appreciate your concern.