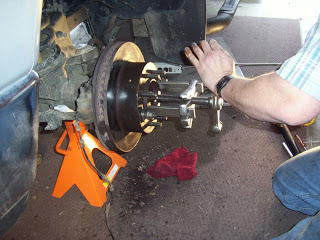 This is the story of the job that consumed our entire holiday weekend.

One day last week Lyle noticed something wonky going on with the steering of his truck. After further research he determined that it was time to do some front-end work before we set off on our trips in June. Memorial Day weekend was supposed to be cool and rainy anyway (not good camping weather), so that seemed the ideal time to get this “little job” taken care. Actually, he knew this wasn’t going to be a little job, but if we had known at the out-set that his unseen partner was going to be Murphy… you know, of Murphy’s Law?… I think we would have been highly tempted to just take the truck to the nearest dealer and trade it in!

Lyle is a skilled mechanic but it is not what he does for a living so he doesn’t have a full range of auto-shop tools at his fingertips. He made a list of the parts and tools he thought he would need for the job and diligently went on “hunting and gathering” trips to the various “man stores” in the evenings last week. He knew it was likely to be an all-day job, and he didn’t want to have to waste time on Saturday running after parts. His plan was to get it done on Saturday, and then be able to relax the rest of the weekend.

I know very little about auto mechanics myself, so I can’t describe to you the work that needed to be done and the problems he ran into. 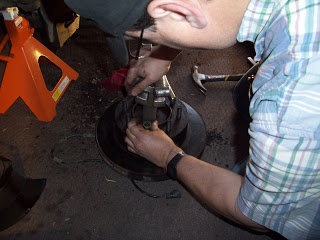 However, every step along the way it seemed he needed another tool he didn’t have. You see, a 1-ton truck has really BIG parts… and after 100,000+ miles they don’t want to come apart! 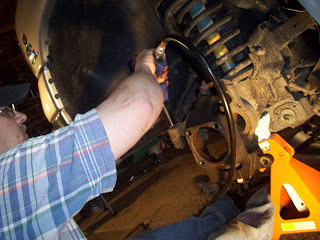 I tried to be the “gopher girl” but it got to the point where he didn’t know what to tell me to get… so in spite of his best planning, he spent 2 1/2 hours driving all over Spokane looking for tools. Tools that ended up not working, or breaking… 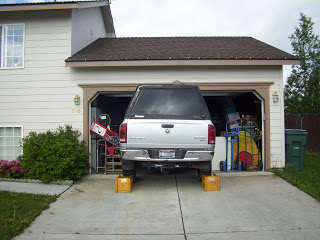 By 8:30pm on Saturday it was obvious that there was no way he could finish the job that day. But the truck was up on jacks with a wheel off and it was sticking half out of the garage. We were concerned that someone might just stroll into the garage during the night and take who-knows-what. We live in a pretty safe neighborhood so that scenario was not likely, but still, we didn’t like to leave the garage open all night. Lyle thought maybe he could just sleep on a cot in the garage that night. I had a “better” idea! I built a “security gate” of whatever rattly clutter I found laying around the garage… a couple of dollies, a folding table, a rack, a couple of brooms and rakes… and then I bungie-corded it all together on either side of the truck. Yes, I know, any half-wit could move the stuff and get in, but they would make an awful lot of racket doing it and it would wake us up. We laughed at our high security measures, but it did make us feel better! 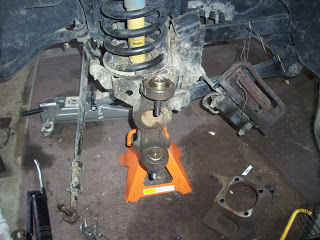 On Sunday Lyle rounded up a couple more tools, but mostly he observed a day of rest. Early Monday morning he was back at. This u-joint was the main “problem child”… no amount of penetrating oil, banging, or pressure from the hydraulic press would loosen the parts. 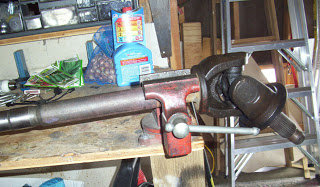 Finally, Lyle took a grinder to it, to separate the part he was replacing. Having it in pieces made it easier to bang it apart, but it still took all the strength of the hydraulic press and several mighty blows of the hammer. 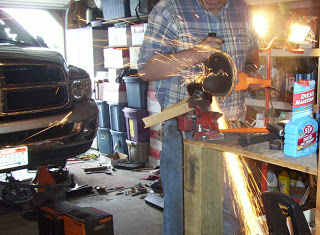 We were so relieved to finally begin to make progress… and by 9:00p.m. last night the truck was back together and running smoothly. We took down our “security gate” and thanked God for His help in getting us back on the road!