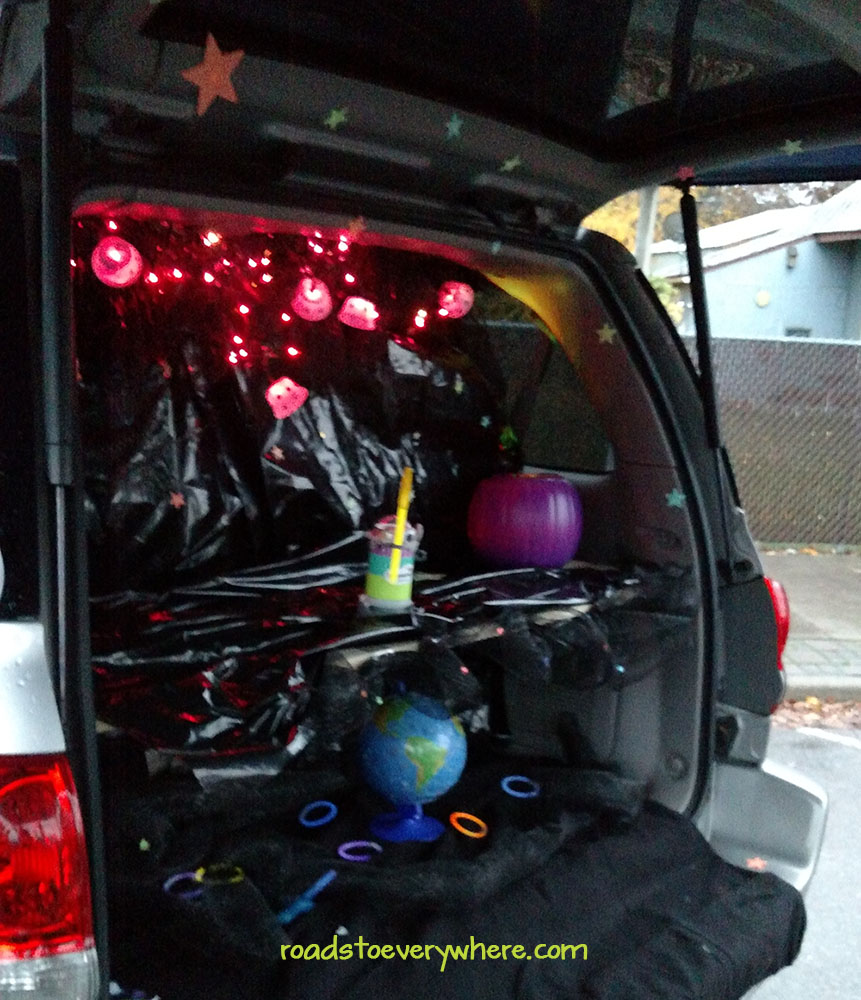 One of my responsibilities as office manager of the Rathdrum branch of Progressive Printing is to be involved in community events. When the Parks and Rec department announced that they were planning a family-friendly trunk-or-treat on Main Street, I decided that we could print up some coloring books to give out along with candy to advertise the print shop. We came up with an outer space theme for our trunk, and I designed a coloring/activity book to go along with that.

The time was set for Saturday evening from 5:30 to 7:30. The space allotted was 2 blocks long with cars parked along both sides. This is the first year they’ve done this here so they didn’t know how many people to expect. I figured 200 books would be plenty for an event 2 hours long. 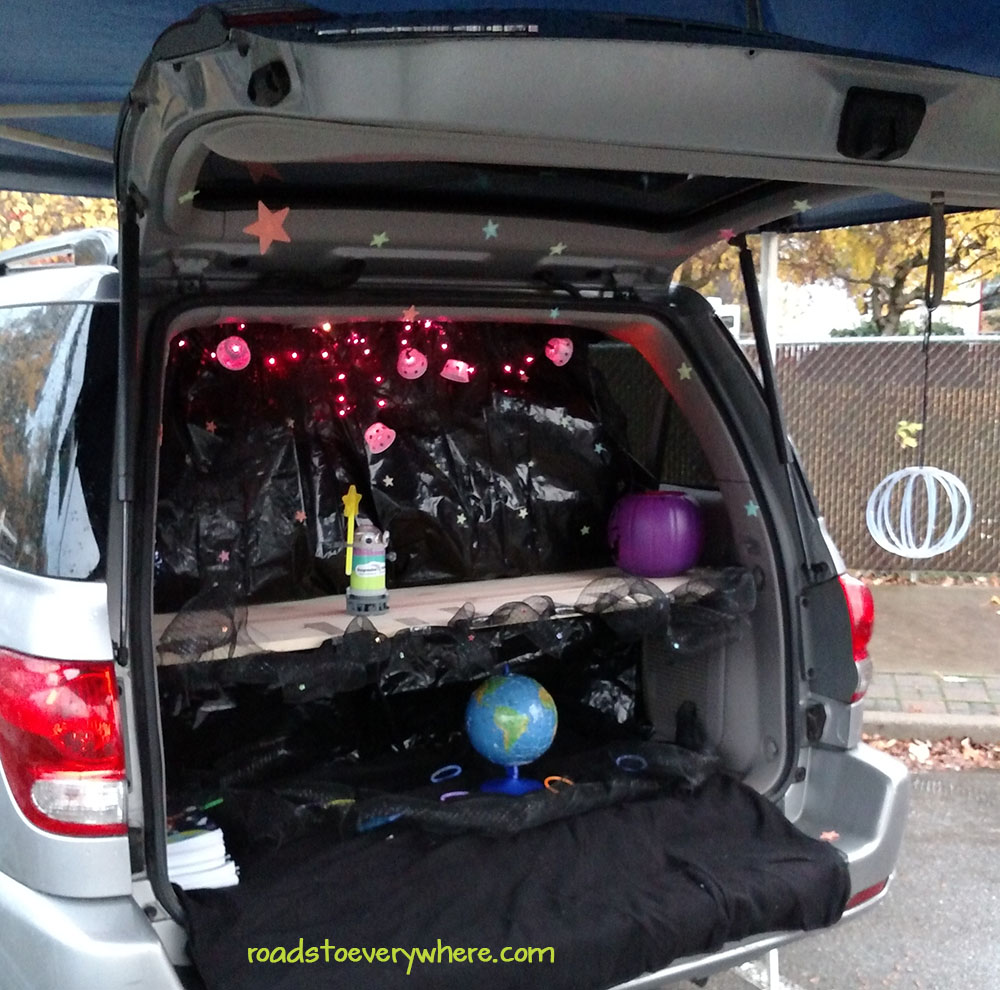 It was pouring down rain as we set up, but we knew that wouldn’t deter many. We set up an awning over our trunk so we could at least stay dry, even if the trick-or-treaters were willing to get wet. Fortunately for them, it stopped raining by the time it was supposed to start.

We draped the back of the SUV with black trash bags and stuck glow-in-the-dark stars all around. I created “flying saucers” out of nut cups to fasten onto a string of purple lights. We used black netting to add some texture. And then we hung stars and glow-stick lanterns from the hatch and awning. The little robot was supposed to roll around on the board holding his star wand. Theoretically, he is an edge-detecting robot so the idea was that he would back up or turn around when he got to the edge. I don’t know if the board wasn’t level enough or what, but that idea didn’t work out too well. He kept falling off the edge. 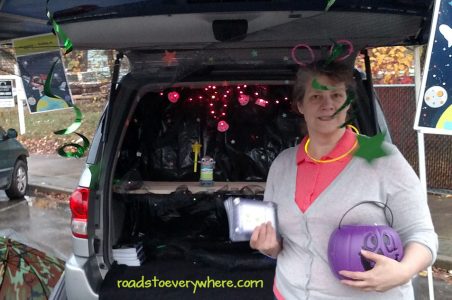 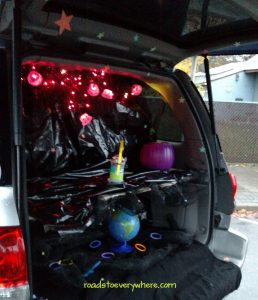 Since we couldn’t leave him turned on buzzing around on the shelf, we decided to go ahead and cover the shelf with black, too, and just set him there holding his wand. It wasn’t as dramatic, but once it got dark it was more about the strobe lights and glow sticks anyway.

I didn’t have a costume, but one of the packages of glow stick novelties that I bought included a headband with glow-stick “ears” so I stuck that on. (This is a ridiculous picture of me with the star dangly twirling in front of my face, but it’s the only one we got of me or the little books.)

One little kid asked me what I was supposed to be. A very good question!

Later another kid decided I was probably a rabbit. I’m not sure what either one has to do with space. Maybe if I’d’ve left one end of the glow sticks sticking out I could have passed for a space alien? Ha. 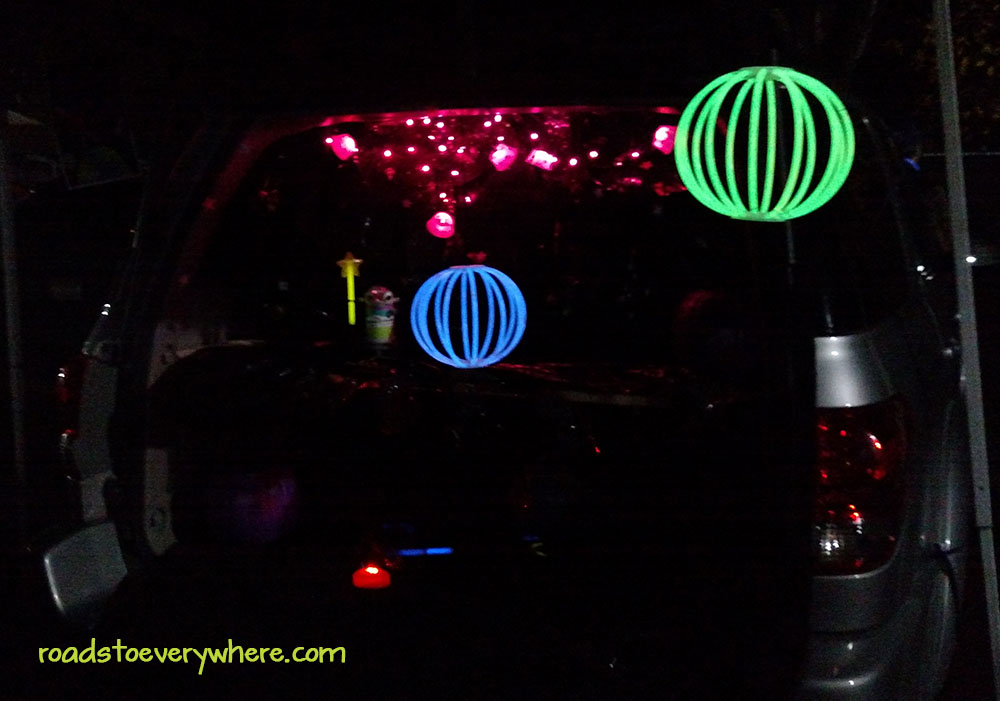 As simple as our display was, we got lots of positive comments after dark. We had a couple of small strobe lights that actually made the little flying saucers look like they were spinning. That was an accidental effect that I hadn’t planned on. Several people asked where we got the glow-stick lanterns. (Answer: Wal-Mart in the party section.)

I think families with small children appreciated that it was dark and dramatic without being the least bit ugly or scary. That’s what I was going for.

Oh, and the 200 coloring books? Yeah, I went through those in 25 minutes! I think I could have come close to giving out 1,000! The turnout was fantastic. We ran out of candy, too, about halfway through and had to send out for more.

I had hoped to have time to walk down the street to see other trunk displays. Silly me. Obviously, I didn’t get to do that.

Other festivities included carnival games and a pumpkin-carving contest. The girls entered that… and got 1st place!

They each entered a pumpkin– Laura’s was Tinkerbell (on the end) and Rebecca’s was the fox (next to it). The 1st prize label was on Rebecca’s pumpkin, but they called Laura’s name, so we aren’t entirely certain which one won the prize… so the girls decided to share it! It was a cute little trophy and a $25 gift card to a local mini-golf place.

My favorite part of the evening was seeing some of the creative costumes… and meeting my neighbors. All-in-all, we felt like it was a successful community event.