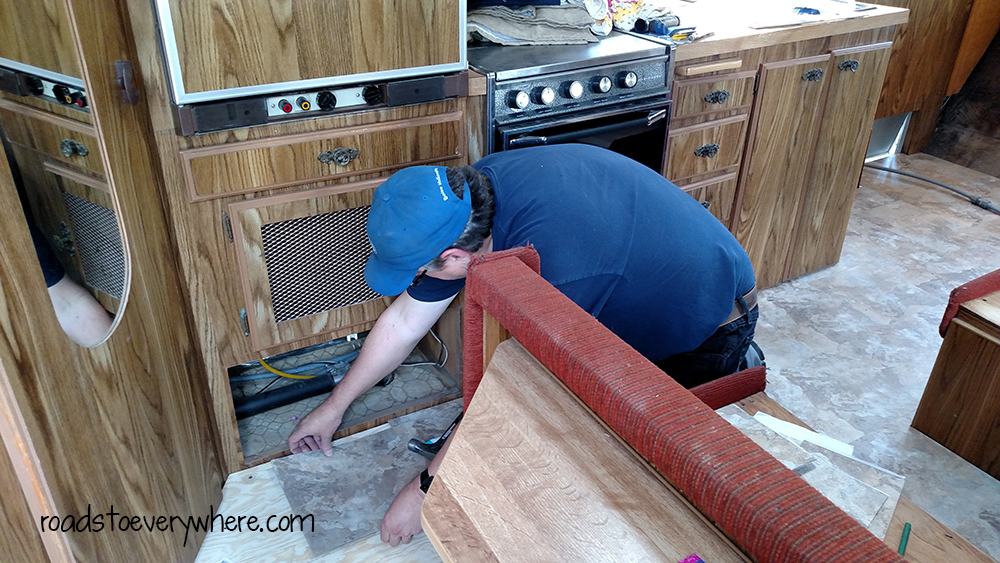 We’ve made a lot of progress on our vintage trailer makeover this past week. We still have a lot to do, so I don’t have a cutesy “reveal” photo yet, but I wanted to show you all the hard work Lyle has been doing. 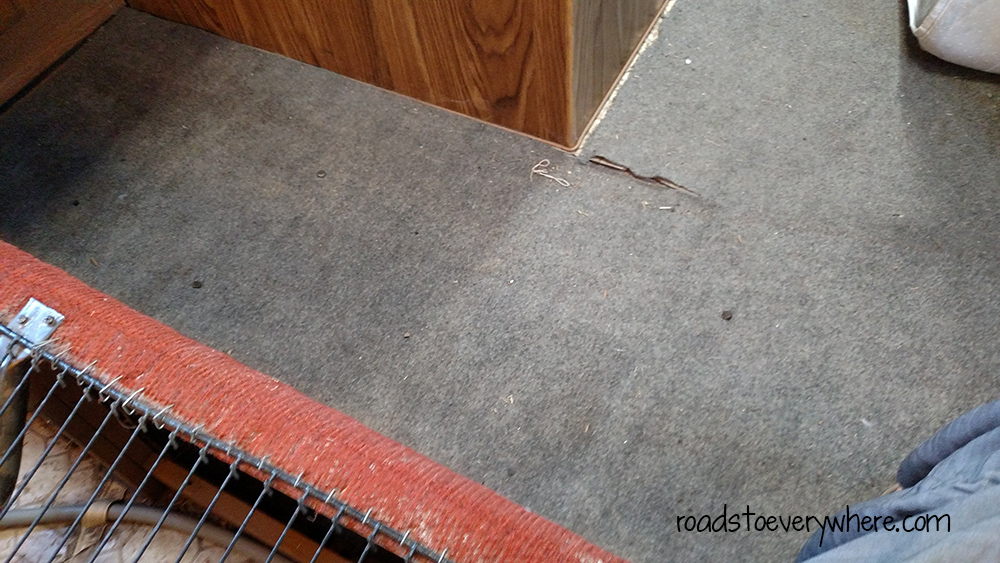 Our first project was to fix the floor. You can’t tell from the picture, but much of the trailer floor was squishy. In some places it felt like it might break through with any step. It had previously been patched and then covered over with ugly gray indoor/outdoor carpet. We decided we would not tear out the old floor, because we didn’t want to tackle the project of replacing joists. Lyle says that’s really what it needs to “do it right.” However, we felt that was beyond the scope of our abilities, so we decided on a patch job instead. 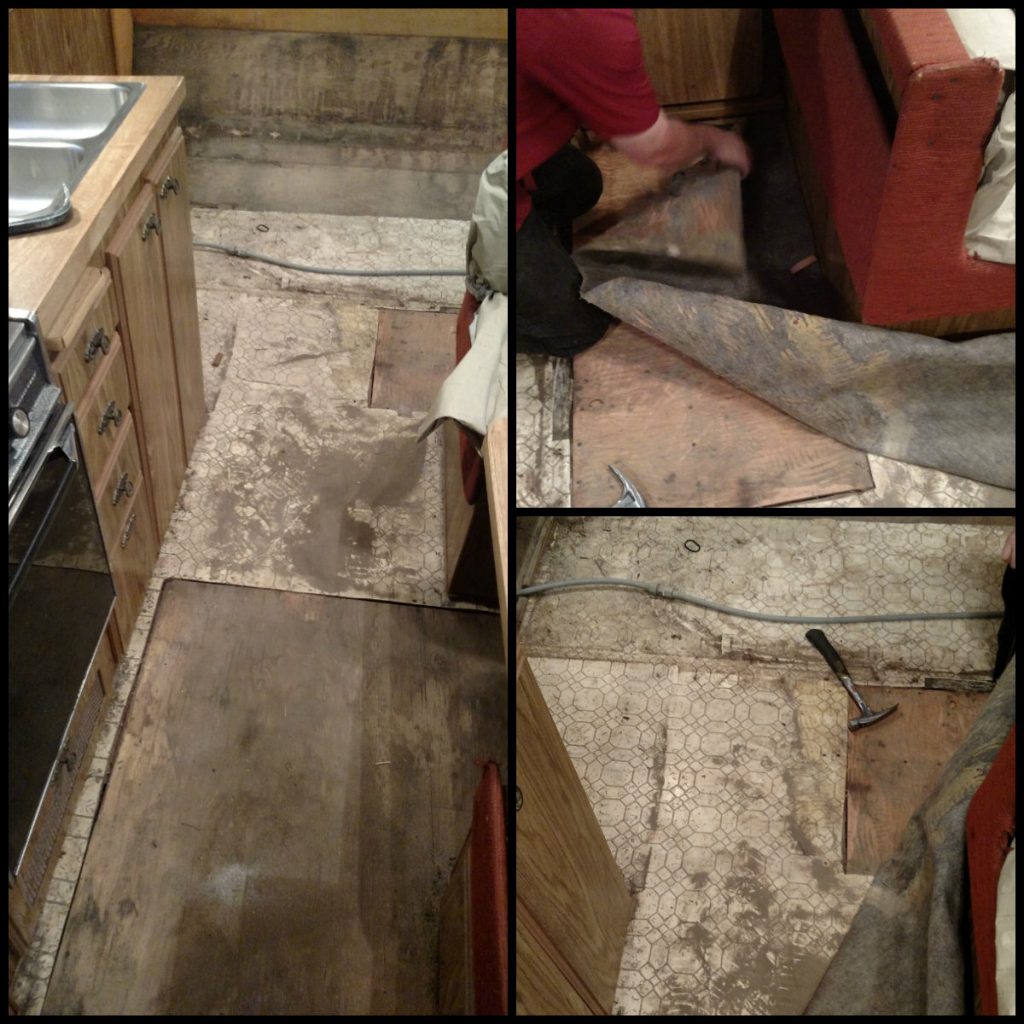 Lyle pulled up the old carpet, which was glued down in places and tacked in others. It was holding in a lot of dirt. 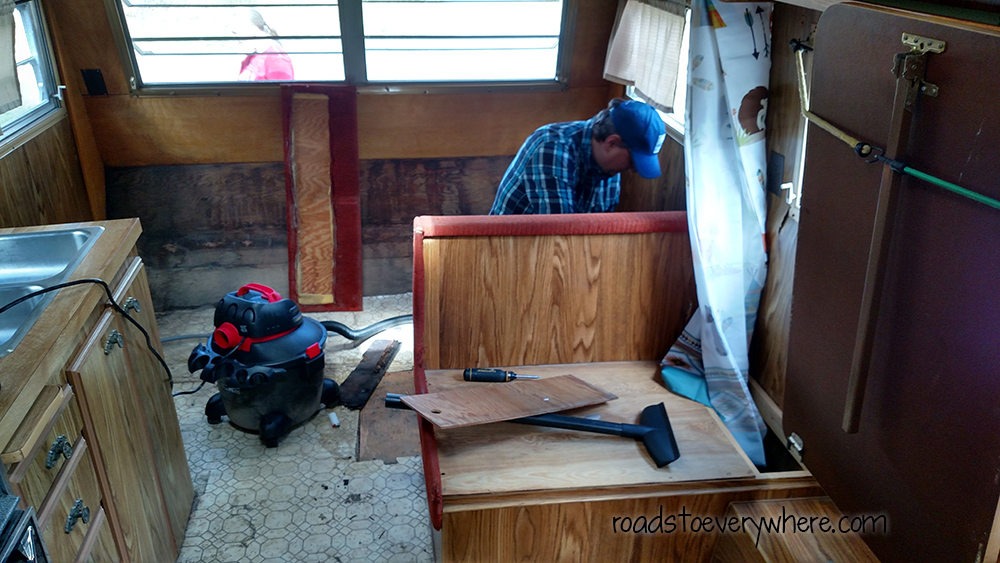 I had vacuumed the carpet, of course, when I cleaned the trailer but after the carpet came up, Lyle went over it again with a shop vac. He said that was a much better method than sweeping because it kept the dust down. 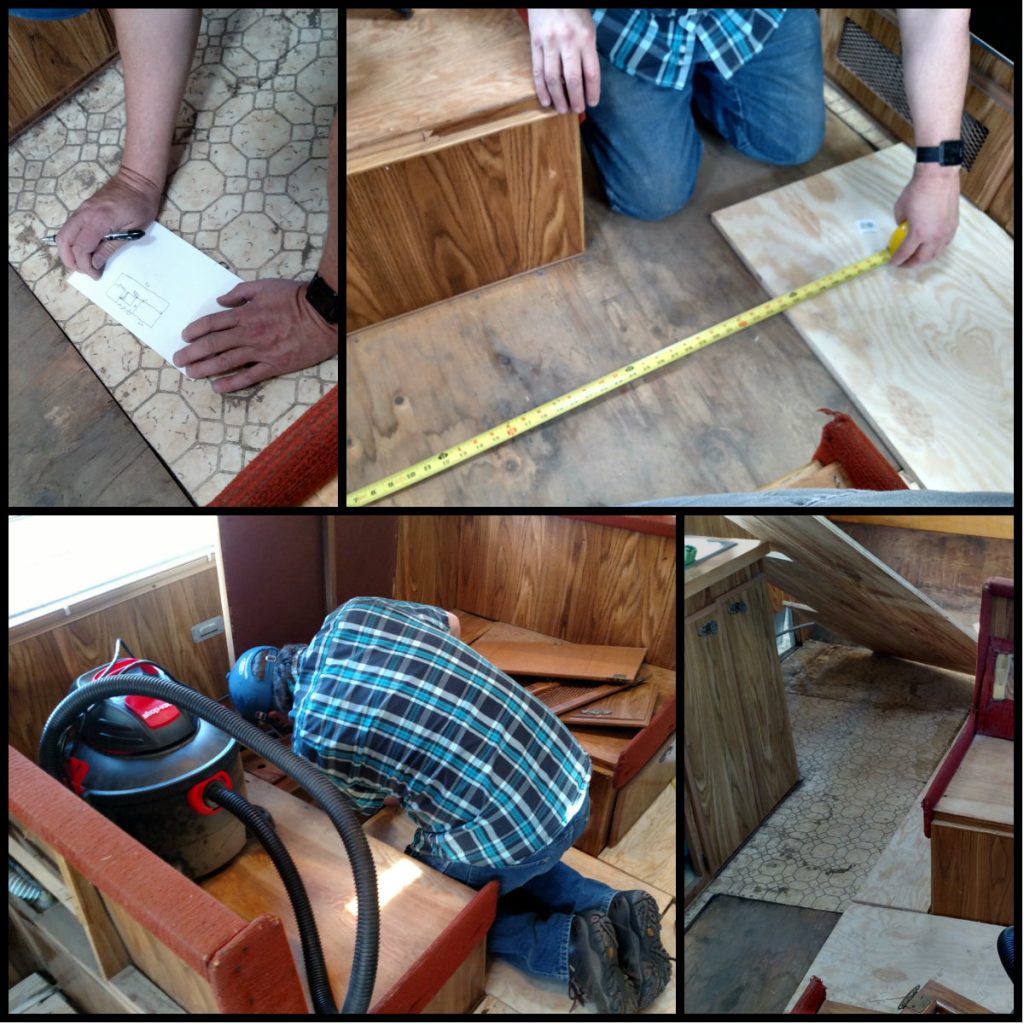 Our plan was to cover the floor with three-quarter-inch plywood in as big of pieces as possible to strengthen what was there. That part of the job involved a lot of measuring and sawing. I was the official board holder for the sawing part. I also helped carry the boards. My specialty is not carpentry, but I can hold things. 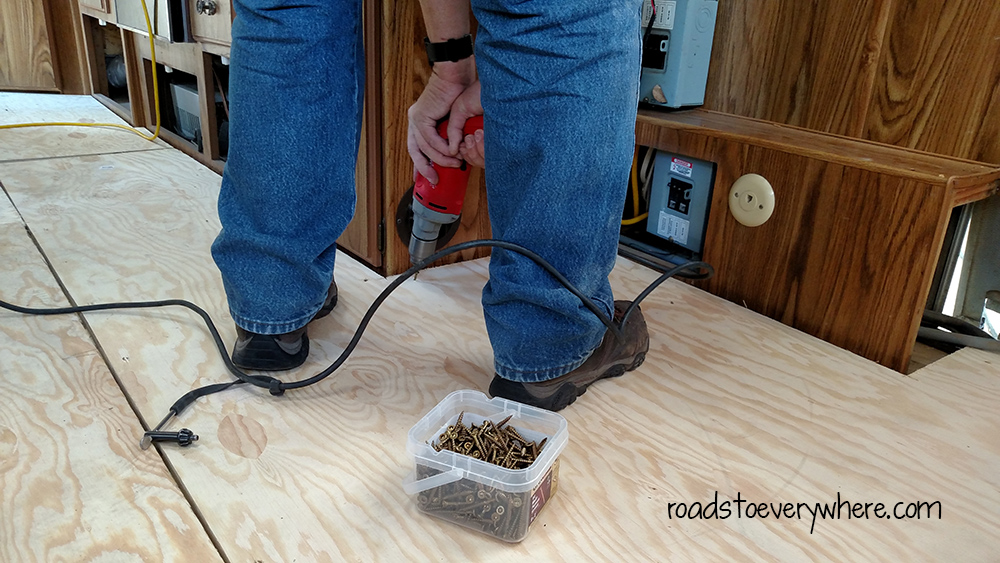 Lyle screwed all the plywood down as tightly as possible. 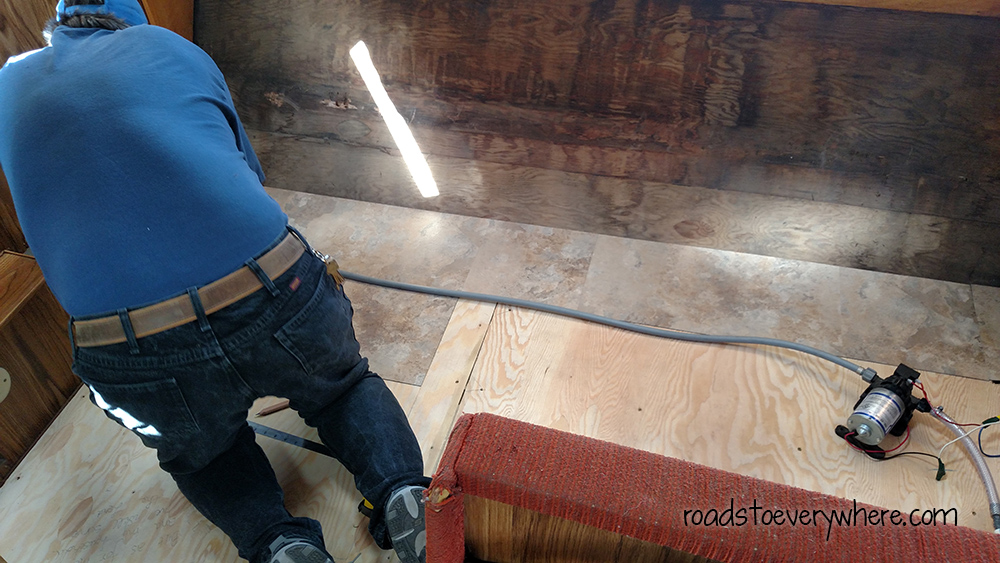 We had decided on self-stick vinyl tile, so he brushed primer on the plywood before starting to lay the tiles.

For a “patch job” I was very impressed with how nice it looks and how solid it feels. 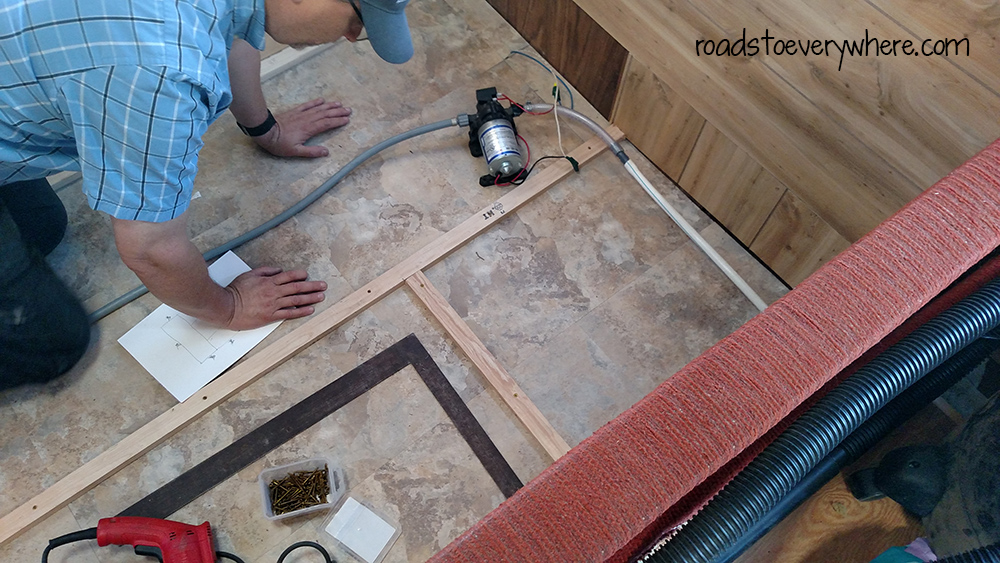 The next step was to build the bed frame. 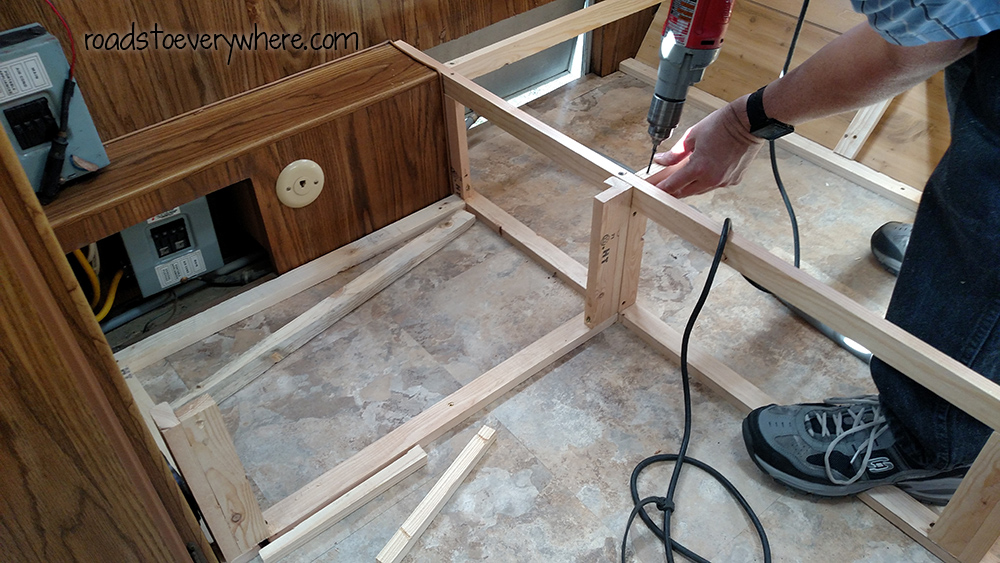 This part was more of a challenge because Lyle’s not really a carpenter either, though he does have some basic building skills. 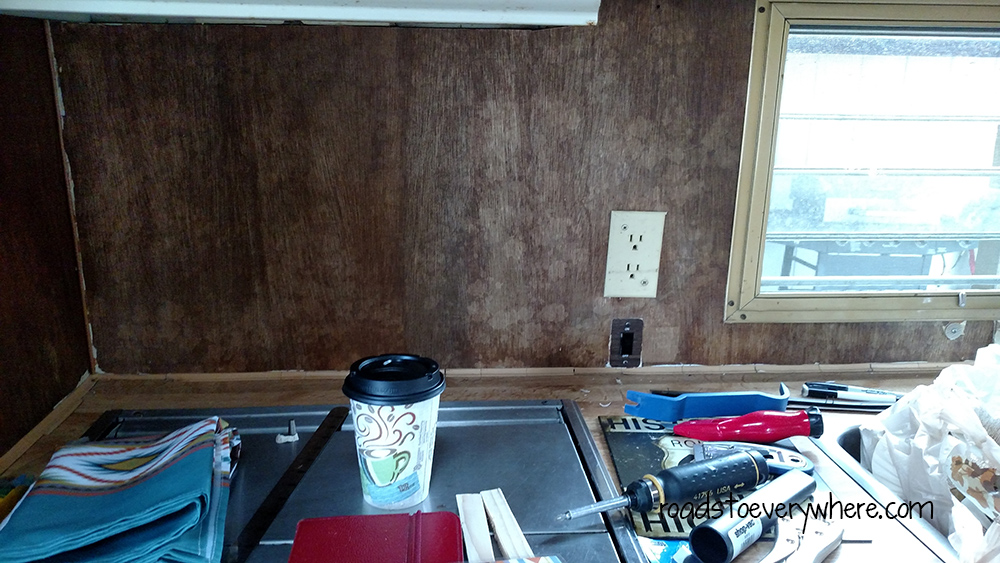 In between holding boards for the saw, I started scraping the 1980s style wallpaper off the wall around the kitchen window. I was pleased that the wood behind the wallpaper is in pretty good shape. I was amazed to find that the flowers from the wallpaper had been imprinted on the wall… kinda like a suntan! Weird, huh? 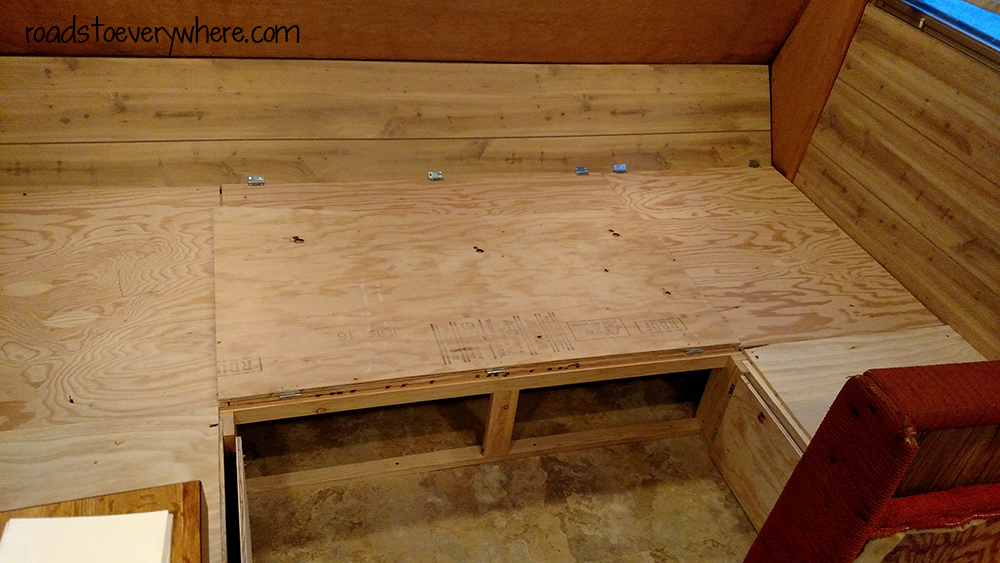 Lyle did a great job with the couch/bed frame. We had decided on a u-shaped couch… 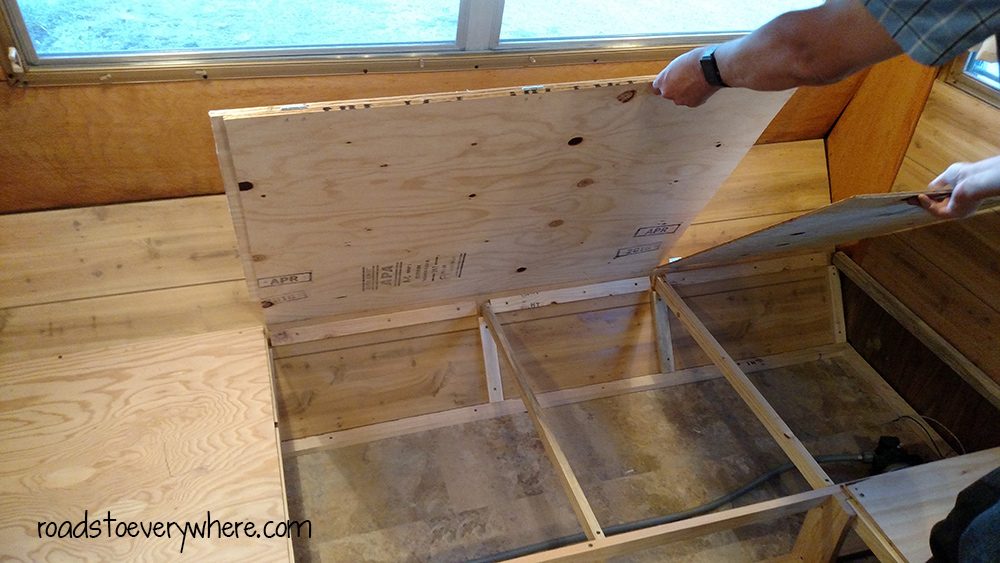 …with hinged lift-up seats for storage… 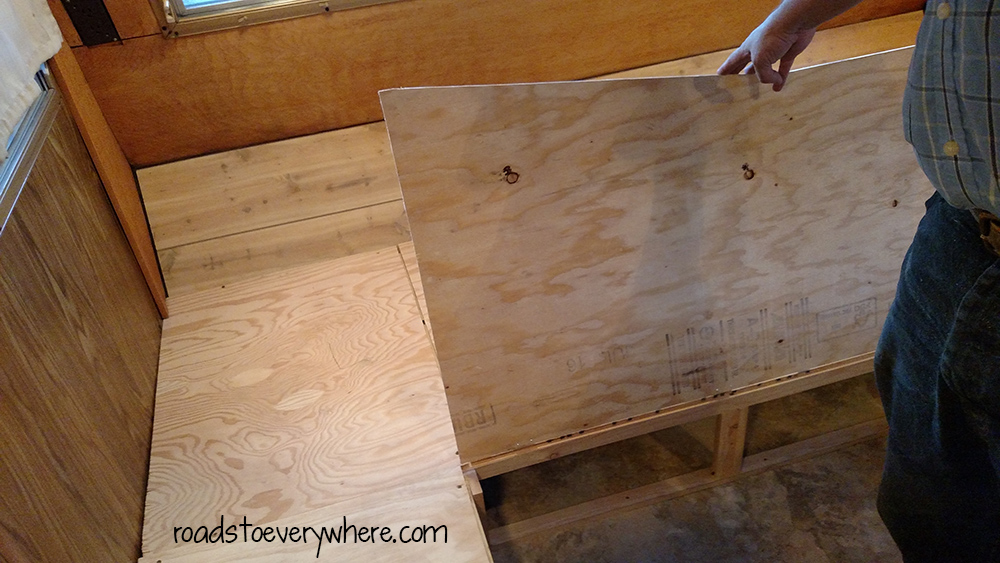 and then the board in the middle will flip out to make the bed. Then he came up with a brilliant idea for adding support to the middle piece. 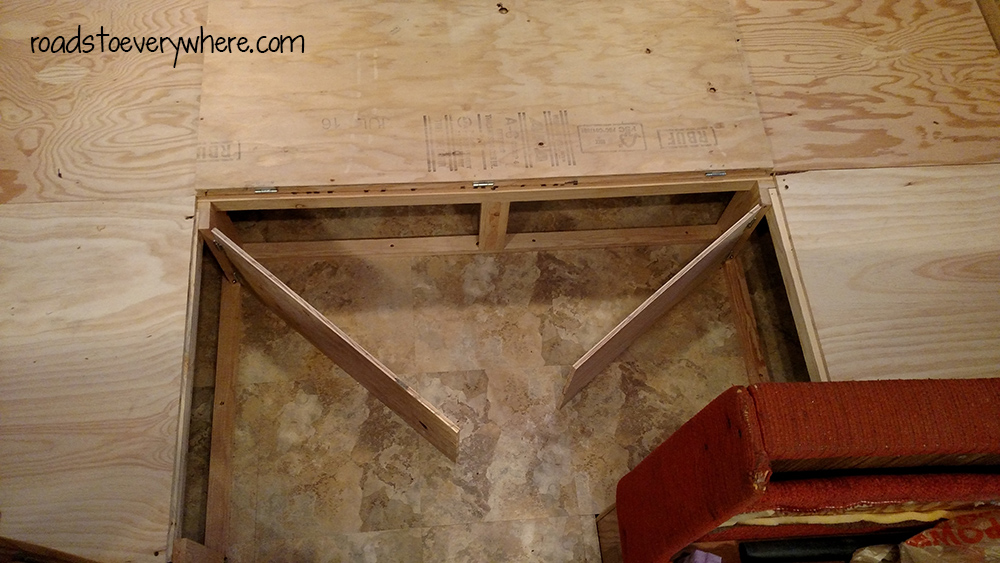 He designed the side storage compartment doors to swing out into a triangle shape when the bed is made up, so the board doesn’t sag in the middle. 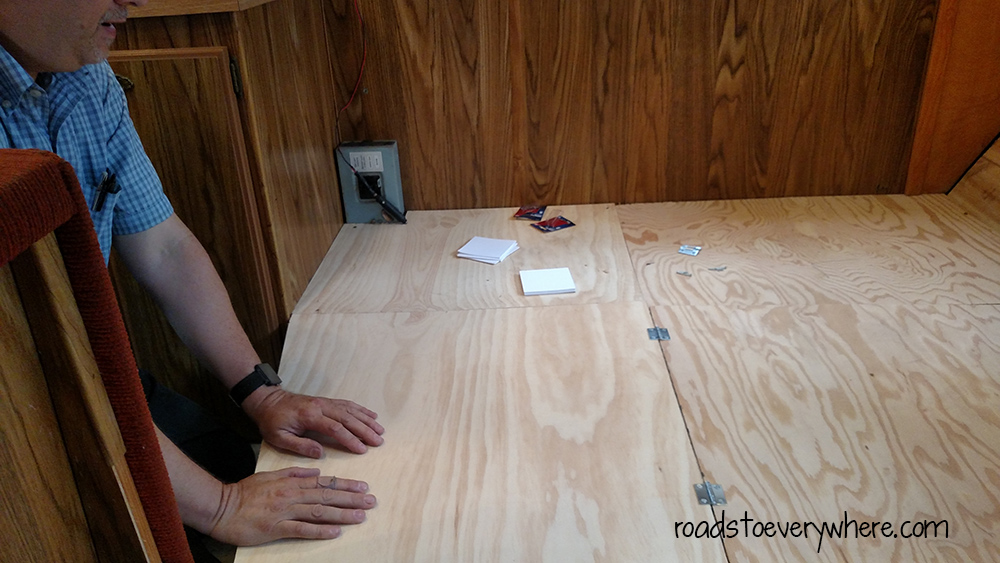 So that’s my “ta-da!” for now. Lyle’s next project is to work on the water and plumbing systems. I need to figure out about couch cushions and window curtains. And there’s painting to do.

We are hoping to be able to go camping before the month is over, though we don’t expect to be finished with the repairs the first time we take her out.