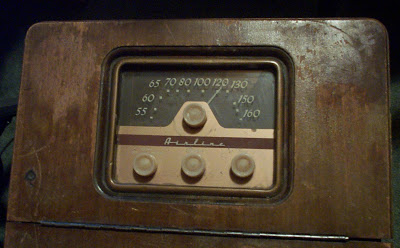 As a long-time fan of Old Time Radio shows, I’ve been wanting an antique radio for years. I didn’t care whether or not it worked. I just thought it would be neat to have one. I’ve seen replicas that are very cool (and also spendy) but they usually just have a regular modern radio or maybe a CD player inside. To my notion there’s just something very wrong about modern radio programs coming out of a classic radio! So I’ve been looking for one that had an XM receiver (because there’s an OTR channel on XM) or an MP3 player (because I have lots of OTR shows on MP3).

Well, I haven’t found one like that so far. But I have big plans for this one. My husband is pretty handy when it comes to sound systems and all things technical. So I’m pretty sure he can fix this one up for me to actually play my OTR programs! Isn’t it cool? It’s an old cabinet radio. The radio controls are on the top, not on the front. It looks like perhaps someone’s cat got ahold of the speaker fabric. On the back side is this deep cubby hole, presumably for storing records… …because the top flips open to reveal a record player! It even came with 4 records! These aren’t the 33 1/3 vinyl records I grew up with, either! They are actually the old celluloid 78s… which was way before my time. They are very thick and heavy compared to vinyl records. Also “non-breakable”. It’s a little hard to see in the picture, but one of the records had a crack from the outer edge all the way to the middle. I just thought it was ironic that the wrapper said “non-breakable.”The record player doesn’t work, nor does it have a needle, so it doesn’t really matter. But these are Big Band records, so it would have been cool to be able to listen to them. Wouldja like to guess where I got it? And how much I paid for it?

Okay. I won’t make you guess. I’ll just tell you.

A couple weeks ago, on a Saturday afternoon, someone posted that she was closing down her garage sale and she was going to pile all her leftovers out in her driveway, and if anybody wanted any of it they could just haul it off. I was very busy that day, but when I realized it was only about 4 blocks away I couldn’t resist seeing what she had.

And that’s where I found this treasure!