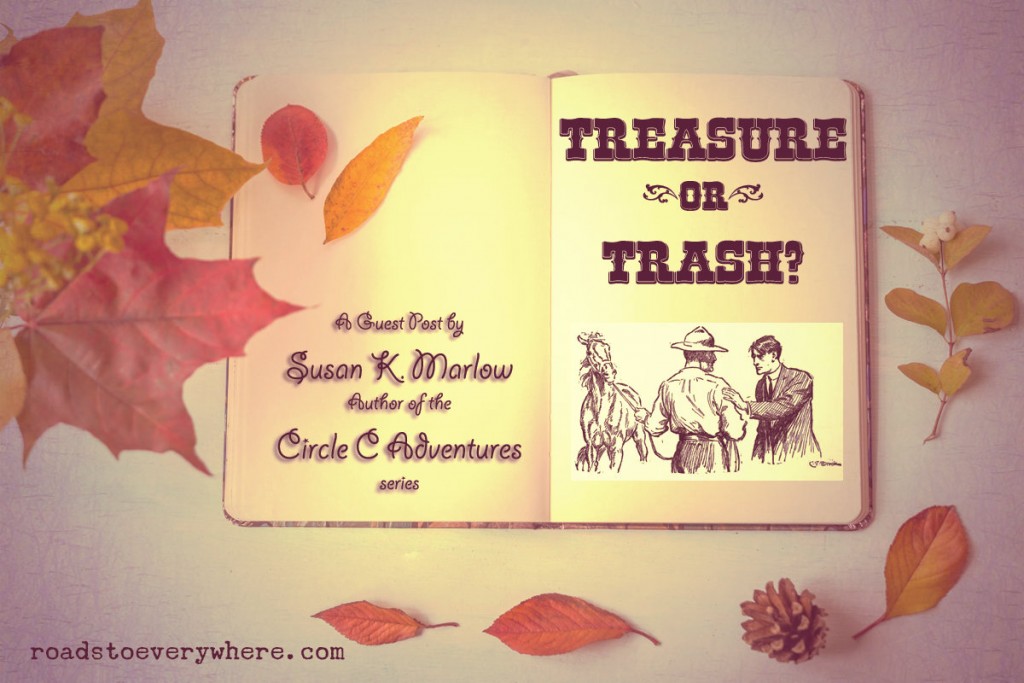 My guest today is Susan K. Marlow who writes “wholesome books for kids” with a western flair. Susan blogs as her main character at Andi Carter’s Blog.

Ready for a literature quiz?

The answer to all three quiz questions is: the “dime novel,” the paperback answer to fiction in the 19th century. Extremely popular, publishers churned out hundreds of titles—sometimes one new title a week—during the second half of the 1800s.

So, whose great idea was it to capture the hearts and minds of readers with colorful, romantic adventures and (in the process) take American literature in a new direction? A direction that lives on today in the “trade paperback” market of genre books.

A couple of fellows by the names of Beadle and Adams came up with the idea in 1860. They took the popular “serial” papers (a chapter a week in a newspaper) and decided to publish complete novels instead—books anyone could afford: ten cents. Eventually, as other publishers caught the vision and competed for readers, Beadle and Adams introduced the half-dime library, as well.

Their first published book, Malaeska, the Indian Wife of the White Hunter, tells the tragic tale of a beautiful Indian maiden who follows her heart and marries a white settler. Tragic because she dies in the end. How many authors today allow their main characters to die at the end of their romance novels?

Malaeska was a runaway hit right off the bat. It sold 65,000 copies during the first few months. (Considering the entire population of the U.S. was only twenty million, I’d say the book did well.) It didn’t hurt that Beadle and Adams chose a popular literary author, Ann Stephens, to pen the first book.

With that success under their publishing belts, the company issued several more dime novels in quick succession. One of their most popular was Seth Jones, or The Captives of the Frontier. This paperback novel was President Abraham Lincoln’s favorite story. It was written by a nineteen-year-old school teacher named Edward Ellis and sold over 600,000 copies. Go figure . . .

So, what made these books so popular? Besides the subject matter—pirates on the high seas, courageous freedom fighters in the French and Indian War, and Indians raiding white settlements—dime novels were packed with patriotic themes, high morals, virtue, and “the good guy always wins, while the bad guy always gets what he deserves.”

Why then, were preachers and teachers and “high moralists” so against these dime novels? There was no vice and very little passion in the books—squeaky clean we would call them today. The only thing I can figure is that fiction in general was on the “DO NOT READ” list of many folks during the 1800s. Here is a thought from the Reverend J.T. Crane from Popular Amusements magazine, 1869, which sums up why our youth (or anybody else, for that matter) should stay away from novels:

Let our young people be constantly on their guard against the mental enslavement which marks the confirmed novel-reader. Common novel-reading is a fearful evil, and against it there are arguments numerous and weighty, which all will do well to heed.

Just for fun, I have included the opening lines to a dime novel.

Too Late for the Stage

Did you ever hear of a more uninviting name for a place, dear reader? If so, you could not well find a harder role, where dwelt humanity than Death Notch, along the whole golden slope of the West.

It was said that nobody but rascals and roughs could exist in that lone mining-camp, which was confirmed by the fact that it was seldom the weekly stage brought any one there who had come to settle . . .

The main character in my Circle C Adventures books, Andi Carter, loves to read dime novels. I haven’t quite figured out how to incorporate such a “vice” into a storyline yet, but with three older brothers, Andi has access to such reading.

Which side of the “dime-novel debate” would you would find yourself, if you were living during the 1880s? Try and imagine yourself with young teenagers. Would you want them to read these books? Would you take the “high road” or would you embrace the dime-novel “mania”?

{Linking up with Literary Musing.}