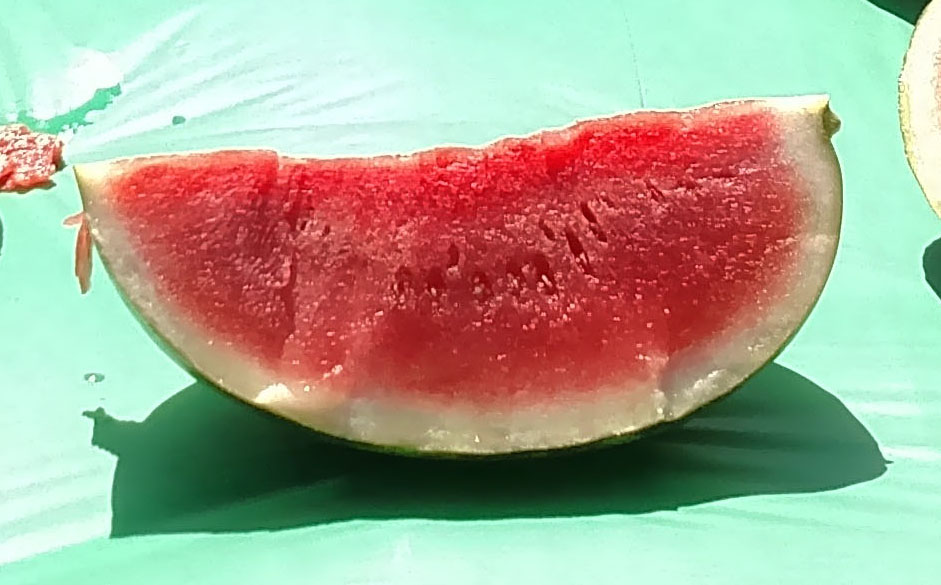 Have you ever participated in, or even been to, a watermelon-eating contest? I hadn’t, until this past Saturday at Rathdrum Days.

I mentioned before that I was on the committee to help plan Rathdrum Days this year. My job? Entertainment coordinator for Saturday afternoon. Which must include, I was told, a watermelon-eating contest.

I had many questions.

How does it even work? Are there age categories? (Yes. Five groups.)

Is it a timed contest? (Yes. Whoever can eat the most watermelon in 1 minute.)

Do people sign up for it? (No. They just show up. Anyone who wants to participate can.)

Are there prizes? (Yes. McDonald’s donates Happy Meal/Value Meal cards for the winners.)

And then there were the logistics.

Where do we get the watermelon? (Super 1 donates it every year. They have it cut and wrapped and ready for us to pick up. We need someone with a truck to go get it.)

Where do the tables come from? (Just pull them over from the eating area. Get tablecloths at the dollar store. And plenty of paper towels and wet wipes.)

Who judges it? (A team of volunteers. And Joe will help. He has been the announcer a lot of years and he knows what to do.)

Okay. Great. I got this.

(Not really. I still felt like I had no clue.)

To start with we checked to make sure Super 1 was still willing to donate the watermelons this year and McDonald’s to donate the prizes. They were.

I lined up my volunteers. Made sure Joe was still on board with it. Bought the supplies. Added dollar store leis to present with the McDonald’s cards, just for fun. And we were good to go.

About an hour before time for the contest, I checked with the volunteers and the guy with the truck to make sure it was still on their radar. It was.

Once the previous stage act finished up, we dragged a couple of tables over in front of the stage and put the tablecloths on. Joe announced that the watermelon contest was up next and invited people to participate. All that was left was for the guy with the truck to bring the melons.

Five minutes before time to start we got a call. Our pick-up guy was at the store… but they weren’t expecting him! Turns out, I thought someone else had called to confirm the melons… and she thought I had called.

The store was still willing to donate them. It would just take a few minutes for them to get them loaded. Fortunately, Super 1 is next to the high school where Rathdrum Days was in full swing.

Joe was in the middle of announcing that the watermelon contest was about to start. I had to go up on the stage and tell him that there would be a 20 minute delay. We wondered if that would push the remaining entertainment 20 minutes off schedule, too. I suggested we might need to combine some of the age groups to have a shorter contest. Joe didn’t think so. He thought we still had time to get them in. Since he had experience with the contest I deferred to his judgment.

It was actually closer to 30 minutes later when the truck arrived with the watermelons. Volunteers gathered around to unload the melons. That’s when we discovered that the watermelons had not been cut at the store. We had 600 or so pounds of whole melons.

What were we to do?

Someone suggested we could say the contestants had to first smash the melons open and then eat them. That was a joke, of course. Someone else volunteered to run to the hardware store to buy a knife. That would further delay the contest, but I didn’t see where we had any other option.

In the meantime, potential contestants had been gathering around. Including a group of tough-looking biker dudes from the BATAA (Bikers Against Teen Addiction and Abuse) booth.

“We got knives!” they said. And boy, did they. We aren’t talking about pocketknives. These were some serious blades, easily big enough to cut up watermelon. They went and washed their knives and proceeded to quarter the melons in short order. 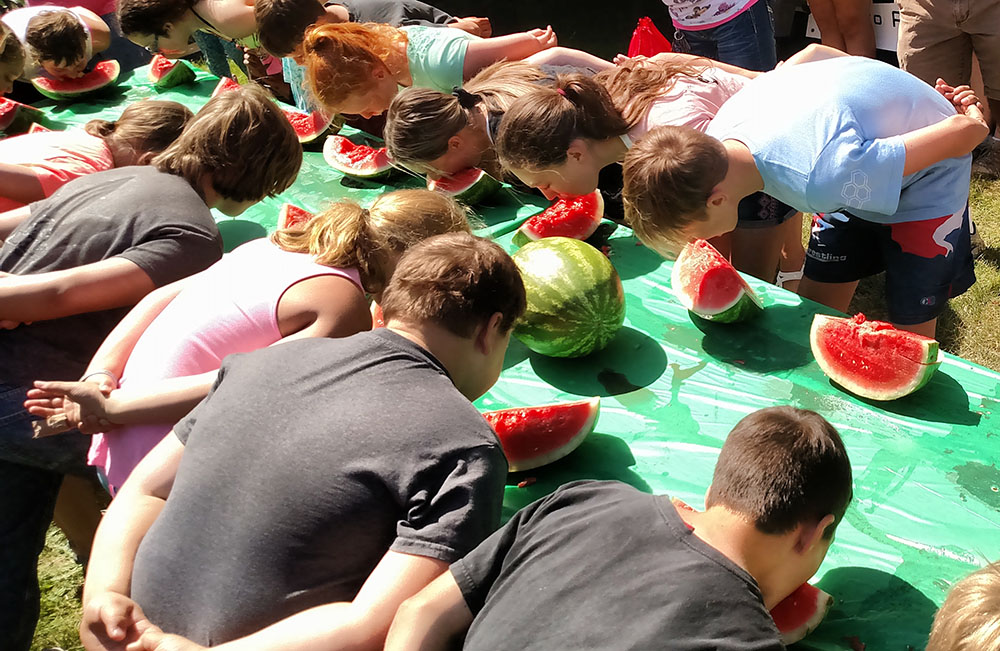 And so finally the contest could begin. I was surprised at how popular it was. Everyone had a great time. Prizes were awarded.

And the next act took the stage right on time.

It all worked out, but I was sweating it there for a little while.