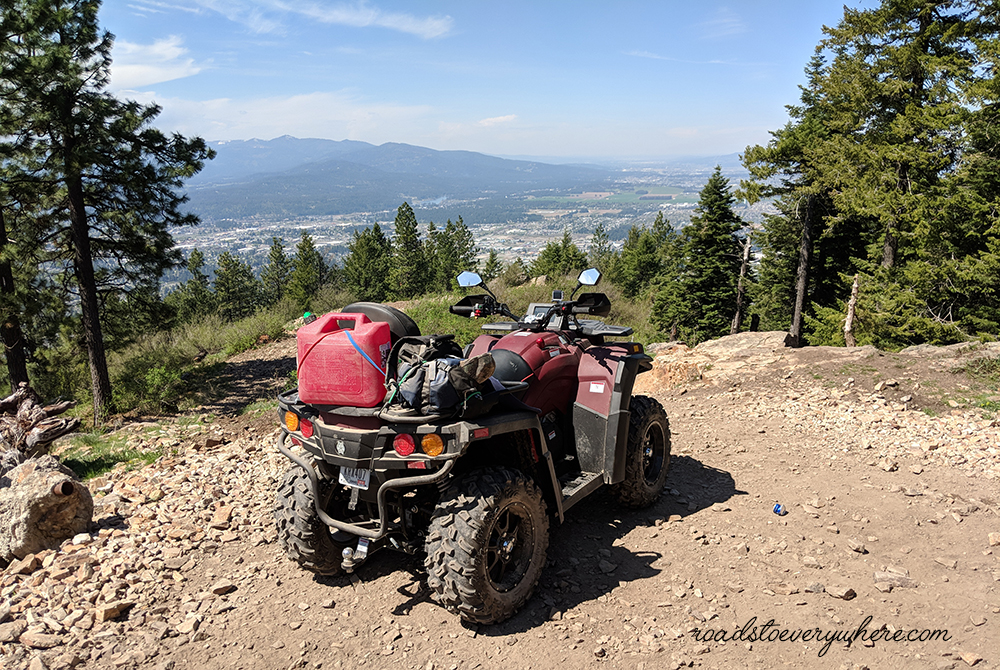 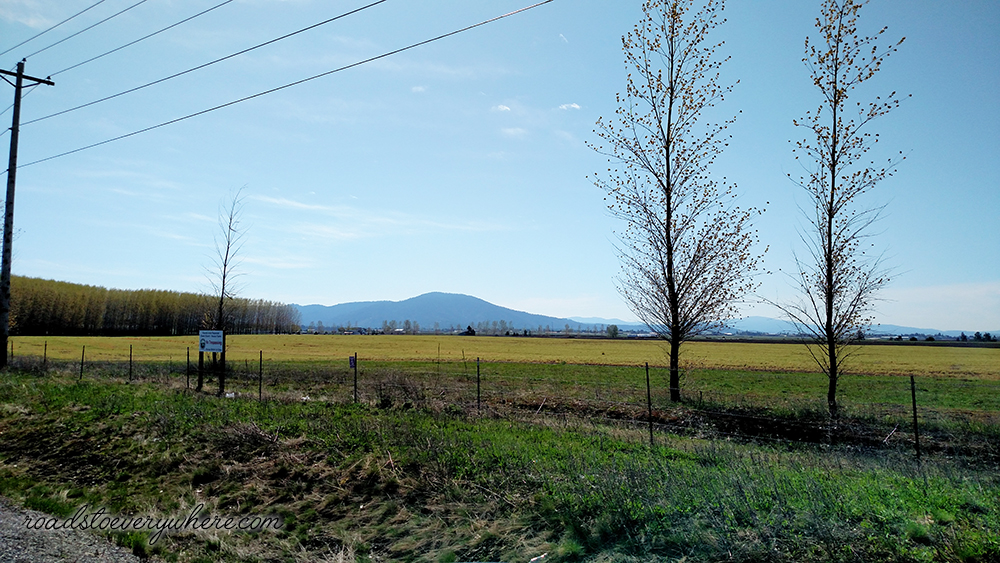 The weather was lovely last weekend so we decided to take the ATV out for a long-awaited back-roads ride. We chose Canfield Mountain, overlooking Coeur d’Alene, for our first excursion. There is an extensive forest road up there that is limited to vehicles narrower than 50 inches (i.e. ATVs and Motocross bikes) so it’s an area we haven’t been able to access by car. 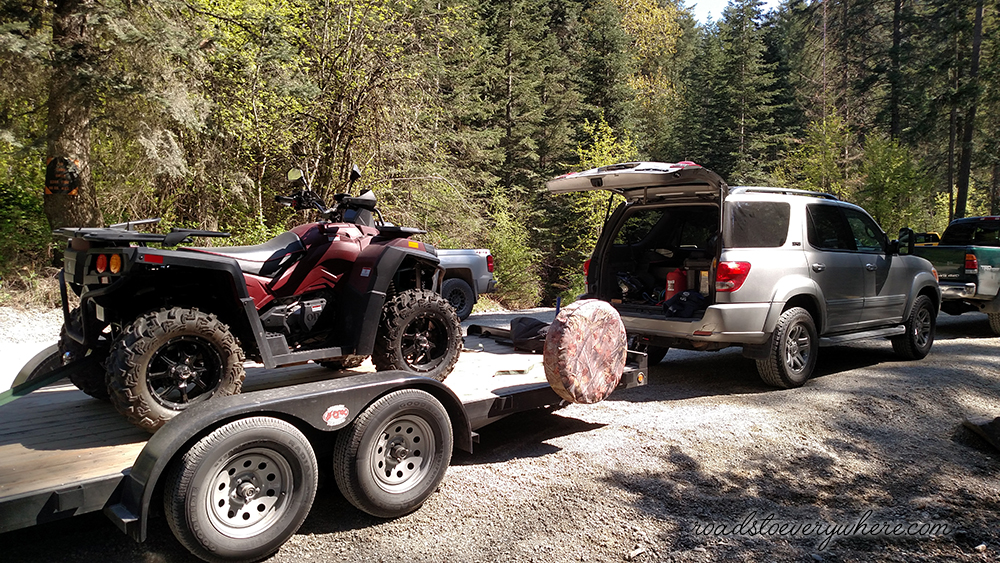 It’s the closest such area to Coeur d’Alene and thus, very popular. We arrived at the parking area mid-morning to find it already quite full. We unloaded the ATV, put on our helmets, strapped on our gear, and set off.

We were ready for anything! 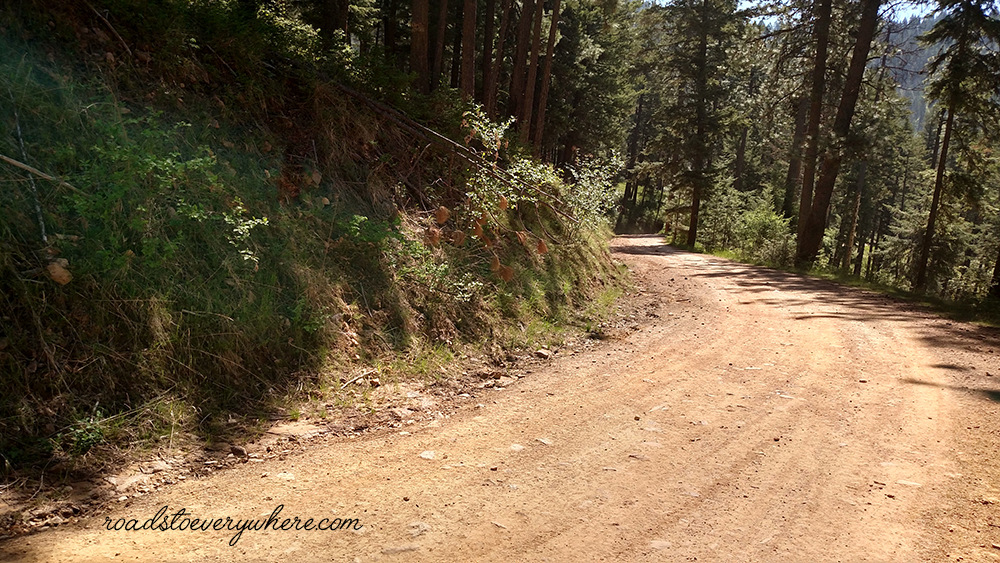 It was truly a gorgeous day. Sunny with temps in the low 70s. 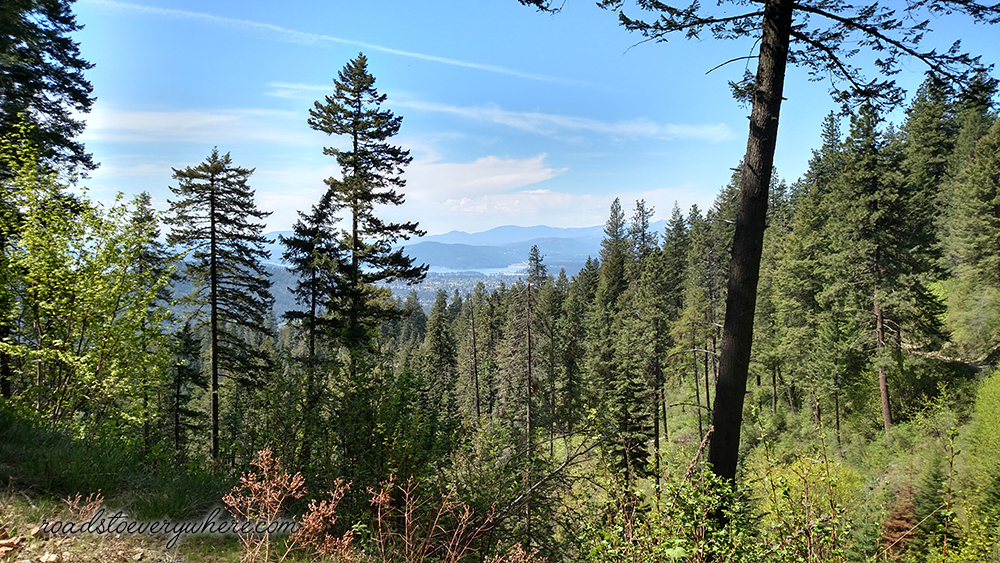 The view was spectacular. We could see Lake Coeur d’Alene through the trees shimmering far off in the distance. 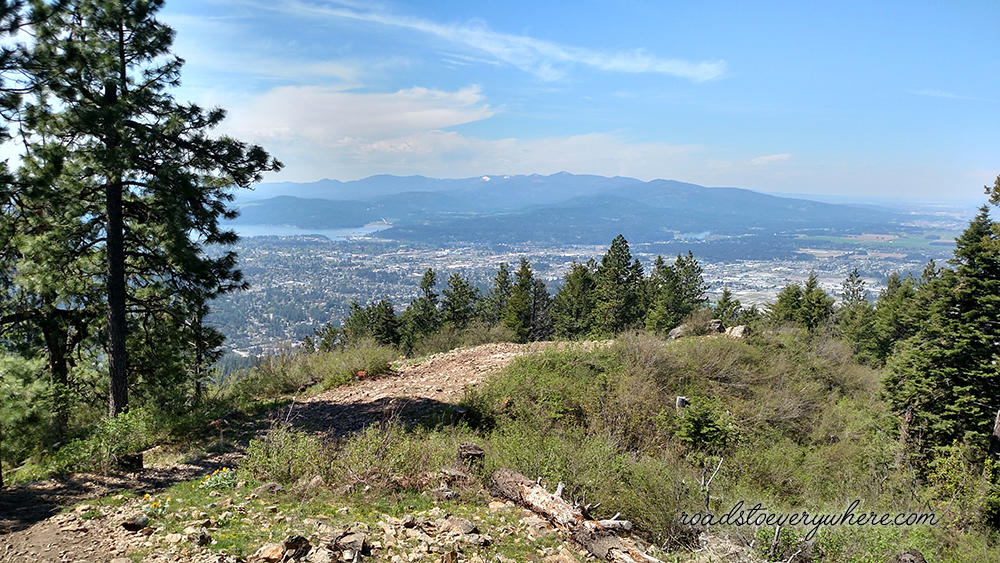 After a half hour or so, we reached a clear-cut area where there were satellite towers and such. We were able to see a broader view from there. We got off to stretch a bit, drink some water, and of course, take pictures.

You’ll notice the gear we had strapped onto the back of the ATV. It’s important for you to notice this.

Yep. We had planned carefully and were prepared for anything. 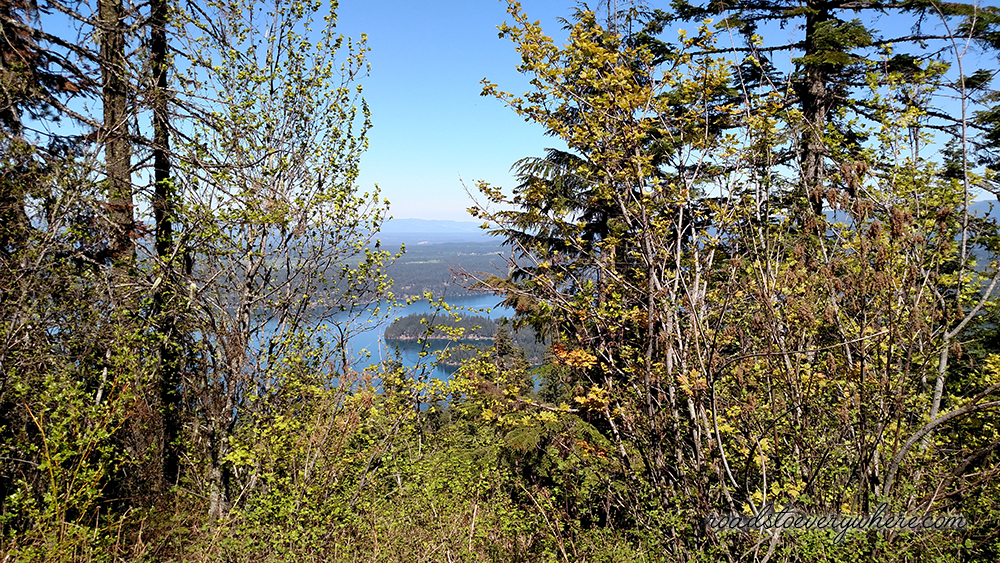 As we continued on our way we glimpsed another lake around on the other side of the mountain. We’re pretty sure that’s Hayden Lake. 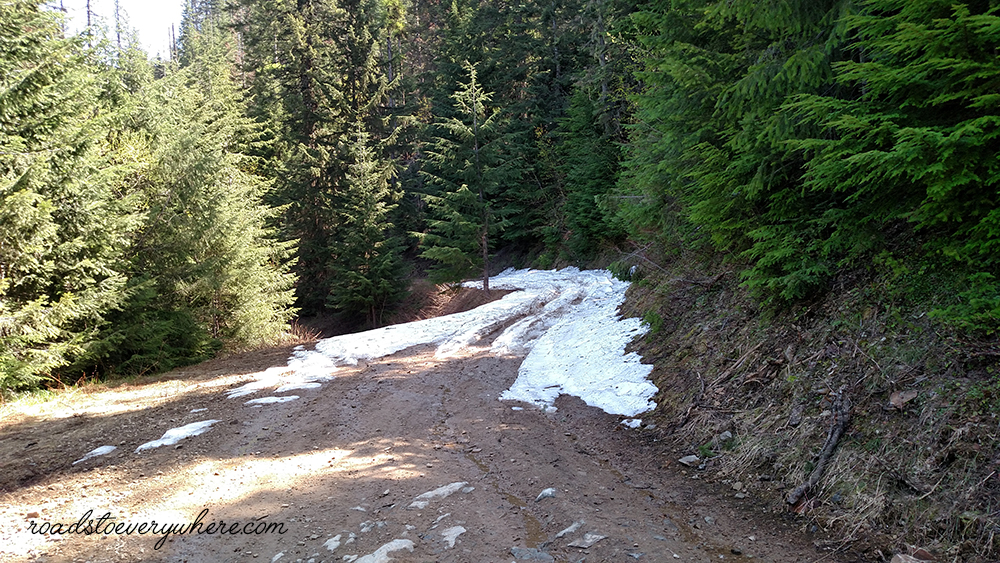 And then… we encountered snow. We didn’t think too much about it.

Even though the day was warm it does take awhile for all the snow to melt away in the shady areas of the mountains. We buzzed right through the first patch, kicking up slush as we went.

The next patch was a little deeper. That didn’t deter us. We fearlessly plunged in. 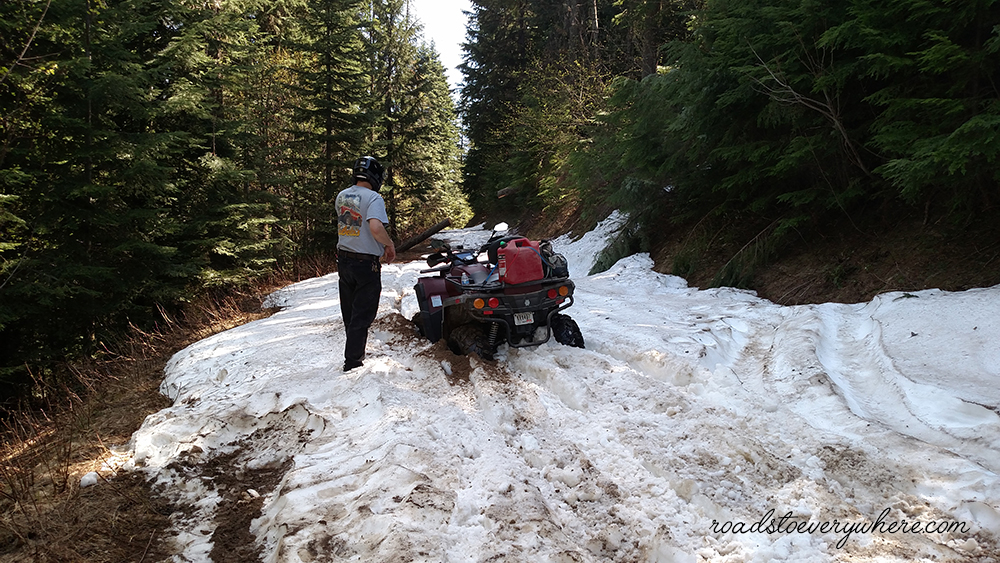 And, of course, got stuck.

You saw that coming, didn’t you? 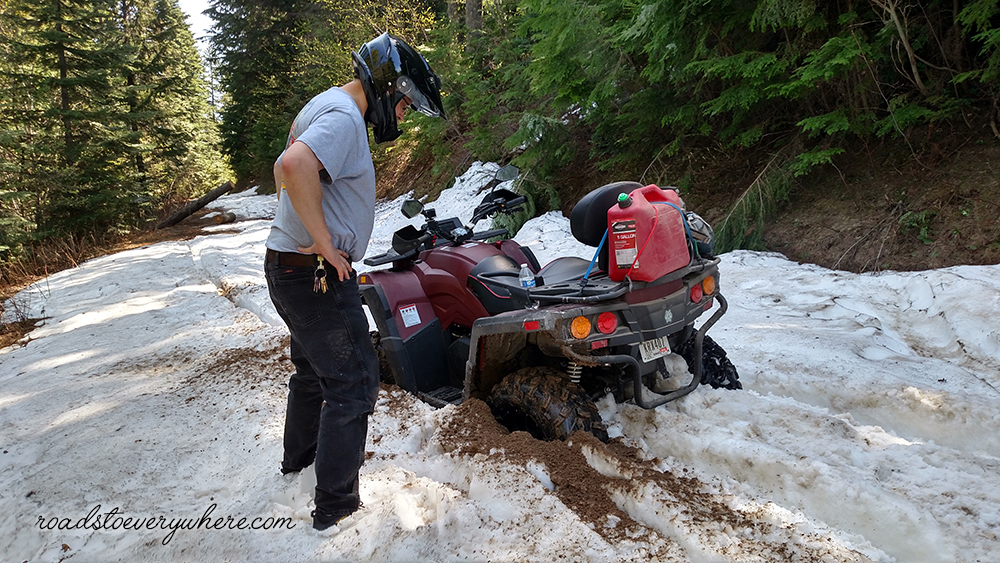 Lyle analyzed the situation, then with much revving and bucking and splatting of mud and slush he finally was able to back out of the mess. 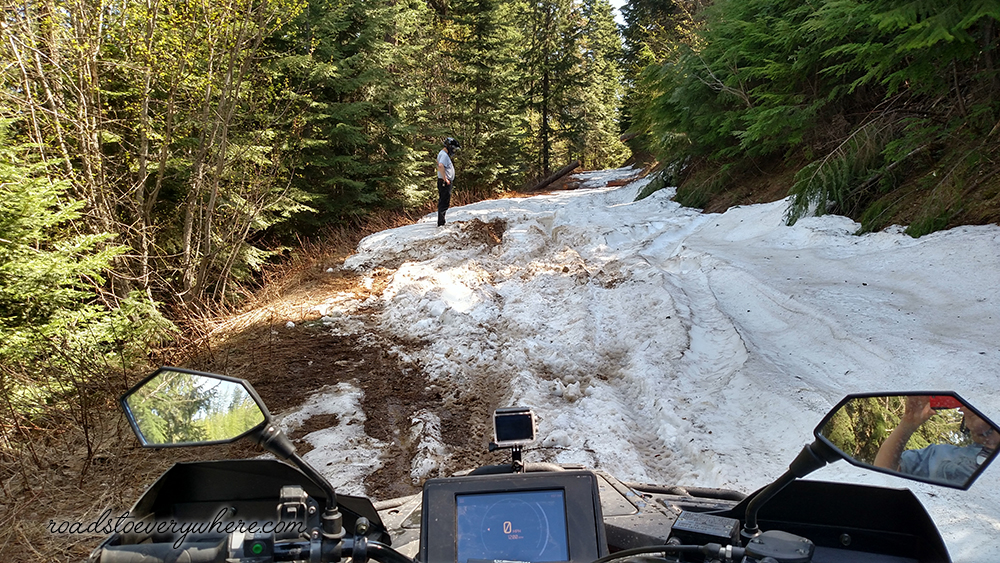 After looking over the ruts and considering the depth of the snow on the road ahead, he decided we’d give it another go and make it on through.

I was just along for the ride and he didn’t ask for my input. 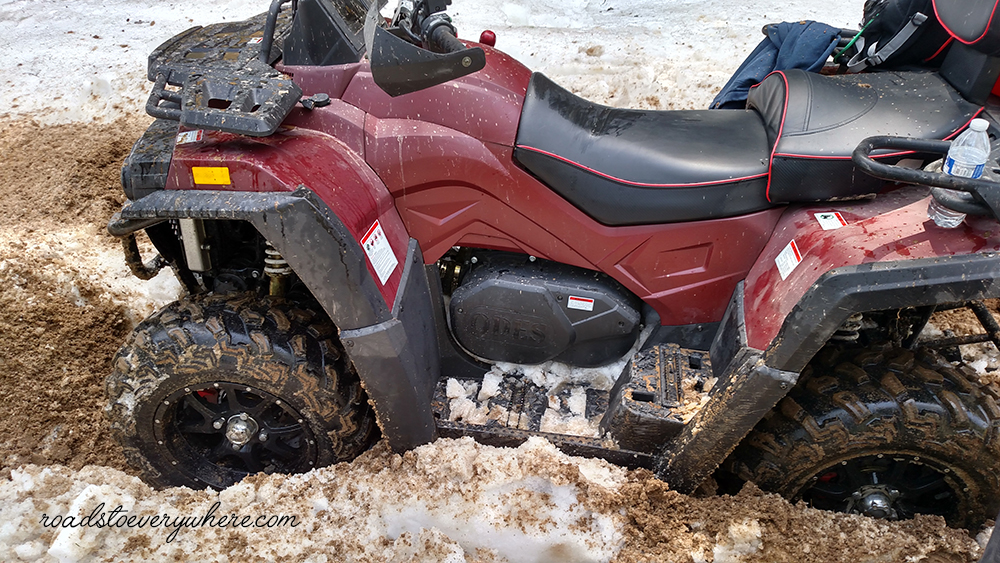 Betcha can’t guess what happened next, can you? 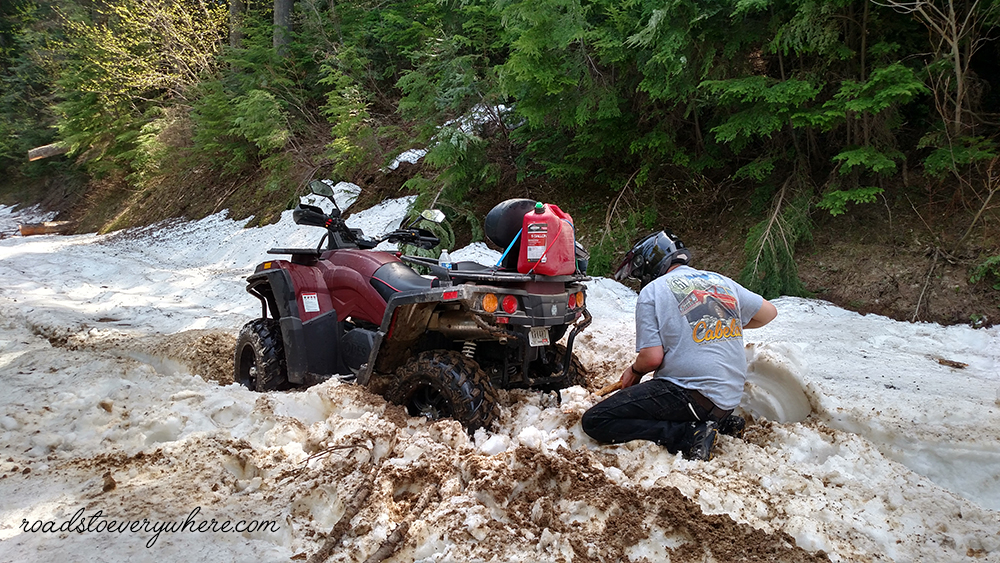 Remember how well prepared we were?

What we didn’t have was anything to dig with. We own a little folding shovel and I had thought of it once when I was gathering up our equipment, but I ultimately forgot it.

So we found some sturdy sticks and tried digging with those. They didn’t work very well. 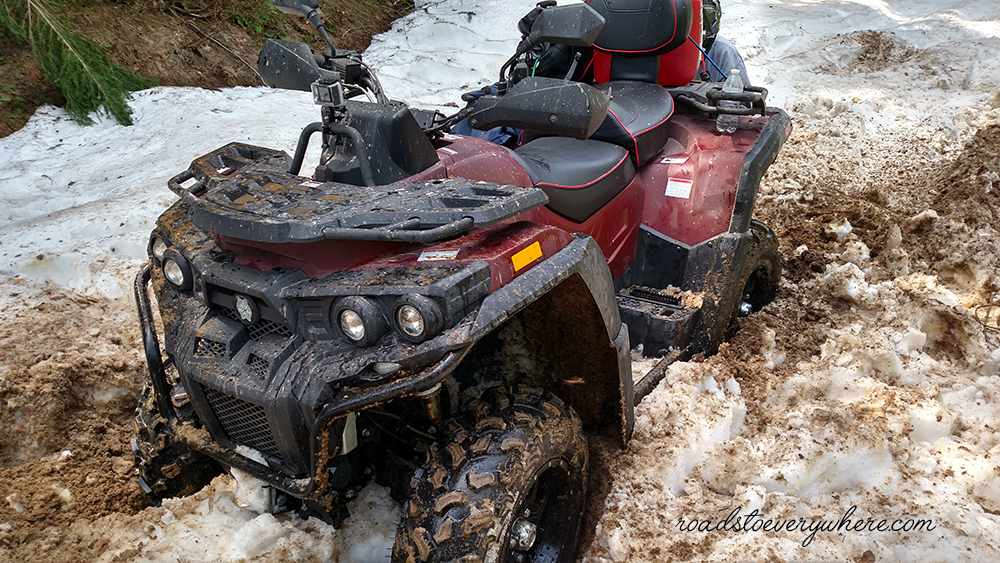 It was muddy and wet and sloppy, but not particularly cold. Which seems a little weird with all that snow.

After probably a half hour of attempting various ideas, we were still stuck.

Finally we heard ATVs coming up the road behind us. We watched for them to come into sight, hoping they might have something that would help.

There were about four of them. They pulled up just as soon as they saw the situation.

And in no time, he did indeed have us out.

We turned and headed back the way we came, waving our thanks to our rescuers. 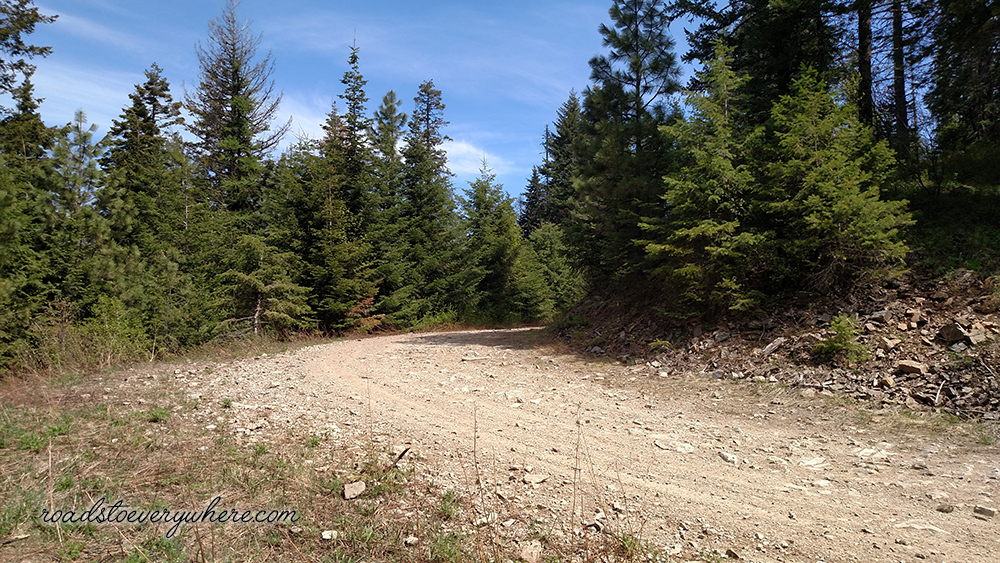 Lyle said, “I think we could have made it the third time, since we had those ruts in there now.”

I just shook my head, glad he didn’t insist on trying it.

We made a note to add the folding shovel and a tow strap to our gear. 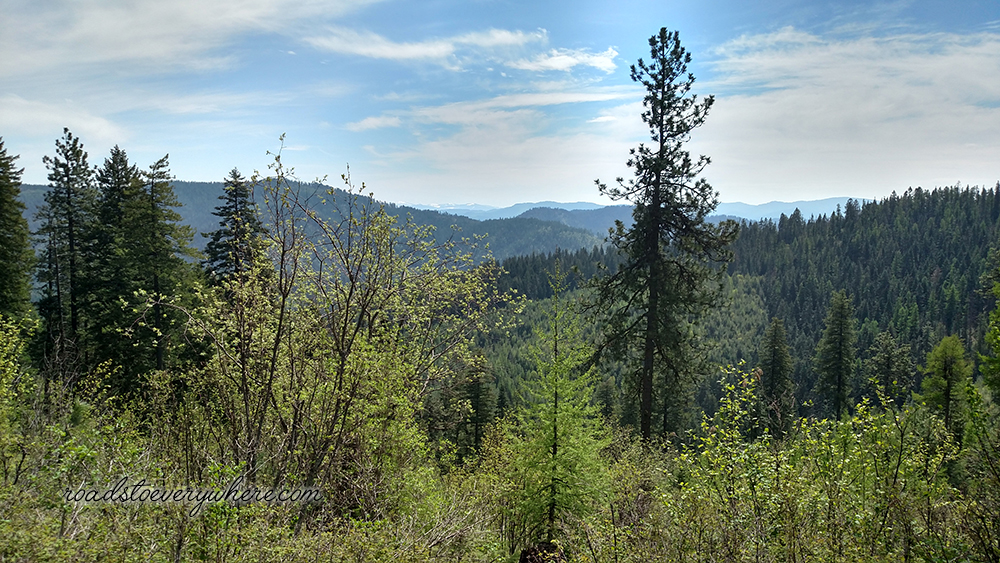 We enjoyed more beautiful views as we headed back to the parking area. 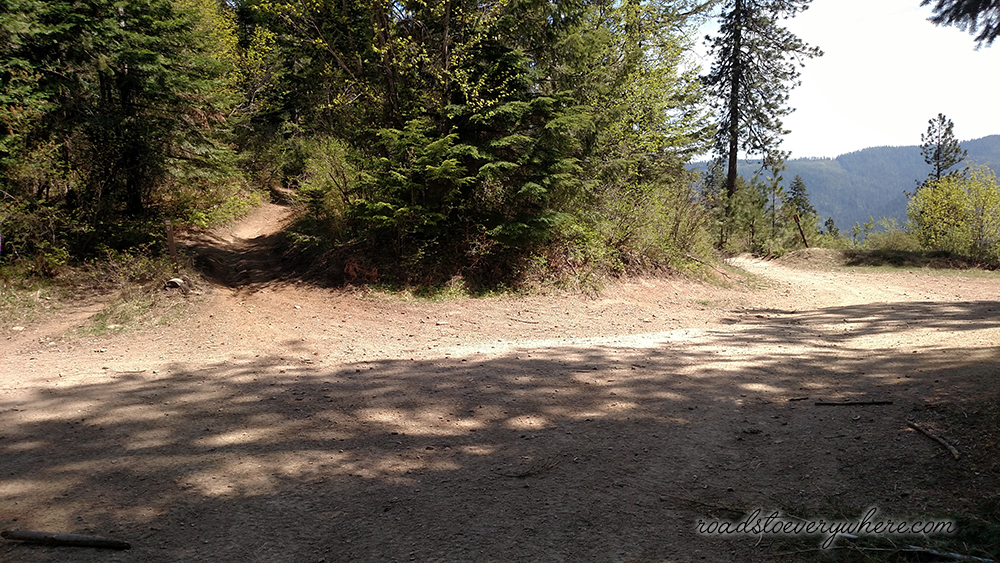 So many little side roads yet to explore. I’m sure we’ll be going out many more weekends to come.

And that business of getting stuck in the snow in the mountains in May?

Yeah, that’s not the first time that’s happened to us.

I was video-chatting Laura throughout our “ordeal” and she said it brought back memories of the time we got stuck in 2009.