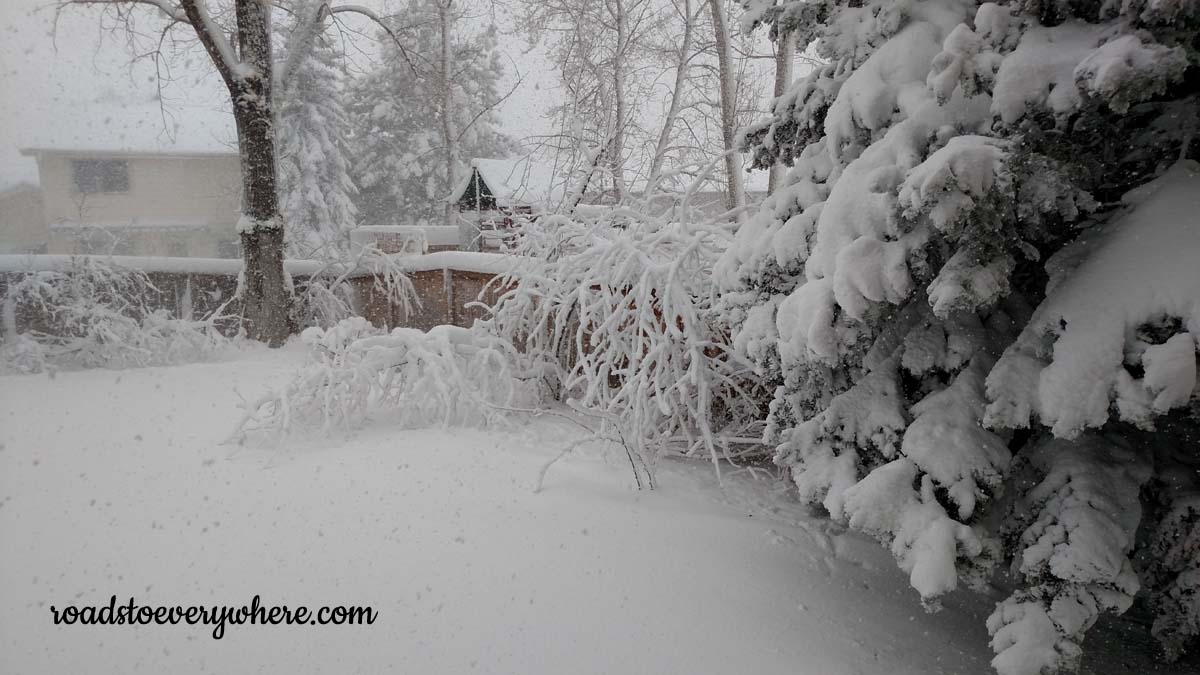 We’ve been enjoying lovely spring weather. It was such a pretty day on Tuesday–with temps in the low 70s–that I decided to eat my lunch on the deck. Rebecca fixed me a grilled-cheese sandwich.

“Don’t you want to take a picture of your lunch, Mom?” she asked. 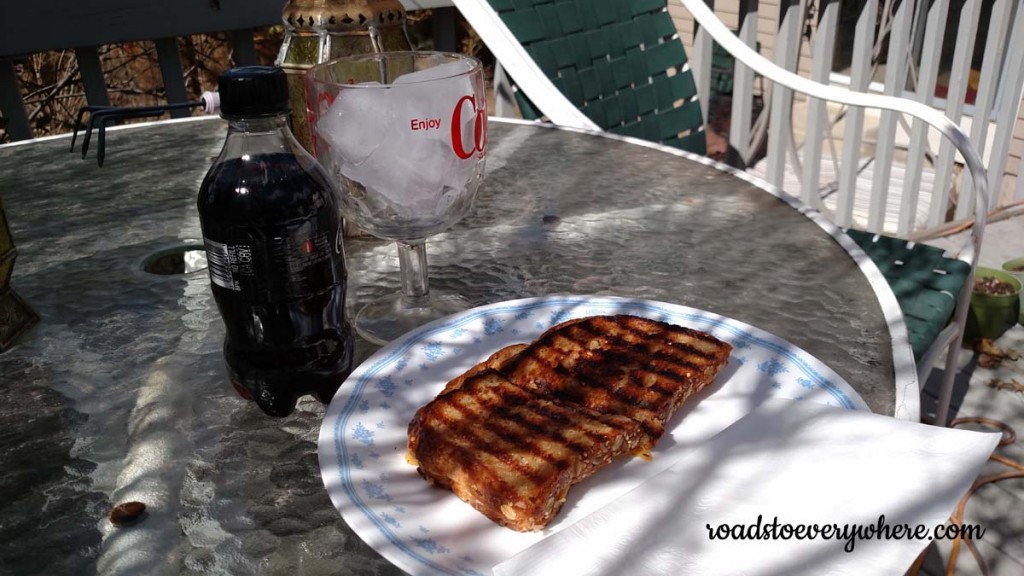 Of course I did.

On Wednesday morning when I got up, the backyard looked like this: 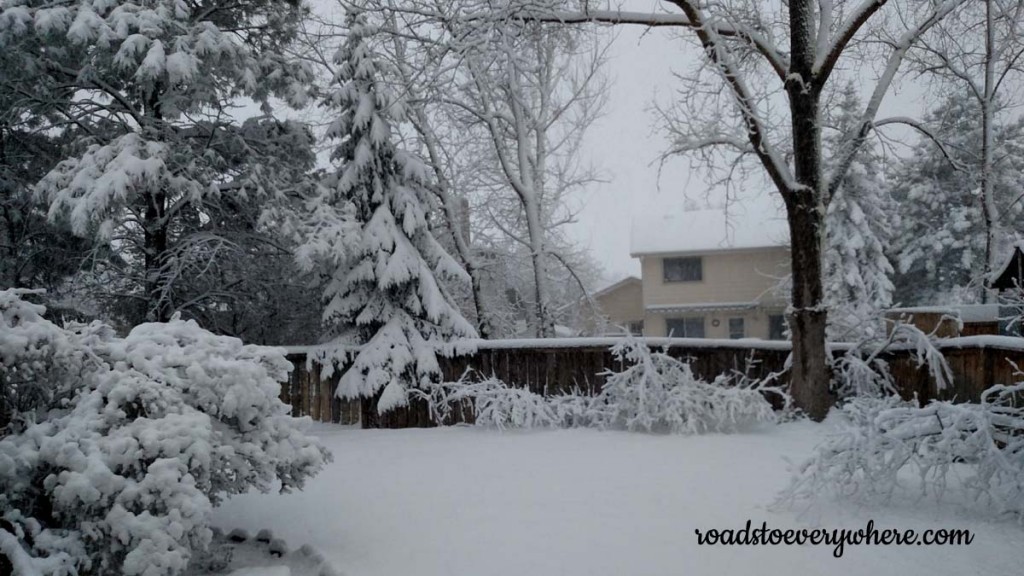 It was my day off and I had promised to go with Laura to her eye doctor appointment at 10:00. It’s such a challenge to schedule an appointment at a time we both have time off, so we decided not to cancel and ventured out. 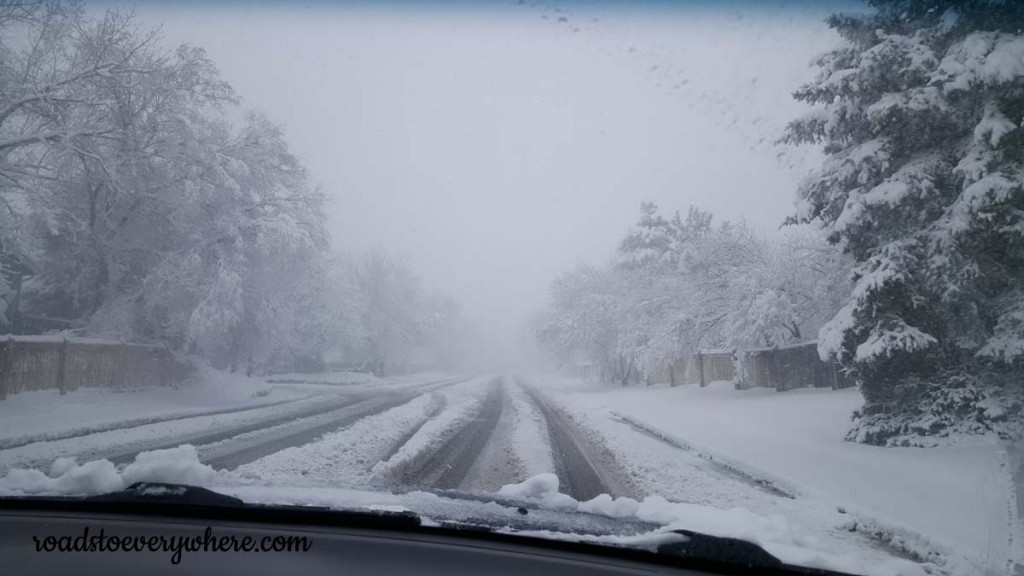 Frustratingly, the doctor did decide to cancel after we got there. It would have been nice if they had given us a call so we wouldn’t have had to get out. But they didn’t. *sigh* So we went back home.

It was snowing at a rate of 2″-3″ per hour and really piling up. 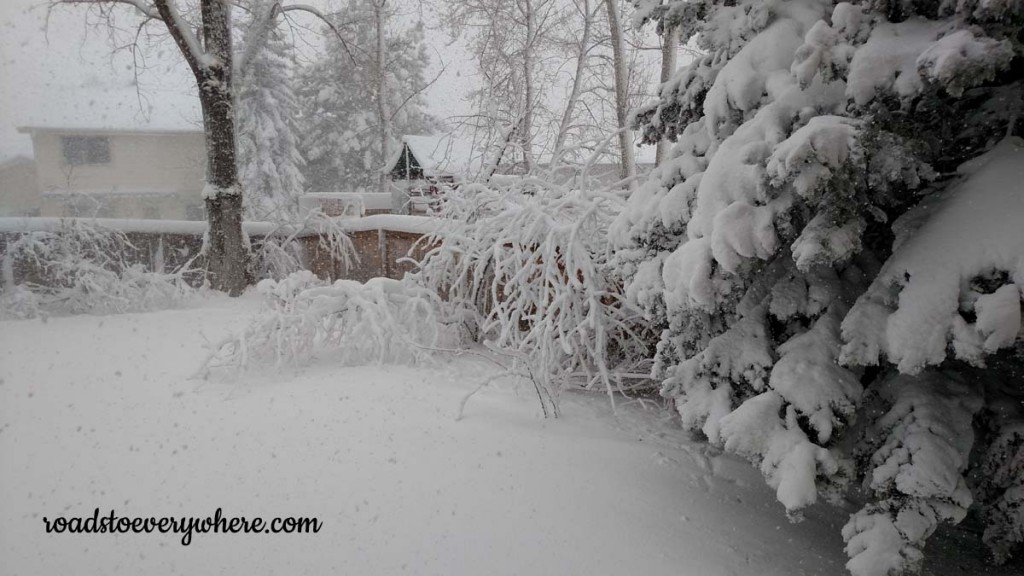 The kids decided it would be fun to get in our little hot-tub. I was amused to peek out the window at them and see that they had pulled a piece of insulation up over their heads. The snow on the deck had accumulated in just a few hours. 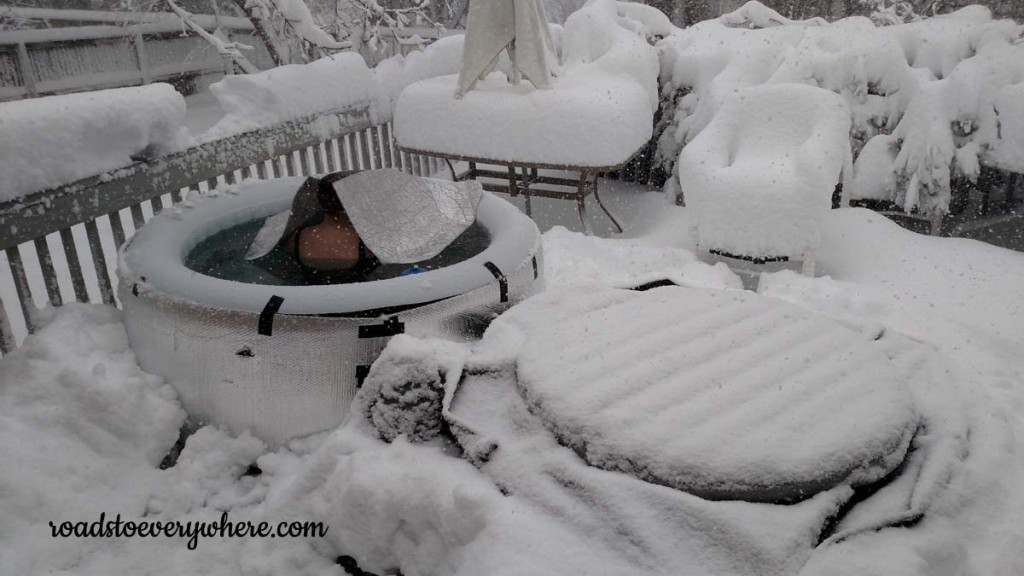 Lyle texted that the print shop where he works was closing early, so he would be home in time for lunch. Dillard’s called Laura that they were closing the store, so she didn’t have to go in either. Lyle said visibility driving home was really bad. 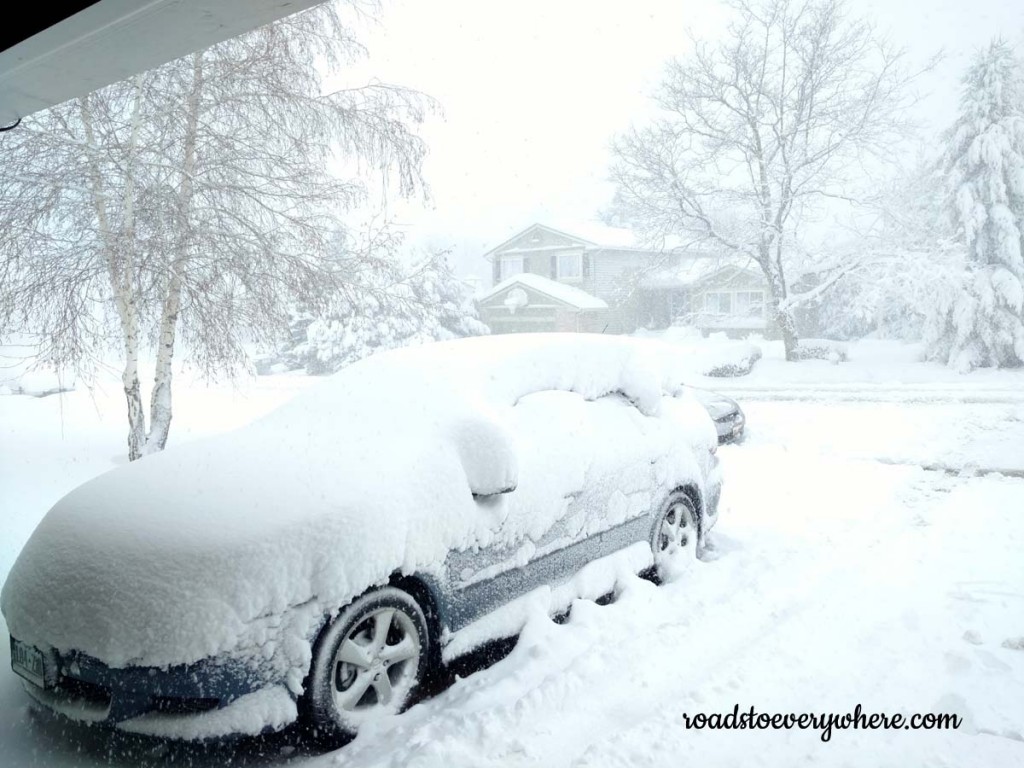 I put a big pot of ham-and-beans on to simmer and we enjoyed an unexpected day at home.

The snow finally stopped late afternoon. I read that it was a record-breaking snowfall for one calendar day in the Denver metro area: 13.1″.

Lyle and the kids went out to shovel. Laura was trying to brush the snow off the roof of her car and made tunnels with the brush. 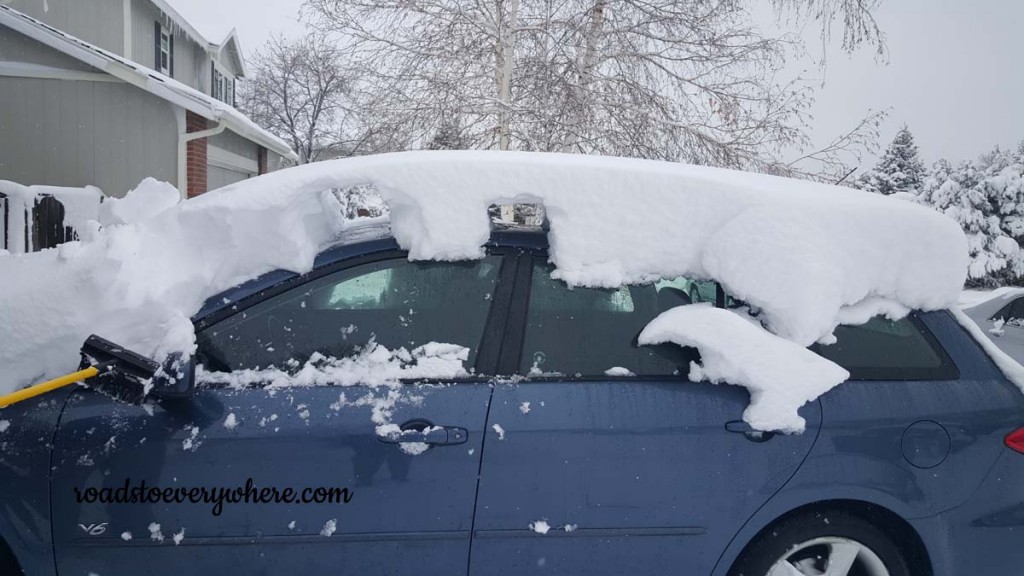 This morning the sun came out. 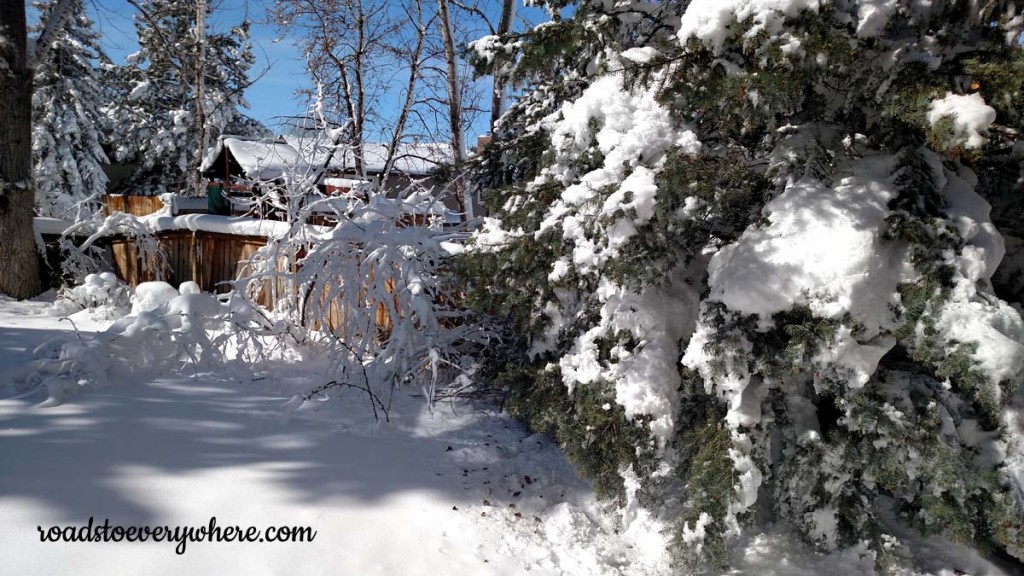 The eaves have been dripping all day. The streets and sidewalks are one big puddle. What a mess.

One of the local news channels thought the snowstorm should have a name, so they took a poll: 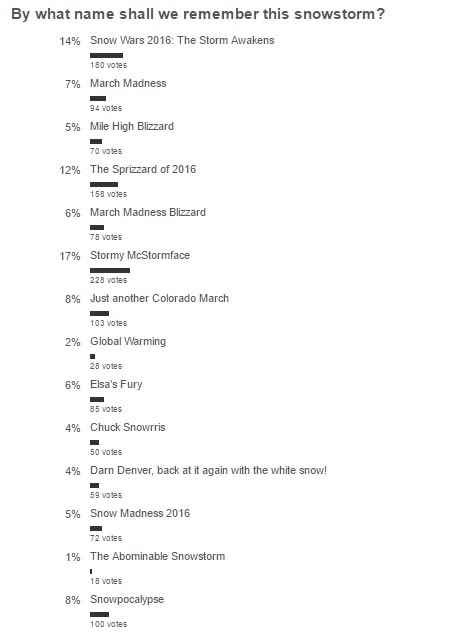