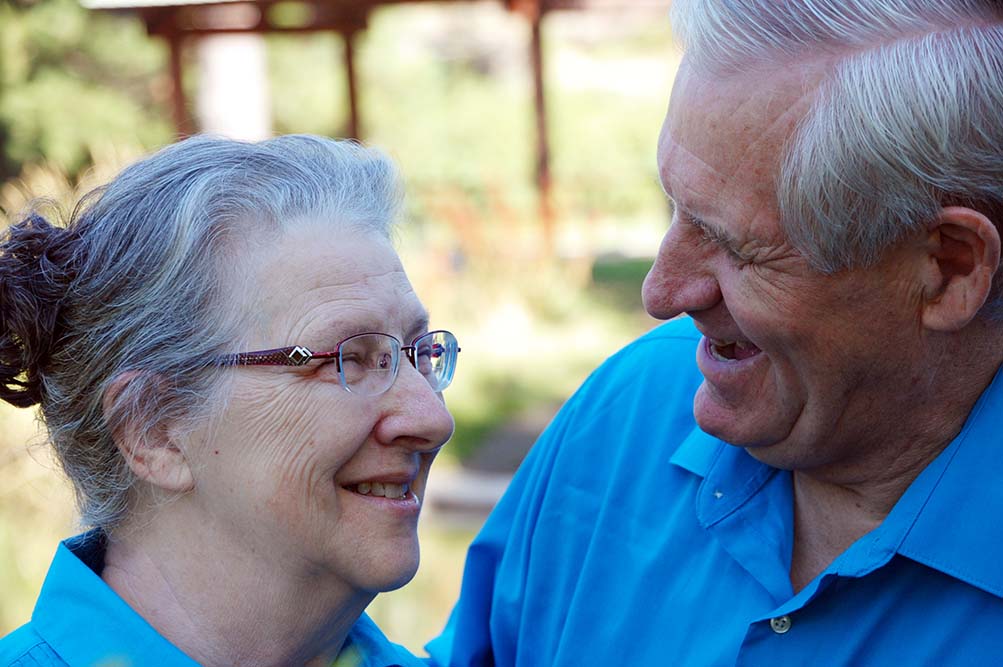 My parents celebrated their anniversary this past Sunday. I decided it would be fun to interview them about marriage. They live in Arkansas, in the Central time zone, which is two hours later than it is here, so I allowed them time to have their Sunday afternoon naps before I called them. It went something like this…

Me: [singing] Happy anniversary to you… and Daddy!

Mother: Thank you! Let me see if he picked up.

Dad: [chuckling] Yeah. I picked up.

Me: So what number am I? [For every special occasion they keep a tally of how many calls they get from their kids.]

Mother: Well, Uncle Paul called but he doesn’t count in the race. [Uncle Paul is one of Mother’s brothers.]

Dad: He’s not part of the children.

Me: Oh, so you only count the children’s calls? You don’t want other people calling you?

Dad: We didn’t say that.

Mother: But we don’t count the order number except for the kids.

Dad: But yeah, we think it’s pretty late in the day just to get 2 calls.

Mother: Dori called at 6:15 this morning.

Me: Seeing how that would have been 4:15 my time I don’t think I could’ve beat that.

Mother: No, I don’t think you could’ve either.

Me: I guess I could’ve called you at midnight my time last night. That would’ve been 2 o’clock in the morning.

Mother: You could’ve done that.

Me: Well, I was gonna interview you so I could write a blog post about you. Is that okay?

Mother: Yeah, I guess so. We’re up for interviews. Are you home or are traveling?

Me: We’re traveling. We just came through the Tri-Cities. We went to Seattle and then we drove down along the Oregon coast, and we’re on our way home now.

Mother: I don’t know where the Tri-Cities are.

Me: It’s kinda down close to where Sandra used to live.

Mother: Oh, yeah. I remember her talking about the Tri-Cities.

Me: It’s close to the border of Washington and Oregon.

Mother: Yeah. Okay. Well, you got your printing picked up, I assume?

Me: Tell how many years you have been married.

Mother: Do you know, Daddy? [She was testing him.]

Me: And all these years… you don’t necessarily always agree with one another, but I don’t believe that I’ve ever known of you to be mad at each other. When do you fight?

Mother: [laughing] Who said we fought?

Me: Well, they say everybody fights. That’s what they tell me! So when do you fight?

Mother: We don’t know. We never had a fight so we don’t know when we fight.

Dad: Well, the reason we don’t fight is because your dad learned very early in our marriage that it doesn’t do any good to fight, because she always wins.

Me: What would you tell young people today is the secret to a long, happy marriage?

Me: More specifically about God? A lot of people who are Christians don’t have good marriages.

Mother: And they know God.

Me: So how would you respond to that? Because they would say, “Well, I trust in God. But I don’t have a good marriage.”

Me: Do you think that only people whose personalities don’t clash can have a good marriage?

Me: Here’s the thing. Marriage is going out of style. People don’t bother to get married. They just live together until they get tired of each other and then they move on. So I’m trying to determine, what is it that would make young people want to get married and have a successful, happy marriage.

Dad: Well, my thinking is that when you have a marriage that’s not successful someone’s not fulfilling their commitment. Something is causing that division. They say they love each other. But they’re not committed totally to each other. So many times.

Me: Yeah, I think that’s true.

Dad: Kinda like Mother says, that would produce a lack of communication. If you don’t have good communication, then you’re in trouble.

Me: Lyle and I were just talking the other day. We enjoy being together. We enjoy each other. That’s the example I learned from you, but there’s lots of marriage where you wouldn’t exactly say the people are having marriage problems, but they don’t enjoy each other.

Dad: Yeah, and that has to do with personality traits. When you have a situation like that, most people don’t get help working together as a team. Some marriages have to have help along that line. Now, your and Lyle’s personalities are alike. Mother and my personalities, to me, are alike. Even though I’m more high-energy and she’s laid back, but we blend. We work at our marriage. All the time.

Me: Don’t you think that has more to do with your commitment?

Me: I mean, to me, that’s what it is. The reason your personalities blend is because you’re committed to your relationship.

Dad: Yup. Commitment and communication are the two major things. Your communication really has to do with your commitment to each other. You have to have communication about finances and what are we doing and how are we making it and if you don’t have that… Even though people say, “I really love him, but…” There’s no buts to it. You have to be committed to the job of working at the marriage. It just doesn’t happen, you know.

Me: I, of course, have observed all this in your marriage… and in my marriage… but I thought it would be a good topic to bring up to offer encouragement to young people or to those who might be struggling in their marriages.

Me: It absolutely does.

Dad: One can’t be committed and the other half committed.

Me: It’s kinda funny. The other day I was trying to work through some upcoming topics for my blog. I’m trying to be more focused in what I write about. I asked Lyle what my focus should be. He said, “Marriage!” I don’t know what I have to say about marriage. I know what works for my marriage but I can’t say what would work for somebody else’s. But I think that those two things would be good for any marriage.

Dad: Well, that’s the bottom line. Otherwise you have confusion. If you don’t have good communication and commitment it produces confusion. The thing is, Mother and I go through a time of confusion sometimes that produces arguments and big fist fights, and then we sure do have a good time!

Me: I think you guys just think the making up part is more fun so you don’t even bother with the fighting.

Dad: (laughs) Well, you’re right about that! That’s not bad for two 75-year-old people, is it?

Me: That’s pretty cute. Well, did you have a good day?

Dad: Yep. Had a wonderful service this morning. Didn’t have very many people but we had a good Spirit. The preacher preached and we had singing. We did pretty good, I think. The Lord helped us.

Me: Did you preach today? [Dad’s the pastor but he has an assistant pastor so I wasn’t sure whose turn it was.]

Mother: Yeah, he did.

Mother: Part Two of your sermon that you started last Sunday?

Dad: Yeah. What was the title?

Mother: I don’t guess I got the title.

Dad: Lotta good it does me to preach!

Me: Well, you’re s’posed to announce the title! Say, “The title of today’s sermon is…” And then she’ll know.

Mother: See, that’s what he doesn’t do.

Mother: It’s “The Testing of Your Faith.” That’s the title.

Dad: She looked it up, Karla!

Mother: Did you get the email and see that I finished the cross-stitch?

Me: Yeah, I’m anxious to see the pictures.

Mother: I haven’t taken any pictures yet.

Dad: She did some quilting for Uncle Carlton this week. She and Uncle Carlton have been in there busy as little bees. [Uncle Carlton is another of Mother’s brothers, who happens to be their house guest right now.]

Me: Well, that’s good. They need to stay out of mischief.

Dad: Yeah, right. You get those two in mischief and it’s bad.

Mother: [laughing] Who would win?

Dad: [laughing] Is Lyle laughing at us?

Me: Yeah, he’s sitting over there smirking.

Dad: I thought he would be!

Me: Well, I guess that’s it. Y’all have a good evening.

Dad: Okay, sweetheart. I love you.