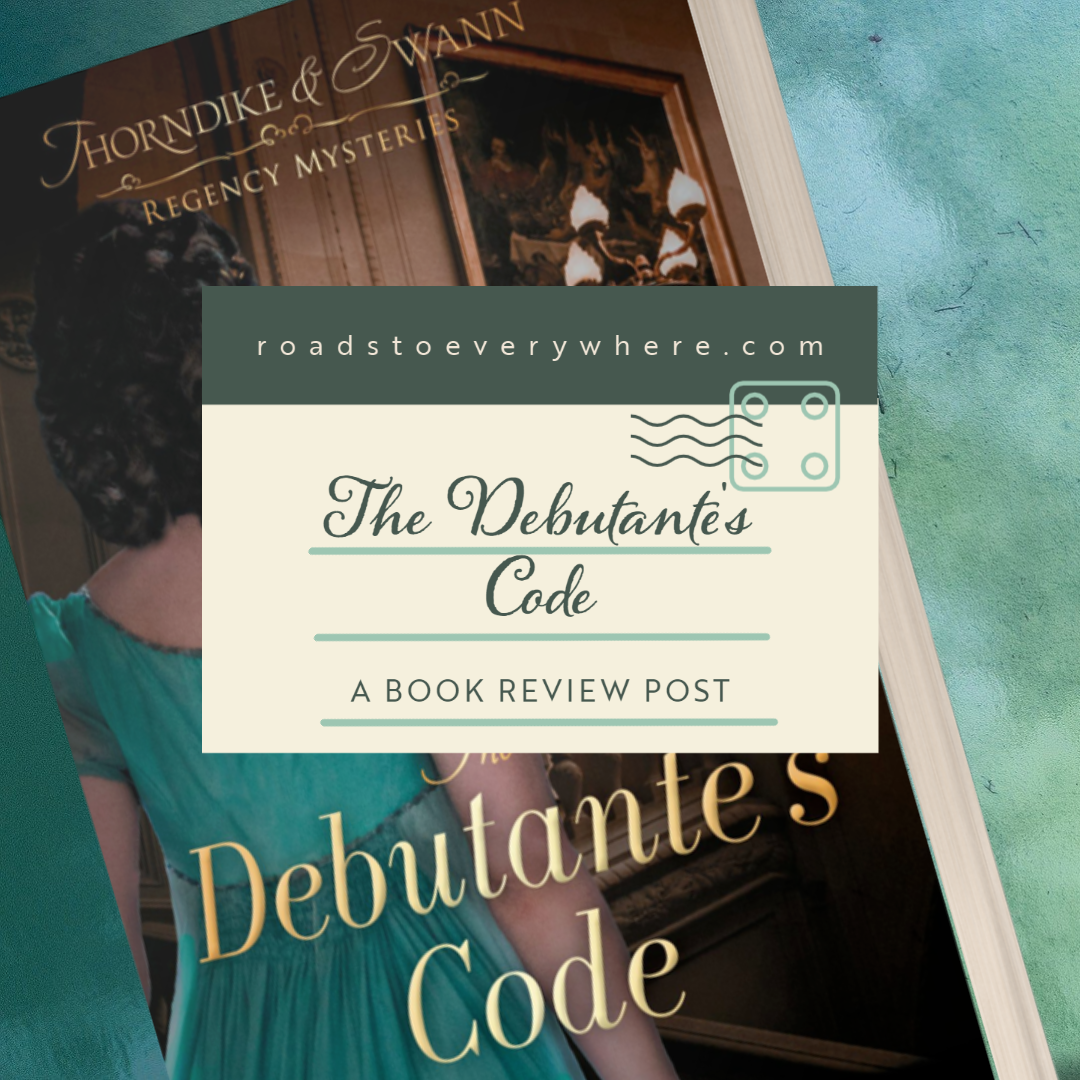 Disclosure: I received a complimentary copy from the publisher as part of Read with Audra blog tours.

Turns out, The Debutante’s Code is not your average Regency romance novel. Yes, it does include an element of romance, but I would classify it more as a cozy mystery. I enjoyed the intrigue, secret codes, hidden rooms, and all manner of espionage throughout the story. It was fun to try to figure out who Juliette should and shouldn’t trust as the plot unfolded.

If you enjoy Regency romances but are beginning to tire of the same ol’ plot, give this one a try. It definitely kept me turning the page.

The Debutante’s Code introduces readers to Lady Juliette Thorndike who has newly returned from finishing school and is ready to debut in London society. Thanks in part to her years away from home, Juliette hasn’t spent much time with her parents, and sees them only as the flighty, dilettante couple the other nobles love. But when they disappear and are not in London for her homecoming, she discovers she never really knew them at all.

Hurt and confused by her parents’ absence, Juliette is feeling abandoned not only by her parents, but by God as well. “We often form our views of a Heavenly Father from our experience with our earthly parents, for good or for ill,” Vetsch explains. “Juliette has not been ill-treated by her parents, or at least she didn’t think she had, but if they could abandon her on the eve of her coming out in society, can she trust anything about them? They’ve taught her that God is with her, that He will never abandon her, but can she trust what they have taught her when they can lie so easily?”

Through a trail of clues they left behind, Juliette soon discovers that her parents have been living double lives as government spies—and they’re only the latest in a long history of espionage that is the family’s legacy.

When given the opportunity to carry on that legacy, Lady Juliette is determined to continue their work. Mentored by her uncle, she plunges into the dangerous world of spies. From the glittering ballrooms of London to the fox hunts, regattas, and soirees of country high society, she must chase down hidden clues, solve the mysterious code her parents left behind, and stay out of danger. All the while, she has to keep her endeavors a secret from her best friend and her suitors—not to mention the nosy, irritatingly handsome Bow Street runner, who suspects her of a daring theft.

Daniel Swann has a mysterious past of his own. Now, he’s on the hunt for a stolen painting when other valuable pieces of art start disappearing one by one. Each clue leads him closer and closer to the thief and killer, but he’s disconcerted to find that his chief suspect is the debutante he finds so attractive.

Can Lady Juliette outwit her enemies and complete her parents’ last mission?

Juliette’s story has been a long one in the making for Vetsch who first started playing with the storyline idea ten years ago. The author originally imagined the story taking place in New York during the Gilded Age, but adapted it to the Regency Era. Although we’re inundated with TV and streaming programs that feature police procedures today, getting the details right for 1816 was a new adventure for Vetsch, “There was quite a bit of research involved in this one, from police procedures to art history. Much studying of maps and the hierarchy of society, the lives of British spies, and fitting it all into the political and social situations of the times. The Bow Street detectives didn’t have our current levels of forensic science to help identify culprits. They relied upon eyewitness testimony, circumstantial evidence, catching someone red-handed, and by following the paperwork/money trail. Some things have not changed though. The main motives for lawbreaking still fall into three categories: money, power, and sex. Who has it, who wants it, who wants to deny someone else from acquiring it? And in Regency times, the detectives were still looking for motive, means, and opportunity.”

Vetsch’s rollicking, exciting new series will continue in 2022 with the release of the Millstone of Doubt.