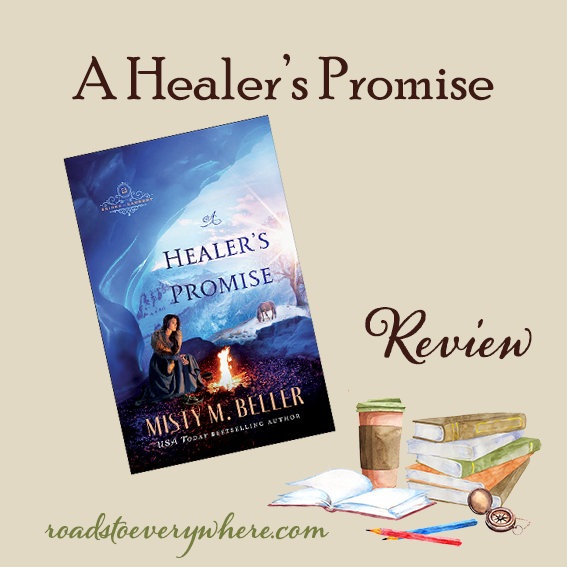 Today I’m sharing my review of A Healer’s Promise, a Christian historical novel by Misty M. Beller, published by Bethany House Publishers. It is Book 2 of the Brides of Laurent series.

A Healer’s Promise is set in a time and place I haven’t read much about. The focus is on a group of settlers who have carved out a network of “apartments” within a cave deep in the Canadian Rockies. I suppose that probably would provide better shelter for the brutal winters of that area than, say, primitive cabins. I didn’t understand how they ended up there and what made them stay in that place. I haven’t read the first book in the series, so maybe it’s explained better there.

The story revolves around the village herbalist (a young woman, Audrey) and an outsider (formerly a British spy in the War of 1812, Levi) who stumbles across the village. The two end up stranded in a winter storm together, and Levi is injured. Fortunately, Audrey has the skills (but not very much in the way of supplies) to help him recover.

She was called to be a healer, but her skills–and heart–have never been so challenged.

Levi Masters’s time as a British spy hasn’t ended, though his country’s war with America has. After overhearing a scout reveal a discovery that could give America the upper hand in future conflicts, Levi is sent on one last mission. While trekking through the Canadian Rockies in pursuit of his former enemy, he is taken captive by warriors from a hidden mountain village.

Village healer Audrey Moreau is more curious than afraid of the outsider, and she’s drawn to his commitment to honesty even at his own expense. Despite her arguments for his release, the council remains at an impasse. Compelled to help him escape, she sneaks him out of the village. But when Levi faces a life-threatening injury and the fierce mountain winter closes in, Levi and Audrey are forced to discover just how far they’ll go to ensure the safety of the other and the love growing between them.