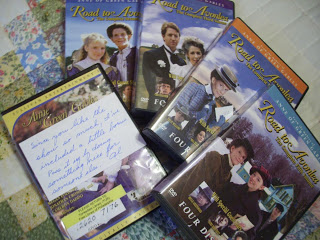 My family collects favorite television series on DVD. This way we can watch them whenever we like and not have to worry about commercials. Plus, some of the old shows are just better than what’s available nowadays. I know, that’s just my opinion… but I’m entitled to it, right?

About 3-and-a-half years ago I joined Swap-a-DVD (a sister site to Paperback Swap) and immediately began to build my wish list with series we were interested in collecting. At the top of my list was the Road to Avonlea series, based on L.M. Montgomery’s Chronicles of Avonlea. This series is kind of expensive to buy. I’m not sure why. Maybe because it’s Canadian?

Anyway, I was a “beta” member of Swap-a-DVD and happened to be the first person to request this series, so I have been at the top of the waiting list all this time. I was beginning to give up on ever getting these DVDs, but a couple of weeks ago I got a notification that two seasons were available. I had a few credits in reserve so I immediately ordered them. I was very excited when the first one came!

A few days later I got an email that two more seasons were now available. This time I had to transfer a few credits from Paperback Swap (I’m glad they have that option!) and then I ended up buying the last few credits I needed. Turns out they were all listed by the same guy. As he was getting ready to mail them he noticed that he had never mailed the second one, so he emailed me to apologize for the delay and let me know that he would be mailing the rest. I wrote back to thank him and told him how excited I was to receive this series after all this time.

Today the rest of the seasons came. Included in the package was a copy of the third Anne of Green Gables movie– which I didn’t already own! The guy who mailed them included a note saying that since I enjoyed the series so much he was just sending it as a bonus… and for me to just do something nice for someone else sometime. Wasn’t that just so thoughtful? I can do that!

I can’t wait to watch this series again. It’s been enough years that mostly I just remember the characters and locale, and not much about the plot. I know my girls will enjoy them, too!

If you’re an Anne of Green Gables fan, you’ll probably enjoy this special “Anne and Gilbert Valentine Video” I came across, too: